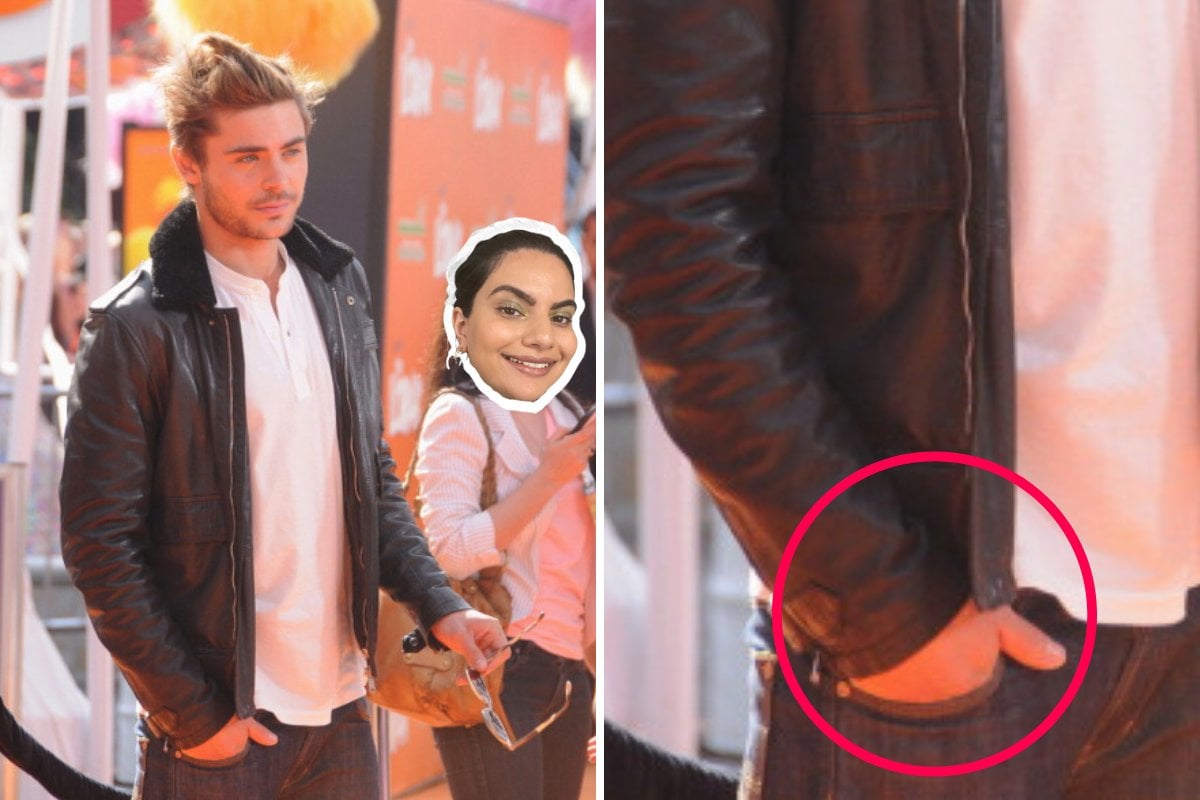 It’s 2012 and 24-year-old Zac Efron AKA the love of my life is at a movie premiere promoting his film The Lorax where he stars as 12-year-old Ted.

If you were born between 1990-2003, you would’ve definitely had a major crush on Zac Efron at some point. And by major, I mean you knew that this was the man who will one day fall in love with you.

2012 Zac Efron was peak Zac Efron. At the children’s movie premiere he’s wearing jeans so tight that I’m pretty sure they might cut off his blood circulation. He’s rocking the basic white T with a black leather jacket and Aviator sunnies like he just got back from spending a weekend away with Tom Cruise. Super hot.

Here’s where it all goes downhill for him. Zac is a cool guy, so he needs to do his cool guy poses - which as we all know is ‘the hands in pockets.’

As an expert in Zac Efron-ess I could tell that he wasn’t 100 per cent happy with the way he was nailing his poses. I’m guessing because his jeans are so tight, he had to empty his pockets so that his manly hands could fit in them nicely to continue the posing sequence.

He runs over to the other side of the red carpet to hand over what was in his pockets to who I’m guessing are the luckiest ushers in the world. Holding something from Zac Efron’s pockets is definitely the coolest thing that would have ever happened to them. As he takes his hand out of his pocket, something else falls out onto the ground. It was a condom.

ZAC EFRON DROPPED A CONDOM AT A CHILDREN’S MOVIE PREMIERE.

And it changed my life. 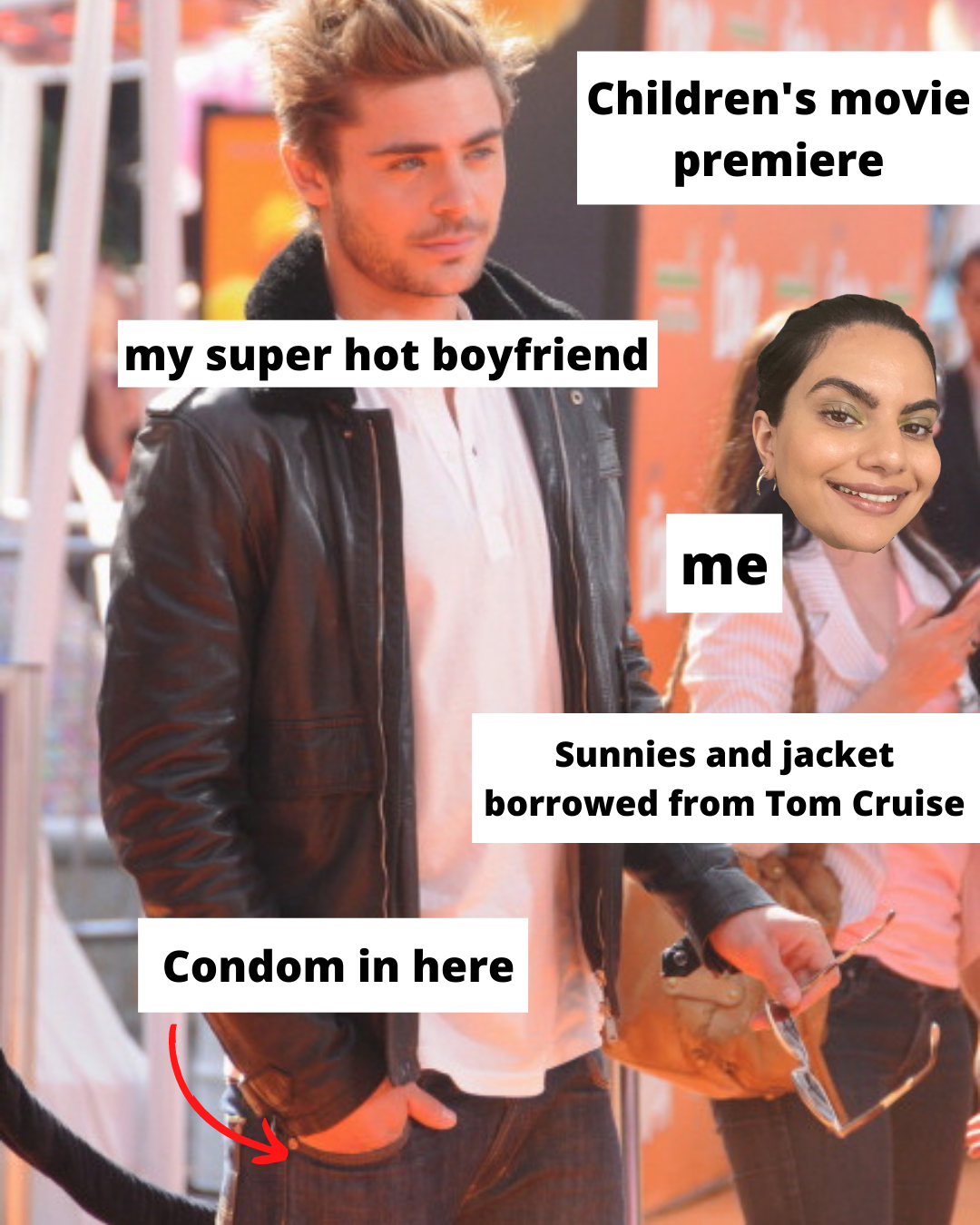 When this happened, I was 14 and on my school bus watching YouTube videos on my iPod touch. A video of Zac Efron was trending so of course I was going to watch what my future husband is up to.

According to my own eyes and ingrained core memory, the drop happened in slow motion.

A little tiny silver square (actually if it’s Zac Efron, it’s probably an above average silver square), reflecting the light from the press cameras gently flutters down onto the floor before he swiftly bends down to grab it and shove it back into his pocket.

Honestly, I probably wouldn’t have realised what it was if the video wasn’t titled:

My hear sank. Similarly to Zac, I also mouthed “omg” and I was omg-ing all the way to school.

To 14-year-old me, Zac Efron was still Troy Bolton from High School Musical. He liked to break out in song and dance at inappropriate moments; he was mediocre at basketball; he was confused about his future; HE WAS NOT HAVING SEX.

I remember that day at school so vividly because during our double math period (gross) all I could think about was, “He can’t be having sex, because I’m not having sex… And he’s meant to be my boyfriend”.

At that age, my whole life revolved around Zac Efron.

I imagined that at 16, I would go on a trip to the US with my family and he was going to run into me at a Starbucks and ask for my number. We would text every single day on Viber and he would write about how much he loved me on my Facebook wall for everyone to see.

At 18 I would convince my parents to let me move in with him in his LA mansion and I would do homeschooling to finish HSC.

At 21 we’d be married, we’d have two weddings (obviously) and we would sing 'Breaking Free' at the wedding reception together.

That’s where my dreams ended, because after 21, people become old and boring so there’s no use in pre-planning those years.

If you ever had a crush this intense when you were a teen, you would know that every little detail is dreamt about from the style of my wedding dress, to the layout of our penthouse apartment to even the little arguments we would have about work/life balance.

When the condom incident happened, it felt like I was going through my first heartbreak.

After that moment, I saw Zac Efron in a completely different light.

He was no longer starring in films as characters who were inappropriately much younger than his actual age like High School Musical, 17 Again and The Lorax (lol). He was now being cast in annoyingly age-appropriate roles like Bad Neighbours, Dirty Grandpa and Baywatch.

I think it’s pretty clear from the evidence I’ve provided that Zac Efron definitely dropped the condom on purpose to elevate his career. I mean.. Unless he was planning on doing the deed with one of his co-stars? I definitely could see him getting it on with Betty White.

Either way, all I know is that Zac didn’t just drop a condom that day, he also dropped a knife into my heart.