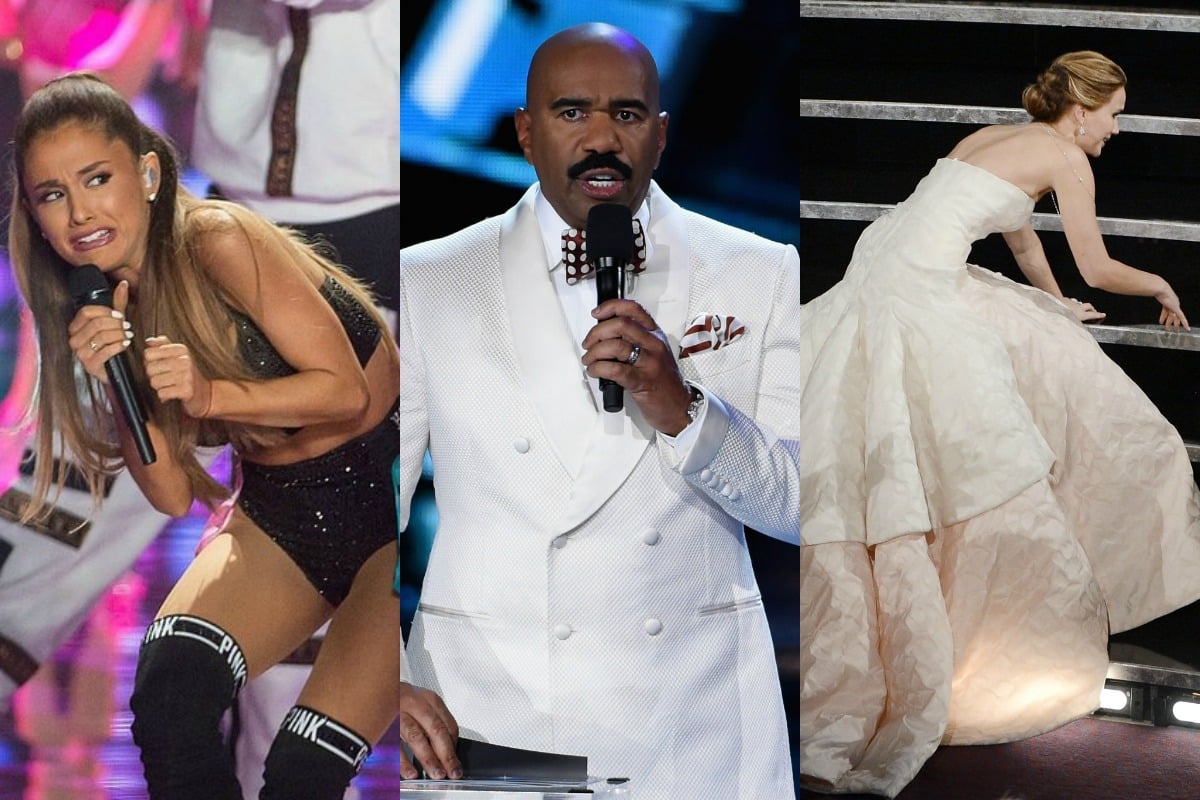 Ah, celebrities. It's easy to forget they're people too.

Then they do something so painfully awkward and cringeworthy that it makes us feel a little bit better about ourselves.

But while we're only reminded of our embarrassing moments while lying in bed late at night, celebrities' most uncomfortable mistakes live on the internet eternally.

Watch: The most awkward Aussie TV moments. Post continues below.

From award show mix-ups to outfit malfunctions, here are 13 of the most cringeworthy celebrity moments you probably forgot about.

Mariah Carey made headlines back in 2017 when her New Year's Eve performance in Times Square didn't exactly go to plan. The singer took to the stage for Dick Clark’s New Year’s Rockin’ Eve with Ryan Seacrest, but due to some technical difficulties, couldn't hear the music.

"Let the audience sing," she said while her prerecorded track started to play. "I’m trying to be a good sport here."

Fortunately, she later redeemed herself the following year for the 2018 New Year's Eve performance.

And now, for the grand finale, 2016 is taking out Mariah Carey live on stage pic.twitter.com/kfBJxXjepB

John Travolta is no stranger to award show blunders.

At the 2014 Oscars, the actor was supposed to introduce Idina Menzel before she sang Frozen's 'Let it Go', which was nominated for Best Original Song.

But when he took to the stage, Travolta completely mixed up the pronunciation of her name and instead introduced someone named "Adele Dazeem."

Throwback to John Travolta calling Idina Menzel "Adele Dazeem" at the #Oscars, one of the funniest moments in Oscar history. pic.twitter.com/ByxxImQh8U

A year later, Menzel ended up getting her revenge when she returned to the Oscar stage and introduced Travolta as her "very dear friend, Glom Gazingo."

Unfortunately, that wasn't the only time Travolta got confused on stage. In 2019 he presented the award for Video of the Year at the 2019 MTV VMAs and mistook RuPaul's Drag Race's Jade Jolie as Tayor Swift when Jolie and a group of drag queens accepted the award. The whole thing was painful to watch.

Three years on, Kesha's rejected hug from Jerry Seinfeld still sends a shiver down our spine.

In case you've scrubbed it from your memory, Seinfeld told Kesha three times that he didn't want to hug on a charity event red carpet in 2017.

4. Jennifer Lawrence's fall at the Oscars.

Jennifer Lawrence hasn't had the best luck at the Oscars.

At the 2013 ceremony, she went up to accept the award for Best Actress and tripped over her gown.

Thankfully, Lawrence ended up just laughing it off. The next year, she tripped over an orange traffic cone on the red carpet.

The year was 2017 and Bonnie and Clyde stars Faye Dunaway and Warren Beatty were presenting the final Oscar award of the night for Best Picture. The pair announced La La Land as the winner and the cast quickly took to the stage to present their speeches.

But then came one of the most awkward moments in award show history.

Producer Jordan Horowitz took to the microphone and announced that Moonlight had actually won the award. Everyone looked understandably confused as the cast walked on stage.

It was later explained that Beatty was given the wrong envelope. Instead of Best Picture, he was given the envelope for Best Actress, won by La La Land’s Emma Stone.

It's been 10 years since Sarah Murdoch accidently announced the wrong winner on Australia's Next Top Model and it still makes us feel uncomfortable.

When Kelsey Martinovich was celebrating her win (a.k.a a car, a New York modelling contract, a $25,000 ad campaign, $20,000 cash and the cover of a national magazine), Sarah Murdoch's jaw... dropped.

She had to interrupt the speeches to inform everyone that she announced the wrong name and Amanda War was actually the winner.

If there's ever a time you don't want a condom to fall out of our pocket, it's during a children's film premiere.

But that's exactly what happened to Zac Efron in 2012 when he was walking the carpet for the premiere of the animated film The Lorax.

The actor quickly noticed the condom on the ground and picked it up, trying to play it cool. Alas, the awkward moment was unfortunately caught on camera.

3. Condom falling out of Zac Efron’s pocket at The Lorax premiere pic.twitter.com/wrGEKSSWoj

Efron was later asked about the incident in an interview with The Today Show.

"You want to take me through what happened?" host Matt Lauer asked Efron.

"I don’t want to take you through it," he replied with a smile.

"I never really had a pocket-checking policy prior to going on the red carpet before, but now we fully instated one," he joked.

The then 24-year-old went on to say that the blunder was "a great message" about safe sex.

Madonna experienced a wardrobe malfunction at the 2015 BRIT Awards when she fell off the stage after a dancer ripped off her cape. The singer quickly got back up and continued her performance.

She later explained that the cape was too tight which caused her to fall backwards with so much momentum.

"It was a nightmare, I like to be amazing, I rehearse and rehearse so when I do a show it is effortless and I create magic," Madonna said on the Jonathan Ross Show.

"I did the opposite, I actually created a horror show for everyone."

In 2015, an interview with Demi Lovato for German radio station NRJ, quickly went viral when she was asked what her favourite dish was.

"I like mugs because they're very comfortable in your hand and they hold the hot things that you don't have to touch... so, um, you know, coffee or hot tea," she replied.

The awkward interview clip was shared over social media before Lovato explained that it was actually a joke.

"For anybody who actually thinks I misunderstood the "favourite dish" question – you clearly don't get my sense of humour," she wrote on Twitter.

Back in 2015, Nicki Minaj called out Miley Cyrus on stage at the VMAs after she made comments about her in an interview in the days leading up to the event.

Five years later, the incredibly uncomfortable moment still lives on as a meme.

11. When Ariana Grande was almost taken out at the Victoria's Secret Show.

Ariana Grande's performance at the 2014 Victoria's Secret fashion show was overshadowed by the fact she was almost taken out by the wings of model Elsa Hosk.

The moment later inspired some of the best memes. 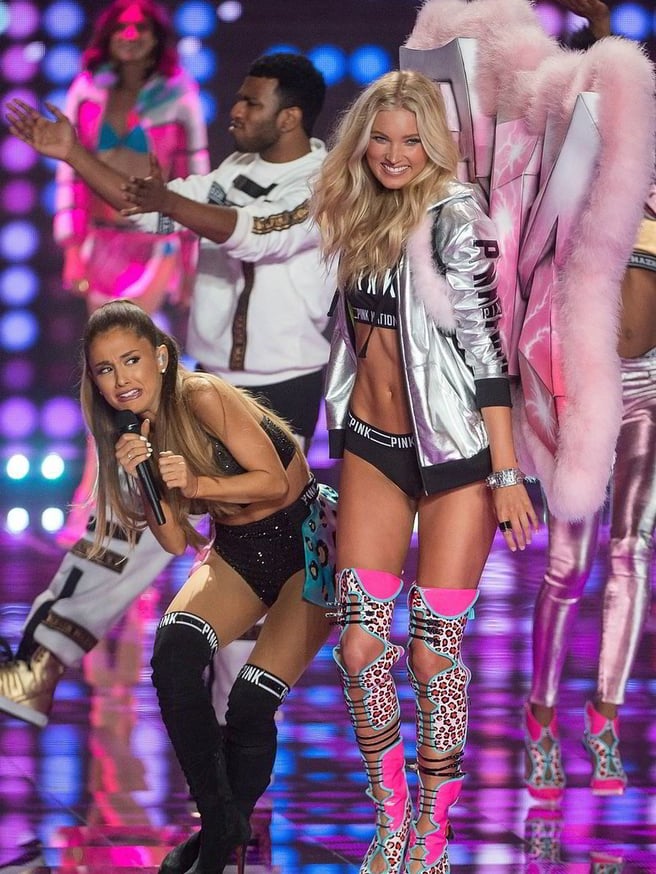 Who can forget Ashlee Simpson's Saturday Night Live performance in 2004?

When she began to perform 'Autobiography' as her second song of the performance, the vocals for 'Pieces of Me' began playing in the background, exposing the singer for lip-syncing her performance.

As her band continued to play in the background, Ashlee awkwardly froze up. She later broke out into a bizarre dance before walking off stage.

In the weeks that followed, the singer was hit with constant backlash, leading Ashlee to claim that she had acid reflux meaning she couldn’t sing live.

Last but not least we have Steve Harvey's awkward blunder at the 2015 Miss Universe pageant.

The host announced Miss Colombia, Ariadna Gutiérrez, as the winner. The 21-year-old model and TV presenter was awarded the crown, sash, and a bouquet of flowers.

But moments later, Harvey explained there have been a mix-up.

"I have to apologise, the first runner-up is Colombia," he said before showing the card to the camera.

"Let me just take control of this. This is exactly what’s on the card," he continued. "I will take responsibility for this. It was my mistake... horrible mistake." 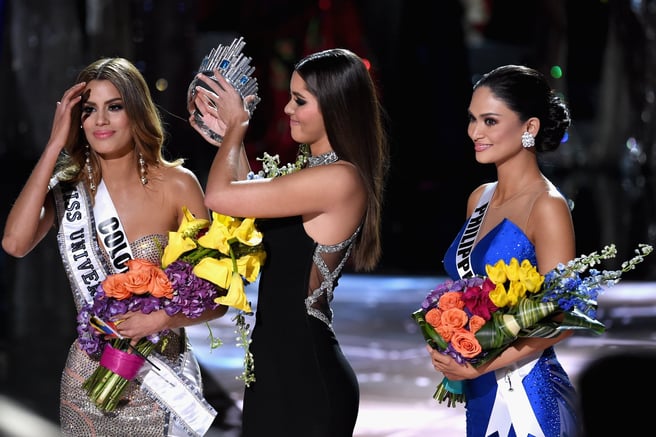 What other uncomfortable celebrity moments do you remember? Let us know in the comments below.

B
bittersweet a year ago