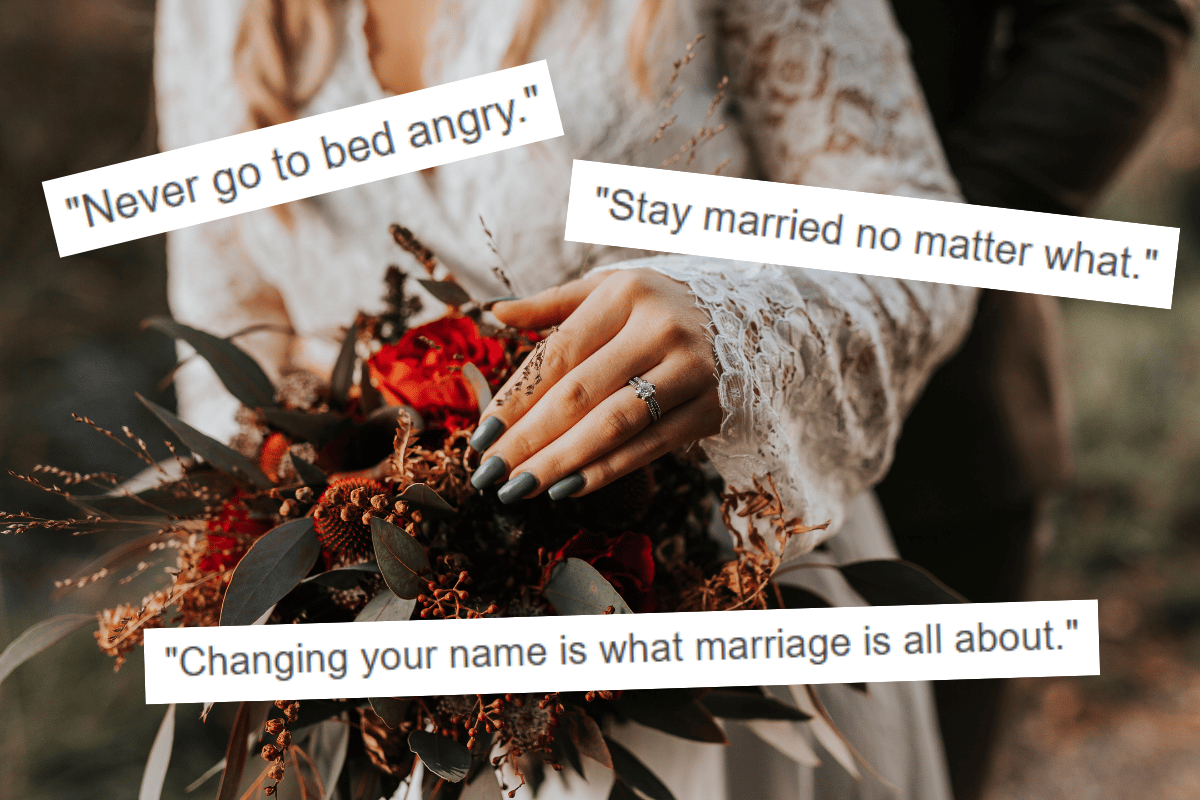 There's certainly no shortage of marriage advice to go around.

Even before tying the knot, couples are bombarded with unsolicited nuggets of wisdom from friends, strangers and especially that rogue aunty.

And while some may be genuinely helpful, others are unrealistic or just straight up... wrong.

So we decided to ask the Mamamia community to share their worst pieces of marriage advice they've ever been told. And boy, were there some doozies.

1. "'Make time for a date night once a fortnight.' We're both working full time with active socials lives and have a toddler and another one on the way, it's absolutely unrealistic."

2. "'Never go to bed angry.' Sometimes a break and distance from the argument can be far more productive than going round and round in circles. Especially if you're like my partner and I who are both very headstrong."

3. "'The first year of marriage is the hardest.' Not really. We had a baby a year before we got married, that was pretty hard. And now we have three and that's pretty hard. The year after we were married was pretty straight forward, actually."

4. "That you are always going to want to snuggle - hint, you won't but it doesn't mean you aren't still in love."

5. "'You've got to stay together for the kids.' If I followed this advice, I wouldn't be in the happy marriage I am now and the mum to two more kids."

6. "That you should marry a man. I love the men in my life but getting married to a woman was the right choice for me."

7. "I've heard from several older women that I should 'stay attractive for my husband'... I wasn't sure how to respond in all honesty. If I need to 'stay attractive' then so does he."

8."At my actual wedding reception while I was going around greeting guests, my great aunty pulled me aside and gave me a speech about name advice. I hyphenated my name with my husband's, and I don't go by Mrs, I go by Dr. And she decided to pass on the advice to stop doing that because women should really like to identify as a married woman, and by having silly titles and last names you'll never really feel like his wife. So she told me to get over myself and just spend 'a year or so' doing my thing before switching back to Mrs and taking his surname."

9. "'If he cheats on you it's because you are not giving him what he needs!'... I was told this just after we broke up by a co-worker. To say I was upset is an understatement!"

10. "'Stay married no matter what, because what is a woman without a husband.'... I'm a firm believer in divorce and women can be more than just wives (unless they choose to identify solely and strictly as somebody's wife - which is perfectly ok too)."

11. "'Your husband is the head of the house.' I was told this at my first wedding when I was 19 and as someone who has been the breadwinner in both my marriages, it continues to erk me now."

13. "I get a lot of 'you can't let him get away with...' as if it’s my choice how he thinks or feels about his own behaviour. For some it seems successful marriage is no more than obedience training."

14. Someone at the (old) RTA told me that changing my name is what marriage is all about. I was there to revert to my own name after a divorce. She was preaching to the wrong person that day!"

15. "Marriage is good for a couple of years and then you become like brother and sister."

16. "'The woman needs the security of marriage' huh? What security??"

17. "A friend was told by her mum, when she was having serious second thoughts, 'if you don't marry him, you might regret it. If you do and it turns out it's not right, you can always get a divorce'."

18. "My MIL suggested that I make sure to DARN his bloody socks. I did it once 30 years ago, then next time she asked why he had holes in his socks, I told her to feel free to darn them herself! Not my job!"

20. "At our wedding a couple in their sixties told us 'The first 40 years are the hardest.' I love that advice. It cracked me up."

What's the worst piece of marriage advice you've been told? Let us know in the comments below.

Reply
Upvote
I can't remember getting any advice before my first marriage when I was young and probably needed to be talked out of it. Before my 2nd marriage I had several friends telling me I hadn't got to know him long enough when I was older and wiser and just knew 100% it was right. 26 years later he's still the one. My advice now .......he needs to be your friend