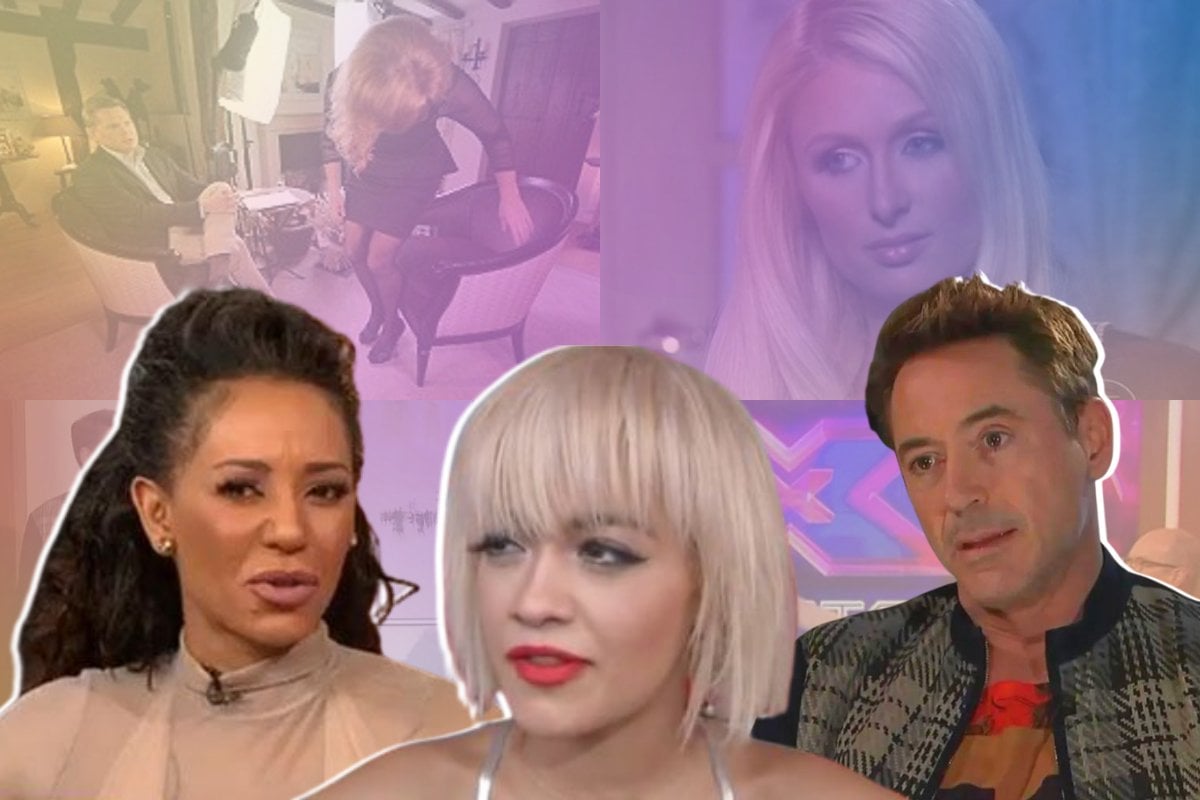 The relationship between media and celebrities is an interesting one. Mutually beneficial, each needs the other for promotion, fame and ultimately... money.

But that doesn't mean it's always a happy relationship.

Interviews are a standard part of a celebrity (and journalists') life. They come with the job - until you become Beyonce - and most go by without incident.

Watch: Okay, this didn't cause a celebrity walkout, but it made precisely everyone just as uncomfortable. Post continues below video.

The process of a celebrity interview is usually agreed upon well before the journo and the celeb meet face-to-face. There's lots of other people involved, and when it comes to promoting movies, TV shows and albums, it's usually agreed upon that questions don't stray too personal.

But all the planning in the world doesn't stop bad interviews. And gosh, there's something mesmerising about a bad interview (as long as you're not the reason it's going bad).

So simply because these scenarios are endlessly fascinating, here are six times celebrities walked out of interviews after a curly question or two.

Australian 60 Minutes journalist Michael Usher interviewed Sarah Ferguson, a.k.a Fergie, a.k.a the Duchess of York, in 2013, in what Channel Nine then promoted as "the weirdest interview you'll ever see".

That didn't disappoint. It was weird as hell.

During the interview, Fergie scoffed, rolled her eyes and even demanded producers delete segments. Then she eventually had enough and stormed out.

The issue? Usher had played her the now-infamous footage of her discussing cash-for-royal access with British newspaper News of the World.

Even more bizarrely? She returned and was so frosty for the rest of the chat, it was actually quite funny.

Paris Hilton is an icon, and she was not too pleased about her It Girl credentials being called into question during a 2011 interview with Good Morning America.

Reporter Dan Harris had come in swinging with a series of rough questions, including "Is it true that when you're not on camera that your voice drops and you're much more serious?" and "Do you worry at times that the people who have followed in your footsteps, like Kim Kardashian, are overshadowing you?"

Ooof. 2011 was a rough time in the Paris Hilton/Kim Kardashian friendship, and this wouldn't have helped.

By the time Harris asked "Do you ever worry about your moment having passed?", Hilton was totally over their conversation.

She looked around for a moment, obviously annoyed, sighed loudly and walked off camera.

Hilton eventually returned though, explaining (very flatly): "I've been in this business for 15 years now, so it's been a very long time, and just like any other businessperson or someone in the industry, it's always important to reinvent yourself and come up with new projects."

In 2016, Mel B was a judge on X Factor Australia, alongside Guy Sebastian, Adam Lambert and Iggy Azalea. Which is... fine, besides the fact that the media was intent on establishing a 'feud' between the two female judges. Sigh.

It came to a head when Mel B appeared on Sunrise one Monday morning, and was faced with relentless questions about it. 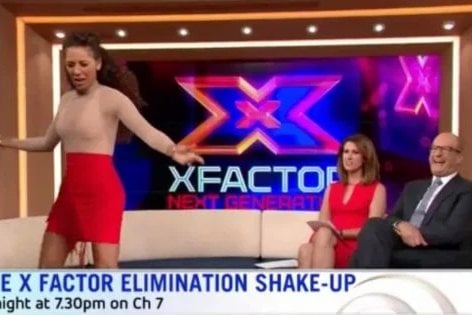 When presenter Natalie Barr asked if Mel B thought Azalea felt "scared and a bit threatened" by her late addition to the show, she responded, "Oh God, no."

"She's got a massive career, she's highly, highly successful. And we get on, so…" she added.

"Do you? Do you really?" pressed Barr, to which Mel B responded, "I know you're trying to get some rivalry between me and Iggy, but there isn't any."

Then David Koch chimed in to ask whether Azalea would be a good addition to the Spice Girls (?!?!), receiving a stern reply: "There's only five Spice Girls in the whole entire world, and that’s it, so ZIP IT."

By now, I would be well and truly terrified of mentioning Azalea to Mel B again (she is SCARY Spice after all), but Kochie was feeling brave.

"Don't miss Mel B on the X Factor," he said, wrapping up the segment. "It's the first elimination show tonight, at 7:30. How will she and Iggy get on?"

With this, Mel B stormed off set, causing the crew, Barr and Koch to erupt into laughter.

In April 2010, Naomi Campbell was being interviewed by ABC News, when she was asked about a diamond she had allegedly received from former Liberian dictator Charles Taylor.

"I didn't receive a diamond and I'm not going to speak about that," Campbell replied.

The reporter pressed on, and Campbell turned to someone off-camera (presumably her publicist) who said they would not be taking questions on this.

But still, the reporter tried.

Campbell then got up and walked out of the interview, pushing over a camera on her way out.

In 2015, Robert Downey Jr. sat down for a conversation with UK's Channel 4 News presenter Krishnan Guru-Murthy.

It was meant to be part of the Avengers promotional campaign, but Guru-Murthy got pretty personal, pretty fast.

He started asking Downey Jr. about his time in prison and quoted old interviews, which made the actor visibly uncomfortable.

Guru-Murthy then said Downey Jr. had spoken before about his relationship with his father, drinking and taking drugs previously, which led to the actor shaking his head and saying: "I'm sorry, I really don't... what are we doing?"

At that point, Downey Jr smiled, got up and waved goodbye.

Guru-Murthy defended the interview in The Guardian: "He could have engaged more with the earlier questions and I'd have never had time for the ones he didn't like. He could have played a dead bat with the serious stuff and the whole thing might have been dropped from the running order as too dull. He could have said he didn't want to talk about himself and I'd have tried another serious topic."

Downey Jr. later called him a "syphilitic parasite" and a "clown", who he felt he had to distance himself from.

"Otherwise I'm probably going to put hands on somebody and then there's a real story," he said.

Rita Ora and her ex Calvin Harris had a really bad breakup in 2014. There were rumours she had cheated, and he refused to give her legal permission to perform her song 'I Will Never Let You Down', which he had written and produced, at the Teen Choice Awards.

Ora had said she was disappointed, "because the show was going to be awesome and we put so much work and money into the show. I put my own money into the performance like I always do."

Then Harris tweeted: "But just know I had a damn good reason."

Obviously, that sent the rumour mill into overdrive, with many claiming they had worked on an entire album together that Harris now refused to release.

In August 2014, Ora attended a pretty innocuous perfume launch event and did some press. She spoke to the Associated Press about the product and her career in general, before the reporter started to ask about Harris.

"There's been a lot of rumours about Calvin Harris not releasing some of your stuff..." they said, to which, Ora politely smiled, said "thank you," and walked away without so much as a glance back.

Reply
Upvote
2 upvotes
This article reads a lot like "look at all these women being 'difficult'" - which rather perpetuates the stereotype that a woman  asserting herself or not putting up with bad behaviour is the problem.
B
beachhouse84 a year ago