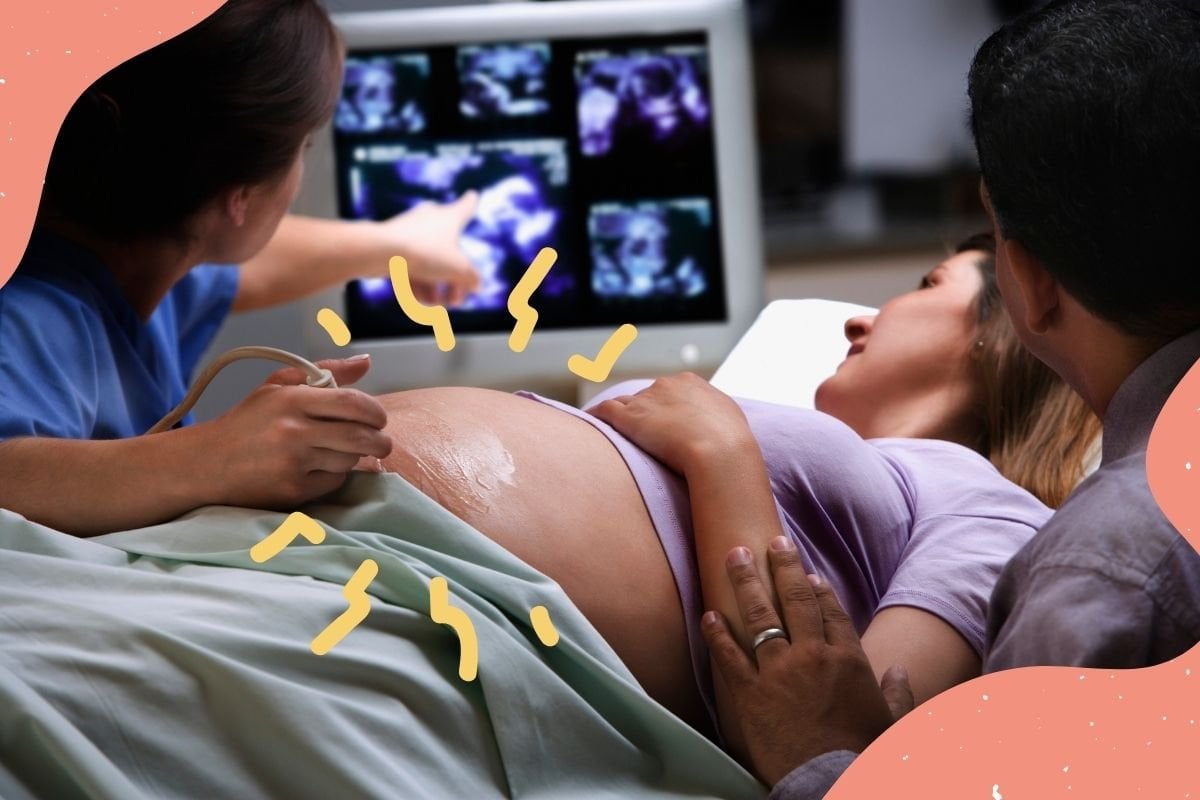 If you're a woman with a small tenant living in your uterus, chances are many people have already asked you: "Do you know what your having?"

And while gender reveal parties seem to be the new norm (the burst of blue or pink from balloons, cannons, piñatas, a casual explosion etc. etc.), finding out the sex of your baby isn't something everyone wants to do.

Watch: How to have a stylin' baby. Post continues below.

Some people enjoy the old school mystery of not knowing - that little bit of excitement in a world where everything is so, y'know, accessible.

So, what happens when you make it pretty clear that you don't want to find out your baby's gender and then someone... slips up?

Here's 16 women on the moment they accidentally found out their baby's gender.

Our poor doctor! I was referring to the baby as 'he' all the way through my pregnancy as that is what I felt I was having - but we didn’t want to know officially. During a routine scan in the rooms at 35-ish weeks, I said that ‘he’ has been having the hiccups a lot, and the doctor said: "Oh, so you know it’s a boy?".

My husband and I were like "umm.... no", and the doctor said "Hahaha that's good, cause that is just the umbilical cord", but it was a little obvious that we were in fact having a boy.

My husband and I didn’t speak about if for a week and then one night in bed he said "Do you think that the doctor slipped up?" and I was like "yeah". There are no hard feelings at all about it - my husband and I laugh about it!

It was my second babe and the person doing the scan just came out with, "It looks like you are having a beautiful baby girl!"

My OB knew I didn’t want to know the gender in my first pregnancy, however towards the end of my pregnancy during a scan he said "yeah, that’s a girl for sure."

At the time it only mildly bothered me because I was so unwell. However, during my second pregnancy I decided to find out the gender at the first opportunity so it couldn’t be spoilt again.

We already knew we were having a boy after the genetics scans, but at our 20 week scan, the first screen was of my son, from the bottom side with his legs widespread and an obvious penis. There was no mistaking it. The sonographer looked embarrassed and said that she hoped that we already knew what we were having.

My second child had an erection in the scan! We still have the picture. The nurses all passed it around. It was so funny!

I had all three of my pregnancies while living in Japan in the mid-late ‘90s. I was a fluent Japanese speaker. In Japan they do ultrasounds every month.

During my first pregnancy, I was unsure whether I wanted to know the gender or not. So.... I was getting my monthly ultrasound when the trainee doctor, who was accompanying my regular doctor, assumed I did not speak Japanese and said, “It’s a boy, isn’t it?"

The regular doctor stopped the ultrasound and said in a very clipped tone: “She speaks Japanese, idiot...”

All I could say was, “Well, I guess that answers my question about whether I should find out or not.” I never saw that trainee doctor again... and that boy of mine is now a 24-year-old young man.

I was having twins, and we already knew one was a boy but didn’t know the other twin’s gender at that time (I wasn’t at peace with having twin boys, so didn’t want to know about it at that stage!).

The specialist sonographer OB, who I had seen a lot for that pregnancy and a previous pregnancy and who I had also mixed with socially, said “he” when referring to the twin that we didn’t know was a “he”.

I called him out and said “Did you just say 'he'?”. He totally gaslighted me and was a bit abrupt and said “I've been doing this a long time and I know better than to tell people the gender when they dont know”. So I just shut up, as it was a bit awkward after that.

Anyway, my mum was with me during the appointment and when we got outside, she said “yeah, he totally said 'he'”. And sure enough, the "he" was a "he".

My boys are great and I wouldn’t change them for the world, and I was probably going to find out the gender of the second twin prior to their birth, but I was annoyed at the way the OB handled it.

I ended up finding out with my third and final bubba, after we got the harmony test done. I was planning to find out gender - but wanted to find out together with my hubby. I get to my appointment and before I could even say "Don’t tell me the sex", my regular doctor blurted out: "Oh, you must be happy a beautiful boy after two girls."

We had the genetic testing done, and I had called the clinic to find out if the results had returned so I could make an appointment to go through the report. The medical receptionist congratulated me telling me it was a boy. I was so shocked and upset.

I accidentally found out as they were about to cut me open! One nurse was leaving and said, "Enjoy your boy!" We didn’t know, so I was a bit upset it was ruined!

We moved to Singapore when I was seven months pregnant so I had to quickly line up an obstetrician. What I didn’t realise, was that my new obstetrician would have an ultrasound machine in their office and would scan me at every appointment. After seven months of not knowing what gender I was having, the obstetrician did the scan and announced: "He’s perfectly healthy.”

I moved to Colombia when I was three months pregnant and I found out very quickly that I was a definite minority in not wanting to know the gender. Here everyone finds out, names the baby and announces so they can get personalised things for the baby. Every single appointment I went to I was asked “Are you *sure* you don’t want to know?”

My friend told her doctor they didn’t want to know. She got the results back from harmony test and they got called in, which was scary as they thought something was wrong. A fill in doctor was there and said “So, it’s a boy”.

We went with the midwife program at our hospital so had our same wonderful midwife the whole way through who was perfect at keeping it a secret from us.

At about 35 weeks we needed to get an obstetrician to OK an extra scan we had that had picked up a minor medical issue. Within a second of seeing the obstetrician, she said "so we are having a boy are we?".

My husband and I must have looked dumbstruck, because she quickly said "Oh, I'm just guessing" and changed the subject. We kind of chose to ignore her, but low and behold our son was born a few weeks later.

I'm now pregnant again and we've learnt our lesson to make the first thing we say to any doctor/midwife/sonographer is that we don't know the gender.

We wanted a surprise with both our babies. I think it was around 20 weeks with our first and the scanner said “he”. I said, "Do you mean 'he' or 'she'?” And he went all awkward and red. Then at the hospital when they were preparing me for birth a nurse picked up my file and said, “When he arrives we will ...." and so surprise it was a boy!

With my second the scanner slipped up at the 16 week scan, as hard as she was trying to say 'baby' rather than 'he' or 'she'. I asked her a medical question which needed some thought, and when she returned to commentating the scan, she said “he” straight away - she never realised she did it.

The nurse said, "Well... there's something between its legs..." and with my look of horror (I didn’t want to know), went on to say, "but the penis and vagina look very similar at this stage, so it just means there’s healthy genitals."

Have you ever experience an accidental gender reveal? Share your story with us in the comment section below.