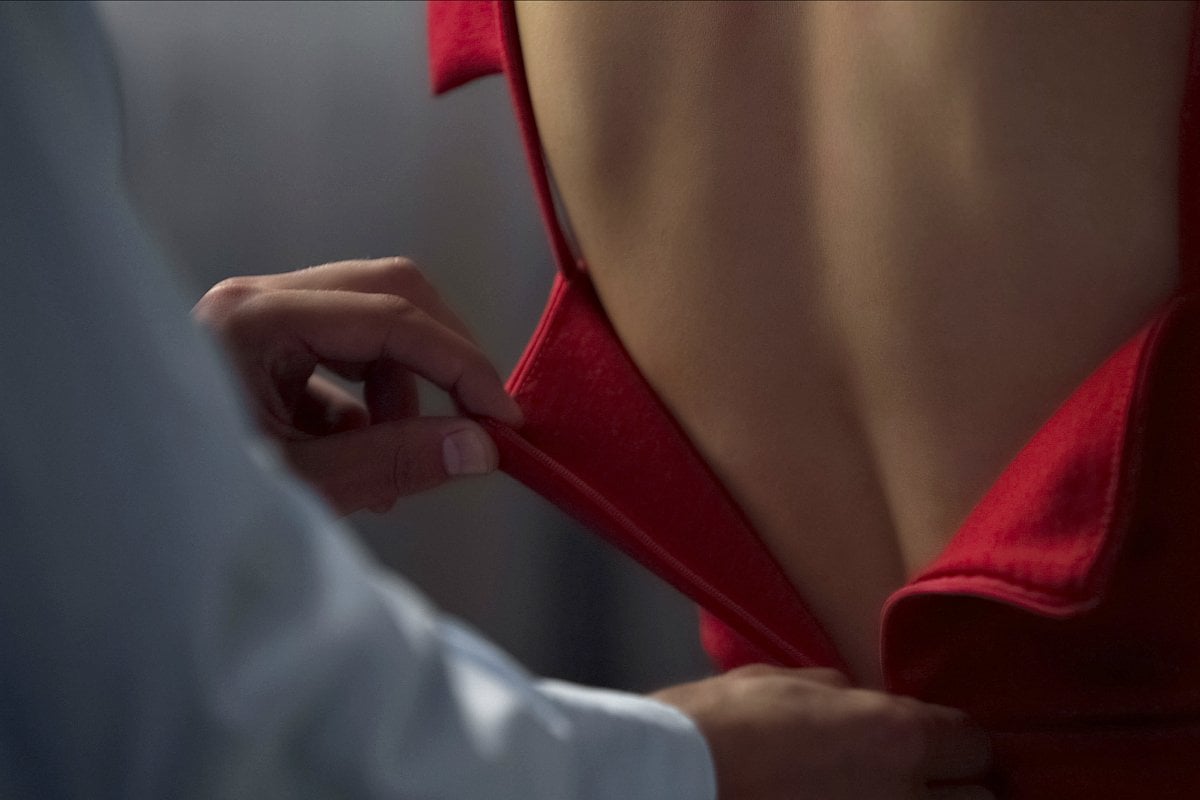 About two years ago, Breanna* sought some hands-on education for her sex life. She wanted to improve certain skills and learn new techniques, particularly for giving oral sex.

So, like a growing number of Australian women, she sought the services of an escort.

His name is John Oh.

"I did some research and tried to find somebody who offered [instruction]. And I came across John's profile," Breanna told Mamamia's daily current affairs podcast, The Quicky.

"I think research is the key; [I] really looked into every aspect of what was said on his website and decided that I'd start off there."

She booked a two-hour session, nervous and not sure what to expect. But it proved fruitful: "It was really good at giving me some different skills and confidence in an area that I hadn't had that confidence in before."

Watch: Your questions about escorts, answered by Samantha X.

John, a former IT entrepreneur, told The Quicky that while the market of male escorts who cater to women is relatively small, they are more accessible than ever before.

"My business grew, basically, in line with the uptake of smartphones and tablets," he said. "Because prior to the iPhone, most women didn't really have any private, secure means of doing the research to try to find a male worker. They we're limited to a family computer or work computer, generally. And that made it incredibly difficult."

John says his clients have typically spent one to two months researching him — visiting his site over and over — before they make a booking.

"I have spent a lot of time over the last 10 years writing content for my website, making films so forth. And I do that because it lets women who might be interested in using my services, get a genuine feel for who I am," he said. "I want anyone who makes a booking with me to walk through the door and after five minutes' conversation, think, 'Yeah, he's the person that I had pictured.'"

He says his prices are "somewhere in the middle" of the market at $600 for a two-hour session or $1000 for a four-hour evening booking.

Recent research from the University of NSW found that Australian women access sex workers for a diverse range of reasons.

Approximately half said their most common motivation was therapeutic (such as exploring their sexuality after experiences of abuse, intimate partner violence or painful sex), while others were simply seeking sexual pleasure, or intimacy that comes with clear boundaries.

"They were excited to express the pleasure they had experienced and the unexpected boost to their self-esteem and mental health," she said.

"They spoke about learning about specific acts, their bodies, and their sexuality which they felt gave them more power to negotiate future sexual encounters."

That was certainly the case for Breanna.

Like the respondents to the NSW study, she soon realised the payoff wasn't just sexual.

"I had a lot of issues going on around that time; some workplace experiences that weren't going very well. I had a lot of battering of my own confidence," she said. "And I feel like my confidence in myself was restored in quite a few ways by having a bodily confidence, which is something that I probably didn't have for several years."

In fact, after that first visit she booked again, and again — roughly one session every six weeks. It continued to be educational for a while, but later transitioned into full sex.

"It definitely wasn't crossing any of my boundaries," she said. "I sort of went into it rationally and thought, 'Yeah, okay, why not?' And it was very enjoyable. So that continued to be an element and then switched into the main reason for continuing to see John."

The intimacy they share, she says, is purely physical.

"I'm definitely able to delineate between the fact that I'm going there for a very physical experience," she said. "I haven't had an issue where I obsess about the non-physical aspects of those interactions at all.

"But I think that's very much a personality thing. And I can see that some people might struggle with that."

The veil of silence.

Breanna has been in a relationship throughout her encounters with John.

Her partner doesn't know about them.

"He's not actually aware of it," she said. "[I] reconcile that that's something that I need for myself.

"I think it's really just a personal choice. I mean, as I said, it really does positively impact my confidence in myself as a woman. So it is something that I can rationalise and justify to myself, which does not mean that I'm open about it, obviously, because there is that outside stigma."

This goes a long way to propping up a culture of stigma around people who access or perform sex work. Particularly, John says, if they are a woman.

"When someone finds out that I'm a sex worker, it's like, 'Oh, that's interesting. That's cool.' For a woman who's a sex worker, there's already a stereotype and a negative association in our culture. So it makes it much harder for them," he said.

"Male privilege is a thing. And it extends even into this industry."

Reply
Upvote
Even if you argue that it started off therapeutically, once it became about the pleasure then a line has definitely been crossed. It is sad that her relationship isn't a space where she feels that they can talk about this sort of thing and explore it together.
R
rush 2 years ago