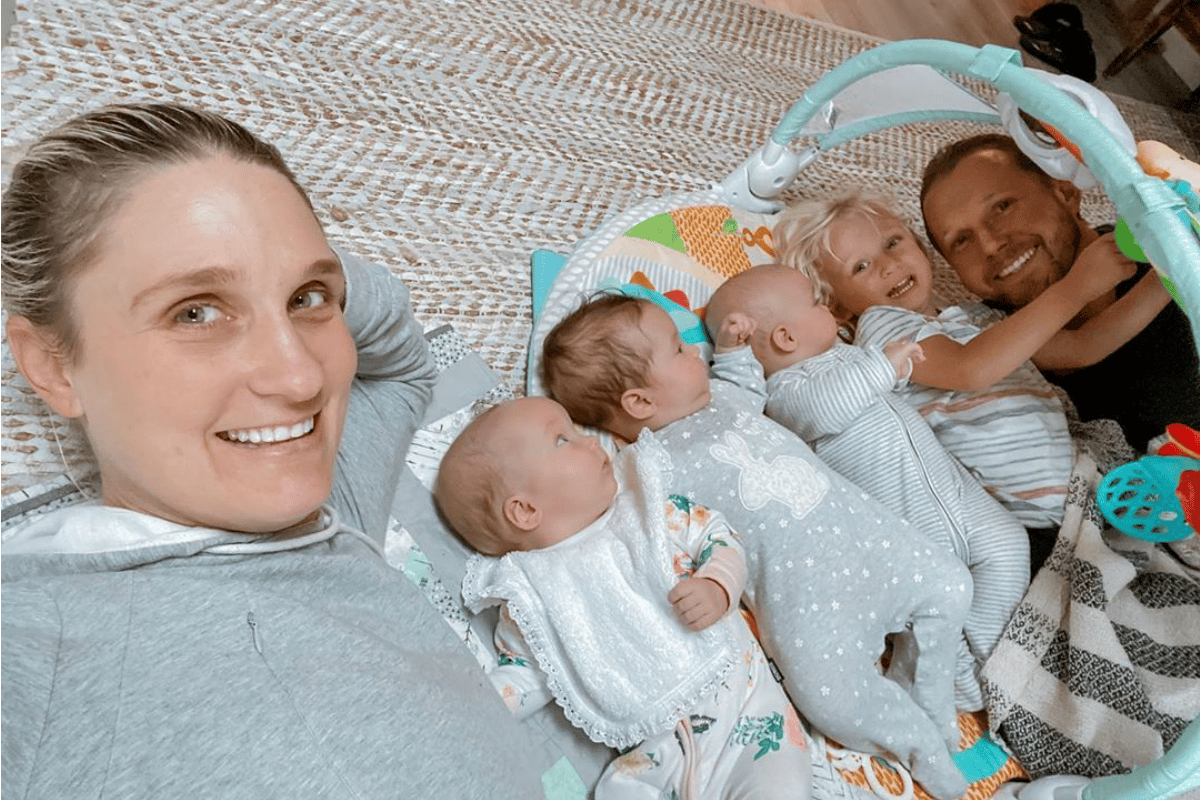 Eight months in and Lisa Rope still can't quite believe she has triplets.

Actually, scrap that. She can't quite believe she is a mother of four tiny humans under three years old.

The 38-year-old from Sydney is the kind of person many assume doesn't even have one child, let alone four. But here she is deep in a world of nappies and schedules and bloody loving it, chaos and all.

WATCH: The horoscopes as new mums. Post continues after video.

When the sonographer showed her and husband Brad, 37, the three heartbeats in her belly there were a lot of "profanities that came out between the both of us," she told Mamamia.

Amongst the swearing and laughing, she remembered spluttering at him: "But I just bought a new car? We're going to need a new car??"

But once the initial shock had settled the real nerves set in. How were they going to afford this? What about our son? How do you even... do triplets?

One week in with our little girl tribe and I finally got to cuddle all three at once last night!!! 💗💗💗 It’s been a surreal week and we are getting to know their individual personalities every day! 😍😍😍 RUBY- our oldest, smallest and most serious. She looked after her sisters in the womb handing over food and space (if Airlie had her way they would have been born way earlier but Ruby manned the forte and blocked the exit!). She’s still worrying about them now and always looks concerned. I guess I would be too if I had copped a vom on the back of the head (twice) from my younger sister (not saying who but you should be able to guess!) 😳🧚🏻‍♀️ AIRLIE- the ringleader, trouble maker and pace setter. If Airlie is up we’re all up! Weighing in at birth a whole 1KG more than her sisters Airlie has been calling the shots from the womb and beyond! A head of dark hair and impressive vocals- she doesn’t mind booting her sisters out of the way in the cot and absolutely refuses to share boob time- preferring instead to act like a single child and feed alone 🤦🏼‍♀️🙄 (for perspective she was also on 40ml feeds whilst Ruby was back on 7ml!) 💪🏻🍼 PALOMA- the ultimate cruiser. Has not had an ounce of assistance since birth- no breathing assistance, no light therapy- just casually strolling through life from the second she was born! Not much bigger than Ruby, Paloma may raise an eyelid at you before she flutters off to sleep again with a great big stretch and basically has no time for the boob- would be happy to be tube fed til her 18th birthday probably! 🤷🏼‍♀️🦄

The answer: routine, and an amazing village of medical professionals, family and friends.

The moment Lisa left that sonographer's office she was on the phone to the obstetrician who'd delivered Xavier, her now three-year-old.

"You better not be on holidays when I deliver these babies," she told him. But she needn't have worried because Lisa ended up having a great pregnancy and delivery, despite being high risk.

"I was so well looked after. I did Pilates up until the week before. I only missed one week during my entire pregnancy. It really helped me - not for fitness but for keeping my body strong and stretched," she explained.

﻿Walking into her planned caesarean at 35 weeks, Lisa was expecting the worst because the medical staff had "put the fear of God into us." But having already had a tour of the NICU ward in preparation, it didn't feel so scary when their girls ended up in there for their first month of life.

Months down the track Lisa and Brad have perfected a - not to be messed with under any circumstances - daily schedule.

"Our parents offer to mind the kids so we can go have lunch out. But we have such a good routine, that it's almost not worth disrupting it to go for lunch. There's going to be beautiful times ahead... but at the moment it's a strict schedule with calendars and whiteboards," Brad told Mamamia.

"There isn't much time for us, I won't lie," added Lisa. "My sister asked me if I had checked with Brad about something we'd been discussing recently and I had to think to myself 'I actually haven't really seen Brad lately.' Even though he's physically here, we're in kinda like work mode."

The days that Brad goes to work Lisa's mum comes over to help. You need at least two people at home at a time to have enough hands to look after four kids under three.

The triplets have naps timed at 9am, 12:30pm, sometimes 4pm, and then bedtime at 7pm. They don't get a choice, they all have to go down and wake up together.

"You have to keep them in the same routine, otherwise you'd just be constantly feeding. They do everything together... we don't let them have their own patterns," Lisa said.

﻿Her other trick is two-course meals for lunch and dinner.

✨TEAMWORK MAKES THE DREAM WORK✨ Dads on duty to get those greens 🥬 into the girls and his trusty side kick Xavier’s on hand for moral support! Best #girldad actually make that #dad ever 🥰 @brad_rope ⬆️ stories on the process 😂 #multiples #triplets #tripletsofinstagram #mumoftriplets #familyofsix

The babies also have milk﻿﻿ (two are breastfed while the third gets a bottle) at 7am, 12pm, 3pm, 6pm and 9:30pm, and then they sleep through the night until about 6am. The triplets have slept through the night since about six months old which has been beyond transformative for the whole family.

"I was convinced when I was pregnant, it would have been easier if I hadn't had my older child so I wouldn't know what to expect. But I think having the first gave me more experience to know what to do. I was a bit more sure of myself. The googling and things you do with your first baby sending yourself mad... I trusted myself a bit more this time," Lisa told Mamamia.

The coronavirus pandemic has actually been great for the mum guilt.

"It meant I was able to be in a bit of a bubble," she said. "While it's nice to have people over, just having those few people around without too many opinions allowed me to just keep to my routine."

Lisa worried that the triplets wouldn't get "as much time outside at the park and in the world" as other kids because logistically it's a nightmare. But the virus means she doesn't have to worry about that so much.

I will say through this whole isolation ‘thing’ the silver lining has been a shift in perspective and a stronger appreciation of your loved ones. Even if you are in isolation with your kids and they are driving you batshit crazy 😝 - it’s a chance for a few more hugs 🤗 and a few more memories to be made (if you can remind yourself this next time they are drawing on the walls or putting credit cards into microwaves to explode 🤬 *true story then bonus points to you). Today felt like the perfect day to snuggle in with the crew in our @lactivewear matching hoodies and appreciate the change of season. Sometimes it’s nice to just cuddle in tight and not leave the house (like everyday right now 😜). P.S any breast feeding mummas flick to last image to check out the breastfeeding option 🍼🍼🍼 of this jumper- I’m basically living in it right now!

Having triplets also seems to have rallied her family and friends in a way she didn't expect.

"﻿So many of our friends have come and done night shift. One even bought a massage table to my house and gave me a massage. I would come back from a doctor's appointment to groceries on the doorstep. I think the girls have touched a lot of people. It's just so unique... people are just so invested in their and our happiness," said Lisa.

Of course, there have been hiccups. Xavier had a few months of acting out dying for attention - but a new kindergarten helped that.

There were also a rough couple of weeks as the triplets' stomachs were getting used to different foods. But Lisa says they've hit a good patch now.

"We're coming to a nice time now, where they are eating food and their strong personalities are coming through and they're starting to engage with each other. I catch them holding each other's hands... they're so sweet and they're such good babies. I've been really lucky," she said.

🌻 8 Months today 🌻 I have no words- literally no words as to how they have been here for so long! 🤷🏼‍♀️ Tomorrow makes exactly 35 weeks in the belly and 35 weeks earth side... again... how!? I really wanted to give a personality update which I have been meaning to do for awhile now so here goes!... Ruby Havana, Baby A. Still our patient and most ‘sweet child’. 🍒 Like everything about her is ‘sweet’. Her rosy cheeks, her little cry (unless you have pushed her patience too far then watch out her scream is piercing!). She wakes up from the most peaceful sleep and just turns her head and looks up at you- and smiles💕. Every single time. She is showing no inclination to crawl as she is content wherever you put her! 💆🏼‍♀️I will say- do not judge her however by her size (smallest) as she is the biggest eater! Airlie Helena, Baby B. Still holds a solid kg or more on the other pair but as big as her bootie is- her hearts bigger💗 Often you’ll find her reaching out for the hands of her sisters whether it’s to calm them or just let them know she’s there 💃. Her smile when she bothers to flash it is a million rainbows 🌈 her dance moves are even better (picture a cockatoo 🦜)otherwise she’s the most solemn child you’ll ever have met and prefers to sleep whenever she can! Paloma Rain, Baby C. Well- she made a name for herself in the womb and she does not disappoint 🤡 Preferring to think of herself as a ‘single child’ don’t dare leave the room without her because this girl has serious FOMO and doesn’t want to miss a thing! 🌪 Her strong determination is matched by her physical strength and I think she’ll run before she can crawl! 🏃🏽‍♀️ She just wants to be one of the big kids and I’m constantly finding her rolling around wherever she shouldn’t be as she tries to keep up! 🕺🏼 Happy 8 months baby girls- where would we be without you 🥰🥰🥰 P.S please notice the hand holding of Paloma and Airlie 😍

Looking back, Lisa's advice for any future triplet mums-to-be: "Really look after yourself. Find the thing that is good for you, your body and soul (mine was Pilates). Keep strong and healthy and get a good village around you who you trust. My obstetrician is like my dad now."

Oh, and get ready to be asked by every stranger/barista/shop assistant/human you meet: "But... how do you do it."

Reply
Upvote
A woman in the same ward as my ex wife had triplets from her first pregnancy. She was also paraplegic 😲.
R
rush 2 years ago

There were also a rough couple of weeks as the triplets' stomachs were getting used to different foods.