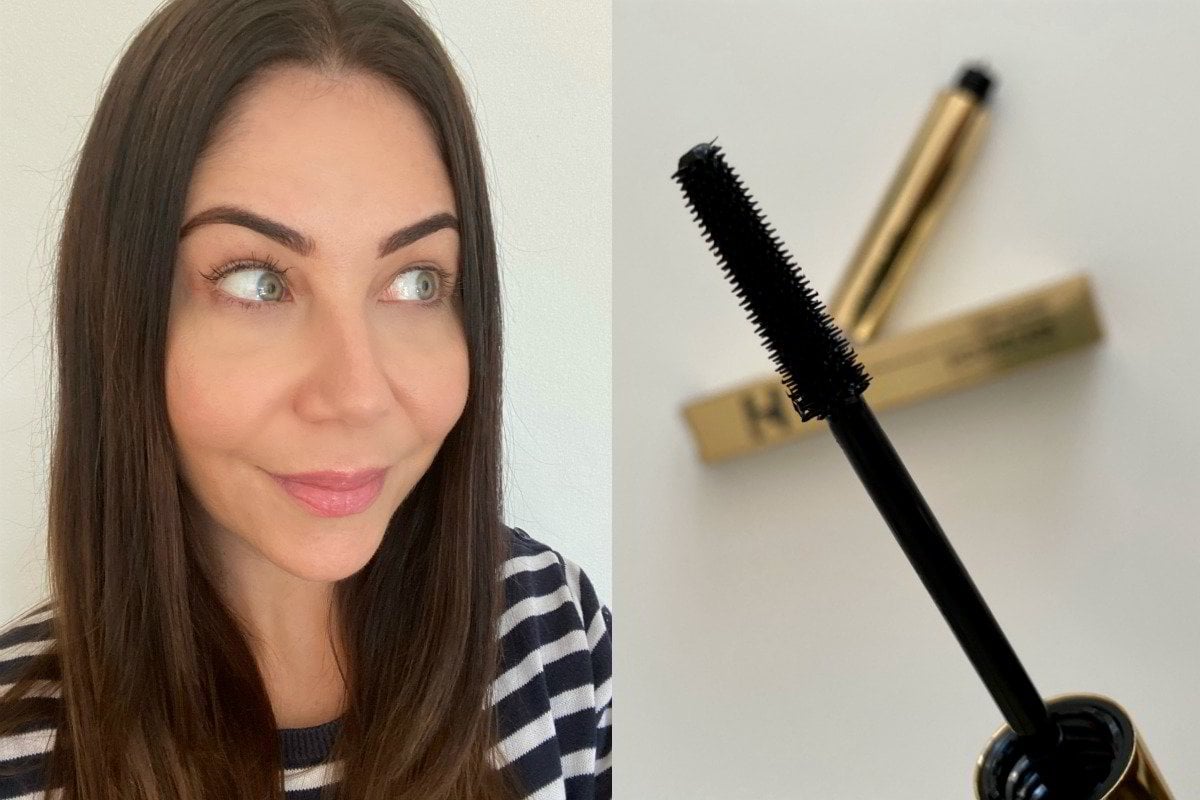 In Mamamia’s Road Test series, real women road test the latest trends, treatments and techniques you need to know about - and share their honest thoughts. If it's out there, you can bet we've tried it.

You might think that tubing mascara is mascara that comes in a tube. I can see why you would think that, because lots of beauty products come in tubes. But you’re wrong.

A tubing (sometimes also called tubular) mascara is much cooler and more clever than that.

It’s actually a formula that creates teeny tiny ‘tubes’ around each of your eyelashes as it sets. It does this for two reasons;

First, so you don’t get flakes falling on your cheeks, or smudges under your eyes, or any sort of panda eye situations in general.

Second, and this is the really cool bit - for how it is removed. When you take it off it essentially ‘slides’ off your lashes in very small tubes, meaning there’s no tugging, pulling or aggressive wiping. It’s much more gentle to both your lashes themselves and the eye area skin, too.

Weirdly, there’s not that many tubular mascaras around, which I think is a crying shame. So when a new one launches I get all giddy with excitement to give it a go.

The latest, which just launched, is the Hourglass Cosmetics Unlocked Mascara, $46. Hourglass are the people who blessed us with Ambient Light finishing powders (AKA a filter for your face but IRL), so we know they do good stuff.

The brush is my favourite type - the bendy plastic kind with the short and stumpy (but fine) bristles, so you can get into every nook and cranny (i.e. your inner corner and outer lashes). The formula itself is a rich black and quite moist, meaning you've got a generous amount of time to work on your coats before it dries. 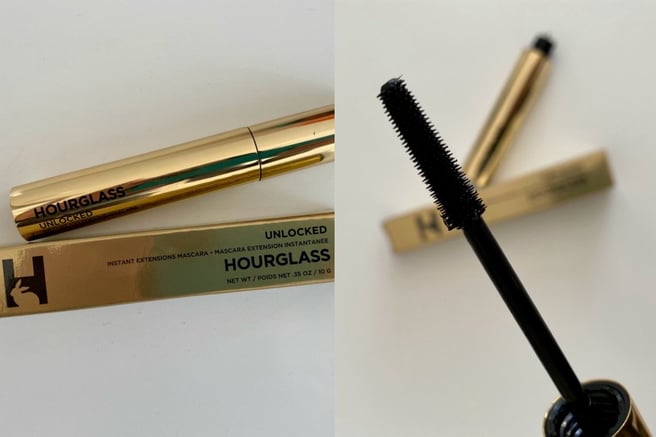 Its tagline is ‘Instant Extensions Mascara’, and while it’s absolutely lengthening and defining, I wouldn't say it’s the most volumising mascara I’ve ever used. I quite like that though - it gave enough ‘oomph’ but without looking like I a had trillions of layers of makeup on.

I’ve decided it’s great for an everyday, and the option is there to build it up if you want to go bigger. It was true to its promise, too - not flaking or smudging at all throughout a 14 hour day.

Before and after lashes on the effortless @rosiehw using @hourglasscosmetics new Unlocked Mascara. ✨ If it's good enough for Rosie... #MECCAmoment 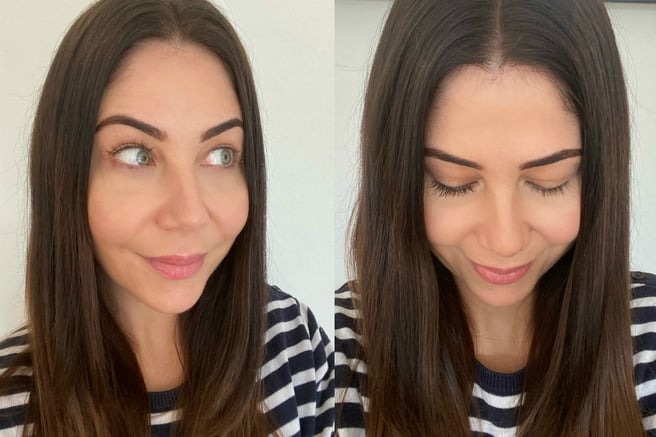 I know it’s hard to tell which one is me. I’m the brunette. Image: Supplied.

The true joy came when it was time to take my makeup off. Ordinarily I remove my mascara with a cotton pad and micellar water, but with tubing formulas I just wet my fingers (yes, with water) and gently slide my thumb and pointer finger along my lashes to pull the tubes off. 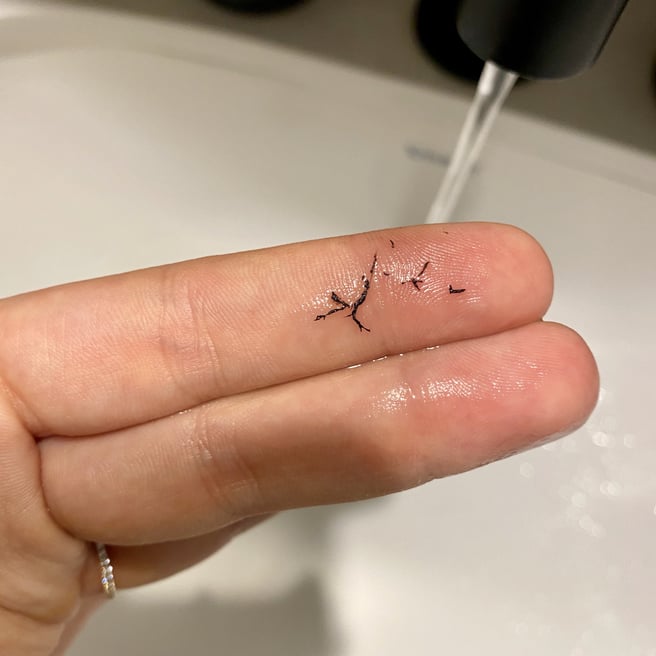 Fun, huh!? No more rubbing at your eyes, and in turn, less lash breakage. And now you’re wondering which other mascaras are tubing, aren't you? Here’s a handy list.

What's your favourite tubing mascara? Let us know in the comments below.

Reply
Upvote
Why try anything else when MCo does the job perfectly!?
M
mamamia-user-680043716 a year ago

Reply
Upvote
I've tried them all, and keep going back to Blinc as its the best I find - I'm super keen to try the HourGlass one though as the Blinc one can be hard to track down (its regularly out of stock seemingly everywhere!) David Jones stock it, but its out of a stock a lot there, or from online retailers.
I was sadly very disappointed by both the Model Co and the Kevin Aucion ones, they clumped lots I found and didn't give me much/any length and/or volume, whereas when I wear Blinc I get so many compliments on my lashes (they look amazing but really real) which I find bizarre, but nice.
News
General
Opinion
True Crime
Politics
Sport
Explainer
Entertainment
Celebrity
Reality TV
Movies
TV
Books
Rogue
Royal
Lifestyle
Beauty
Fashion
Weddings
Home
Wellness
Health
Fitness
Travel
Food
Parents
Before The Bump
Pregnancy
Baby
Kids
Teens
School
Parent Opinion
Work & Money
Money
Finance
Career
Lady Startup
Relationships
Sex
Dating
Separation
Friendship
Family
Real Life
Couples