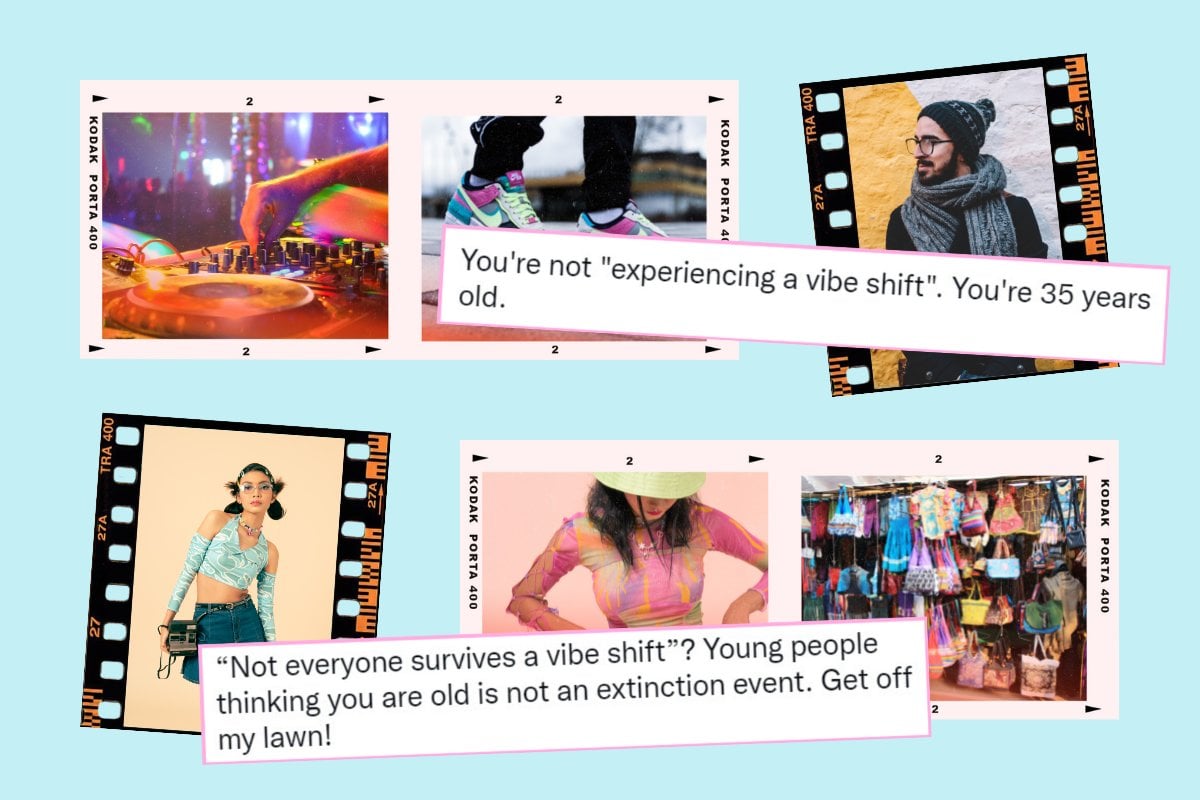 The internet is great for many things: memes, getting stuck down Wikipedia rabbit holes, photos of what cats look like from underneath when they're on glass tables. But... the internet is also a horrendous place, where a multitude of bad things happen every day, and where we are forced into an existential crisis about whether the 'vibe' is 'shifting'.

What does that even mean?

Well, 'vibe shift' is now a term for the phenomenon of trends dying overnight. It's the feeling of everything you're doing, watching and wearing becoming uncool quicker than you can keep up.

The internet has been nose diving this week following an article on The Cut from writer Allison P. Davis, who is no stranger to game-changing - dare I even say, 'vibe shifting'??? - viral yarns. Titled 'A Vibe Shift is Coming, Will any of us survive it?', the story argues, backed by commentary from 'trend forecaster' Sean Monahan, that there have been four great 'vibe shifts' in the 21st century: hipster/indie sleaze music (2003-2009), post-internet/techno revival (2010-2016), Hypebeast/woke (2016-2021), and... now.

A vibe shift is coming. But not everyone survives a vibe shift, writes @AllisonPDavis https://t.co/BsiFwHw45A

My understanding from this is that 'vibe shift' is basically a way of defining the kinds of t-shirts we have previously worn as if they are the three periods of the Mesozoic Era. Apparently, we now must choose between remaining in the Jurassic period or grabbing a brand new tee.

There have been many signs that a shift was coming, before we knew that a change in trends now has a fancy term. The Kids™ are emerging from years of COVID isolation wearing low-rise jeans and posting blurry flash photography online, for example. The rest of us are shaking our heads in confusion and horror.

Many have pointed out that intently dissecting culture in this way feels unnecessary. But is that not what we've been doing for years now? There have been hundreds of think pieces about the death of skinny jeans, whether 'cancel culture' actually exists and 2021's 'vibe shift'-adjacent term, cheugy. Everything, no matter how niche or innocuous in the real world, becomes ripe for discussion on the internet.

Most of the time, this is fun and full of self-aware eyebrow raises. But The Cut's article has sent everyone into such a frenzy that it emerged outside of the walls of the internet, in much more earnest media like The Sunday Times.

“Not everyone survives a vibe shift”? Young people thinking you are old is not an extinction event. Get off my lawn!

It's because it speaks to a fear that many of us have: ageing.

Trends come and go. Always have, always will. They are also mostly driven by younger consumers, and as we age there comes a time when we realise we are no longer at the forefront of them. We might miss one, misunderstand it or feel like it's just... not for us.

Listen: Who will survive the great vibe shift of 2022? Post continues below.

"Not everyone survives a vibe shift. The ones still clinging to authenticity and fairy lights are the ones who crystallised in their hipsterdom while the culture moved on, " Davis writes.

"It 's chilling to realise you may be one of the stuck, or if you aren't, you may be soon. "

This current 'vibe shift' is being driven by Gen Zers who have come of age during two really unusual, traumatic years of pandemic. They're trying to find their feet in this 'new normal', so it lmakes sense that they are emerging with different 'vibes' to 2019.

The rest of us haven't been able to keep up, and it feels like the push-back against the 'vibe shift' is us grappling with the fact that we are now further away from what's on-trend. It's natural to want to fit in and feel 'in the loop', culturally. And it's weird to wake up one day and realise that you're no longer the main purveyors of pop culture and target market for capitalism.

The biggest issue here isn't a shift in vibes or low-cut jeans. It's that culturally, we still see ageing as a negative. We're going to need more than a theoretical 'vibe shift' to tackle that.

Instead, how about we all just like what we like and wear what we want to wear? If this means we're 'stuck' in the 2004 indie vibe shift then... So what?

The most important trend of all is feeling confident or comfortable. If that's in a loud, fluro t-shirt circa the 2010 vibe shift, so be it.

For the record, Monahan's prediction for the new 'vibe' is "American Apparel, flash photography at parties, and messy hair and messy makeup ".

I've had messy hair for 29 years, so maybe I'll survive this shift and be cool a little longer (I won't).

Yes, ultimately, this is all ridiculous. But it's also hilarious. Naturally, the 'vibe shift' has also been meme'd into oblivion, which makes existing in this batsh*t era of the internet worth it in my mind.

No one seems to like the "vibe shift" article but it's very pawg to me. I think it's no cap and fr. It is only rent free if you are cheugy. (my captor cocks the gun held to my head and I try to push it away but my hand is chained to the computer desk) This is sending me

a vibe shift is coming pic.twitter.com/qrLt61qEu2

"And I couldn't help but wonder: would I shift the vibe? Or would the vibe shift me?" pic.twitter.com/lao2GpZUVa

Appreciate the vibe shift article bc it’s given me a new thing to say in group chats when people are talking about something I don’t know about. “That’s the vibe shift.” Should hold me for a week or so

You're not "experiencing a vibe shift". You're 35 years old.

If you still don't understand the 'vibe shift', then I wouldn't worry.

The most important point is that... none of this matters. At all.

Reply
Upvote
3 upvotes
Yeah, this sounds like something that exists solely on Twitter and in Buzzfeed articles, and no-one actually talks about in real life.
M
mamamia-user-482898552 3 months ago