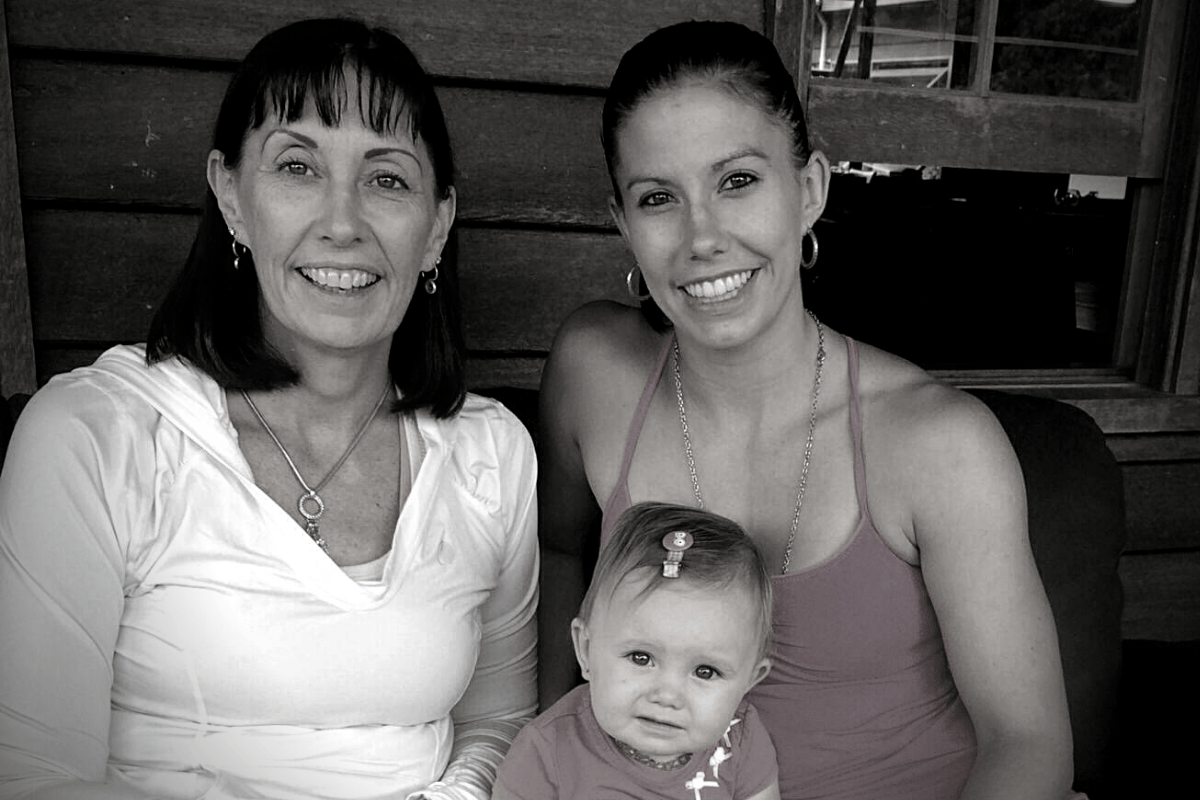 Like any proud grandparent, Sue Clarke's Brisbane home is filled with photographs of members of her family. But there's one wall in her lounge room dedicated to four of them in particular: her daughter, and three of her grandchildren.

Sue likes to sit in that room, gaze up at their portraits, and smile. She thinks about the "wonderful chaos" of the children chasing each other on their scooters outside, and how deeply her "bright, bubbly" daughter loved and lived for them.

The faces on that wall are ones many Australians would recognise. In February 2020 and since, they have appeared on the front pages of newspapers, news websites, and on television bulletins around the country.

They belong to Hannah Clarke and her three children, Aaliyah, six, Laianah, four, and Trey, three.

The beautiful young family was killed by Hannah's estranged husband, after he ambushed her car on a morning school run. There, in broad daylight, on a normally quiet street in the Brisbane suburb of Camp Hill, he took the lives of the four people he ought to love most. Unwilling to live with the consequences, he also took his own.

Watch: Hannah was among the one Australian women lost to domestic violence every week.

The crime reignited the conversation about family violence in Australia. And, as details emerged of what Hannah and her children had endured prior to being killed, it introduced many to a form of abuse known as coercive control.

Sue Clarke among them. Though she had witnessed up close the devastating abuse that the perpetrator had inflicted on Hannah and his children, coercive control wasn't a term Sue was familiar with at the time.

She now works with organisations including Beyond DV and Safe Steps for Hannah, which she co-founded with her husband, Lloyd, to raise awareness about this insidious and deeply dangerous form of family violence.

The couple was this week named Queensland's 2022 Australians of the Year for their efforts to "empower victims to speak up, guide family members to be aware of those who may be in an unsafe environment, and create safe environments for those who need them most."

"I don't want Hannah and the children to be forgotten," Sue said. "If we can keep their names out there, that's a good thing... Because the message might help save just one more person."

Coercive control is a pattern of abuse designed to dominate, oppress and trap another individual.

Though it can come hand-in-hand with physical violence, it typically involves more insidious and manipulative tactics like social isolation, intimidation, humiliation and degradation, monitoring movements and communication with others, controlling finances, and so on.

This behaviour escalates over time, slowly reforming the target's thought process until they begin to believe the narrative being forced upon them. Perhaps that no one else would want them, or that they aren't strong enough or smart enough to manage on their own.

As such, it's often one of the answers to that frustratingly persistent question asked about domestic violence victims: Why didn't she just leave?

A 2020 survey by the Australian Institute of Criminology found that close to six per cent of women had experienced coercive control in the previous three months, and 11.6 per cent had suffered at least one form of emotionally abusive, harassing or controlling behaviour.

However, many experts suggest the true figure is likely to be far higher.

As journalist Jess Hill explains in The Trap, her brilliant 10-part podcast on the subject, many victim-survivors aren't even aware they're being abused:

"Their own needs, thoughts and feelings fade into the background, and are overwhelmed by those of their abuser. As so many victim-survivors say afterwards, it’s like you lose yourself. That’s not a sign of weakness. It’s a symptom of coercive control." 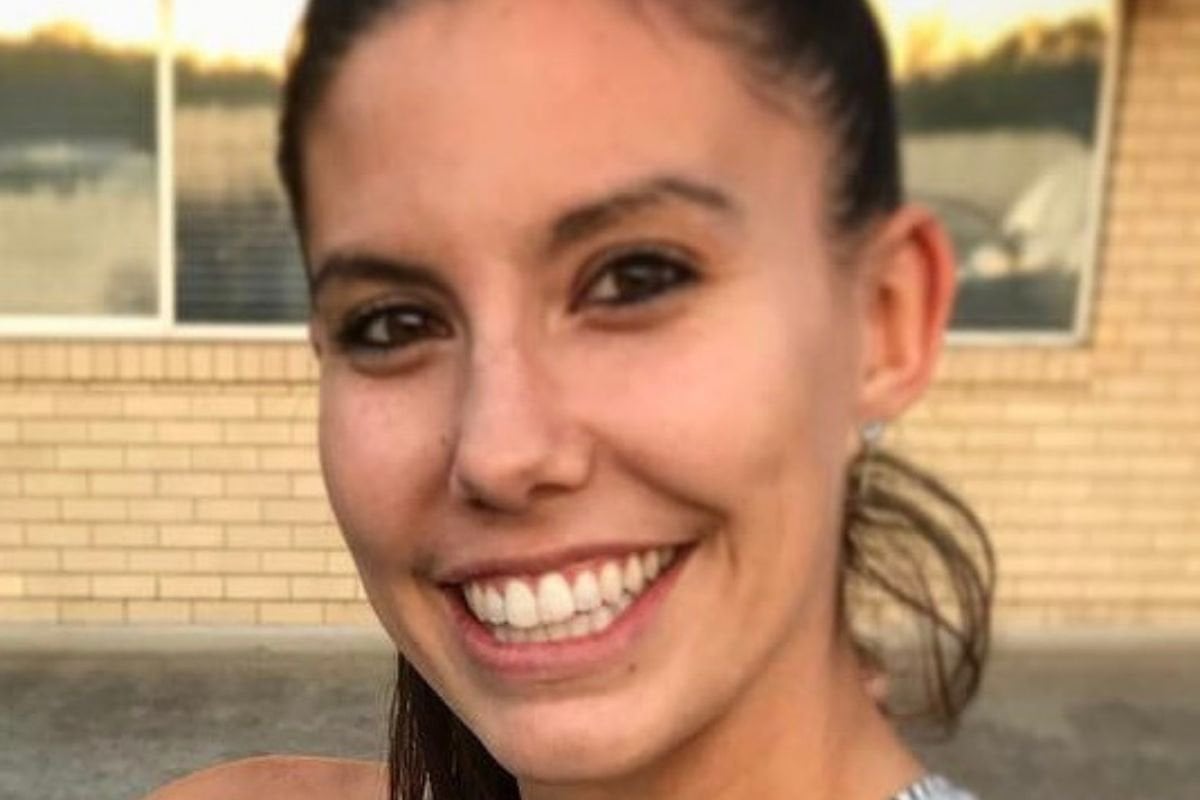 The perpetrator in Hannah Clarke's case followed, in Sue's words, a "textbook" pattern.

While she said it was clear from the beginning that he had difficultly controlling his temper, over time he carefully manipulated Hannah and those around her to ensure she stayed with him.

Sue would get tearful phone calls from her daughter saying, "He said I'm a useless mother. The house is a mess." And just after she'd had the baby, "I'm a fat pig."

He isolated her from friends, and even turned her against her beloved brother. He stoked arguments between her and Sue, knowing that Hannah considered her to be "the next best thing" for their children.

"He started to resent that, and then he would get quite nasty to me and say horrible things, just quietly when no one else could hear it," she said.

"Occasionally, I would say something about his behaviour, and then all hell would break loose. She would ring me in tears, and I would then have to call him and apologise and grovel to make things right... For her sake, I had to keep quiet. I would have done anything to keep her safe."

The perpetrator also forced Hannah to have sex with him every night, kept revealing photographs of her in his car as if threatening to distribute them, and forbade her from wearing short clothing in public.

He repeatedly warned her that she'd never be able to keep the kids from him. And when things got particularly strained between them, he threatened to take his own life. (According to Sue, he'd storm out of the house, take the hose from the back garden, and drive off, forcing the family to engage in a desperate search.)

Sue said he even used the children to aid his abuse of Hannah, questioning them about where their mother had been that day, what she'd done, and who she'd seen.

Aaliyah, old enough to sense what was happening, tried to act as the peacemaker.

"There'd be days where he would sulk and not speak to Hannah, and [Aaliyah] would go up to him and say, 'Daddy, Mummy has said she's sorry. Can't you talk to her?' And she'd get yelled at for interfering in adult business," Sue said. 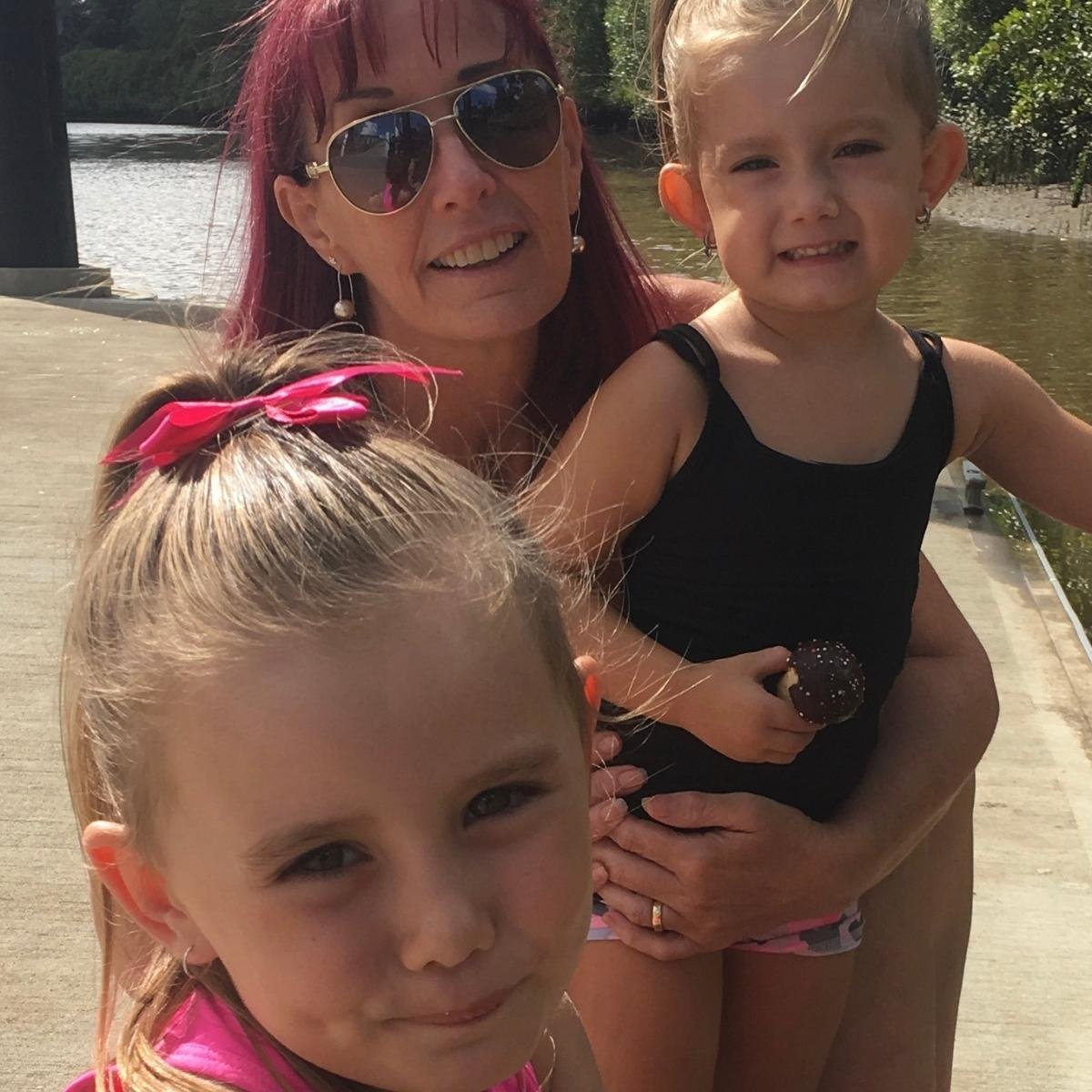 As she got older, Aaliyah also saw herself in another role.

"She would love to come to our place, but she didn't like to sleep over here too much. And she'd be upset if she ever left the house without saying goodbye to her mum or kissing her," Sue said. "She was actually frightened not to be there to protect her mother."

As Dr Denise Buiten, a senior lecturer in sociology and social justice at The University of Notre Dame who specialises in gender and violence, previously told Mamamia, though children are rarely spoken about in discussions of family violence, they are deeply entwined in the abuse.

"We think of domestic violence as an issue for women — and it is. But it's more than that," she said.

"The research is very clear. Coercive control very much ropes children in and affects them quite significantly."

Sue and her husband, Lloyd, did everything they knew to support Hannah.

Despite the perpetrator's best efforts, they remained closely involved in her life. They attempted to persuade the perpetrator to seek help. They offered her a safe place to land. And when she and the children arrived on their doorstep in December 2019, equipped with a protection order and garbage bags full of belongings, they'd readied the house with bunk beds and extra locks.

Sue said Hannah had been wanting to leave for about six to eight months prior, but the perpetrator had found various ways to trap her.

Even amid their separation, he exerted his control by persuading Hannah to let him spend time with the children over Christmas. On Boxing Day, Hannah and the children met him at a local park, where he snatched Laianah and fled to NSW for three days.

That struck a new fear in all of them. Particularly Hannah.

"She came to me and asked me if she should write a will," Sue said. "I asked her why, and she said, 'Because when he kills me, he will be in jail, and I won't be here. And I want the children to live with you, Mum.'

Sue learned the news via a colleague.

"A young dentist I worked with that morning was skimming through Facebook, and she just went, 'Oh God! Three kids have been burnt to death in a car at Camp Hill.' And I just knew... Then the police walked in," Sue said, her voice catching.

"It was horrible. Hard to fathom it. Although, with Hannah, we actually had to turn the life support off on her, so at least we saw her. But not seeing the kids...

"I'd kissed them goodbye that morning, told them I love them. Luckily, I did." 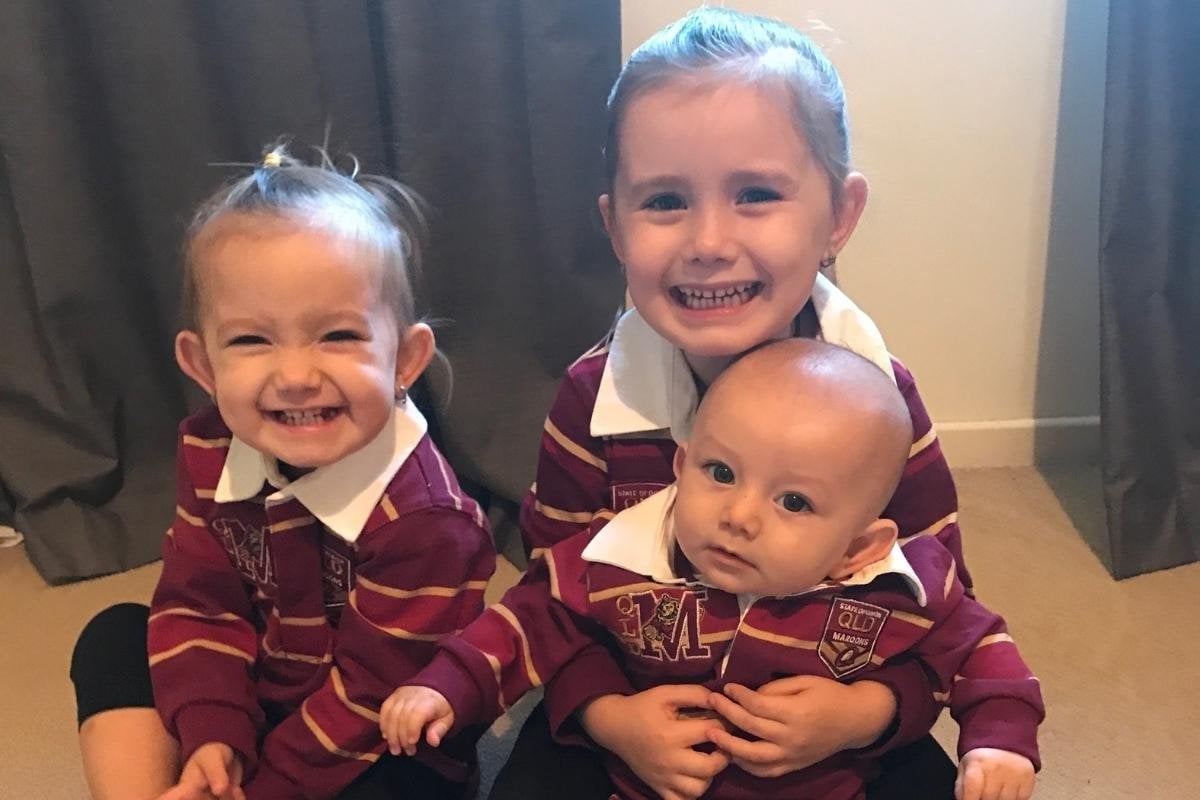 Coercive control is the biggest predictor of intimate partner homicide; more so, even, than physical violence.

And as with many forms of family violence, leaving is often the most dangerous time as the perpetrator sees it as the ultimate defiance of their control.

It's why Sue and other family violence awareness advocates are appealing for change, to ensure that when people do manage to break free from their abuser, there are systems in place to support them.

Sue, for one, would like to see improvements in the availability of affordable, long-term safe housing for victim-survivors.

She's also advocating for specific legislation that criminalises coercive control, such as that which has been implemented in Scotland and is currently being considered in several Australian states.

"I'm pleased that the Queensland Government are right behind it and have a task force looking into it. I think that's fantastic. But I want them to get it right. I don't want them to rush it and then there be loopholes," she said.

In the meantime, she offers this advice to loved ones of a person trapped in a relationship like Hannah's.

"Be patient and be there," she said. "You can plant the seed that it might be a good idea to get out of there, but you can't push them. Statistically, women go back [to their abuser] seven times before they leave for good.

"I think you just have to be there and let them know they have a safe place to go. But they have to be ready."

For more of an insight into coercive control, including the work being done by organisations like Beyond DV, listen to The Trap here or via your preferred podcast app.

If you or a loved one is experiencing family violence, support is available. Call 1800 RESPECT on 1800 737 732 or visit the website to chat online.

If you are concerned about your behaviour within a relationship, call Relationships Australia on 1300 364 277 to find a service near you.

Reply
Upvote
2 upvotes
Thanks for not mentioning the pos name.
M
mamamia-user-482898552 8 months ago