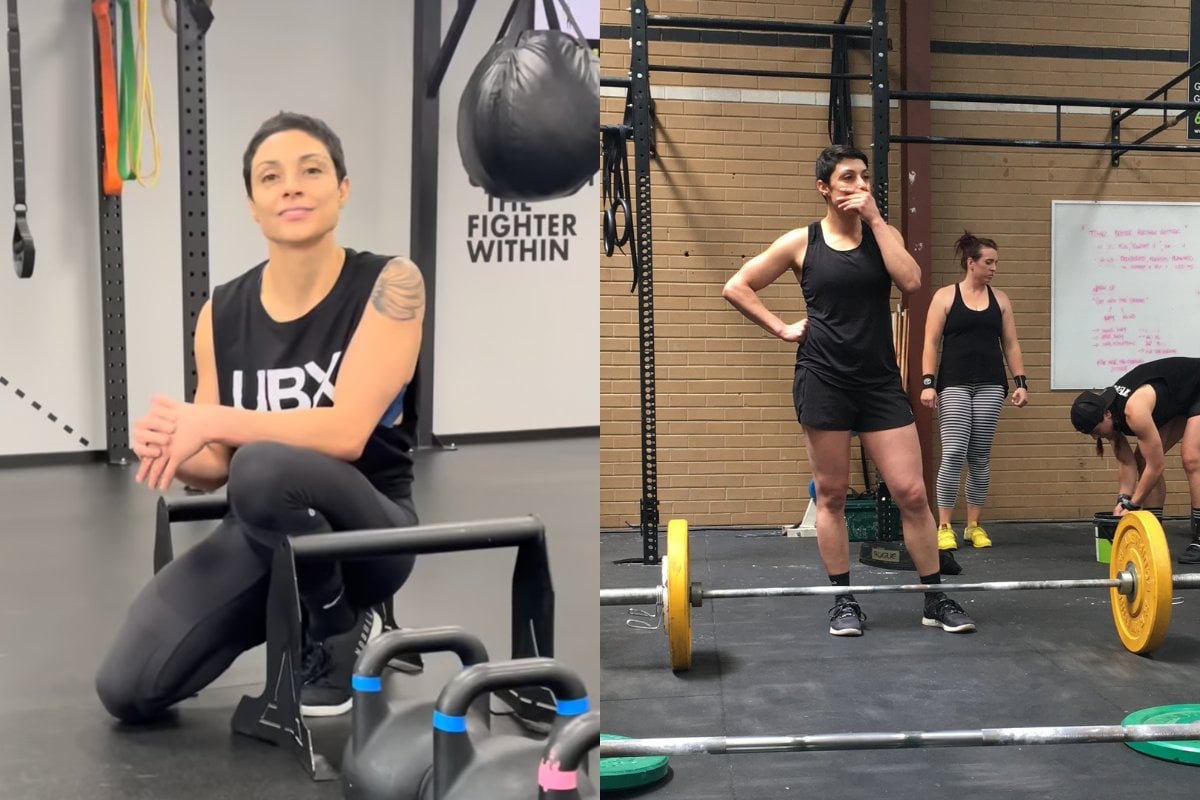 Let’s play a word association game – I’ll say a word and you say the first word that comes to your mind.

I too was one of those sceptics of CrossFit. In fact, the first time I tried CrossFit was under duress (I mean, isn’t that how everyone gets into fitness?).

Spoiler alert: I liked it so much I became a CrossFit coach a few years later.

While you're here, watch how the Horoscopes work out. Post continues after video.

CrossFit is quite literally a cross-section of any and many fitness disciplines - if you can think of it, it’s probably in a CrossFit workout; weightlifting, bodyweight exercises, rowing, kettlebells, running, gymnastics (don’t worry, there are no backflips, although... cool).

The philosophy behind CrossFit is variety. Variety in movement. Variety in duration. Variety in intensity. All in an effort to achieve overall general fitness.

And as a fitness professional - I don’t hate this.

When I walked into my first CrossFit session, I. Was. PETRIFIED. Was my initiation having my skull crushed between the tree-trunk-thighs of a hulk of a woman? Was I going to be held down by shirtless sweaty men as they branded me with a hot iron of the CrossFit logo?? WAS I???

What I found was *gasp* regular (clothed) folk, in a supportive environment, doing their best to improve health, fitness and wellbeing.

Why isn’t anyone trying to crush my skull?

What happens in a CrossFit session?

Typically, sessions are one hour in duration lead by a CrossFit coach, and as stated above could involve anything:

Honestly, I don’t have the space here to do the variety in CrossFit justice. Just know there is a lot of it.

At the start of your session, you gather around a whiteboard where the Workout Of the Day (WOD) is written. Thank God. Because, memory.

From here, your coach will explain and demonstrate the workout ahead, including alternatives. This is where there isn’t enough love and light shed on CrossFit: all workouts have a ‘scaled’ version. Whether it’s using lighter weights, fewer repetitions or alternative movements, CrossFit workouts are accessible to everyone.

As a matter of fact, in my experience, the majority of people in a CrossFit session will actually do the scaled version of the WOD. 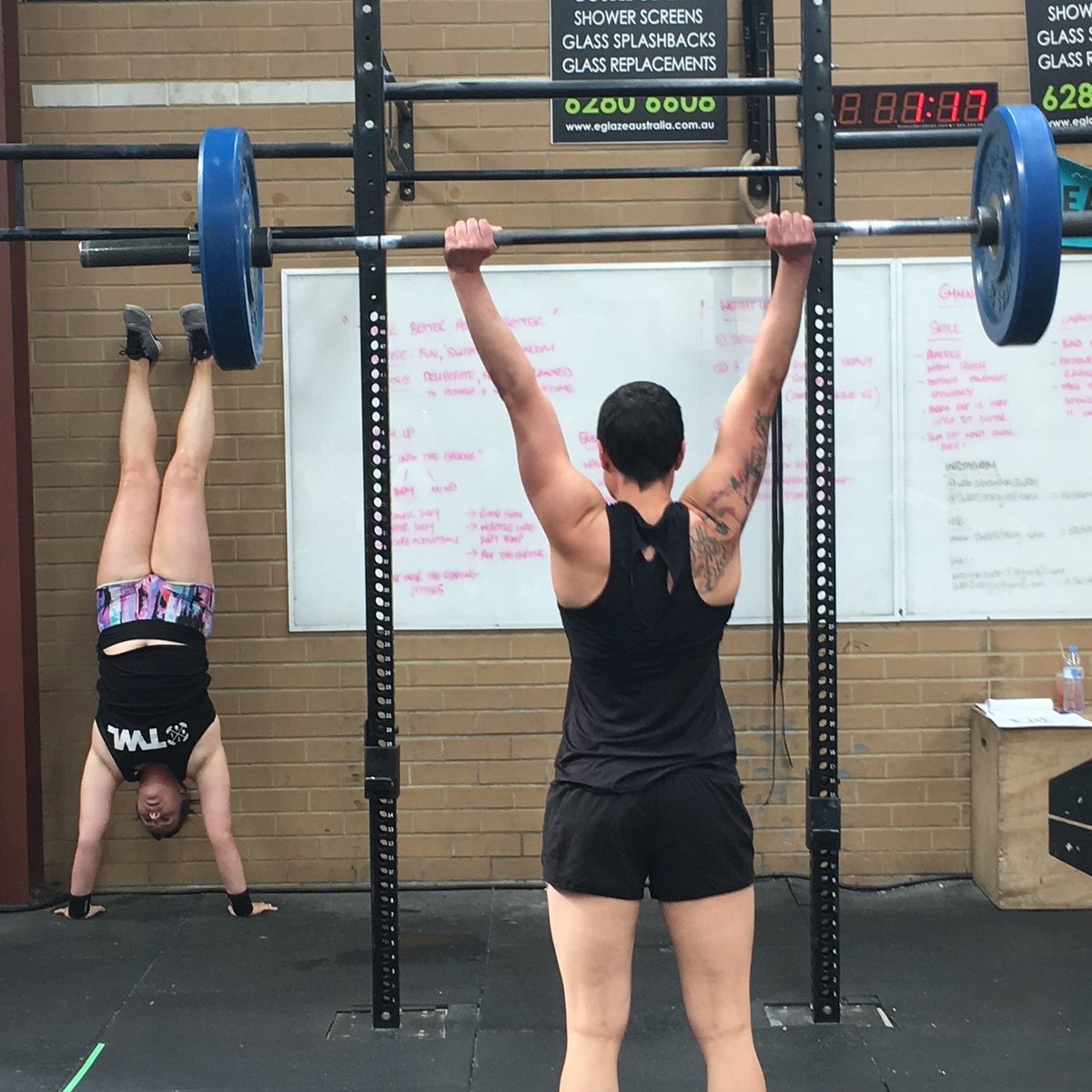 What you are not seeing here are my tears. Image: Supplied.

Who should do CrossFit?

If you love variety and are open to trying different types of movement, you will enjoy CrossFit. Don’t let what you think you know about CrossFit put you off. The reputation doesn’t do it justice. 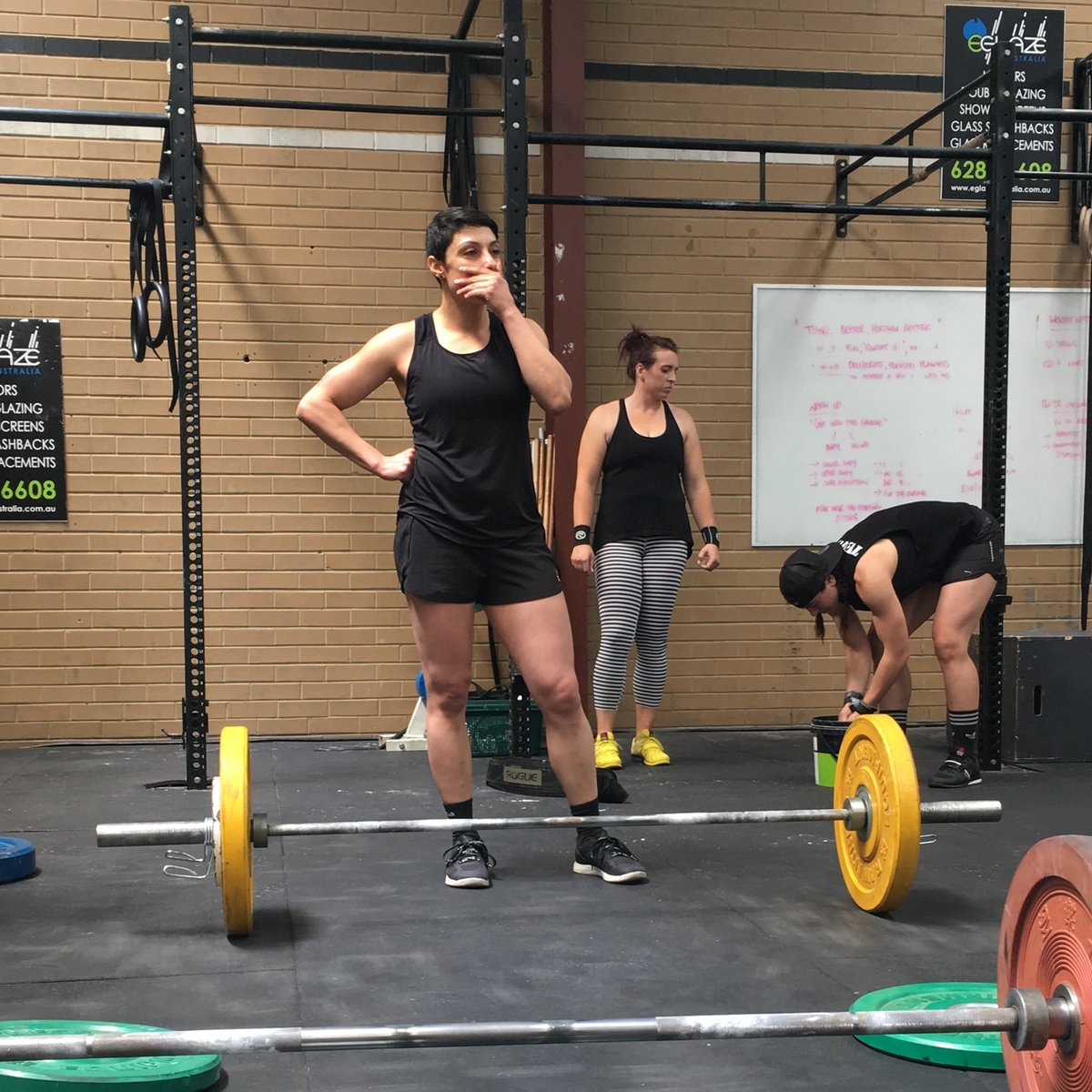 My face during a CrossFit workout. Image: Supplied.

Those tremendous CrossFit athletes you might see on socials and in the news are inspiring, but not representative of the community that participates or the accessibility of the workouts.

What does CrossFit actually do?

Because there is such a variety of movement and intensity in CrossFit workouts, you really do get a dose of everything: strength, cardio, power, speed, agility, coordination, balance, flexibility...

CrossFit is like the Swiss-army knife of fitness. But less pointy. 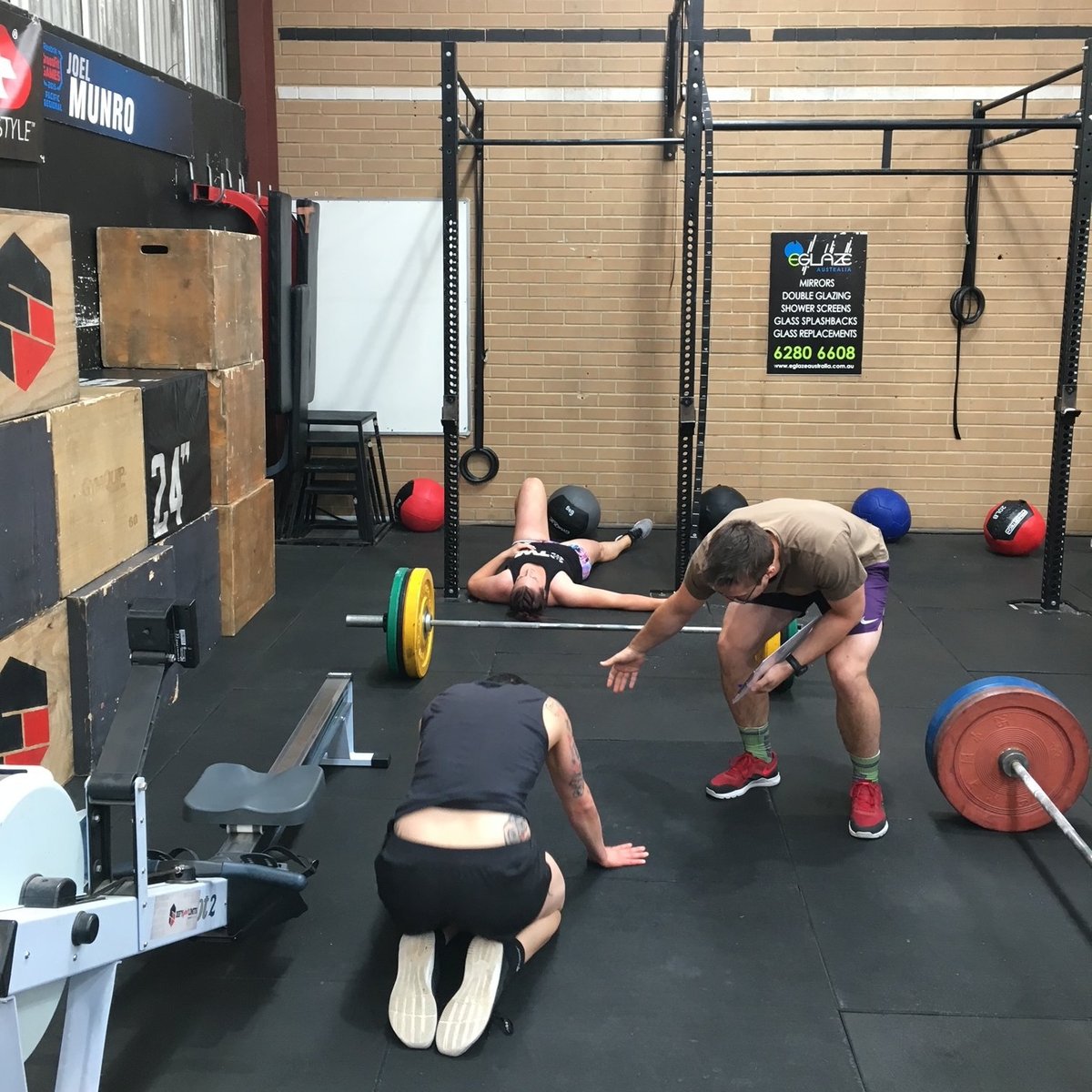 What should I look out for when trying CrossFit for the first time?

Almost all CrossFit locations will offer free trial periods. These are so important in trying and finding the space and community that you feel comfortable in. Do the coaches explain the workouts thoroughly enough for you to understand? Are they clear with the correct form? Do they correct your form? Are they sympathetic to any limitations you might have and do they provide suitable alternatives to make you feel successful? Are the Coaches approachable? Do you gel with the community?

These considerations are important not just for your safety and success in CrossFit, but also for your exercise adherence. 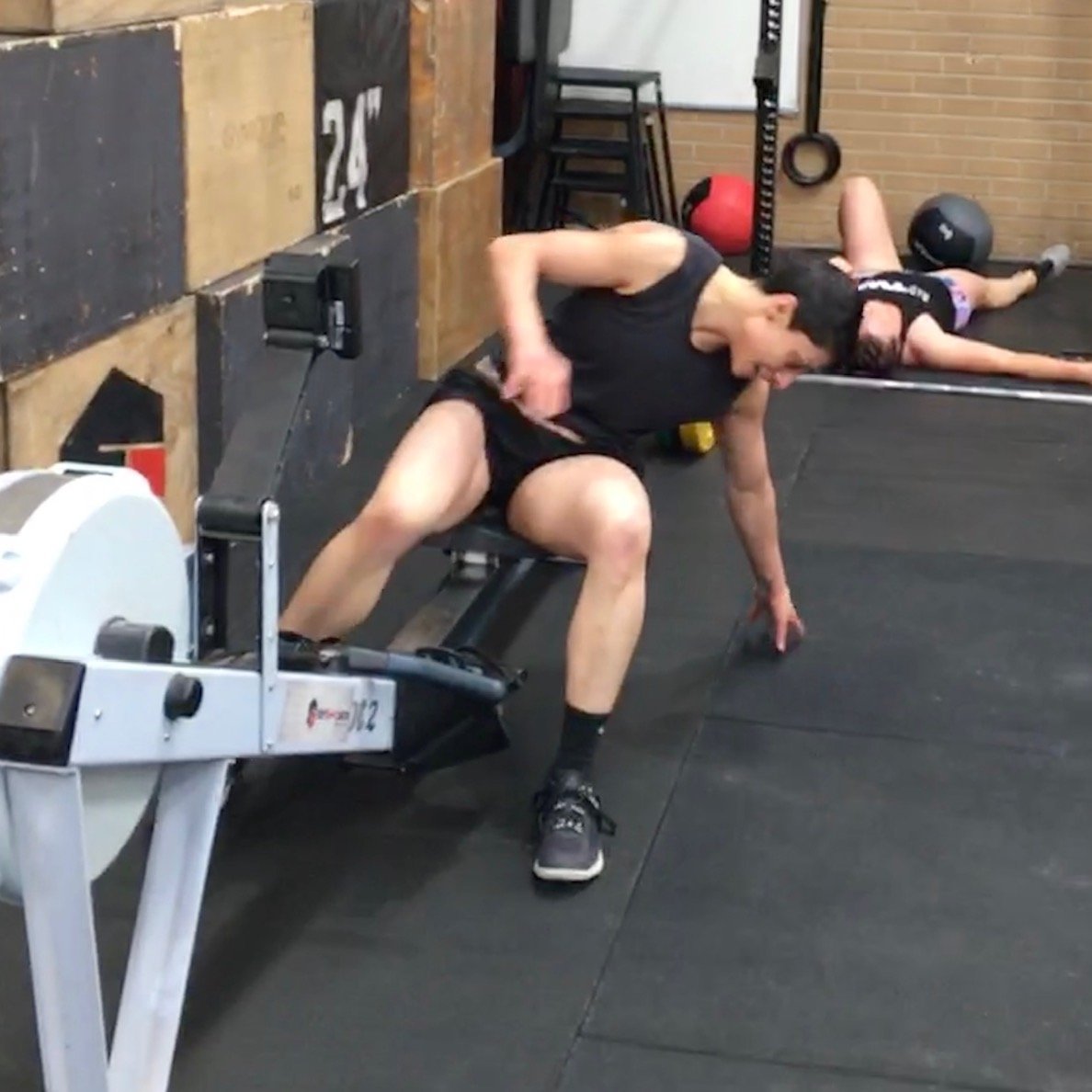 That time I fell off the rower. Image: Supplied.

And finally, the lingo.

CrossFit does have its own lingo and does love an acronym. So before you head into your first CrossFit session, here’s a heads up on some of the most common terms.

Box: as in CrossFit box, not CrossFit gym.

WOD: Workout of the Day.

Rx: Workout as prescribed. All CrossFit workouts have a Rx version - that is prescribed movements, at a prescribed weight at a prescribed number of repetitions and/or time (e.g. 5 sets of 10 squats at 50kg with 90 seconds between each set).

Scaled: Modified Rx. The same Rx workout will have a scaled version for accessibility. This could mean alternative movements, at a decreased weight and/or decreased repetition range and/or time. (e.g. 5 sets of 8 squats at 30kg with 90 seconds between each set).

IMF*CKED: Nothing official. Just something I say a lot.

Marie has been a fitness industry professional since 2005 and currently owns UBX Boxing + Strength in Belconnen (Canberra). Marie is a qualified Personal Trainer, Les Mills group fitness instructor, CrossFit coach and Pilates teacher. You can follow her on  Instagram.