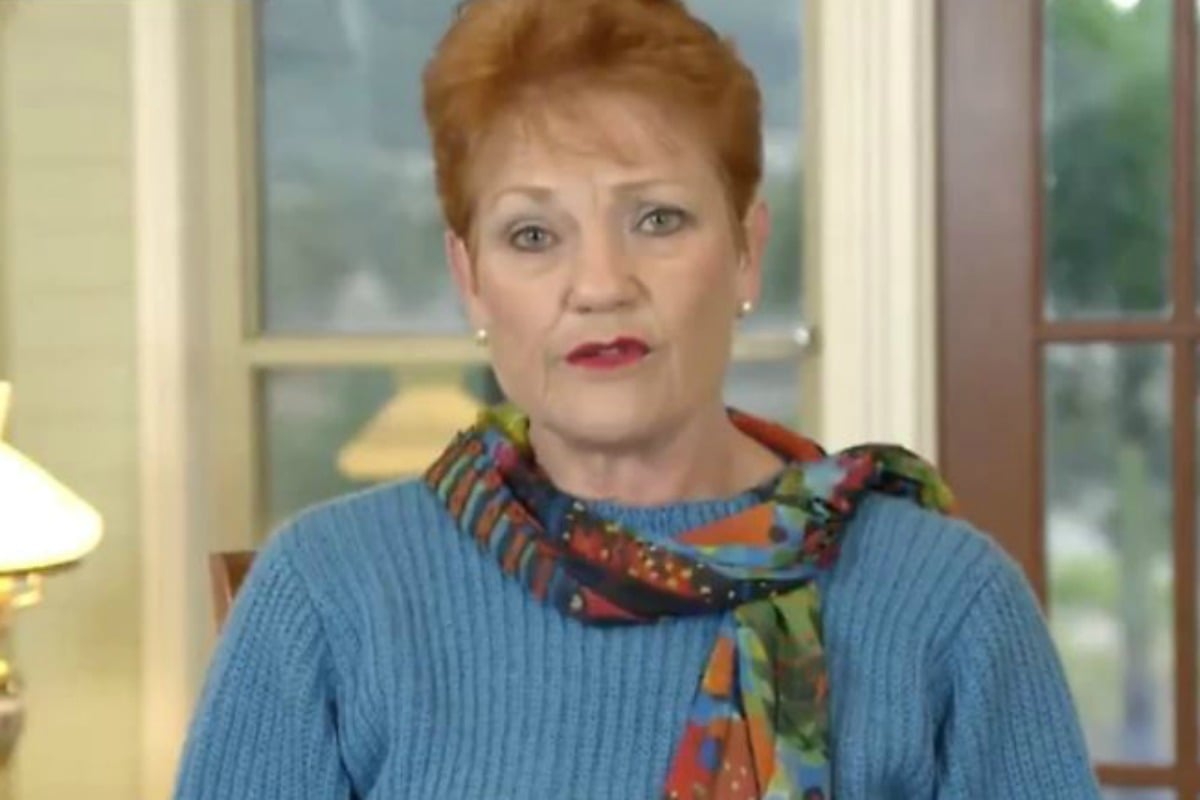 One Nation leader Pauline Hanson has been dropped as a contributor on Channel 9's Today show, after comments she made regarding Melbourne residents trapped inside housing commission towers.

On Monday morning, Hanson referred to those being held in hard lockdown as "drug addicts" who should be more proficient in English, among a slew of other insults.

In a statement on Monday afternoon, Nine’s Director of News and Current Affairs Darren Wick said, "The Today show has advised Pauline Hanson that she will no longer be appearing on our programme as a regular contributor.

"We don’t shy away from diverse opinions and robust debate on the Today show. But this morning’s accusations from Pauline Hanson were ill-informed and divisive. At a time of uncertainty in this national and global health crisis, Australians have to be united and supportive of one another. We need to get through this together."

An overview of what's happening in Melbourne right now.

In the harshest coronavirus lockdown seen in Australia yet, 3,000 residents from nine public housing towers in Melbourne have been banned from leaving their homes for any reason.

The residents of the nine towers will be in lockdown for at least five days, Victoria Premier Daniel Andrews announced on Saturday afternoon, with the restrictions effective immediately.

Andrews said: "In recent days, 23 cases across more than 12 households have been identified in the Flemington and North Melbourne public housing estates."

"This represents a challenge we’ve not yet encountered. This is not like an outbreak spread across multiple homes or multiple suburbs.

"The close confines and the shared community spaces within these large apartment blocks means this virus can spread like wildfire."

Within minutes of the premier's announcement, police swarmed the housing estates as they blocked driveways and doorways, barring residents from leaving.

In the meantime, health workers are aiming to test every "every single resident" for COVID-19.

What did Pauline Hanson say?

1. "The fact is a lot of them are drug addicts as well, they are getting their medication, they are alcoholics so they're being looked after in that way."

Hanson said on national television that "a lot" of the residents are "drug addicts", despite having no figures or insights to back up her claim.

We know that residents of these housing estates are disproportionately vulnerable. This includes the elderly, refugees, people with disabilities, single mothers, individuals living with mental health issues, as well as some living with addiction.

To suggest that the vast majority of people living in housing estates are "addicts" (which, to be clear, is a mental illness, and not a way to classify a human being) is statistically unsubstantiated and harmful.

While the government has said people will be provided with "medical support, drug and alcohol support, family violence support and other essential services," it is currently unclear how this will be accessed, or if residents currently have everything they need.

The government is providing financial assistance given people are not legally allowed to attend their place of work, and their quality of life has been significantly compromised.

Residents who cannot go to their place of work are receiving a $1500 hardship payment, while those who are unemployed will receive $750.

3. "A lot of these people are from non-English speaking backgrounds, probably English is their second language who haven’t adhered to the rules of social distancing. They all used a lot of the same laundry."

The purpose of these towers, and various other estates across the country, is to house Australia's most vulnerable.

We have found ourselves in a position where the high density living arrangements of public housing does not allow for social distancing. 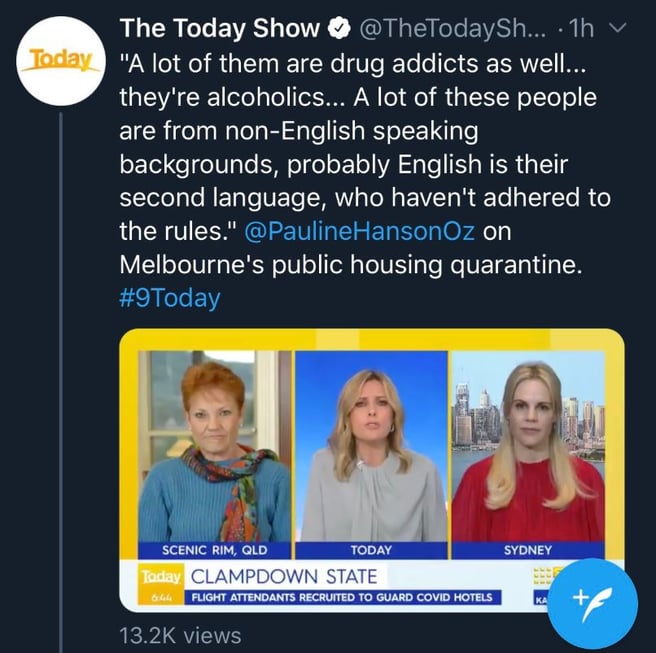 Australia has been particularly slow to translate COVID-19 public health messages into other languages, especially given one in five Australians speak a language other than English at home.

For example, it was only late last week that the Covidsafe app became available in Arabic, Cantonese, Mandarin, Korean and Vietnamese.

It's also worth noting that COVID-19 has spread more rapidly in public housing estates in the United States, Sweden, and other countries all over the world, due to overcrowded living conditions.

In these specific public housing towers, hundreds of people are often sharing one lift, which means the chance of contamination is high, even if one is adhering to social distancing rules.

To reiterate, the reason these buildings have been shut down is because, according to acting Australian Chief Medical Officer Paul Kelly, "Those towers have a large concentration of people in a small area." He described these towers as "vertical cruise ships".

Emma King from the Victorian Council of Social Services said specifically: "No one’s done anything wrong. People are simply living in high density buildings in often very cramped conditions and socialising with each other - it’s created this extraordinary crisis."

There has been no suggestion by the Victorian government that residents are intentionally not "doing the right thing".

If anything - the answer to 'why are these people in this situation' - is; because Australia's most vulnerable people are living in buildings that do not afford them the ability to social distance.

5. "Is the Government worried about the other areas that are shut down? You know, the people in their homes, are they able to actually get out and buy the food as well? There has to be a reason why they have targeted this set of blocks, apartment blocks. Ask that question."

For an answer to that question, see above.

6. "You know, these people, I saw them taking a truck load of food to them, all the rest of it, if they are from war-torn countries, which some of these people are, they know what it is like to be in tough conditions."

As Sarrah Le Marquand, editor-in-chief of Stellar and Body+Soul magazine said on the program: "This is not a war-torn country - it’s Melbourne. It doesn’t matter whether they speak English or where they have come from. We are talking about young children and families."﻿

Reports have emerged of residents who require Halal meals receiving pork for dinner. Even in prison, religious and cultural dietary requirements are respected and adhered to. Other residents say they opened bags with cereal and jam, but no milk or bread. 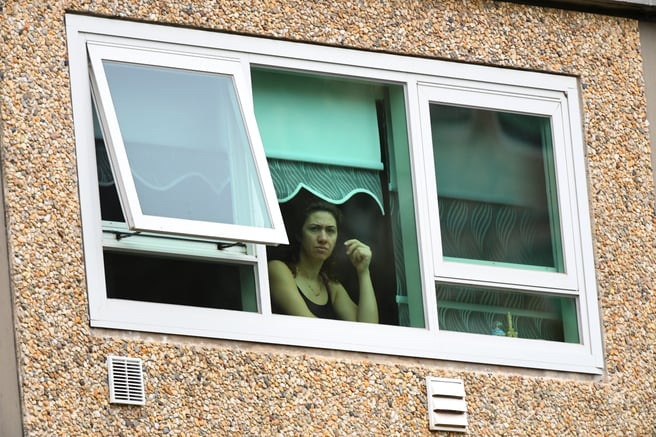 A woman looks out from a window inside a unit at the public housing tower along Racecourse Road in Melbourne. Image: AAP.

The reality that some of these families have fled war-torn countries means that being locked in their homes and guarded by police might actually be re-traumatising.

Whether we think these measures are too harsh or a necessary intervention to save lives is a separate discussion. But no matter where we stand, all of us can surely agree - as Andrews rightly says - that the situation 3000 Australians have found themselves in is not a pleasant one.

Of all the inaccurate and divisive statements Hanson made on Today, perhaps the most disappointing feature of her appearance was her distinct lack of compassion.

For the minorities who Hanson has further marginalised during her multiple appearances on Today, hopefully Channel Nine's decision to de-platform her, will bring with it a welcome sigh of relief.