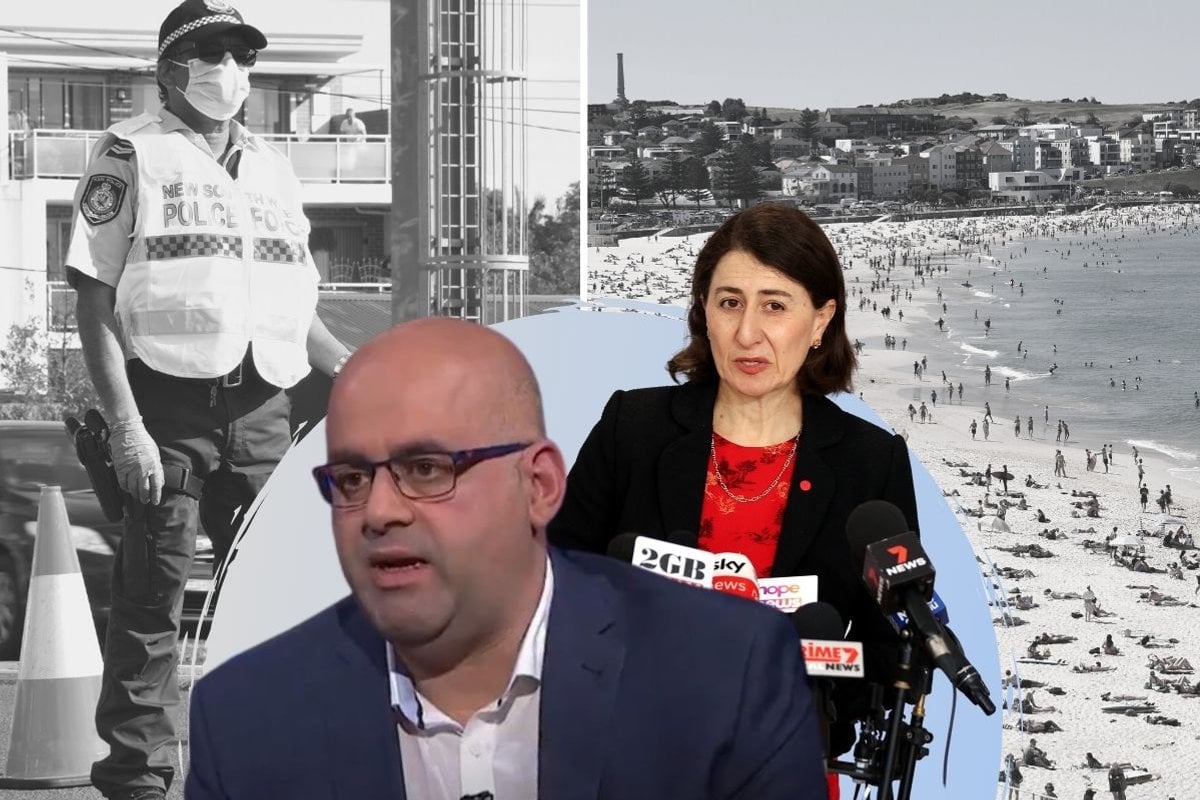 When you actually crunch the numbers, it's hard to comprehend.

Sydney and Parramatta - LGA's with similar population sizes - have had almost the same number of COVID cases in the last four weeks.

According to NSW Health, Sydney, which has a slightly smaller population than Parramatta, has 1018 cases. Parramatta has 1054.

And yet only one of these Sydney LGAs is considered "of concern."

It's yet another chapter in the 'Tale of Two Cities' we're seeing play out in the NSW capital.

As Mayor of Canterbury Bankstown Khal Asfour told ABC's Q&A last night, "One gets arrested when they're grieving. The other gets to sunbake. It doesn't make any sense."

Watch Mr Asfour on the ABC. Post continues after video.

He was referring to a case in Rookwood, in western Sydney, where funeral mourners were arrested for exceeding the 10-person gathering limits. Meanwhile, beaches in the east were filled with thousands of Sydneysiders last weekend enjoying some balmy Spring temperatures.

"What I'm hearing from people — and I've had a lot of interaction with individuals, including Khal over the last week or so — there is an absolute feeling of two cities," Ms Burney said.

"One where you see people going to the beach. And another where you've got helicopters flying over you with loud speakers. And that's the reality."

Channel Ten journalist Antoinette Lattouf wrote about the divide for Mamamia in August. A vast majority of her large Lebanese family live in the west and south-west of Sydney.

Her WhatsApp chat has looked like this the past few months:

"How come people in the east are still allowed to go and get Botox but we are locked up and can’t work to put food on the table?"

"Why does the media talk about us like we’re stupid?"

Because the 'Tale of Two Cities' has been bubbling away since the very beginning of the current Delta outbreak.

The variant popped up in Bondi in mid-June. And yet it took weeks for the NSW government to enforce restrictions, let alone a lockdown. As it grew and spread to the west, the clampdown there was swift and hard. It's remained as so, while the original epicentre - the east - has enjoyed milder and gentler restrictions throughout the entirety of the outbreak.

So given @GladysB lost control in the east & was slow & soft handed with her lockdown measures, people in the west have to cop the harshest measures. The majority of southwest don’t have jobs that allow them to work from home. It truly is a covid tale of two cities within Sydney

Because if you look at the daily COVID statistics right now, the majority are still in the south-western and western Sydney areas.

Comparatively on the whole, the east isn't as much as a hotspot as the west right now. But there are still plenty of cases and it's the way the rules are being policed that's the problem.

It's admissions like that from NSW Deputy Premier John Barilaro, who told a press conference earlier this month “Curfews don’t work, let’s be honest guys," as two million people in Sydney were confined to their homes from 9pm to 5am.

"I mean, the reality that we went down the curfew model for southwest and western (Sydney) is because there was a lot of media push — and I can get away with saying that. So the idea of a curfew is one that was put in place in an area that was so out of control and you would question its ability to work, and if you look at the numbers since we put the curfew in nothing has occurred, nothing has changed, numbers continue to rise," he said.

The media can rant and rage all it wants, it's the government's job to not discriminately police one part of the city over another with a measure that apparently doesn't work. Only this week was the curfew finally scrapped.

Curfews in Sydney’s Local Government Areas (LGAs) of concern have now been lifted, as the state hits the milestone of 80 per cent of the adult population with one dose of the COVID vaccine. pic.twitter.com/52l7IRmWNh

Last weekend the west heard the premier and chief minister continually tell the state that "the safest place to be is outdoors."

The west saw thousands of unmasked people enjoying the surf and the sunshine. And yet as Mayor Asfour told the Today Show, "We can't go to our lovely parks, the recreational areas by the Cooks River or the Georges River - if we were out there yesterday we would have had the cavalry brought in."

It's the double standards.

Read: So, people in Bondi went to the beach. What are we really upset about?

"Look our problem isn't with the people in the eastern suburbs going to the beaches or enjoying a picnic. We just want to be treated fairly like the rest of Sydney," added Mayor of Burwood John Faker told SBS.

For those residing in LGAs of concern, you’re only allowed outdoors to exercise.

Recreation as an option was only introduced on Monday for those fully vaccinated.

We know outdoor recreation has a relatively low risk of transmission

Why are the rules on outdoor exercise and recreation different between the LGAs of concern and the rest of Sydney? pic.twitter.com/W8WHPgkVv7

Today a NSW parliamentary inquiry into the state's Delta outbreak will hear from more leaders from the west. Local mayors, ethnic community leaders and government agency representatives are all scheduled to speak and share their communities' truth.

First-dose vaccination numbers in Blacktown, Parramatta and Campbelltown have cleared 80 per cent of the eligible population, with other local government areas of concern not far behind.

They'll likely spend the weekend watching Eastern Suburbs families enjoying the beach once again - as they're allowed to do.

The west just wants access to the "safest place they can be," within reason, too.

For more from Gemma Bath, keep up to date with her articles here, or follow her on Instagram,   @gembath.