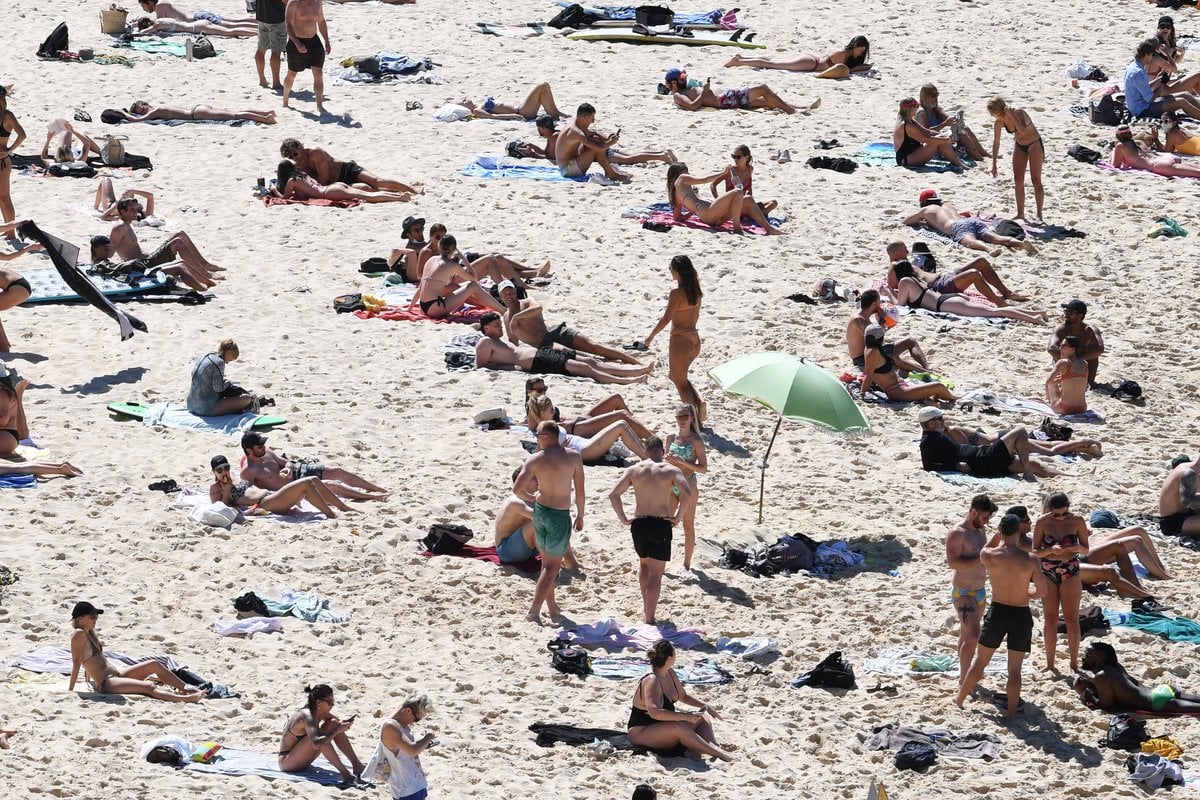 Is there a site quite as contentious - quite as riddled with tension -  as the sweeping, white sand crescent of Bondi Beach?

Journalists knew what their weekend story would be before midnight on Friday.

They knew that while 12 local government areas (LGAs) were still operating with curfews and limited outdoor time, those closer to the coast were restricted by neither.

It would be the height of the Tale of Two Sydneys. A story told by snapshots of crowded beaches. Glistening, clear water. Sand peppered with thousands of beachgoers. A calculated camera angle that makes it look as though everyone is shoulder to shoulder, when, in fact, there are a few metres between them.

The message across newspapers, news bulletins and social media was clear.

Some are living in paradise. Beside the most beautiful beaches in the world. They're swimming and they're sunbathing, and most aren't even wearing a mask.

This is the scene at Bondi Beach this arvo. @GladysB where is the army? Or the police? Or it doesn't matter because these are your people and the rules don't apply to them. You are a disgrace. Resign#GutlessGladys #COVID19nsw #sydneylockdown pic.twitter.com/PHAw1ulVbS

Others are living in hell.

People in those 12 LGAs watched on. One woman described to me feeling as though: "Everyone had been invited to a party except me".

While some Sydneysiders ate fish and chips on the beach, watching the sunset, others were followed home by police, questioned about why they were still out after nine.

While some enjoyed expansive parks and an ocean swim, others wondered when their basketball rings would be returned, so they might have something to do outdoors.

Basketball hoops were taken down in the south-western Sydney suburb of Greenacre this weekend. @SBSNews https://t.co/P4O2gasaRA

In Sydney workplaces on Monday morning - virtual or otherwise - there was not a more loaded question than: "What did you get up to on the weekend?"

This is of course because there are different restrictions in different LGAs based on different case numbers. We can all appreciate that.

As David Park wrote for the ABC: "Lockdown isn't so bad if you can swim on the beach or get your kayak out for a paddle on the harbour, as opposed to jogging around hot suburban streets."

The inequity felt over the weekend has always existed. The pandemic has not created this class divide. It has simply amplified it.

Listen to today's episode of Mamamia Out Loud. Post continues after podcast.

Of course, this is a vast generalisation. There are many who live in close proximity to a beach who are not rich, and many who do not live near a beach, who are not poor. But, as Josh Nicholas highlighted for The Guardian, the areas that have been hit hardest by the pandemic in 2021 are those that already had poorer health outcomes. And those with poor health outcomes, also happen to have less open space.

So did people in Sydney's harshest lockdown have the right to feel angry on the weekend, when presented with the images taken with the intention of making them angry?

But the question is who we ought to be angry at.

Because the Bondi local who visited the beach on Saturday did not break any rules.

Twitter was full of people posting pictures of Sydney beaches, with snide remarks about "what lockdown?" and people who aren't able to follow "basic instructions".

This picture was taken within the last 60 minutes at BONDI BEACH, SYDNEY!

Enforcement of the public health order is Eastern Sydney appears to have COMPLETELY COLLAPSED!

Citizens in Western Sydney have every right to be OUTRAGED!

EVERYONE MUST BE FREE! pic.twitter.com/sHPT3yraqQ

The hypocrisy and discrimination against people from South-west and Western Sydney cannot be ignored!#freewesternsydney pic.twitter.com/rCSepcU4Ob

It has become a bizarre act of social policing to walk past a crowded area and take a photo, before letting social media know that you absolutely do not approve of it.

But the scenes from the weekend were not "unbelievable" or even (mostly) dangerous.

In fact, the NSW Minister for Health, Brad Hazzard said over the weekend: "I think that the fresh air, we know that it is the safest place to be at the present time."

He encouraged people to maintain social distance, but otherwise said people have been "generally... really good".

It's become almost heresy to remind people that, according to all the research, being outside in the sunshine is a low-risk environment.

But this, again, is where it gets complicated.

If the outdoors is low-risk, then why are there limits in some areas and not others? If it is, as some have suggested, about the "symbolism", then what of the "symbol" of a packed Bondi Beach?

It's the inconsistency that's riled up Sydneysiders. Public health orders have been enforced harshly in some areas, and gently in others. And it's worth noting how few people appeared to be wearing masks at the beach over the weekend, which is still the public health order.

People who live near the beach, spent the weekend at the beach. By doing so, they did not break the rules. It was not a case of "civil disobedience" as former Opposition Leader Mark Latham attempted to argue. No one was "giving up" on the COVID fight. It was not "madness".

Should they have stayed inside on a beautiful day, in an act of solidarity for those who could not visit the beach?

Is that what any of us did when the Northern beaches were locked down for Christmas? Abandon our plans because we couldn't all enjoy our freedoms equally?

To expect such is ridiculous.

The issue is about more than Bondi Beach.

It's about our access to public spaces. It's about punishing people for where they live. And it's about inconsistency.

If only it were as simple as tutting at some eager beachgoers.

Reply
Upvote
I think we are all just fed up in general and out of patience with covid normal.
L
loueythefly 4 months ago