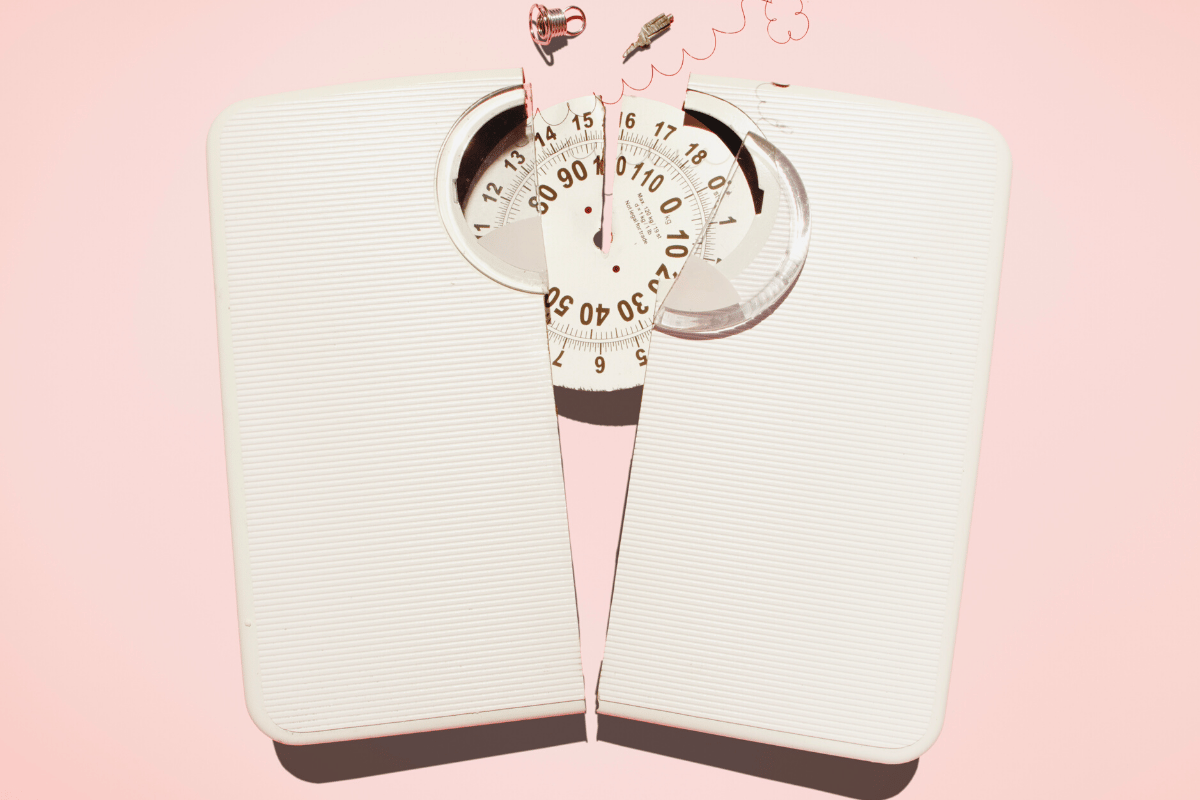 In a viral post within a Mamamia Facebook Group - Mamamia Outlouders - mum Leah shared the story of her nine-year-old daughter and classmates being publicly weighed at school.

"How is this still even allowed to happen?" Leah said.

"They were all asked to weigh themselves at school today as part of their phys ed class. Whilst the teacher told them 'it doesn't matter what the number is' to me, the activity itself is so insanely problematic. There were comparisons, commenting on other people's numbers and calling out the heaviest kids as 'fat'," she continued.

Leah had to have a long conversation afterward with her daughter about self-worth and body image, hoping that what happened at school today doesn't have a lasting impact. She's not alone.

Almost 200 women have shared their horror at the situation and their own similar stories.

Dr Natasha Magson is a postdoctoral researcher at the Centre for Emotional Health at Macquarie University.

Speaking with Mamamia about the problematic nature of this practice, Dr Magson said: "It focuses on weight as an indicator of health when the focus should be on regular exercise, a healthy and varied diet and educating young people about body diversity and acceptance. From research, we also know that from a very young age children (as young as three!) view larger bodies as 'bad' and thin bodies as 'good'."

As Dr Magson notes, equating weight with health has been shown to perpetuate social exclusion, weight-based victimisation, stigma and prejudice. Not to mention that body weight and shape is the most common reason that children and adolescents are victimised by their peers.

"Weighing a child in front of peers encourages school-aged children to engage in body and weight comparison, and with this comes feelings of embarrassment and shame. This has the potential to exacerbate an already concerning problem," she said.

The Butterfly Foundation shares a similar sentiment, stressing the importance of focusing on overall health and wellbeing rather than weight.

"A high level of body dissatisfaction and weight concerns are also leading to an increasing number of men and women engaging in disordered eating behaviours. It is important to note that only a clinically trained health professional is qualified to provide medical advice on your physical health," The Butterfly Foundation says.

Of course not all teachers, education institutions or schools practice this. Most would completely disagree with it. But the fact even a small minority do is concerning.

To highlight just how sadly common Leah's story is, these women below share their experiences of being publicly weighed at school. What their anonymous stories speak to is that not only is this practice incredibly problematic, it also has long-reaching effects.

"I still remember what I weighed in year two when we did it in class, and now I'm 46 years old. It has stuck with me."

"I too experienced the same almost 30 years ago. And when I discovered that my son had to do the exact same thing in his year seven maths class last year, I was mortified. How have things not changed?"

"I have two teenage daughters with Anorexia Nervosa. 26 admissions between the two of them in the last two years. Improved and improving but it's been horrific. For those who make the decision to do these weighing activities: this is what's at risk."

Listen to This Glorious Mess: The seven parenting moments that broke us. Post continues after audio.

"As a dietitian, this is absolutely horrifying. Weighing students is completely inappropriate and potentially damaging. The scientific literature consistently demonstrates how discussions around weight and negative body image at a young age can have profound impacts in later life."

"We, as a society, are not in a place where you can weigh children and just say 'oh don't worry about the number'. I vividly remember having this happen to me as a child. I was taller and a little more developed than the other girls, and because of that, my number was bigger. I still to this day remember the anxiety and embarrassment."

"Sad to say this type of thing is standard practice throughout a lot of the UK. I went to boarding school in England, and every term we had to be weighed and all of our numbers would be added to a spreadsheet which was then printed out and pinned to the corkboard in the school's hallway for all the students to see. Those students whose number were considered overweight (I might add based on stupid BMI) were then highlighted in a different colour. I was one of those people."

"My ten-year-old is overweight, and as a family we are judged all the time without anyone knowing our child's medical history. There's often more to the story. This would be heartbreaking if this sort of thing described happened to her. Bullying and teasing about her size is our constant fear. And weighing school students in front of one another would be a breeding ground for potential teasing."

"In high school I remember we once did an activity where all the students were lined up in order of weight and height. I think it was supposed to be part of a maths exercise, but the whole thing felt super problematic."

"I'm a teacher and developed an eating disorder in high school: but even without that background there is no way I or any other teacher I know would do this! It's heartbreaking."

"Are they still seriously doing this? I was a chubby kid in school and I still remember when they weighed us and did skin fold tests on us in PE. It was mortifying and more than a few girls in my class ended up with eating disorders."

"My daughter did this in year four in 2015. She has only spoken about this in recent years but it has had an impact on her. Outdated and stupid."

"This happened to me at school too. I was bigger than most in my class, considering I had developed early, was built with a wider body frame/shoulders and I was training for sport five times a week. But the whole experience has stayed with me since and I'm in my forties now."

"It's still happening today. Both my kids were weighed in high school as part of PE program this year."

"I developed years of horrible eating disorders straight out of school. I still remember our teacher saying 'fat' girls won't get jobs. These types of things can trigger something in someone which wasn't even an issue before. Just teach about balanced eating and staying active: no need to bloody weigh them."

"As a teacher, this was very sad to read and something the vast majority of us wouldn't condone. This type of stuff can have real impacts on kids."

"Back when I was at primary school, there was an old crone nurse who used to come every couple of months. They used to check everyone for scoliosis but weight and height were mandatory. Because I was overweight, I was always called up first, and she used to make me strip down to my underwear and do push-ups and star jumps in my underpants while she weighed and checked everyone else. She thought it was going to shame me into losing weight when in reality all it did was reinforce bad body image. Childhood obesity is an important topic, but there is nothing to be gained and much to lose by practices like these."

"I have it burnt into my memory the horrific experience of being the heaviest in my class and being teased with 'BB Bomber (Big Barb's Bomber)' and 'Hungry, Hungry Hippo' for years after this public weighing exercise. I was ten. I'm now 50. I can't believe it still happens."

So to any schools where these damaging practices still exist: perhaps it's time to change with the times.

Leah has given approval for Mamamia to share her story.

Reply
Upvote
@philippadv Agree. I went to school ages ago (in a far less politically correct era) and this never occurred.
C
cat 3 months ago

Reply
Upvote
@philippadv  this happens in year 7 PDHPE class at every school in Australia.

Reply
Upvote
@philippadv it was part of our PE fitness test that we did in year seven and possibly year eight. They measured our weight and height, and we did timed sit ups and push ups, a sit-and-reach test, and I think some sort of running thing too. This was back in the early 90s, but I wouldn't be at all surprised if it still happened.
G
guest2 3 months ago