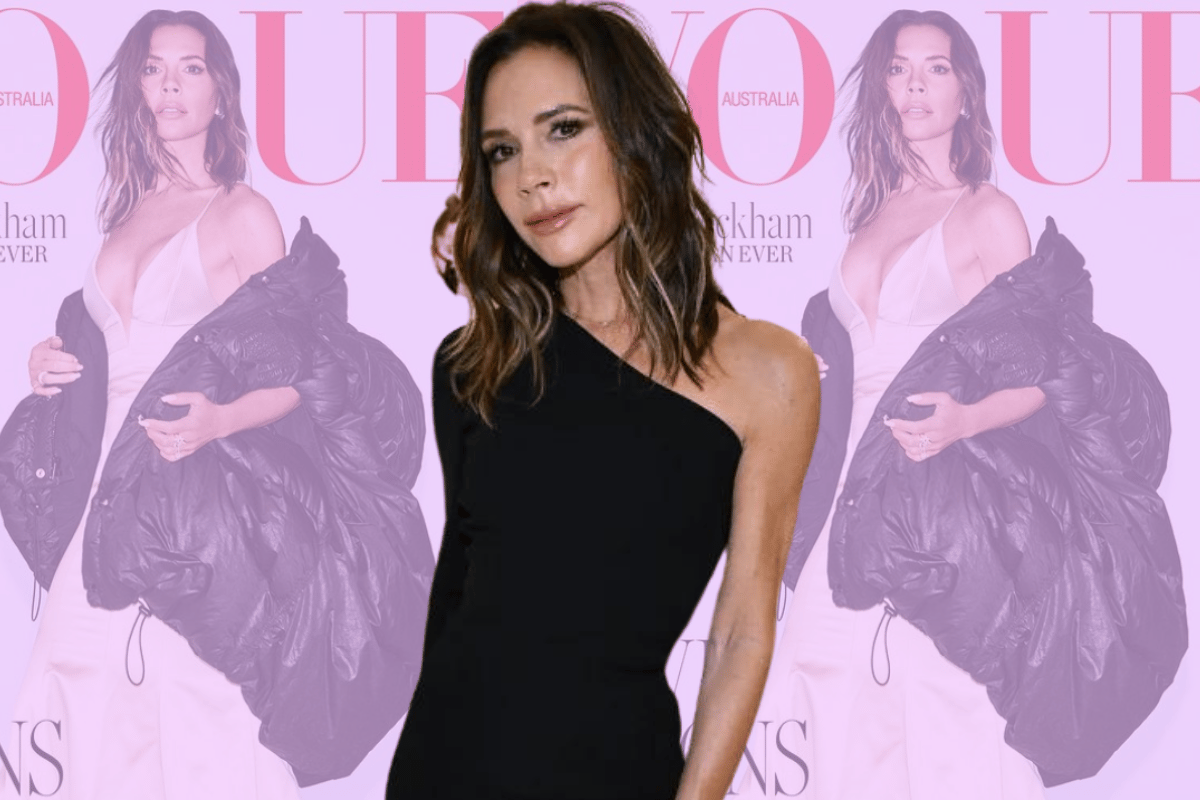 Victoria Beckham has lifted the lid on her life in the spotlight.

In a new interview with Vogue Australia, the former Spice Girl turned fashion designer spoke about her family, her full-on morning routine, and why she's keen to show more skin the older she gets.

Beckham also opened up about her time on a British TV program where she was asked to weigh herself live on air, and why she's thankful that will likely never happen again.

So without further ado, here are 10 things we learned from the profile.

Starting her day at 6.45am, Victoria gets out of bed and immediately heads to the gym in her house, where she runs on the treadmill for 30 minutes uphill.

After her exercise, she wakes up daughter Harper, aged 11, makes her breakfast, and walks her to school.

Once she's back from school drop-off, she's back in the gym doing a weights session with her personal trainer, followed by a professional blow-dry.

2. She predominantly uses her own products.

Now this fun fact makes complete sense - because when you've created as much as Victoria Beckham has, you may as well reap the benefits.

The 48-year-old said she mainly uses products from her Victoria Beckham Beauty line as well as her skincare collaboration with Augustinus Bader.

As for her wardrobe, it's 99 per cent her own label. Well, besides a pair of "very expensive Balenciaga glittery thigh-high boots" and a few designer bags.

But of course, the designer is already planning on launching her own collection of Italian-made bags later this year, so she'll soon have that covered.

3. She has kept some of her spendy purchases that she bought using the Spice Girls' clothing budget.

During the Vogue Australia interview, Beckham said her burgundy crocodile Birkin bag is a relic from her "trussed-up WAG days".

She also shared that she alone spent most of the band's clothing budget as "the other Spice Girls weren't really into fashion".

4. It was a hard slog to build a reputation in the fashion industry.

It's been more than a decade since Victoria Beckham started her eponymous brand. And it took some time for fashion's elite to take her seriously.

"I was very aware of people's preconceptions when I first started. I was quite polarising because of my past and being married to a footballer and things that had been said about me in the press," she said.

It was a gradual process - Beckham appearing runway-side at various fashion shows, British Vogue putting her solo on their cover, and Marc Jacobs casting her in a campaign. And it all paid off.

"When I had just had Harper, and I was showing in New York, that's when it really took off for me. That's when I did start to become accepted. I became a different dresser at that point. That's when I was wearing more Comme [des Garçons] and things that were less sexy and more deconstructed."

5. Dealing with fan frenzy has its highs and lows.

The profile writer referenced Beckham's "warmth and trademark brand of sarcasm" in relation to how she meets fans. Beckham also shared a recent story where she met a number of fans while visiting the Harry Potter shop in Piccadilly with her daughter and parents.

"My mum and dad are standing there like proud Spice Parents going, 'Look at all these people asking for our daughter's picture and autograph!'" she said.

"I don't know if you'd call it a reminder that, 'She's still got it' or if you'd say, 'What a pain in the arse that is.' It depends on how I wake up in the morning.

"It's a double-edged sword, but I will never complain about it. Can it be frustrating sometimes? Absolutely. But it can also go in my favour."

Listen to The Spill: The shocking TV stunt Victoria Beckham never signed up for. Post continues after audio.

The fashion world is constantly evolving, as are trends. In the blink of an eye, it appears the bodycon dress is even experiencing a resurgence.

"You know, it's very much what fashion people do. I wanted to do something different. I decided I wanted to wear more fitted dresses. I wanted to show more skin. I wanted to celebrate the fact that I'm a woman," she said.

"And I wanted to stop hiding under clothes."

7. She called out a British TV show that weighed her on air.

Beckham also shared that she has experienced a lot of frustrating moments in the press, with people obsessing over her appearance and weight - something she said she has never wanted.

"I've had 'Porky Posh' on a headline, I've had 'Skeletal Posh'. After I had Brooklyn, there was a picture on the front of a newspaper pointing to every single part of my body as to where I had to focus on losing the weight from."

She also made note of an infamous TV moment where she was weighed on live TV. The host Chris Evans started by asking Victoria if she had "lost the baby weight", and when she answered that she had, he pulled out a set of scales and made her stand on them.

A similar thing later happened to fellow Spice Girl Geri Halliwell (now Horner), with the host telling her: "Your gut's not there anymore, it's disappeared. I mean, I don't know where it's gone to."

Reflecting on that ordeal, Beckham shared: "I went on a TV show with Chris Evans many years ago, and I'd just had Brooklyn and lost a lot of weight after. It happened to my mum after her pregnancies. It doesn't mean you have an eating disorder. And he made me stand on scales and be weighed. Can you imagine doing that nowadays?"

8. She's worried about Harper being on social media.

Beckham shared that she worries about her 11-year-old daughter Harper being on social media.

"Harper isn't on social media, so we don't have to worry about that just yet. But seeing how cruel people can be, yes, it really does [concern me]," Beckham said.

"She's at that age where her body is going to start changing, but it's about making sure that we communicate a lot as a family and she surrounds herself with nice friends. But it is quite terrifying. I can't lie."

9. She also keeps a close eye on her three boys, who are all in the spotlight.

Although Harper is too young for fame just yet, Beckham's three sons have already begun living a life in the public eye.

Cruz is into music, Romeo does football and modelling, and Brooklyn has his own online cooking show.

"You want to offer your support and do what you can to help them. But it makes you a bit nervous because, you know... you don't ever want anybody to be anything other than kind and love what your children do," she said.

10. She clarified her husband's comments surrounding her diet.

David Beckham recently told food podcast River Café Table 4 that his wife rarely deviates from a go-to dinner of grilled fish and steamed vegetables. And the tabloids certainly had a field day.

In the interview, Beckham clarified that there's more to it than just grilled fish and steamed vegetables.

"I mean, talk about making me sound boring! No. What he meant is that he's never met anyone who's more disciplined with the way that they eat. I eat lots of healthy fat: fish, avocado, nuts, that sort of thing. I do drink alcohol, unless I have a reason not to. I'll detox from anything for three to six months where I won't drink," she explained.

"I'm quite extreme in anything I do, whether it's eating or working out or drinking or not drinking."

You can read the full Vogue Australia profile here.