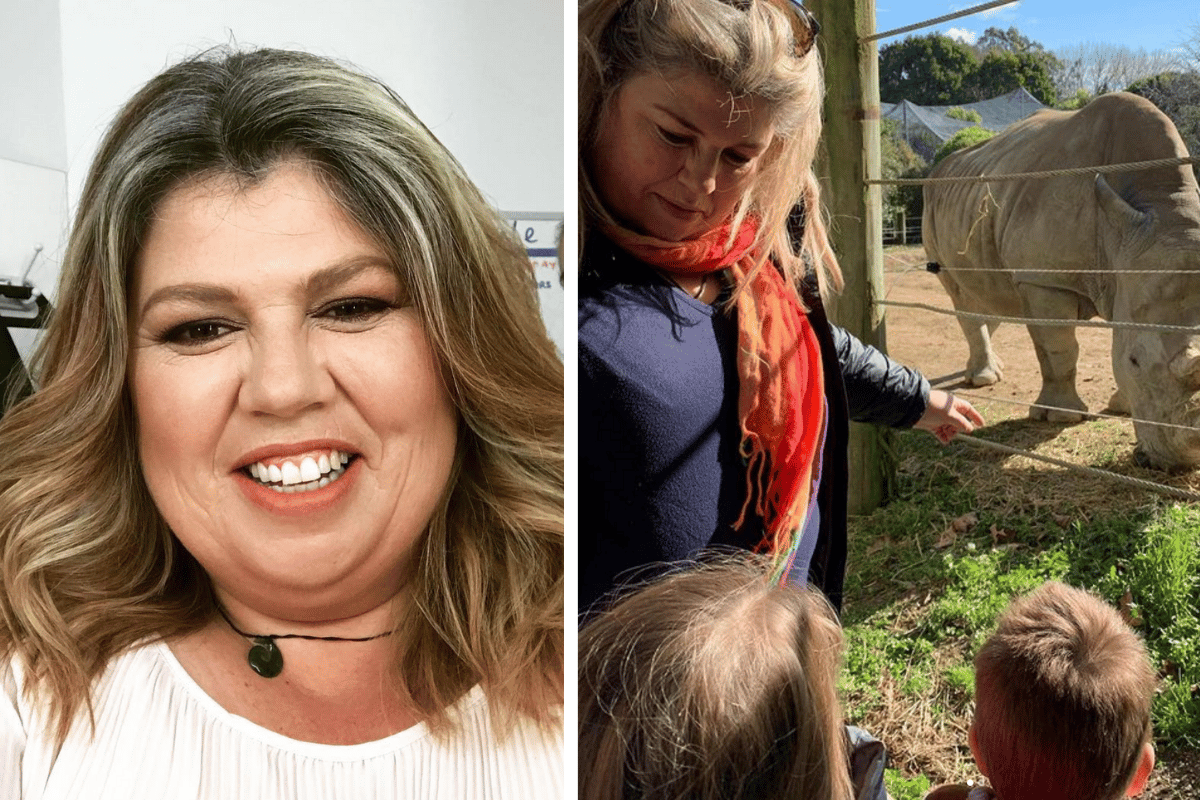 Urzila Carlson's life has been anything but ordinary.

She didn't decide to become a comedian until she was 32, having lived quite the life prior. Now, Urzila has established an incredible career for herself, with a massive fan base both in New Zealand and Australia.

With a judging role on The Masked Singer and regular appearances on Have You Been Paying Attention, Urzila is one hilarious person.

On the latest episode of Mamamia's podcast No Filter, Urzila discusses everything from her family, to the decision to emigrate to New Zealand, to the jokes she chooses not to tell.

Urzila Carlson grew up in the same town as Hollywood actress Charlize Theron, roughly 30 minutes away from Johannesburg.

In an interview with the NZ Herald, Urzila shared her family's experience of escaping from her abusive father when she was around seven years old.

"Dad was drunk, and he was looking for us with a gun. He actually fired some shots in the street. We ran out the back door to our neighbour's house and hid in a wardrobe. Mum was in the other wardrobe. Dad came in looking but couldn't find us. Our neighbour snuck us into his car and drove us out of town, laying on the floorboards with blankets over us."

Urzila, her mum and her siblings then started a new life for themselves in a different town.

By the age of 24, Urzila was the production manager for South Africa's largest newspaper group with over a dozen newspapers and six magazines. But the job came with its own set of challenges.

"In South Africa, the government controls the media. The new government still does. We used to get death threats on the phone, and from the caller ID, we could tell it was coming from the police station," Urzila shared on No Filter.

As for why Urzila decided to leave South Africa?

"There was so much going on at home, crime-wise. I was seeing this woman at the time and she had a five-year-old son: I just remember thinking to myself, I didn't want to raise a kid in this environment. In a schoolbook that he carried was a printed piece of paper stuck to the back, which had all the school rules written on it. It said things like, 'don't bring a weapon to class', 'don't assault anyone', 'don't sexually violate anyone'. It was hard to swallow," Urzila shared on No Filter.

After her house got burgled while she was in it, a smash and grab on her car at the traffic lights, and an armed robbery at work, it all became too much.

So, in her late 20s, Urzila decided to pack up her life in South Africa and emigrate to New Zealand.

"I had seen an ad in the newspaper saying, 'Do you want to emigrate? How about New Zealand?' I shrugged to myself and said why not, and three months later I was on the plane."

It was a bit of a culture shock for Urzila when she arrived in New Zealand.

"The news was so different. I couldn't see what the Kiwis had to complain about. In the early days of being in New Zealand, I kid you not for 15 weeks, there were articles in the paper saying the country had a marmite shortage after the factory was damaged from an earthquake. Locals were furious: they didn't want vegemite, they wanted marmite."

Urzila still enjoys travelling back to South Africa now and then. In an interview for Out & About with Kids, she said: "It's my home and will always be, regardless of where I live. I love South Africa and it's in my blood. Culturally it’s a much richer place now, and it has become more arty too. I am a South African-New Zealander."

Although some of Urzila's family still resides in South Africa, some of them also made the move to New Zealand, including her sister and mother.

Urzila Carlson didn't decide to become a comedian until she was 32.

To this day, Urzila's first comedy gig was the scariest thing she has ever done in her life.

At the age of 32, Urzila had decided advertising wasn't for her, and looked to pursue a comedy career instead.

"That moment where you're on the side stage waiting to go out and they call your name: that walk is the longest walk you'll ever do in your life. I could hear my heart beating, everything running through my brain," she shared on No Filter.

Before this moment, Urzila hadn't even used a microphone before. "I had no idea how to use it. I was squeezing the mic so hard that it came off its stand. Everything went blank, but luckily most of the people in the audience were wearing green for Saint Patrick's Day so I made a comment like, 'I wish I could wear green, but I'd look like Shrek'. They all started laughing, and I went from there."

Listen to No Filter: It’s personal for Urzila Carlson. Post continues after audio.

And since that fateful day, Urzila has gone on to establish an incredible career and name for herself.

In 2019, Urzila became the highest-selling comedian in the 33-year long history of the Melbourne International Comedy Festival. She also took home the coveted People’s Choice Award the same year and made her Netflix debut.

In 2019, Urzila also re-released her autobiography Rolling With the Punchlines, which added best-selling author to her list of achievements.

Urzila Carlson on the jokes she chooses not to tell.

Self-depreciation is something many comics tend to fall on. It's also a trait synonymous with Australian humour.

It's something Urzila says she initially leant on in the beginning. "You talk about what you know. I will talk about everything I'm going through: it's like trying to make it a conversation with friends," she shared.

But recently, Urzila has adopted a different strategy.

"I have changed a bit: I don't punch at myself as much. Because I never pick on my audience, I also don't do too many fat punchlines anymore. I don't want to give bullies any material. I'm a responsible user of a fat punchline, but I don't want someone to take that joke and use it to harm someone.

"It still shocks me how some people perceive 'fatness' or 'gayness'. It's good to normalise who you are. For example, I get a lot of bigger women who get in touch with me, plus the LGBTIQA+ community, saying thanks for being you."

Urzila Carlson on meeting her wife, and having kids.

Urzila met her now wife Julie when she was 32 years old. Sparks were immediate.

"I met her at a rugby game, where all good lesbians meet. We connected immediately," Urzila said on No Filter.

Although at the time, Julie didn't see herself as a lesbian. Prior to Urzila, she had never been with another woman.

"I don't think sexuality is as rigid as people like to think it is," Urzila noted. "For most people, it's first and foremost about personality and a sense of humour. It's not usually 'six-pack and a big d**k.'"

Within the first year, the couple were discussing their future, and the possibility of having kids.

"It was crunch time. So we actively looked into getting pregnant and luckily for us, it was instant.

"My approach has always been it needs to be manageable. If we're travelling with the kids, Julie can look after one and I can look after the other. If there was a third one, it would be a bit tricky. And even now on the big planes, a row consists of four seats, not five. So we figured two is enough, and financially manageable," Urzila said.

As for how things run at home, Urzila says what they have going on at the moment works for now.

Occasionally Julie and the two kids will join Urzila on her comedy tours, but most of the time, it's a solo affair, with Julie at home looking after the little ones.

"Julie has been with me since the beginning of my comedy career, so she understands it and is very keen to never go back to work, which logistically is fair. Julie is trained as a nurse, so she would be working odd hours exactly like me, so it just didn't work out," she said.

"The kids are small so as soon as they see me, they're on top of me, wrestling and are happy. But I'm sure when they reach the tween/teen phase, the time away from home will become harder."

As for her boundaries on privacy, Urzila shared with Mia Freedman why it's important for her two kids not to be in the spotlight.

"I share nothing of my kids on social media, the same with my wife. That's my line. Plus Julie and my boy are very shy. If when he or my daughter grew up and saw something I had posted years earlier [they didn't like], I can't take that back."

Urzila added: "If I didn't have this job I probably wouldn't have social media. Good things have come from it don't get me wrong, I've met some wonderful people. But there's a lot of nasty people online: it's a different beast."

For information on Urzila Carlson's upcoming tour, It's Personal, visit her website.