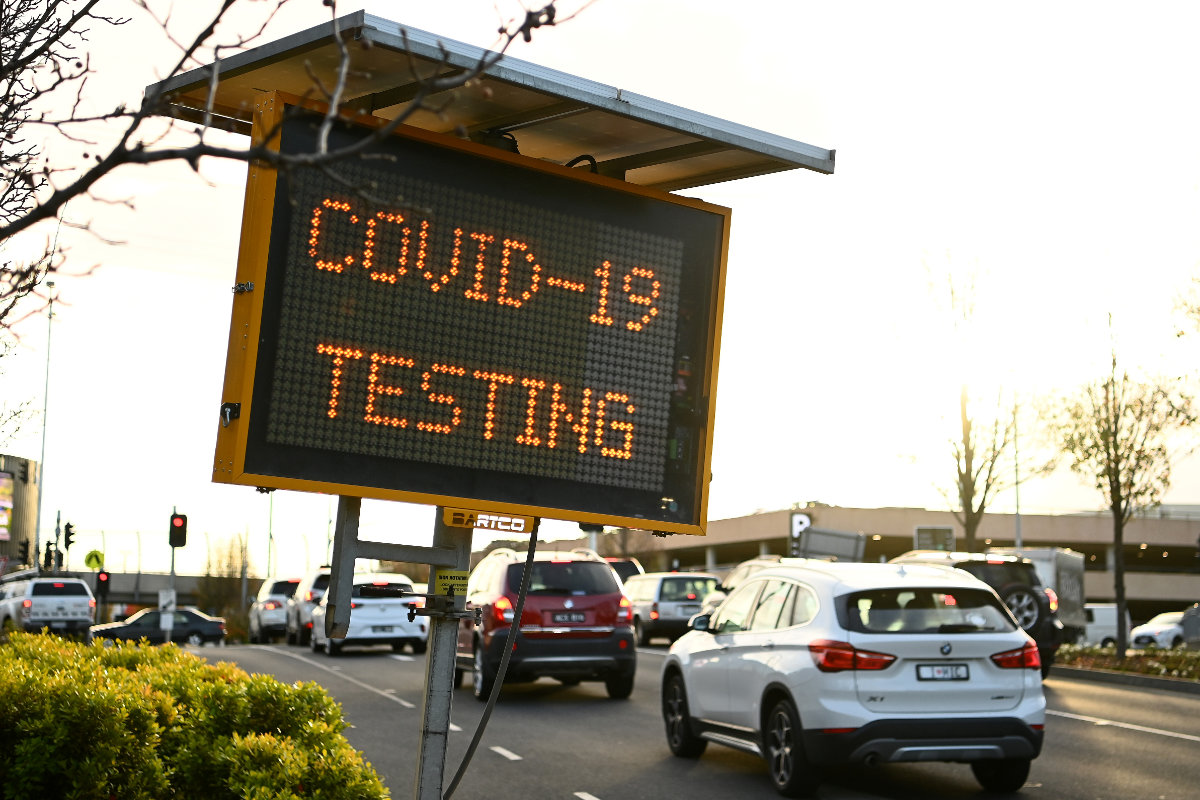 The past two weeks have seen an alarming peak in coronavirus cases for Victoria, which has now quashed plans to ease restrictions as the government races to slow the spread of COVID-19.

On Monday, 75 new cases were found, marking the state's highest single-day increase in over three months and its fourth-highest daily total since the pandemic began. This follows an increase on Sunday of 49 new cases.

This is the latest update on Victoria's second 'coronavirus peak'.

The latest on cases in Victoria.

One case is in hotel quarantine from overseas travel, with another 14 linked to previous cases. Thirty-seven were found through routine testing, and 23 cases are still under investigation.

Six are believed to be from community transmission.

Most, but not all, cases were in 10 known hotspots.

The total number of recorded virus cases in Victoria is now 2099, with 288 cases currently active. The state's death toll is 20.

Six schools in Melbourne have been shut for a deep clean following cases in their communities, although no students are in the classroom as it is school holidays.

On Sunday, Victorian Premier Dan Andrews highlighted just how infectious the virus is by saying some of the cases came from people sharing a cigarette lighter.

'It will get worse before it gets better.'

Victoria's Chief Health Officer Brett Sutton said the "clearly big numbers today" were "absolutely concerning" but it was too soon to say if hotspot suburbs would be put into lockdown.

"It would be a harder step but has to be proportionate," he said. "We know what the consequences are ... in terms of fatigue in people's positive behaviours.

"We don't want to drive people out of suburban areas into new unaffected areas. So there is a balancing act in terms of making the call on a lockdown," he said, indicating "we will use it if it is required".

Sutton said community transmission was happening because people were still going out with symptoms and socialising.

"I think it will get worse before it gets better," he said. "We know what works already. We just need people to do it."

How the government is reacting to the outbreak

The state government announced on Sunday they will implement mandatory testing for all returning travellers before they are allowed out of hotel quarantine.

Victorian Premier Daniel Andrews explained people in quarantine will be tested twice — first on day three and then again on day 11 of the 14-day quarantine period. He also added that an extra 10-day penalty will be imposed on travellers who do not get tested during their quarantine period.

"Those who refuse to comply with testing will be required to remain in quarantine for a further 10 days to ensure they pose no risk of introducing coronavirus to the Victorian community," he announced on Sunday.

“Much like a bushfire, putting this out is challenging,” Andrews said. “Containing it, though, is something that we can do, and [widespread testing and contact tracing] is the most effective thing to do.” 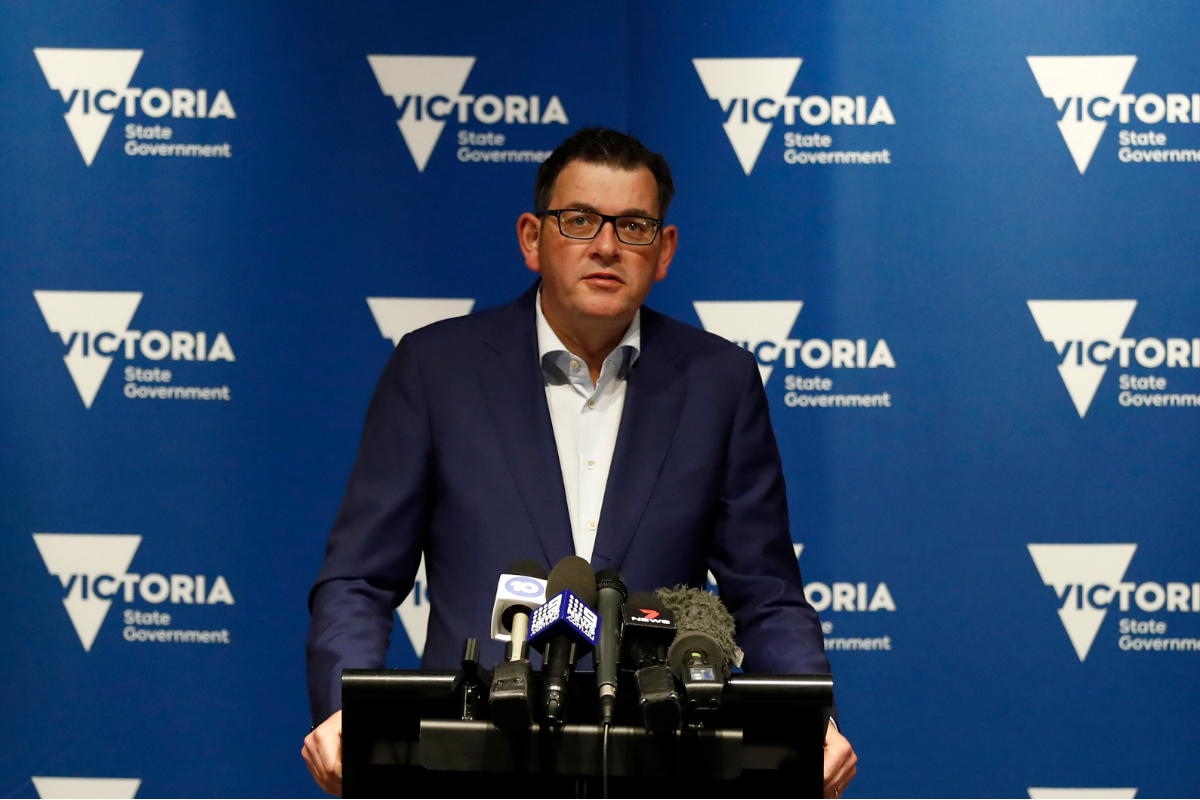 Victorian Premier Daniel Andrews addressing the media. Image: Getty.  The government also announced a testing blitz as part of their efforts to mitigate the spread, with about 40,000 people tested on Friday alone.

Health workers are going door-to-door in Keilor Downs and Broadmeadows, where there are large numbers of new cases, with mobile testing vans and expanded community engagement teams on the ground.

Andrews added that 780,000 tests had been conducted in Victoria since January 1 and the new less-invasive saliva testing would start from Sunday. Previously, swabs were taken from the nose, in what many describe to be an uncomfortable experience.

The Premier said the new saliva testing could be the key to encouraging more people to be tested.

"I think that we will now move into a much easier phase, because the saliva tests begin today, and I think what's driven the resistance of some parents to have their often very small children tested, is that it is not a pleasant procedure, particularly for a small child," Andrews said.

"But with the saliva test coming on board, I think we'll be able to get the numbers right up to 100 per cent."

The saliva test has a lower accuracy rate - 87 per cent - than a nose swab, but is likely to be considered more 'acceptable' to patients.

Prime Minister Scott Morrison said he would speak to Andrews on Monday to see if the state needed any additional support.

"Every resource" would be put into helping Victoria emerge from the pandemic, Morrison said.

"It is of a serious concern, but it is not surprising given the nature out the outbreak."

Reply
Upvote
1 upvotes
Can ScoMo build a wall around Victoria until they have the virus under control?  The incompetence of the Victorian Govt and Health department is astonishing.
km 5 days ago

Reply
Upvote
3 upvotes
That seems a little harsh...at the end of the day it's not the government or health department spreading the virus...it's individuals not doing what they need to do.
fightofyourlife 5 days ago

Reply
Upvote
2 upvotes
@km Yep, exactly. And directing your ire at the entire state is also a bit harsh. The outbreaks are all in Melbourne.
mrscoady 5 days ago

Reply
Upvote
@fightofyourlife and those of us in Melbourne doing the right thing, which is the majority are being unfairly judged adding to our stress - we have been in lockdown longest with the most restrictions, you would think our fellow states could show a bit more compassion.  .  I’m more than happy to never visit NSW OR QLD again with my family’s tourist dollar with the current attitude towards Victoria in our darkest hour. Very disappointing.
guest2 5 days ago