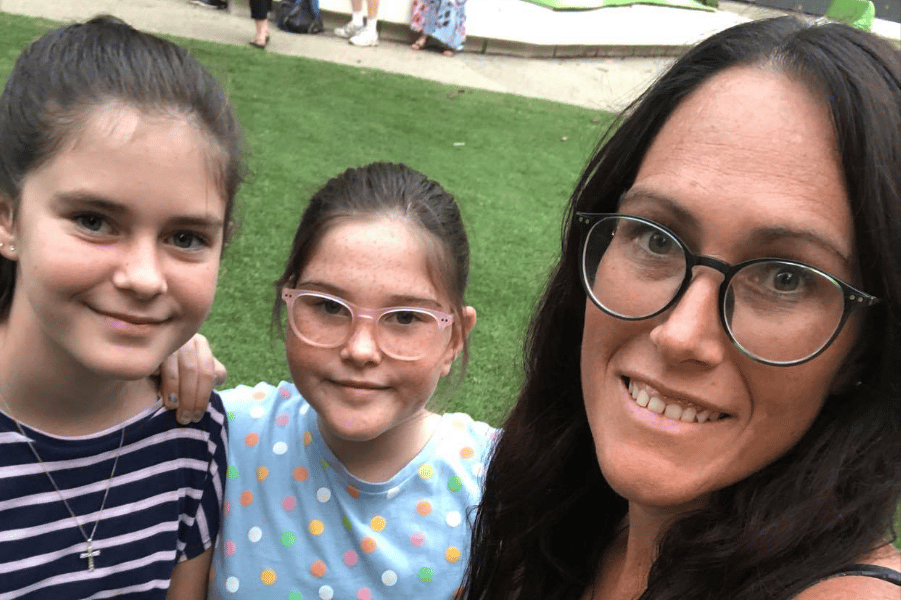 Amy, a 35-year-old single mother of three from Brisbane, never saw it coming.

In January, after a decade of hard work, she was head-hunted for her "dream job" in a data analytics and consulting role with a major firm. For the past decade, Amy had carved out a career for herself she is proud of, and the opportunity to switch companies earlier this year was testimony to that.

As the pandemic escalated in Australia, Amy moved to work from home like millions of other Australians, and she was actively involved in conversations on how to move the business forward in light of the health crisis.

On a Friday afternoon in early April, Amy discussed with the company the likelihood of them offering her a full-time position at the end of her three-month contract, which was approaching. It looked promising.

Then the following Monday, on April 6, she was just finishing her work, when she picked up the phone. Her boss was on the line. She remembers the conversation well.

"Thanks very much," Amy recalls the operations manager saying. "Unfortunately, we can't keep you. It's been great. If we can get you back, we will. But there's nothing we can do. I'm really sorry. We'll pay you for the day. But as of 3.30 this afternoon, we don't have work for you. You don't have a job anymore."

It was a mere two-minute conversation. 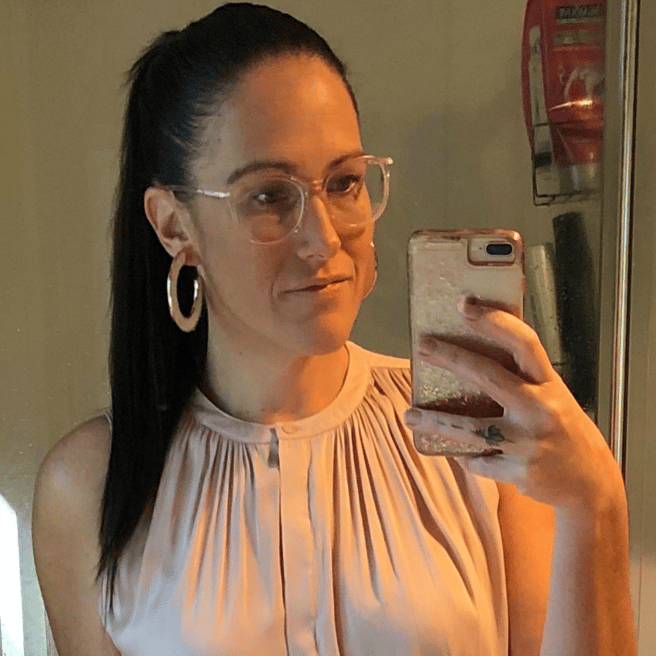 Amy lost her job in April after a two-minute conversation. Image: Supplied.  "I was absolutely shattered. I lost my breath for a minute. I got off the phone and I must have been crying so bad, my 15-year-old son came running out of his room, and said 'Oh my god Mum, what's happened?' All I could say was, 'I just lost my job’."

"I couldn't function. I was just in total shock."

Amy had seen news bulletins on the rise in unemployment. But as she explains, she never had even the slightest inkling that this might happen to her. As she sobbed in private, Amy's mum came over to cook dinner for the kids that night. ﻿

"It gutted me. Absolutely gutted me," she tells Mamamia.

Amy was in survival mode.

The next morning, she went straight to Centrelink to apply for JobSeeker. In the first four weeks of unemployment, whilst she waited for her first welfare payment to arrive, she exhausted all of her savings.

Yes, JobSeeker helps. It is a payment of about $1100 a fortnight. However, Amy's rent of $900 a fortnight takes nearly all of that.

"I also ended up having to get a couple thousand dollars out of my superannuation to cover my car payment and my bills. The prospect of September is terrifying," she explains, her voice cracking. "If I don't have a job, I literally don't have a house.”

In September, the $550 coronavirus supplement will cease, cutting the JobSeeker payment in half. When that happens, Amy can no longer afford rent. 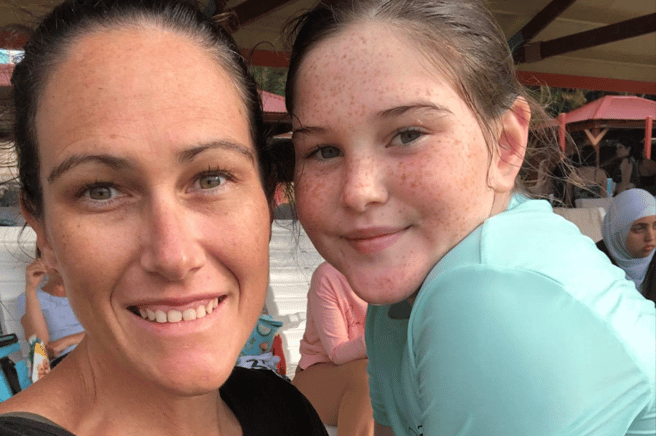 Amy with one of her three children. Image: Supplied.  So how do you prepare for an ‘economic cliff’?

"I have no idea. The odds of getting a rental property approved for a single mother, with three kids and no job, in this economy, isn't great. This will be the next big epidemic — homelessness."

Amy does have the fallback of living with her parents. But that would involve sharing one of two spare rooms with her two daughters, 11 and 10 years old, whilst her 15-year-old son takes the other spare room.

"I don't want to be a 36-year-old woman living at home with my parents because I can't afford to live by myself," she said.

She is doing everything in her ability to avoid that.

Amy has applied for over 150 jobs in the past three months. She's had seven interviews.

The reality of a recession, though, is that the job market is dire.

For every 18 Australians currently unemployed, there is only one job available, the Australian Unemployed Workers' Union (AUWU) revealed this past week. There are over 1.6 million people unemployed in Australia, and just under 92,000 jobs currently advertised on Seek. 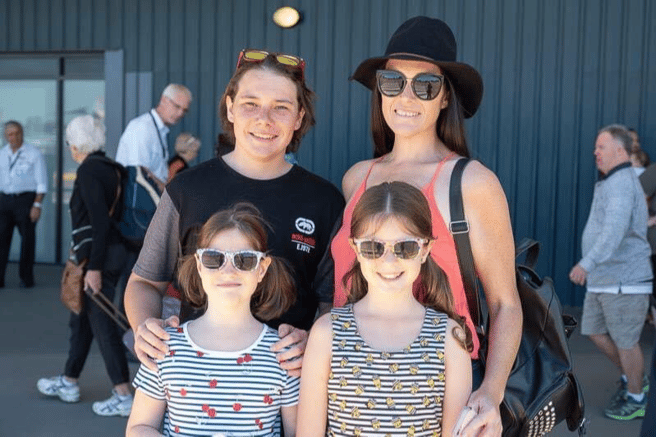 It is highly competitive, and Amy feels the weight of that every day.

"I'm competing with people who are in their early to mid twenties and who can afford to live on $45,000 a year and don't have kids. It makes it hard."

Not only is the financial impact devastating, but so too is the mental drain, compounded by the uncertainty of the future.

For the first time in her life, Amy is seeing a psychologist. She is one of the many Australians who are experiencing mental health woes during this pandemic.

"I realised that I had started to sink into a depression," Amy shares. "I never knew how much of my self-worth and my identity was wrapped up in what I did. I felt like I was going backwards. I felt like I'd done all this work and I had got so far and I was back at the start and it was exhausting. I'm 35 years old, I don't want to start again."

Listen to The Quicky, Mamamia's daily news podcast. On this episode, we discuss why female lawyers are speaking out. Post continues below.

Seeking help for her mental health has been pivotal in finding her purpose again.

"One of the saving graces for me mentally is knowing that it wasn't something that I did that caused this to happen. It was something that happened to me."

Whilst it has been one of the most difficult times, there are always silver linings.

"I've been so driven and busy for the last eight years, it's actually the first time that I've stopped, and I think my kids and I are closer than we were, because there was no running around."

As this article was about to be published, Amy sent a message: "I can’t believe it. While we were on the phone today, I was offered a role in procurement. It’s less than what I was earning and what I was doing, but it will get me through the rest of 2020 and I won’t have to worry about losing my house!"

"It is legitimately the first time in three months that I feel like I can breathe. This weight that I have gotten so used to being on my chest has been lifted."

After three months of desperation and dread, Amy has been employed for a full-time role on a six-month contract.

It is a bright beacon of hope, that is symbolic of the wise words she had told me just hours earlier: "This too shall pass."

Reply
Upvote
3 upvotes
Something that has struck me this last few months is just how close families and business sail to economic disaster.
D
david s 2 years ago