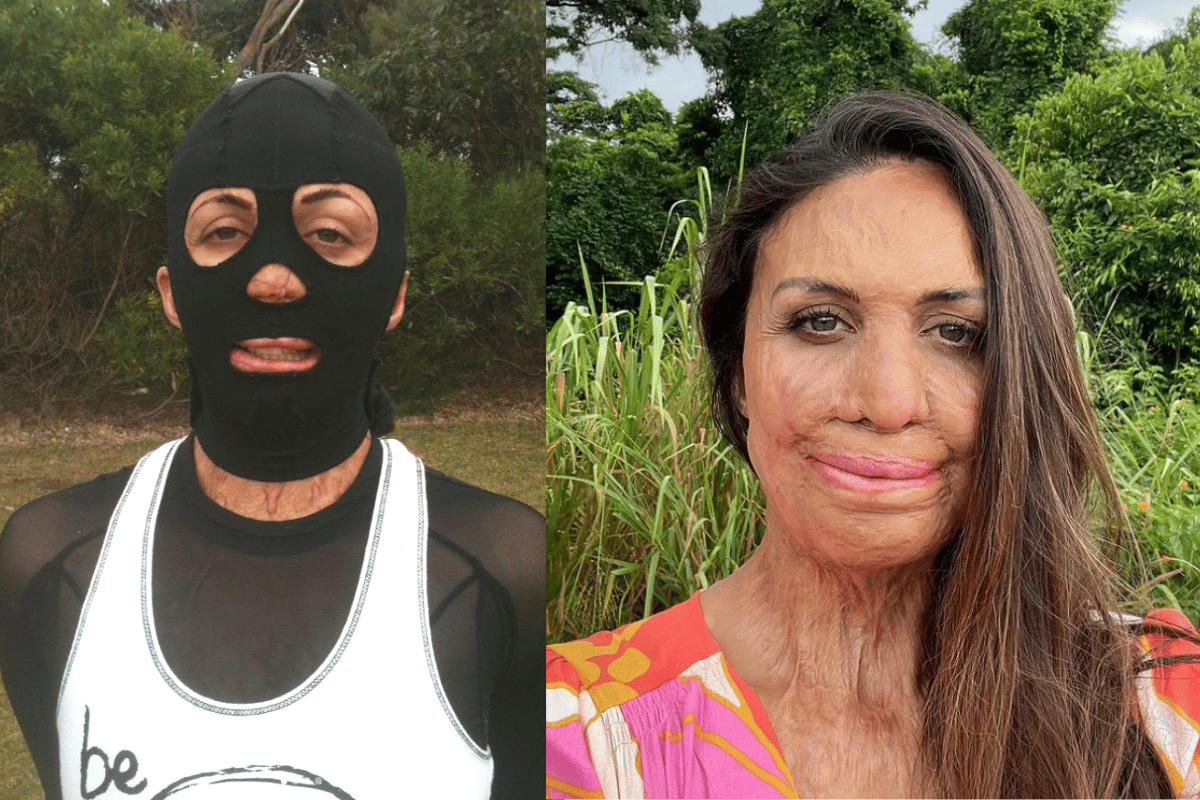 While competing in a 100km ultramarathon through the Kimberley region in Western Australia, Pitt found herself, along with seven others, trapped by a freak, out-of-control fire.

"One of the really striking memories that I have is all of us were on the valley floor and we could see the fire approaching, and at that stage, I was really distressed and panicked and I was crying..." Pitt told Mia Freedman on Mamamia's  No Filter podcast a few years ago.

"And one of the other men from the fire actually took the time to turn to me and he said to me 'don't worry, everything's going to be okay' and I think that's extraordinary. He just took that small moment, when his life was in danger and his son's life was in danger, to reassure me and… it just shows that humanity, the best in humanity can just show up in the worst times."

What happened next, which she estimates probably only took five seconds, would change the course of Pitt's life. With nowhere else to go, she was forced to run through a wall of flames, leaving her with full-thickness burns to 65 per cent of her body.

Hours passed before medical help arrived, and when they did, doctors did not expect her to survive.

Pitt's recovery took years and still she faces challenges as a result of that bushfire in 2011. But it's what she has done in those years since that defines her - raising much needed awareness and funds for causes close to her.

After Pitt was rescued by medical personnel, the recovery journey began.

She was placed in a medically induced coma and would lose seven fingers, spend six months in hospital and undergo more than 200 operations.

Reflecting on that, Pitt said: "Physically, it's pretty obvious what I've gone through. But for me, emotionally, I think, 'Well, the fire was only five seconds of my life, and I don't want to let that five seconds tell me who I am and what I can do and what I can't do in this world'."

She continued: "But every morning I wake up and I see my hands and remember what happened to me, but I just get out of bed and get on with my day."

And get on with her days she did.

She's written three best-selling books, coached over 40,000 people via her own digital courses, competed in the Ironman World Championships, sailed a boat around French Polynesia, walked the Kokoda Trek, met some amazing people and developed her own business.

She's also helped to raise more than one million for Interplast, which provides reconstructive surgery to people in developing countries in need.

And amid all of that, she has welcomed two boys with partner Michael Hoskin. Late in 2017, the couple had Hakavai, and then Rahiti, in early 2020.

In the early days of motherhood, Pitt said she and Hoskin had already begun preparing for the life lessons they wanted to teach their kids.

"We want to protect our kids and for everything to be good and great for them, I get that, but the truth is you can't stop everything bad from happening to your kid," she told The Advertiser. "I want to teach resilience; that no matter what happens, they have the ability to cope because challenges are part of life."

In an Instagram post, Pitt went on to say that parenting has its ups and downs, but it's something she's incredibly grateful for.

"Parenting is hard. I've got a baby that sleeps, a supportive partner, parents and in-laws on speed dial, heaps of mates who’ve had babies and I’m still finding it really challenging and exhausting. You know that feeling of falling in love? Having a baby is like having this feeling on tap. It's like the honeymoon phase that never ends."

In a conversation with Mamamia last year, Pitt said that trying to juggle being a mum, motivational speaker and author was quite challenging.

And then she realised it was okay not to have it all together. Because few - if any of us - do.

"That's pressure from society, but also ourselves that we want to 'get back into it' and get fit again and be able to make time for our partner and cook really great meals for our family. After I had my first son, I probably was quite hard on myself and that urge to not let my son interrupt the flow of my life, which I realise is such a ridiculous thing to want. Because how the hell can your life go back to how it was before you've had a kid?" she explained.

"It forced me to slow down and take stock and to savour my life and enjoy and relish the time with my baby. So I am thankful for that."

And to add just one more thing to her list, Pitt decided to take part in Celebrity Apprentice Australia in a bid to raise further funds for Interplast.

She wrote on Instagram this week: "Ok, so I'd never set foot on a reality TV set before @celebrityapprentice. But I knew it would be an awesome way to raise money and awareness. So I said yes!"

And in the first challenge, Pitt managed to raise $235,000 for her chosen charity.

Reflecting on what that meant to her, Pitt said: "I was stressed out of my brain [doing the challenge]. I just kept thinking of Interplast and raising as much money as possible for them, and worried that I was going to let them down."

She continued: "I've seen the types of injuries they're confronted with - kids with cleft lips, women who have had acid thrown on them, burns survivors. When I've gone on those trips, it's made me feel really grateful to live in Australia, and to have had access to the treatment that I have had. I wouldn't be here if I lived in a developing country. The work they do is so important."