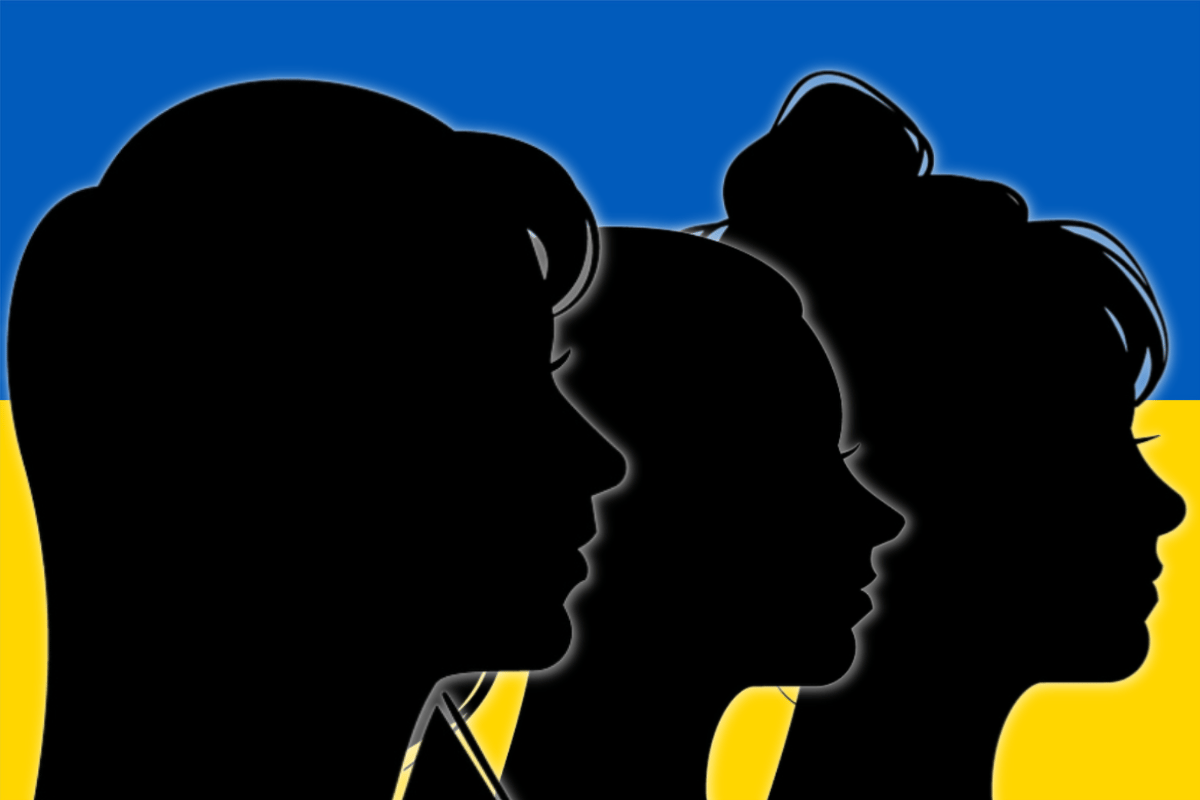 It was a blast so large that Aliza could hear the doors and windows of her father’s Kharkiv apartment clap through the phone to her home in Melbourne.

“The situation has changed much more drastically since we last spoke,” Aliza, 37, tells Mamamia in the late hours of Monday evening.

“It has become much worse.”

Aliza left her beloved Kharkiv in 2005 when she and her Australian husband followed their careers to Beijing. Three years ago, they uprooted again, this time to his hometown of Melbourne.

Just hours after Putin declared war on Ukraine, Aliza shared with Mamamia, that there was a Russian tank on the street outside her apartment in Kharkiv.

And she also shared her desperate worry for her sister and father who remain in the eastern city, just 40 kilometres from the Russian border.

In one apartment, Aliza’s sister, Viktoria, huddled together with her daughter, and son-in-law. They took in his grandmother too, terrified from the bombing of the airport near her home.

But Aliza’s father, Igor, remained in his own apartment in the Kharkiv’s Kholodna Gora precinct. He is 70 years old and disabled; partially paralysed from a stroke in recent years.

“He cannot run for his life, but he also said he won’t leave his home.”

And he is alone.

Two years ago, his wife Mila, visited Aliza in Australia. Then the pandemic hit, and she was grounded here. Just as Mila was making plans to return, tensions with Russia began to rise.

“My mum is distraught, crying all the time. We are just so worried for my father,” Aliza shared on Friday afternoon. 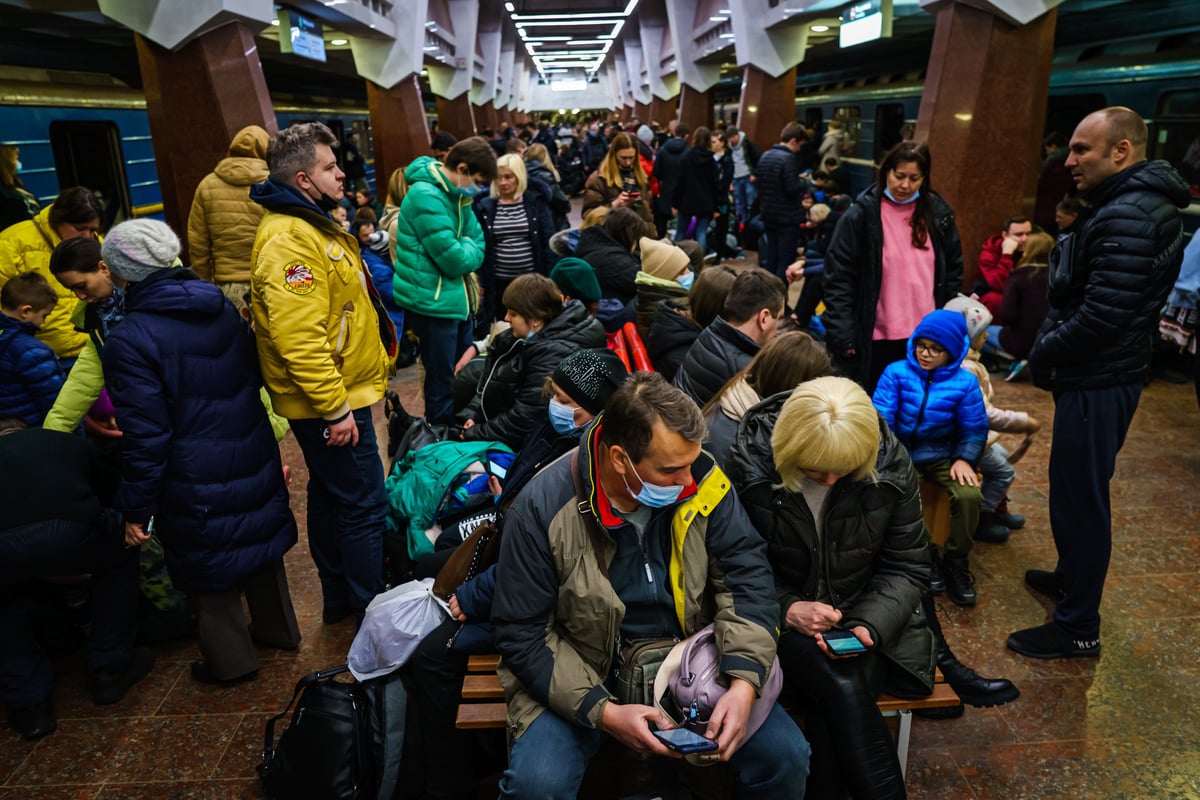 Then, Aliza was calm, articulate; her voice tempered with concern and contained fervour. By Monday evening, exhaustion grips her words, and it is clear: This is what five days of war sounds like for a daughter and sister from afar.

Five days of staggered communication, and ever-refreshed news updates, and fleeting moments of sleep, and the infrequent bite of food.

She tells, “My sister had to run in the middle of the night, because the bombing was getting too close.”

“They jumped in their car and left for western Ukraine. It took them a ridiculous amount of hours to get there through all possible obstacles – missiles and bombs and guns. Fortunately, they got there safely.”

“But my dad, unfortunately, stayed behind – and he’s the one I’m most worried about.”

A usual apartment in Kharkiv today
This is what Russia does in Ukraine. pic.twitter.com/SyRTXZvov7

Igor lives on the eighth floor of his building, and the elevators have now been switched off. His food supply is running out.

“At the moment, he can’t even go down the stairs because his left side is paralysed and all the handrails are on the left side as well.”

Aliza has frantically spent the last few days trying to find someone – anyone – who might be able to help him.

“My dad doesn’t have enough food… I’ve called everyone I know, I’ve written on all possible social media, but people are just saving their lives. It’s beyond their scope of what they can do at this moment… With the air-raid siren going off all the time, people don’t leave their basements, or bomb shelters, or subway. They’re not coming out.”

And then abruptly, our conversation halts.

“I think I should stop. I just realised, I’ve been dumping it on you at 11pm at night. I’m so sorry. It’s not your war. I really appreciate you trying to get to the bottom of it, but …. there is no bottom, there is no end in sight.”

“But he is safe,” she tells Mamamia from her first-story apartment in Kyiv. He is a member of the Ukrainian Police Patrol Department.

“He has to defend the city, so he is at work… His department is close to Zhuliany Airport, and they’re also protecting it.”

Yevheniia stays at home with her 22-month-old son. She decided against going to the bomb shelters – “It’s too cold inside. And a neighbour told me, you can’t last more than an hour there.”

She also doesn’t want to leave her cat, Moses, who is deeply distressed; he is not eating or going to the toilet in his litter tray.

Video has emerged of Jews in Kyiv praying as they take shelter from Russian air raids in an underground shelter. pic.twitter.com/stwAf6UenE

“Plus, I don’t want to leave my house because, this is my home. If everyone runs then what’s the point to protect? The soldiers are dying to protect our country.”

But Yevheniia’s defiance is not tinged without fear.

“When everything started, we didn’t know what to do. I cried all day – especially after I read the news. So much information is just exhausting.”

“But now, I’ve got used to it. During the day is okay, but the nights are scary because of the explosions and shooting.”

Two nights ago, “it was very dangerous”, with a battle taking place close-by, she tells.

“We almost didn’t sleep. I prepared all of our documents, money and food, in case we need to leave. But thanks to our soldiers, we are safe.”

“The sight of seeing people run down the street for their lives at the sound of the air-raid siren is also frightening”, but Yevheniia tries to stay away from her windows.

“We didn’t sleep well, didn’t eat. The safest part of the apartment is my bathroom. But it is impossible to sleep there.”

And while she might be 15,000 kilometres away in Melbourne, Yevheniia’s best friend Anastasia is also not sleeping or eating.

The two met 10 years ago when they worked together at a foreign exchange trading company in Kyiv. Anastasia was drawn to Yevheniia’s positivity and humour.

“We’ve had the best and worst together and travelled a lot together – all over Ukraine, Malaysia and Singapore, and St Petersberg in Russia,” she tells Mamamia.

“We talk every day, and she talks with my mum everyday.”

But these last few days have been “horrific”, she says.

“I don’t sleep, I don’t eat and the future is unknown. I think I got older by 10 years during these five days. I would describe it as fear and hopelessness.”

Although Yevgeniia’s hope for Ukraine's future continues to shine.

“I want him not to be afraid.”

With Russian hostility escalating over the past few months, 26-year-old Ukrainian-born Melbourne nurse, Maria, was keeping a close eye on the news.

For the past three years, she had been waiting on the approval of her parents' visa applications to bring them to Melbourne. Over that time, she worked in the frontline of the pandemic, including administering COVID vaccinations.

Increasingly anxious, three weeks ago, Maria made the decision: She flew to Ukraine to help get her parents out of Kyiv. To get them to safety.

And then war was declared. Now, the three of them are in hiding together.

“We were all pretty nervous about her going,” shares her cousin and close friend, Michelle, a Melbourne-based pharmacist. “But up until a few days ago, when this all started, she said it was very calm. She was telling my mum, there are no signs of war here. Like, it's completely fine!”

“Now, they can hear the bombs going off, and can see missiles in the sky.”

While refuge would be safer in their basement, it flooded with melted snow, and so they remain in their apartment.

“Even if they wanted to leave Ukraine now, they can’t.”

With martial law declared, Ukraine has banned all male citizens aged 18 to 60 from leaving the country. Maria’s father is 58 years old.

“They’re not coping very well,” tells Michelle, 27. “She's trying to be strong, I guess. But I think she's really, really scared. She doesn't know how she's going to get back with her parents.”

Maria told Michelle that initially they hoped to secure a car and escape to Poland – “but even if you have a car, many are being robbed by opportunistic criminals who know people are evacuating with money.”

“And the rail lines have been destroyed by bombs, so the train can’t take you to the border.”

Meanwhile, in Melbourne, Maria’s husband and Michelle’s family have penned letters to state and federal MPs, and been in communication with the embassy – desperate for assistance to get Maria's visas approved, and to a border.

Michelle’s mother and grandmother continue to cry as they watch the news.

“I think the worst part, just the complete feeling of helplessness,” reflects Michelle.

“It’s all well and good for the government to show support and unity by lighting up the buildings blue and yellow, but the people need support there on the ground.”

‘The fear and paranoia is real’

Despite migrating from Kyiv almost 30 years ago, the city remains at the centre of Sofiya’s heart.

She warmly remembers those times when strawberries were incomparably sweet, and weekends were spent at the theatre.

“It was always Ukraine and Russia together, like a sister and brother. I come here from the USSR. I can’t believe what happened now. I am very disappointed and upset. Last night, I didn’t sleep.”

Sofiya’s cousin, Valerie, an artist in his mid-70s, still lives in Kyiv’s city centre with his musician wife. He was oblivious to the war until she awoke him at 6am on Friday with a distraught phone call.

“He said, 'Don’t worry! Don’t panic!'… Well, I am panicked! He is very optimistic always.”

But Sofiya’s friends did not share Valerie’s apathy – many of whom have now been hiding in the Metro subway stations underground for days.

“My friends are crying to me on the phone. They are saying, 'What will be for my children? My grandchildren?'."

As mothers and children in Ukraine are fleeing to safety, men have been ordered to stay back and fight against Russian aggression. When asked about what was happening, this little boy choked back tears, saying, "We left dad in Kyiv." pic.twitter.com/D7CcbQwPNw

Irina migrated from Lviv (formely Lvov) as a refusenik in 1974. Her aunt and cousins remain in Odessa. She spoke with them briefly on Thursday, and they were “quite distressed.”

The following day, the family had their cars packed with full tanks of petrol, and were on standby to leave. Irina’s aunty was too frightened to speak on the phone again as planned.

“The fear and paranoia is real,” adds Irina’s daughter, Lily.

And with good reason. Etched deep into the collective psyche are the not-so-distant memories of Soviet rule. Indeed, Irina’s uncle was sentenced to 10 years of hard labour in the Siberian gulag – just for listening to the radio.

Irina’s parents, now also living in Australia, issued a new warning to the family: “Don’t post anything against Putin on Facebook! He’s got spies everywhere!”

Their anxiety is genuine – and not contained to those who lived through the Soviet years.

As you would have noticed by now, every single woman who spoke to Mamamia has chosen not to share their surname. Some wanted to share photos, but then decided against it. Other women were initially keen to speak, but later changed their mind.

Indeed, the fear is very real.

Of what is. And of what will be.

For more information on how to help the people of Ukraine.

Keen to read more from Rebecca Davis? You can find her articles here, or follow her on Instagram,   @rebeccadavis___