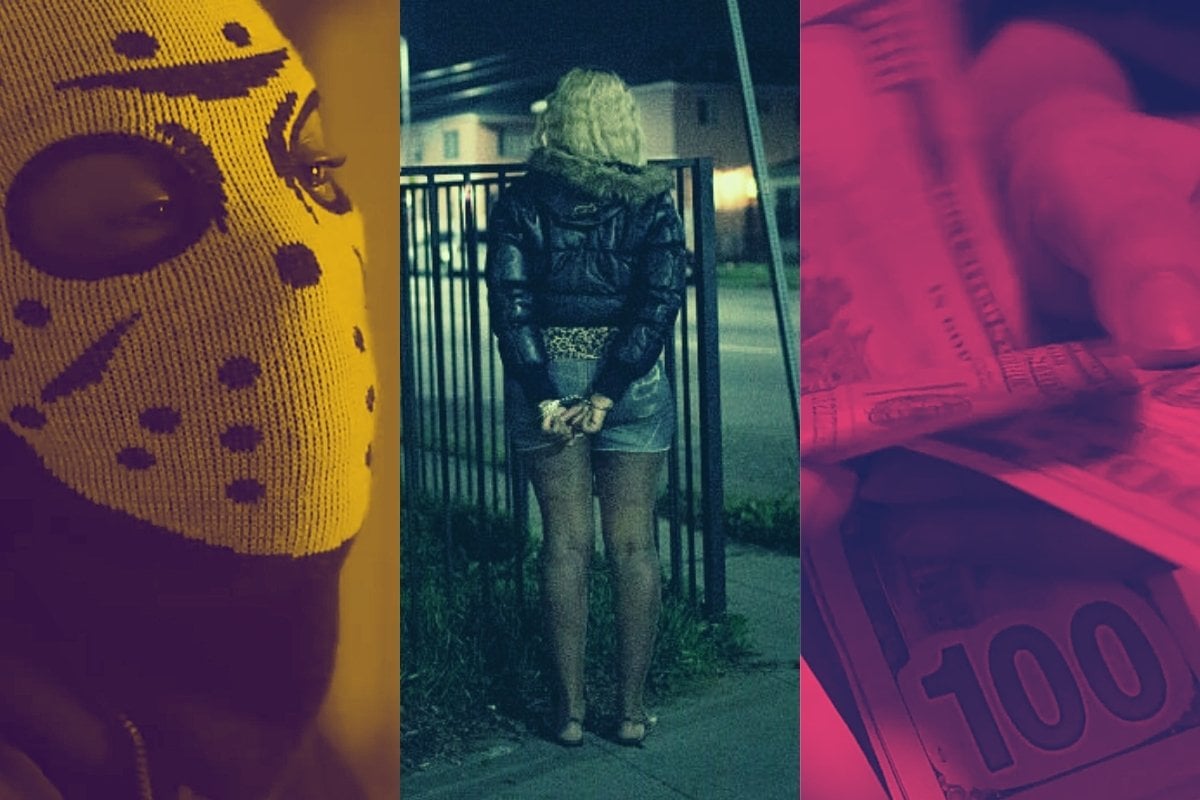 Warning: The following deals with violence and abuse.

But no underworld figures proved harder to pin down than California's pimps.

These, the Portuguese-born reporter discovered, are people hiding in plain sight. Some stake out the corners of Los Angeles' notorious Figueroa Street, monitoring the women whose bodies they profit from. Others are on Instagram, flaunting their wealth, their recruits and their champagne lifestyle.

"You think of these black markets, in general, as something that happens in the darkest, most secretive corners of our world. And in fact, what we found when we started trying to reach out to pimps was that a lot of them are online. They are advertising their services online, trying to recruit girls to work for them," Mariana told Mamamia's True Crime Conversations podcast.

Watch: Trafficked with Mariana van Zeller takes you inside criminal networks from the cocaine trade to sex trafficking. Post continues below.

Yet it was months before any agreed to speak to her.

What Mariana learned about their tactics of recruitment, their means of operation and control exposed the inner workings of one of the darkest illicit industries in the world. Sex trafficking.

"You can go anywhere to crack a female."

There is voluntary sex work; the kind in which people — mostly women — participate of their own free will and even enjoy what they do. And then there's the world of sex trafficking.

The latter involves victims who are forced, coerced or defrauded into participating in sex work.

The pimps who Mariana spoke to leaned heavily on the word "choice" when describing the women working for them (usually between four to nine at once). But in the next breath, they confessed to keeping the majority of the women's money and to beating them for acts of perceived defiance.

One explained how he cut the bottom of one woman's foot with a razor when she tried to run away; a crime he justified with the insistence that other pimps are doing "way worse". They're kidnapping women, he said, tying them up, preventing them from speaking to their families, even killing them.

Speaking to Mamamia's True Crime Conversations podcast, Mariana said it was difficult for her to continue the interview at the point, to engage with a man capable of such unsettling rationalisations.

"We were in a small motel room in LA, and I just wanted to run out of there as fast as possible," she said.

"But then you stay and you start asking questions... You start listening to his story about how, in the neighbourhood where he grew up, the heroes and the ones that were really able to provide for their families were the pimps.

"Obviously, you never condone the act; it's awful what he does. But at least there's a little bit of an understanding of why a person like him becomes a pimp. I think that is key to all black markets: understanding what's at the root cause."

Poverty, lack of opportunity, poor access to quality education and housing, addiction and family violence, are among them. For both the perpetrators and the victims.

One woman, whose parents weren't in her life when she was a child, told Mariana that she was pushed into sex work by a friend's father, who worked as a pimp, when she was just 12 years old.

"It's really tragic. It's horrific. We found that a lot of the women that go into this life are women that come from broken homes," Mariana said. "They are the easy victims."

The traffickers find these vulnerable women through a variety of means.

"[I approach them] on the street, nine times out of ten," one pimp told Mariana. "Sometimes Instagram, sometimes Facebook."

Another described setting up the VIP section at a club and inviting women over to drink and party with them: "They see the glitz, the glamour, the gold, the cars, the bikes, they want to smoke weed, do coke or ecstasy. A couple of days after they been there, [we say] 'Ok you gotta come up with some money.'"

Another said, "You can go anywhere and crack a female. Anywhere... We become friends, talk about how we can make money, then if they're willing to go along with the situation, we go do this."

A former pimp, known as Micky Royal, told Mariana that the easiest targets are 'Jan Brady' types; a reference to the often-overlooked middle daughter in the '70s sitcom, The Brady Bunch.

"I would show Jan the majority of the attention and point out how Jan is much prettier than her sister, Marcia. And Jan, when she leaves my presence, she goes back to being ugly in that house. So her self-esteem, her sense of empowerment, her will to be number one or the fact that she is number one, is only present when I'm around. So she's going to be around me more and more."

"He knew that there are a lot of women that are coming from out of town. And he would know exactly 'she looks young, she looks like she has bags, that she's just moving into the city.' And those would be the women that he approached and tried to recruit."

As Micky writes in his book, "You take away everything she has and then give her what she needs. You, the pimp, are the cause, as well as the solution, to all her problems.

"You give her the poison then sell her the cure."

To hear more from Mariana van Zeller, listen to True Crime Conversations 'The Ugly Business of Illicit Sex in America' below or via your favourite podcast app.

If you have experienced sexual assault or domestic abuse, support is available. Call 1800 RESPECT (1800 737 732) to speak to a trained counsellor.

B
beachhouse84 9 months ago

Reply
Upvote
1 upvotes
Those tactics sound similar to my abusive ex bf “ You take away everything she has and then give her what she needs. You, ...., are the cause, as well as the solution, to all her problems.“
R
rush 9 months ago