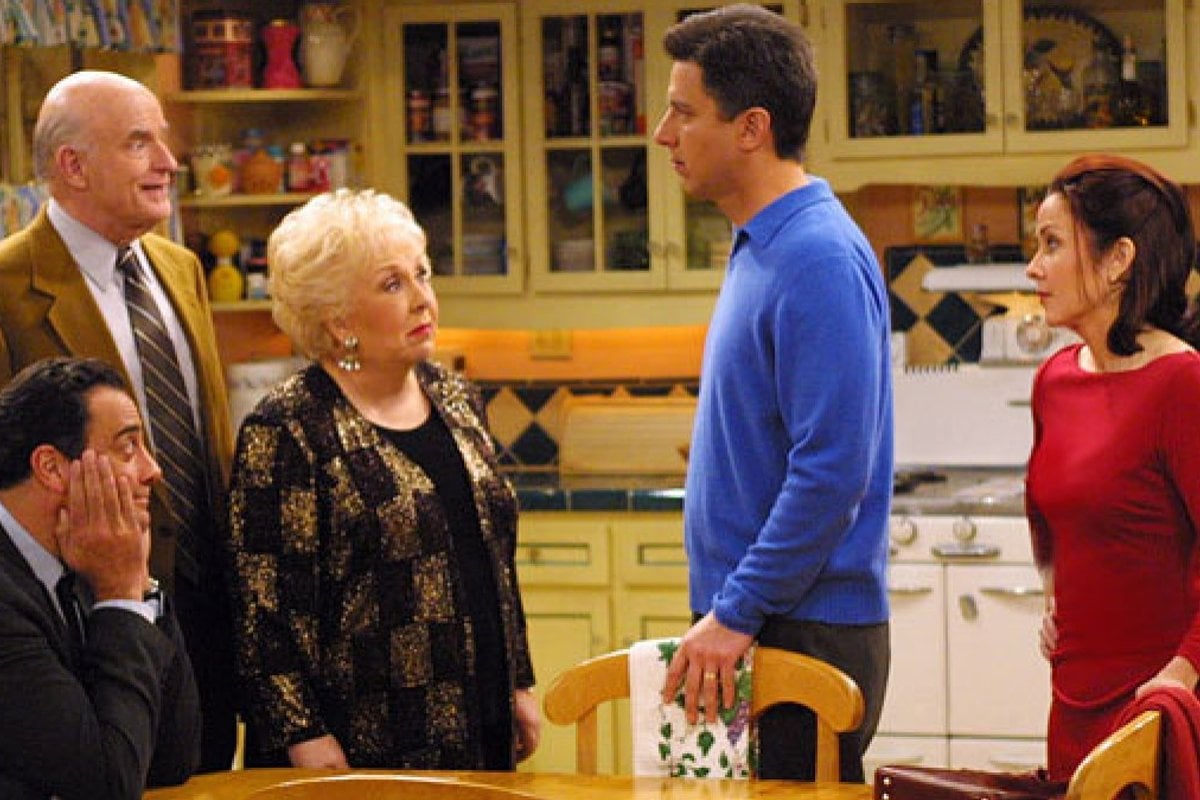 This post discusses miscarriages and death of loved ones. It may be triggering for some readers.

The ideal family is hard to come by, and even the ones we do choose can sometimes be an absolute nightmare.

We want our families to last forever, to be supportive, giving and most importantly, loving. But in some cases, this simply doesn’t happen.

While many of us do have loving and healthy relationships with our parents-in-law, some of us do not. In fact, some in-laws are toxic. Very toxic.

So to shed light on those who unfortunately don't have the best relationships with their in-laws, we decided to ask women to share the single worst thing their parent-in-law has ever said to them. Because trust us, you're not the only one.

Watch: Can you cut out toxic relatives? Post continues below.

“My father-in-law (FIL) told me, 'That's not what a good Catholic girl would have done', after I'd scored a free chocolate bar that day, as the checkout person forgot to scan it and I didn't realise until I'd left the store, and didn't bother going back in to pay for it. Ouch. Why ya gotta bring religion into it?”

“My mother-in-law (MIL) arrived for a visit. On the second day she asked where Harvey Norman was and told me she needed to buy me a new vacuum cleaner 'because clearly yours is broken'…”

“After we moved into our new apartment and my FIL saw it for the first time, he said nothing nice about it and instead just said, 'to be honest I can't believe you stayed so long in your last place - it was the most hideous apartment I've ever had to step foot in'. Umm thanks?”

“Six days after my father passed away, my in-laws were trying to organise a lunch. I said I was still incredibly broken and they said to me that they had 'gotten over it quickly and moved on'. My dad was a fit 58-year-old man who died while out exercising.”

“My mum was in a nursing home with dementia and my dad had died suddenly while at home. My MIL said: 'Shame, it would’ve been better if it was your mother'. My mum lived for another five years, and although unwell I’m happy to have had her around. Plenty more where that came from.”

“Four days after my husband died, we were looking at burial plots. My parents-in-law told me: 'It’s okay not to get a double plot. You are young and you will love again.' He died by suicide and I did everything I could to save him. That moment cemented what they thought about us and our relationship.”

“My ex-boyfriend's mum called me a whore from another room, loudly enough so I could hear. I left the house upset, then she complained I was rude for not saying goodbye.”

“We found out that my parents-in-law excluded our daughter from their will. Biologically she was not my husband’s, but he had raised her from nine months old and my in-laws were Grandma and Grandad.”

“While my MIL held my newborn baby (her first grandchild), she was asked by my (soon to be) husband (we were 24 and had been together 7 years at the time) 'why haven’t you said congratulations?' She said, 'anyone can get their girlfriend pregnant. That’s nothing to be congratulated about.' While. She. Was. Holding. Him!”

"The dad of my high school/uni boyfriend of four years never liked me as I was from the sh***y town and they were from the neighbouring posh town (UK class wars). One day we were all watching TV awkwardly, and their favourite family show Frasier (this was the 90s) started. I said something about how I didn't know much about it and he said 'that's because it's an intelligent show for mature people' OUCH. Whatever. I still don't get the appeal of Frasier."

“[My FIL told me] I was the ruin of their family and all the bad things that had happened in their family could be traced back to me. (Not true but irrelevant to the person that said it).”

“My now ex-MIL asked me 'what’s his name again' six months after our son (her grandson) was born!”

“She tried to console me when I had awful periods (I ended up needing a hysterectomy). She could see I was in pain and sympathised. She asked how many days I'd been in pain and I said it was day 10. I said I was keeping my husband up as I was vomiting through the night. Then she said: 'well poor Tom*. You know, 10 days and counting without it, they'll look for it anywhere!'”

"The problem with my in-laws is that the pattern of toxic behaviour from my FIL has been enabled for so long by the extended family that I'm made to feel like an arse when I won't tolerate it. When my daughter was seven she beat FIL at cards and was happy, not bragging or rude just pleased with herself for winning go-fish. FIL's response to her joy was to tell her, 'No one will ever want to marry you if you win all the time'. His misogyny is so deeply entrenched that when I told him his comment wasn't okay he stood up and screamed in my face that I 'needed to get a sense of humour'. The extended families response was "'Oh that's just FIL, you should just ignore him'. Well, I'm not willing to ignore toxic harmful behaviour directed at my children by my in-laws just because they're all conditioned to it... We don't see much of them anymore."

“My MIL was at a family member's birthday party and she ate a cracker with dip. My FIL’s parents were also there and my husband’s grandmother told her husband not to give my MIL any more dip and crackers because she needed to lose weight. I was appalled on my MIL behalf and she told me that her own MIL had been making little digs like that for years.”

“She said it was a shame I didn't get that 'pregnancy glow and got terrible acne instead.'”

“[She told me] her grandmother was sad that my sister-in-law was pregnant and not me (eight weeks after our miscarriage). When I questioned her why she would be sad about that, she said 'well you know after you lost yours'. I questioned how her grandmother knew we were pregnant to begin with, when we had specifically asked her to tell no one until we hit the second trimester. She confessed she had told all of her family straight after we had called her to tell her we were pregnant. [We were] eight weeks, and she admitted how hard it was for her to tell everyone we had lost the baby.”

“My FIL screamed at me that he never liked me and had only been pretending for the last 10 years. Another time I was pregnant with twins and they came to see the baby room we were preparing. When they saw the twin pram, they questioned if it was a good idea to be buying things like that during a high-risk pregnancy, as many twins don’t make it!”

“She told people I was faking pregnancies when I’d had recurrent miscarriages and we had to do IVF to have our babies. When I was a stay at home mum, with a newborn and 18-month-old, she said about another mum: 'she goes to work she doesn’t sit at home like you'. They also criticised me when I kept my baby's car seats rear-facing after six months, what I dressed them in, AND what I fed them. Arrrrrgghh!!”

“That I’m letting someone else raise my children by sending them to childcare so I can return to work… This came from a MIL who works in childcare.”

“My MIL brought up me getting pregnant (three months after we had miscarried our first baby). When my husband called her out on it, she got upset and said she doesn't feel a part of the family because I won't talk about it with her.”

“After having my first baby nine weeks premature my MIL said: 'well, what did you do to cause this?' Then the second one arrived six weeks early, and she commented: 'again? Are you ever going to get this right?'”

“When making an effort to bond with HER expat neighbour, she reprimanded me in public, scowling and yelling in disgust: 'we speak Australian here in Australia'.”

Listen to No Filter with Mia Freedman, where each week as she has candid conversations with interesting people who have fascinating stories to share. Post continues below.

“About her son and mine's wedding: 'I felt the best man’s speech didn’t focus enough on me.'”

“My FIL (father-in-law) used to indulge in alcohol, on a regular basis, much to the displeasure of my MIL. During one Christmas, he was drunk, and cornered me while cleaning in the kitchen. He told me that if my MIL died before him, he would disinherit my husband’s older brother, who he (and we) did not get along with. He also told me I wasn't to tell my MIL about his plan. I was gobsmacked. What could I say? I asked him not to do that, for a number of reasons, including that it would make life very difficult for us and my husband's sister. He tried discussing it with me again on several occasions after that, and each time I would ask him to talk to my husband about it, as I really didn’t want to be involved with it. As things turned out, he passed away a few years ago, and my MIL is still with us. I hate to think what would have happened if he was able to follow through on his plan.”

Reply
Upvote
My MIL put me in hospital when i was 37w pregnant. She threatened me and my baby and assaulted me (She was a drunk) .. I had to go to hospital and try and convince a social worker it wasnt my partner who had done it to me.
H
hillariousmac 24 days ago

Reply
Upvote
My FIL told me I was a “fucking idiot” when I explained the reason my father wasn’t “giving me away” at our wedding was that I was not a piece of property to be transacted. A decision which was mine to make, and which my own father understood and respected, without question.
News
General
Opinion
True Crime
Politics
Sport
Explainer
Entertainment
Celebrity
Reality TV
Movies
TV
Books
Rogue
Royal
Lifestyle
Beauty
Fashion
Weddings
Home
Wellness
Health
Fitness
Travel
Food
Parents
Before The Bump
Pregnancy
Baby
Kids
Teens
School
Parent Opinion
Work & Money
Money
Finance
Career
Lady Startup
Relationships
Sex
Dating
Separation
Friendship
Family
Real Life
Couples