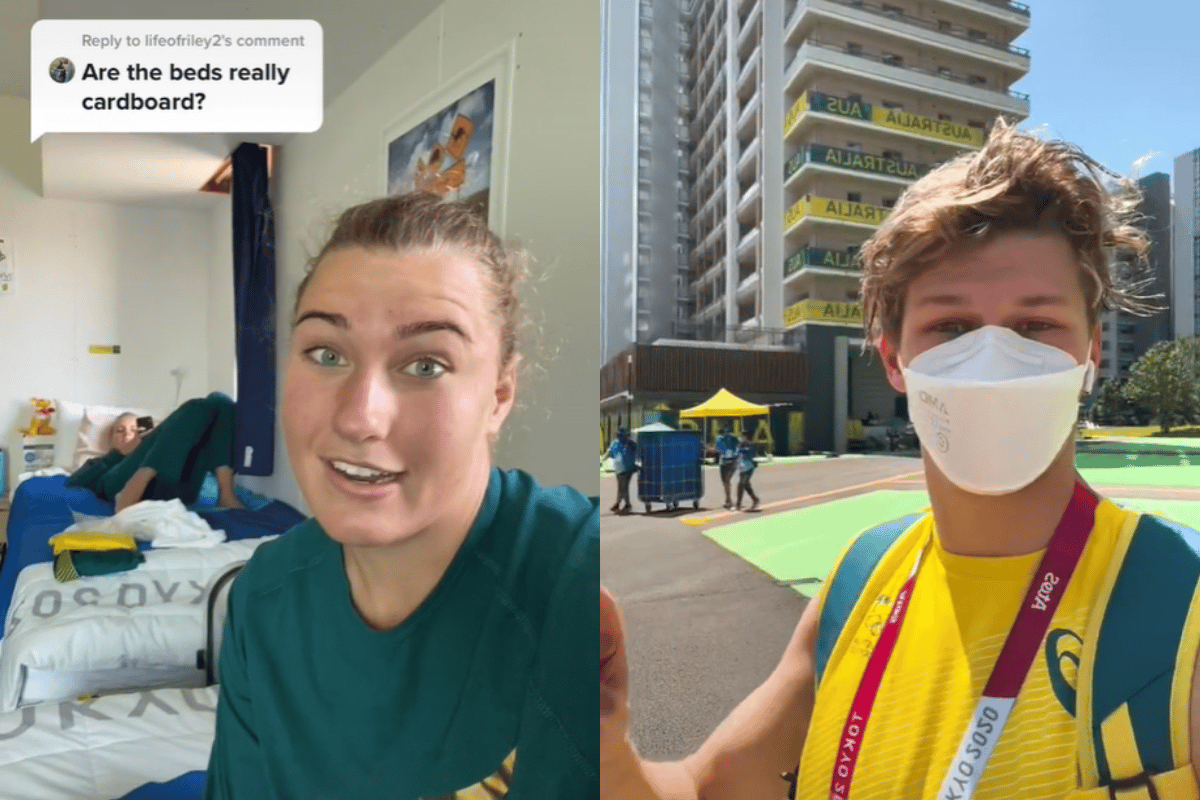 In lounge rooms all over the world, millions of us have been tuning in to watch the 2020 Tokyo Olympic Games.

And as the first Olympic Games to be held during a pandemic, it's no surprise things look very different this year.

Not only are there no crowds in the stadium, but measures have also been put in place behind the scenes in the Olympic village.

And thanks to TikTok, athletes including Sam Fricker and Melissa Wu have given us a glimpse into what life is like inside.

From cardboard beds to what they get up to in their downtime, here's what it's like for Aussie athletes staying in Tokyo at the moment.

A look around the village and the 'Australia tower'.

This year's Olympic village features 23 buildings that are designed to house a whopping 12,000 people.

And thanks to diver Sam Fricker and tennis player Luke Saville, we know exactly what it looks like inside Australia's block.

The building, which is decked out in green and gold, includes a room full of Aussie snacks (a must) and a rogue statue of an emu (less of a must).

I'm not even at the Olympics due to my injury but my fiance is there! he's gonna share some videos with me and I will share them with you! ##olympics

The village also includes a gym for athletes to exercise and (most importantly) free vending machines with you guessed it, more snacks.

Inside the athletes' rooms.

By now you probably would've heard rumours that the beds in the village are made out of cardboard to stop athletes from getting ~intimate~.

But while water polo star Tilly Kearns has confirmed the beds are in fact made out of cardboard, she says it's for an entirely different reason.

Tilly also explained that they can customise the mattress to make it as soft as they like and are given mattress toppers "to make it even more comfortable."

Reply to @lifeofriley2 Beds in the Olympic village, YES they are made from cardboard 😋

When it's time to eat, athletes head to the Olympic dining hall, which Sam Fricker says is essentially "the only time we don't have to wear our masks."

Tilly Kearns also explained that athletes also have to sanitise their hands, wear gloves and eat between divider screens to stay COVID-safe.

The screen "makes mealtime conversations pretty difficult, because it’s hard to hear through them, but it keeps us safe," she said in a video.

She also added that her team have a rule that "once the mask is off, we only have 10 minutes to eat".

Olympic dining hall COVID protocols ##olympicspirit ##tokyoolympics ##olympics ##australia what else do you want to see??

As she explains in her video, Melissa has to submit a sample of her saliva and have her temperature checked every morning before recording it in a tracing app.

The first and most important thing we do every morning at the Olympics! ##tokyo2020 ##olympicspirit ##covidsafe

What athletes do in their downtime.

When they're not busy competing, athletes get to enjoy some well-deserved downtime in the athlete's lounge or one of the designated 'relaxation spaces'.

Luke Saville even filmed a video of some of the athletes playing cricket in the village.