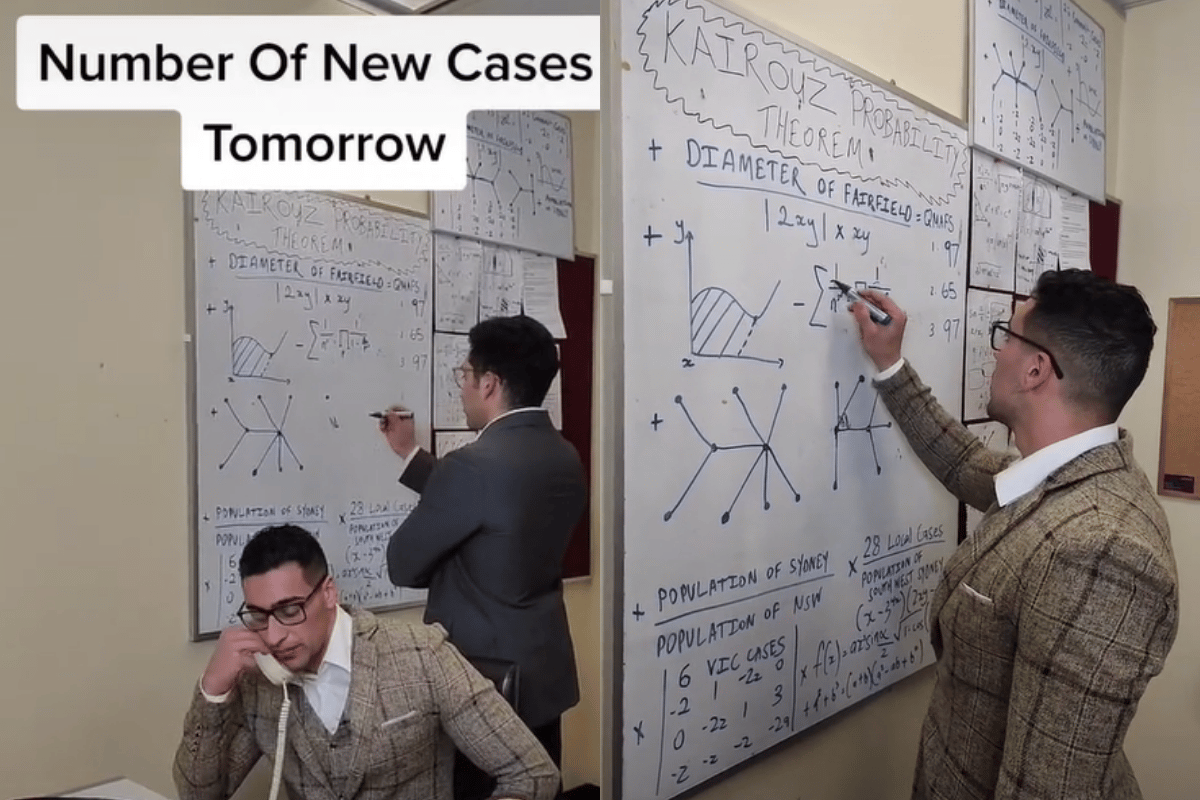 Over the past week, the 25-year-old comedian has become pretty darn good at guessing the daily COVID-19 case numbers in NSW. And by 'pretty darn good' we mean he's accurately predicted the correct number for FIVE DAYS IN A ROW.

Anyone who watched the 11am press conference this morning will know that was 100 per cent correct.

The day before, he accurately guessed that NSW would have 111 cases of community transmission on Saturday, June 17.

So how is he doing this? Well, that's what everyone's asking.

While many have (understandability) suggested that he receives information from a source at NSW Health, the 25-year-old maintains that it all comes down to "simple maths".

Speaking to news .com.au, Kairouz claims he uses data based on the previous day's results and looks at cases infectious in the community as well as the diameter and circumference of hotspot areas and population areas.

"I know how many cases there’s going to be tomorrow, no need for an update Gladys," he said in a video when correctly guessed the number of cases last Wednesday.

"Given that there’s 30 infectious cases in the community, plus how contagious the Delta strain is, you also have to factor in the circumference of southwest Sydney, plus the amount of households in Fairfield with 11 children, I can conclude there’ll be 97 cases tomorrow."

Naturally, his eerily accurate predications have caused quite the stir online. So much so, that Premier Gladys Berejiklian was asked about the TikTok star during a press conference on Friday.

"All we can do is focus on the job at hand," she responded.

"I know at the moment a lot of people have, or [are] alleged to have, various bits of information and advice but what is important for us as a team - team New South Wales - is to focus on what is necessary and that is to lead our state during the most challenging of times."

Kairouz has also claimed that he received a phone call from a NSW Health worker requesting that he stop posting the daily cases numbers.

The TikTok star told news.com.au that a man reportedly told him it was in his "best interest" to stop sharing the videos, otherwise there could be "consequences" for Health staff.

"He said we would have to cease giving out the numbers because we’re compromising the public health system," Kairouz told the publication on Friday.

He apparently told the worker that he doesn't have a contact at NSW Health and has just been using maths.

"I’m not going to be intimidated. It’s a bit of fun at the end of the day."

A
azzuri 3 months ago

Reply
Upvote
1 upvotes
News has it that a NSW health official leaked the information to this so called "TikTok comedian" and he has been busted. His quote "it's a bit of fun at the end of the day" really?? Fun is not a word that I would use to describe Covid cases. Annoying and frustrating come to mind.
M
mamamia-user-482898552 3 months ago

Reply
Upvote
1 upvotes
@azzuri Yes, making this into a game of prediction is trivialising what those numbers actually represent. Some of those diagnosed will die. Others will be very ill. Overall, they represent continuing hardship for those in lock down. Giving this guy attention and oxygen is insulting and hurtful to those who are affected by those numbers.
G
gu3st 3 months ago

Reply
Upvote
3 upvotes
Yeah. Health Department mole in pocket.
Hiding behind the handkerchief.
Edit: Just to flex a touch - I said this before he was offciially outed. His accuracy was impossible.