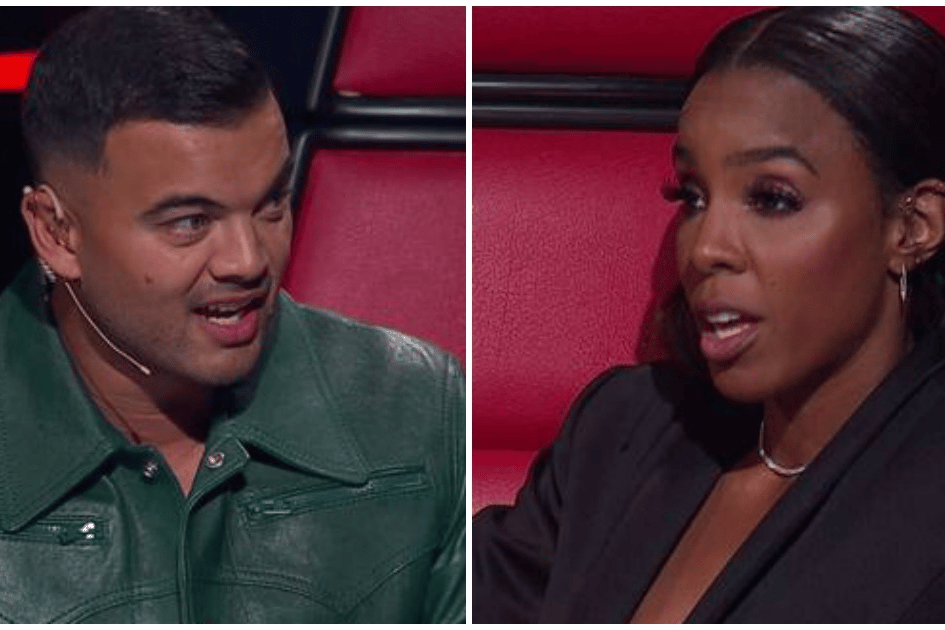 I can say with certainty that there have been 1,352 seasons of The Voice. And most all of them go exactly the same way:

Lots of talented people (and some average ones) sing in front of the judges during the Blind Auditions. This is by far the best bit, because can they sing, will the judges turn, who will they choose, etc.

Next comes the Battles, where the judges (now understood to be 'coaches') pit two of their team members against each other, to sing a song that definitely only suits one person's voice. Then everyone argues about who was the best, and the coach chooses one person to remain on their team.

But there's also SAVES. Each coach has two Saves throughout the battle rounds, that they can use for any contestant who gets eliminated.

This is where things get confusing and decidedly less interesting.

The next round is the Play-Offs.

But wait, isn't that the same as the Battles, you ask?

Yes. But also no.

In the Play-Offs, two contestants go head-to-head to sing a different song, and if a coach chooses to keep an eliminated contestant, it's called a Wildcard, not a Save.

Then there's the Showdowns, the Finals and the Grand Final, and honestly, the whole process appears to only take like two and a half weeks.

And that's the problem. When you've done the same show, with the same format, one million times, something needs to change. That's why someone evicted the Madden brothers at one point, and traded 1 x Jessie J for 1 x Kelly Rowland.

So this year, I have it on good authority (I made this up) a producer at Channel 9 has sat in a boardroom, looked around thoughtfully, and come up with an idea.

"WAIT. Boy George can stay..." he's said, receiving a shocked look from the English singer sitting in the corner.

His wave of inspiration likely came from another Channel 9 show, Married at First Sight.

"...Drama, but not toothbrush in toilet bowl drama..." he's added, looking uncomfortably at his boss.

And so this season was born, and all of a sudden THEY'RE TRYING TO MAKE EITHER GUY OR KELLY A VILLAIN AND WE SHAN'T BE HAVING IT.

First, it was Guy's very important rule breach during the Blind Auditions.

If you missed it, the drama started when a man with an exceptionally deep voice walked onto the stage and performed 'The Sounds of Silence' by Simon and Garfunkel.

It was quite good, and Guy seemed to like it very much. But there was a problem.

But he turned around... anyway. And Kelly lost it.

"You cheated. You are cheating," Kelly said.

"It's impossible!" host Darren McMullen yelled, and clearly... it wasn't? Like his chair was fully functional? 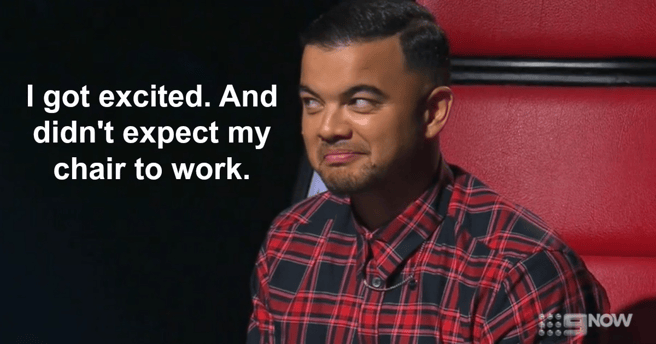 Everything descended into madness with Boy George shouting "I FEEL LIKE THIS ISN'T FAIR," and "WE'D ALL LIKE ANOTHER CHAIR TURN. WHY CAN'T I HAVE ONE. IN FACT I'LL HAVE TWO. HOW ABOUT THREE" and okay but is anything about this industry/this show fair, like probs not.

The singing man - whose name, it turns out, is Wolf - was left standing awkwardly on the stage while a producer tried to convince Kelly to take him for her team. But she didn't want to. Because she didn't turn her stupid chair.

Ultimately, the producer decided Guy was allowed to take Wolf into the Battles if he then eliminated an extra person in the next round, and pause.

Every. Inch. Of. This. Drama. Was. Manufactured.

At first, I thought this was an anomaly. A weird night of a CHeaTiN ScANdaL on The Voice when really, I'm here to see people sing, convince myself they're Australia's next superstar, and then watch as they're eliminated for no reason in the Battles.

But then Sunday night happened, and no guys someone is trying to make manufactured drama a thing on The Voice and it's silly.

I need to make this clear:

There is no one more wholesome than Guy Sebastian. He's simply the man who danced to 'Crazy In Love' with an afro in 2003 and brought us the hit that was 'Angels Brought Me Here'. He is not a villain.

Neither is Kelly Rowland. She just wants to dance in her chair, and sometimes become so emotional she no longer has the words.

There is no drama to be had here.

But on Sunday night, the aforementioned producer decided Kelly was going to storm off the set in fury and we're... so confused.

Two contestants from Guy's team - Johnny and Bukhu - were paired up to sing against each other. Guy chose 'Earth Song' by Michael Jackson, but there was a problem.

Bukhu is a Mongolian throat singer who plays the horse fiddle, and that's a surprisingly difficult skill set to fit into pop music on a prime time TV show.

So Guy essentially had Johnny sing the entire song, and Bukhu play his horse fiddle and do his throat singing in the background.

Did the song choice do the best job of showcasing Bukhu's skills? No

Is there a way to choose a Mongolian song that incorporates the horse fiddle that also suits a mainstream singer? Also no.

Does this point to a fundamental flaw with the format of this show? Yes, probably.

As soon as Johnny and Bukhu finished their performance, Delta started to criticise Guy's choice to use Bukhu as back up rather than give him an opportunity to shine.

"Right now we are in a battle and it is about giving a song that is fair to both artists," Kelly added. "That's it."

Guy, whose new role appears to be solely about starting sh*t, then said he didn't choose Bukhu for his vocals. On a singing show. Called The Voice.

"So just so I'm clear, you guys turned around for Bukhu for his vocals? Let's be real," he said.

What ensued was several awkward moments of grown adults talking over the top of each other and getting annoyed about not being able to speak.

"I'm not saying that we are not to break the rules. I'm just saying we can't be picky [when we do and don't]," Kelly said, before suddenly announcing: "I just feel like this is becoming redundant and I'm not going to do this," and storming off the set.

"Cause a walk-off does heaps. What are you going to do? What's a walk-off going to do? That's so disrespectful," Guy muttered and WHAT IS THE DRAMA RIGHT NOW LIKE BUKHU IS FINE. 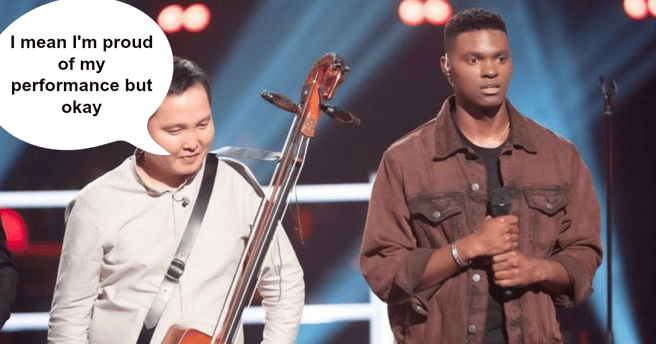 'I thought my fiddle was pretty good.' Image: Channel 9.

What's most bizarre is that The Voice is meant to be a talent show - an opportunity for previously unknown people to make a name for themselves, and ultimately enter the music industry.

But that isn't what's... happening. Instead, there's some background singing while Very Famous People yell and argue and storm out.

The drama is completely and utterly manufactured, and frankly, it's not what any of us are here for.

Reply
Upvote
As much as I love to see Australian talent having an opportunity to show there talents,the voice has for far too long been a show that needs to sell a sad story,and makes the show more about the judges,what they have to say ....rather than showing a more realistic insight into what a real talent show would be like,where judges are just that,judges and coaches,not mentors or friends...so hard to watch at times because of the predictability
C
caz gibson 2 years ago

Reply
Upvote
1 upvotes
Of course it's manufactured drama and I'm not a fan of that,   just as I was never a fan of that woman screeching at poor exhausted obese  people on "The Greatest Loser" or the more recent sanctimonious accusations of "bad behavior" on "Married at First Sight".
I'm interested in the weight-loss journey of some people.
I'm interested in the "social experiment" part of a show about alleged married people.
I'm not interested in cheap attempts to elevate the profiles of judges and "keeping it lively" at the expense of talented, vulnerable artists.
Just show us the talent and it's growth under some expert guidance, competent  musical support   and those  studio production-values with all the smoke & pretty lights.
And BTW - WHY was brilliant contestant XY Latu dropped ?
Will he be brought back ?
Will he win ?
I guess that's why I'll keep watching..........lol..
News
General
Opinion
True Crime
Politics
Sport
Explainer
Entertainment
Celebrity
Reality TV
Movies
TV
Books
Rogue
Royal
Lifestyle
Beauty
Fashion
Weddings
Home
Wellness
Health
Fitness
Travel
Food
Parents
Before The Bump
Pregnancy
Baby
Kids
Teens
School
Parent Opinion
Work & Money
Money
Finance
Career
Lady Startup
Relationships
Sex
Dating
Separation
Friendship
Family
Real Life
Couples