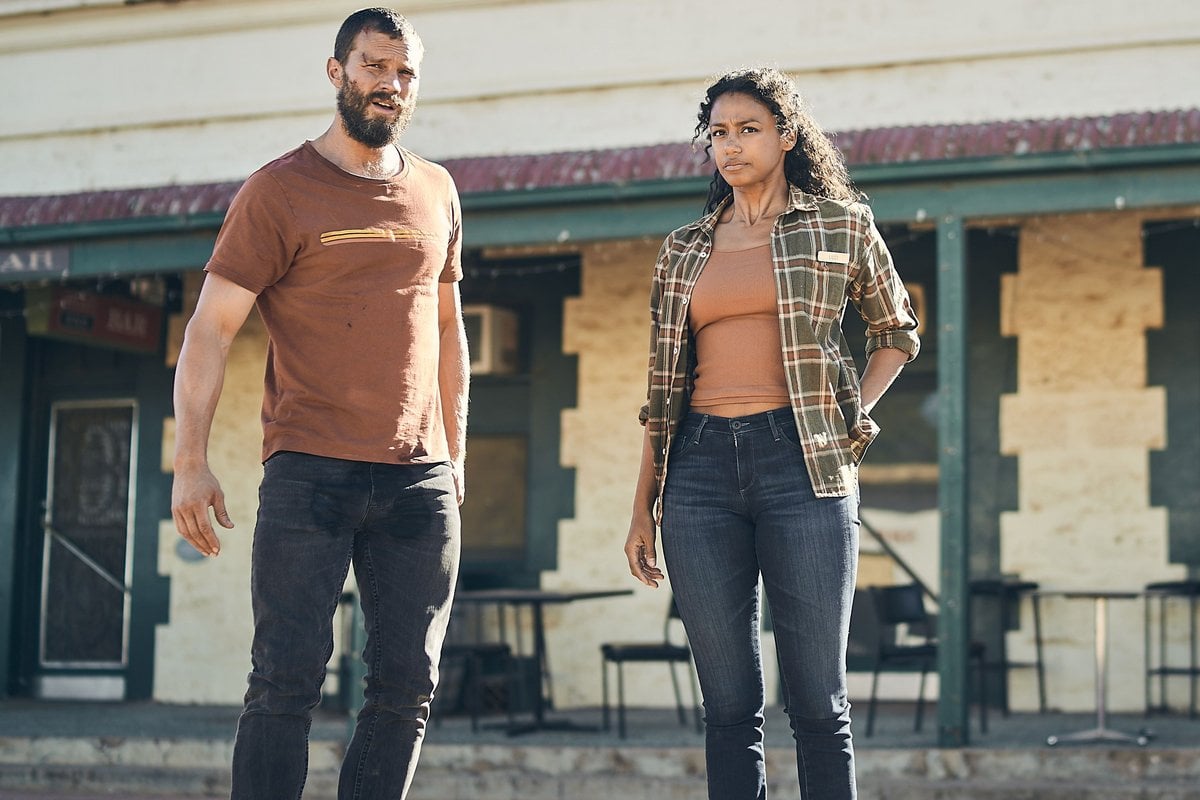 The Stan Original Series The Tourist drops the audience directly into the action, kick-starting a story packed with unsolved mysteries and more than a few plot twists.

The series kicks off right in the middle of the Australian outback, outside a nearly deserted petrol station, where it feels like danger could be lurking just around the corner.

This is the first moment where we lay eyes upon the show's lead character, known for the majority of the series simply as 'The Man''.

The Man is played by Jamie Dornan, known for his roles in the BBC crime drama The Fall, Kenneth Branagh’s drama Belfast, and movies such as Robin Hood.

And yes, of course, as Christian Grey in the Fifty Shades film trilogy.

The Man fuels up his car and then pulls away from the station, only to realise he is not alone and a large tank truck quickly bears down upon him. He cannot see who is driving it but it quickly becomes clear that the truck has no intention of letting him go.

What follows is a high-speed cat-and-mouse chase, and The Man is left to dodge the truck that is aggressively trying to drive him off the road before he ends up tumbling down a ridge.

Later, The Man wakes up in a local hospital, hurt but surprisingly still mobile and alive. The only issue is that he has no idea who he is and what he's doing here, but it rapidly becomes clear that an unknown group of dangerous people are keen to hunt him down.

Leaving The Man both on the run for his life and in search of answers to who he really is.

Take a look at the trailer for the Stan Original Series The Tourist.

The Tourist is very much a character-driven action mystery, and it's the supporting cast that really gives this series an added layer of dramatic flair and heart.

In the last few years in particular, Danielle Macdonald has become an on-screen favourite among critics and fans alike, thanks to the memorable TV and film roles she has taken on.

Her breakout role was Patti in the critically acclaimed film Patti Cake$, followed by the film Dumplin, where she played the title role opposite Jennifer Aniston.

She then won audience hearts, and caused us to shed a few tears, as the sweet Olympia in the hit film Bird Box, while also marking her mark on the Australian film scene by playing the iconic role of Lillian Roxon in the Stan Original Film I Am Woman, which premiered at the Toronto Film Festival in 2019.

"I play a police officer called Helen Chambers and when the audience first see her it's basically her first day, she's very new to all this but eager to do the right thing," Danielle told Mamamia from the set of The Tourist while filming this year.

"I did look into police training, what they carry and what they do and things like that, as preparation for the role, but actually I think it's helpful to the character that I'm not completely across it all.

"She's meant to be learning and so am I." 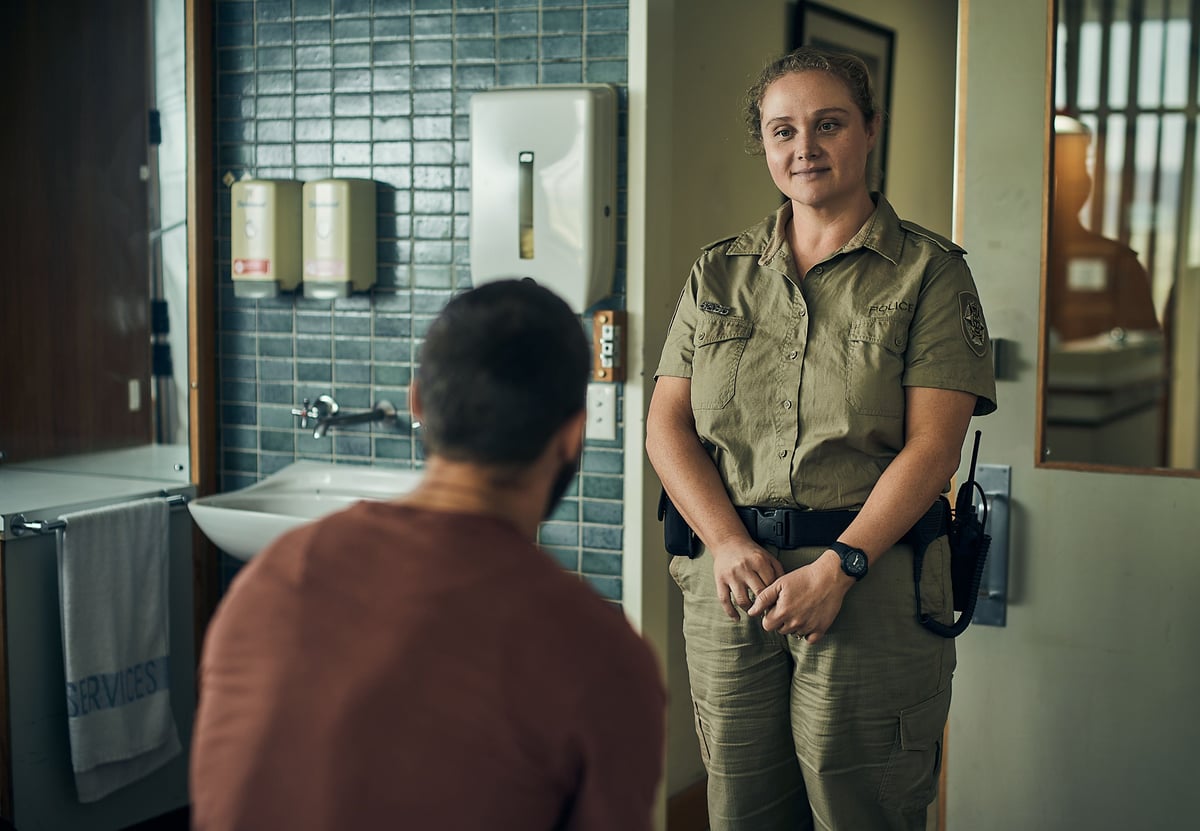 Danielle explained that her Probationary Constable character is sent to check on The Man because he's a real puzzle to the local police force, a stranger in their close-knit community who has appeared with no clue to his real identity.

"Helen has a good heart, and she wants to help this person, so she offers to help figure out his real identity and that's how she gets pulled into this big crazy mystery. There are lots of surprises in this story, when I first read the script I was immediately pulled into the world."

While Danielle said she was thrilled to be back in Australia and working alongside a local cast and crew, she also said that filming in remote areas of South Australia had been difficult at times, which fits in with the idea of the characters in the series battling the elements of the Australian outback.

"Can you hear that wind out there?" she said mid-interview, referencing the wild weather that was literally causing her on-set trailer to shake. "We've been battling a lot of different things while filming, these strong winds, dust storms, and some extreme heat, you really feel like you're in it.

"But it's also been the best experience, "she added. "I can't give too much away about my character and the story but I've been a part of some really impressive stunts and scenes and I think people will really be surprised by the ending."

When Shalom Brune-Franklin first read the script for The Tourist, she knew it was a series she had to be part of.

Shalom first made her mark on the Australian entertainment industry by taking on a lead role in the series Doctor, Doctor before heading to the UK to play a role in the Channel 4 series The State.

She has also starred in the series Bad Mothers in Australia and filmed a new lead in the hugely popular series Line Of Duty. 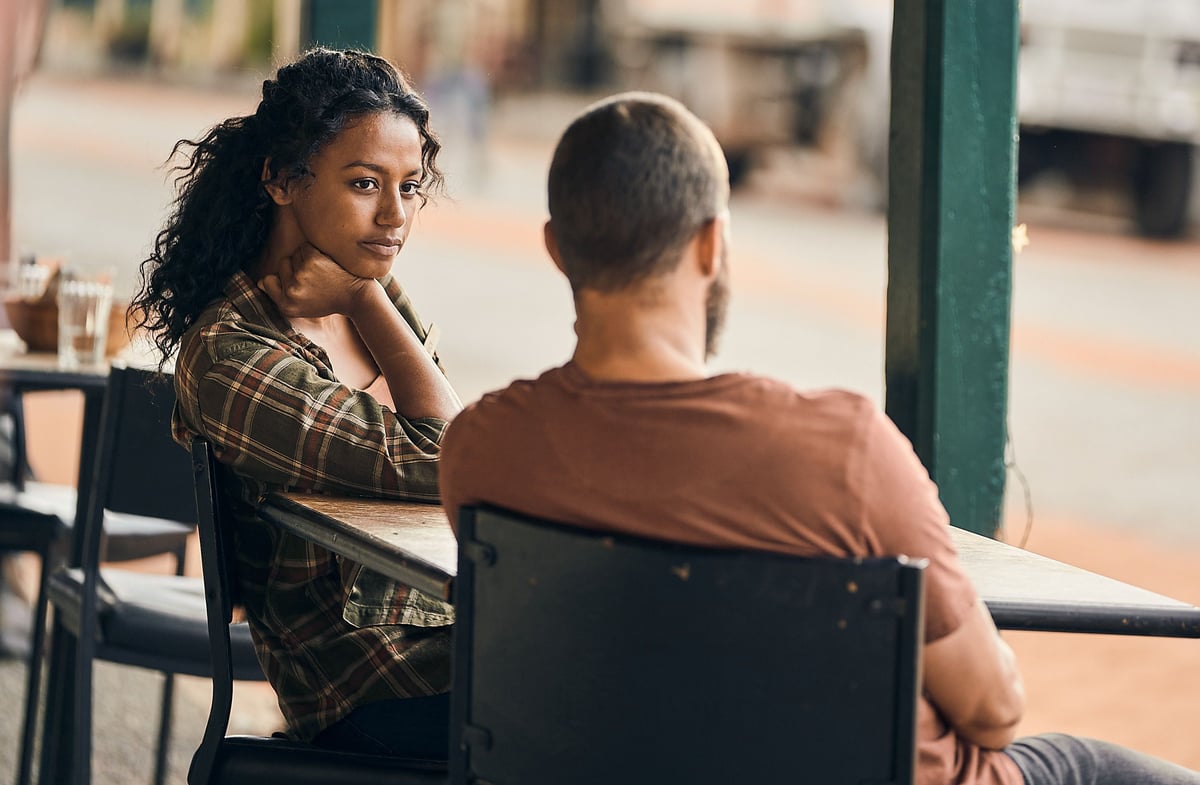 In The Tourist Shalom plays Luci Miller, a character who she says becomes entangled in The Man's quest for this true identity, and a target of the people who are pursuing him.

"Lucie is very drawn to The Man when he comes to town and wants to know his story," she told Mamamia from the set of The Tourist while on a break from filming. "She's working as a waitress in this very small town and all of a sudden there's this mysterious new person in the town, you think that he might be unlike anyone else she's met before.

"Lucie actually ends up part of his story, she starts helping him track down the person who made this mystery call and it's that side of the story I was really drawn to.

"She also has secrets of her own and things that have happened in her past that she wants to keep hidden, which is a side of the character I really liked, it's a big part of her story." she continued.

"I read a lot of scripts in this job and when I first read the script for The Tourist I was really blown away by the premise and the story, I was fascinated by the characters and really pulled into this world. It felt like the kind of show I wanted to watch."

The Tourist takes the audience on a dangerous adventure through the outback of Australia and through to the bright lights of Singapore, in a story that features both big comedic moments and heart-wrenching reveals.

All culminating in an ending you will never see coming.

The Stan Original Series The Tourist premieres 2 January, only on Stan.