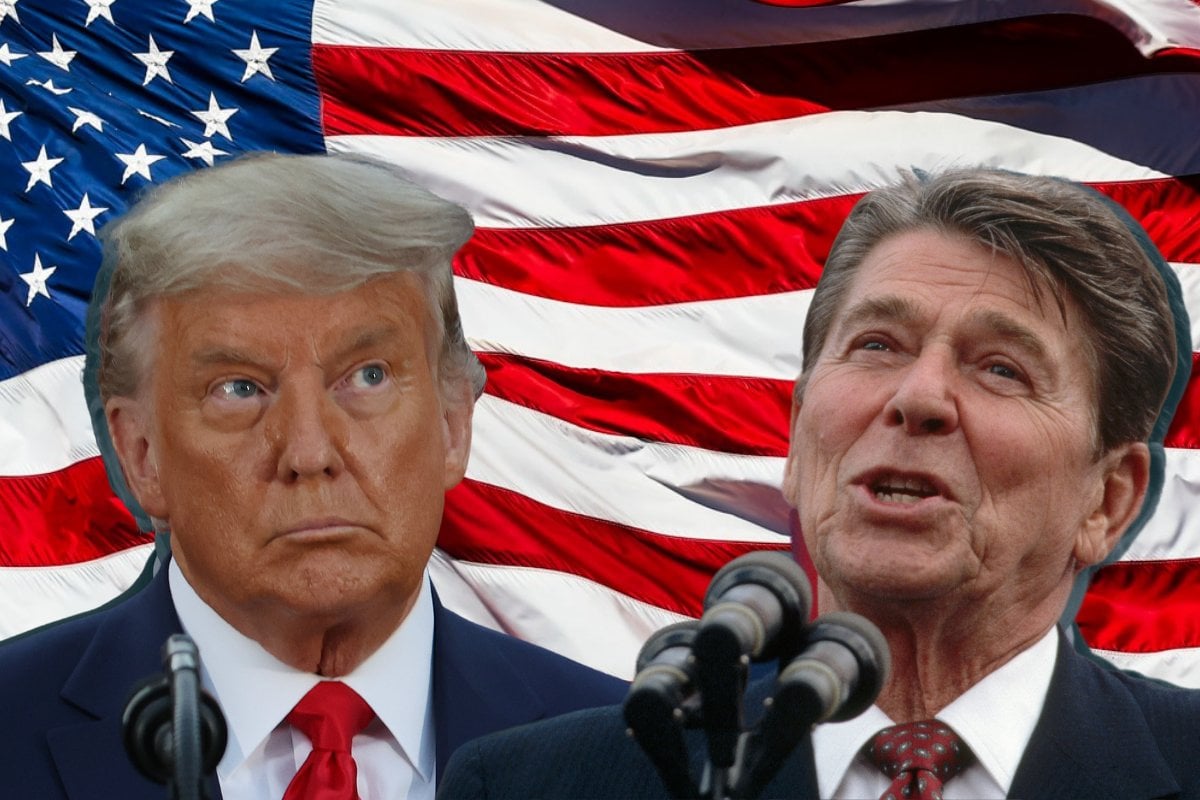 Long before the red MAGA hats of today, donned by supporters of United States President Donald Trump, there were badges.

"Let's make America great again," they read. Alongside was 'Reagan 1980' or a portrait of the Republican presidential candidate of the day.

Watch: The trailer for The Reagans, available on Stan. Post continues below video.

Ronald Reagan, a former Hollywood actor and the 33rd governor of California, won the election in a landslide, unseating incumbent President Jimmy Carter, in a win many had not considered possible. Four years later, he won reelection in one of the country's most lopsided victories of all time.

Throughout his presidency, Reagan was popular. He left office with a 68 per cent approval rating - matching Lyndon B. Johnson and later Bill Clinton as the highest ratings for departing presidents in the modern era. 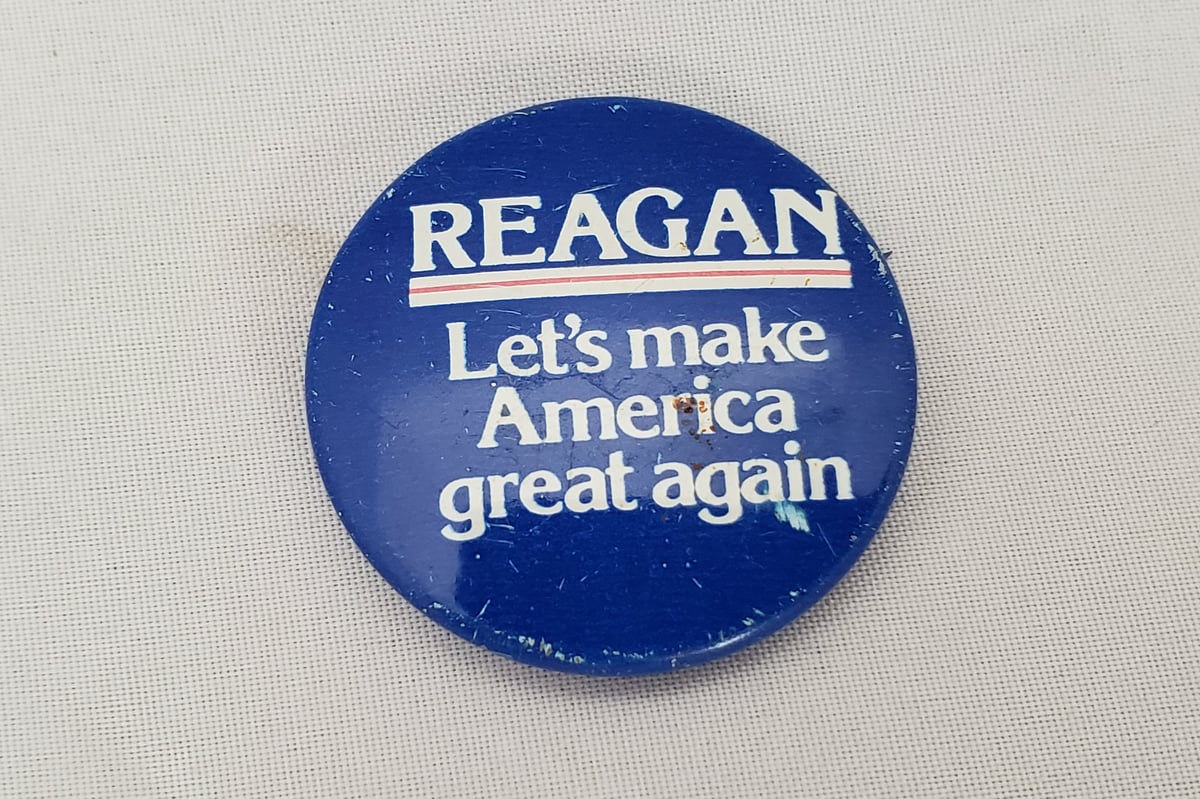 While still a darling of the conservative movement, time has not been kind to the Reagan legacy - which paved the way for the Republican politics of today.

In all of the ways above (except for their wealthy, entertainment backgrounds), Reagan differs from Trump. But when watching Stan's four-part documentary series The Reagans, about Ronald and Nancy Reagan's marriage and rise to power, there's an uncomfortable feeling. A familiar feeling.

There are parallels between the Reagan and Trump administrations at every point, and not just in the MAGA slogan: inflammatory rhetoric and dog whistling in response to racial protests, tax policy favouring corporate interests, wilful ignorance in the face of a deadly public health crisis and plenty of tell-all memoirs from employee-turned-enemies.

In episode one of The Reagans, we see how Reagan moved from Hollywood B-lister to the highest office. Reagan used effective public relations and created myths about himself to project a certain image. He spoke of his athletic prowess, mostly backed up by playing footballer George Gipp in a film.

Another myth was around his World War II military service - though he spent the war in California making propaganda films as he was too near-sighted for combat.

It is reminiscent of the myths created by a certain businessman-turned-president, who has strongly inflated his reported wealth and the successes of his business dealings.

In episode two, director Matt Tyrnauer examines Reagan's record on race. The President often used dog whistles, like "jungle roads", "welfare queens", "states' rights" and "forced busing" (the process of transporting students to schools within or outside their local school districts to try to diversify the student body).

"I believe in states' rights," Reagan told a crowd a 1980 county fair. The endorsement of "states' rights" was the same phrase white Southerners used to justify Jim Crow segregation laws. 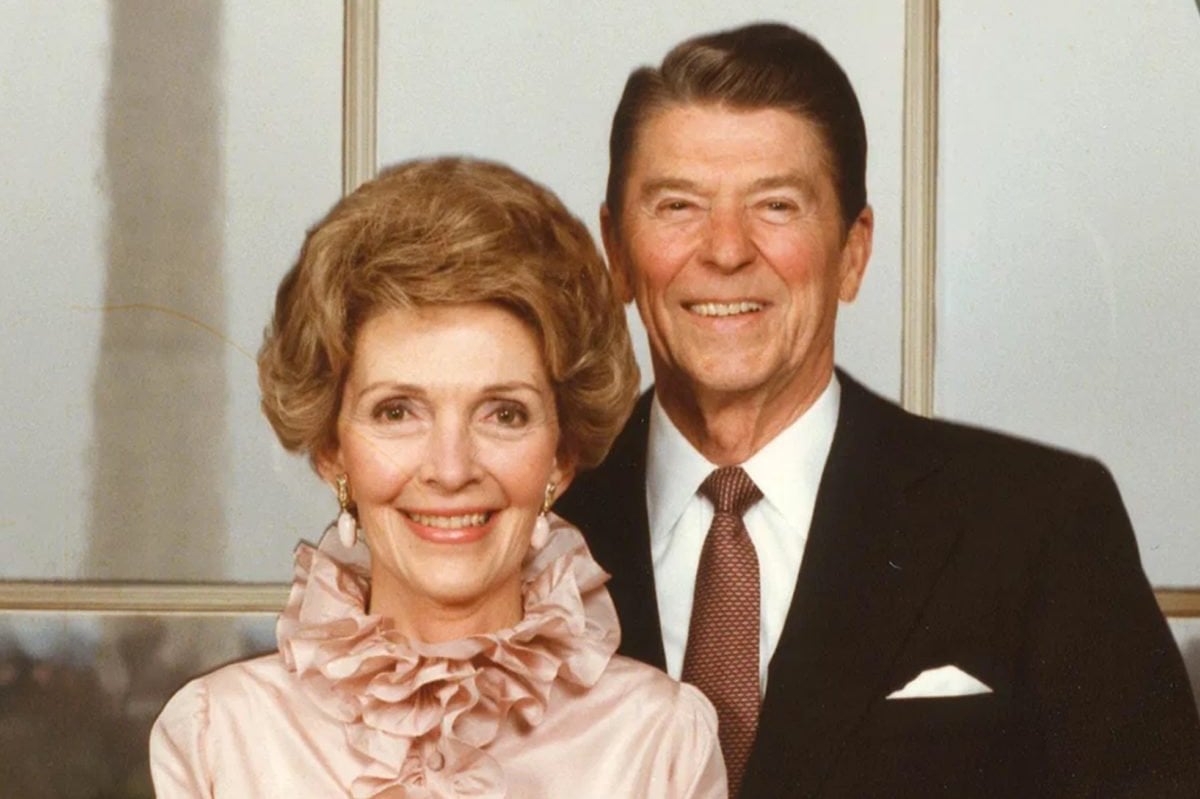 During his 1984 reelection campaign, Reagan told a Philadelphia crowd "the South shall rise again".

In 1980, the Knights of the Ku Klux Klan endorsed Reagan. Its newspaper editorialised that "the Republican platform reads as if it were written by a Klansman".

After more than two weeks of no comment, Reagan rejected the endorsement, saying: "I have no tolerance with what the Klan represents, and I want nothing to do with it".

But ultimately, The Reagans highlights how Reagan stoked the fears and prejudices of white Americans to get elected - first as California governor and later president. 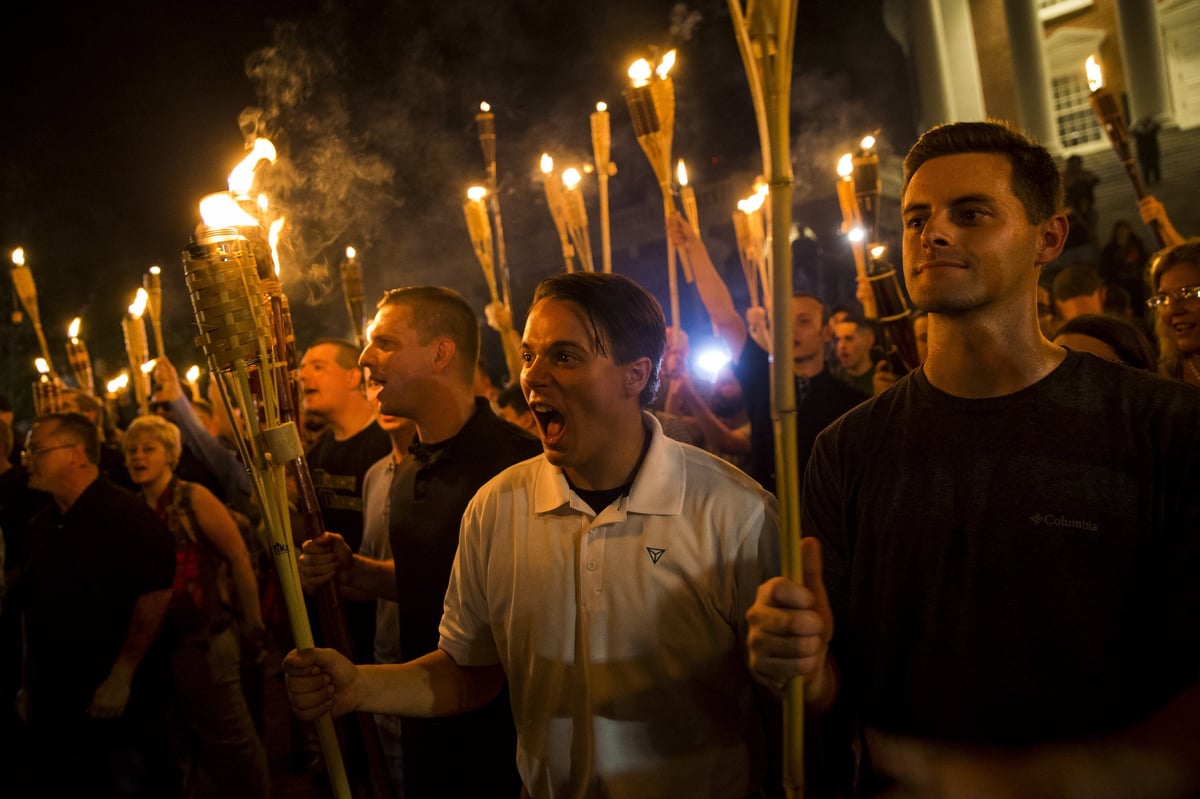 Alt-right, and white supremacists encircle and chant at counter protestors after marching through the University of Virginia campus with torches in Charlottesville, Virginia in 2017. Image: Getty.

In both 2016 and 2020, David Duke, the former grand wizard of the white supremacist group, voiced his support for Trump.

Trump has disavowed these endorsements, telling MSNBC's Morning Joe and ABC's Good Morning America in 2016 Duke was a "bad person who I disavowed on numerous occasions over the years," according to PolitiFact.

However, Trump's relationship with other white nationalist and supremacist groups have gained headlines; most notably when he said there were "very fine people" on both sides of a rally organised by white supremacists and white nationalists, and when he did not explicitly denounce the Proud Boys during the first 2020 presidential debate.

His response, for the group to "stand back and stand by" was slammed as a dog whistle.

By the early 80s, the HIV/AIDS epidemic had become a major health crisis within the United States, disproportionately impacting gay men, and especially gay men of colour.

The Reagan administration dragged its feet in dealing with the crisis, with many historians and activists claiming homophobia as the reason. 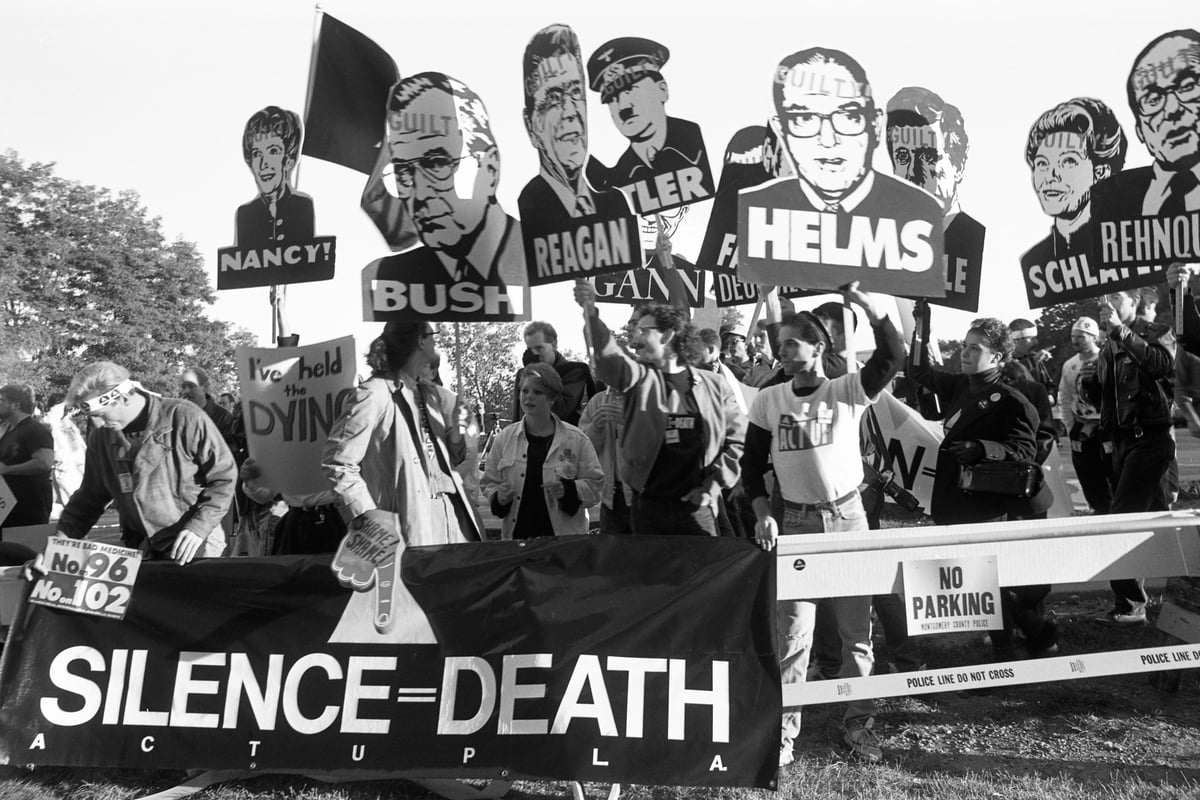 In 1982, Reagan press secretary Larry Speakes laughed when asked about whether the president was tracking the spread of AIDS.

"It's known as gay plague," a journalist said, as reported by NBC News.

"I don't have it, do you?" Speakes responded, as the room erupted in laughter. "Do you? You didn't answer my question."

The journalist said he did not have it, to which Speakes replied: "How do you know?"

In 1984, Health and Human Services Secretary Margaret Heckler announced the discovery of the virus that caused AIDS and the development of an AIDS test.

Even so, the president would not even utter the word 'AIDS' until a year later. By this point, more than 12,000 Americans had died from the virus. Infections had reached hemophiliac populations and injection drug users too.

With inaction from the government, activist groups and charities were left to raise money for research and education into the virus.

In 2020, Trump has been accused of inaction over a different type of virus: COVID-19. 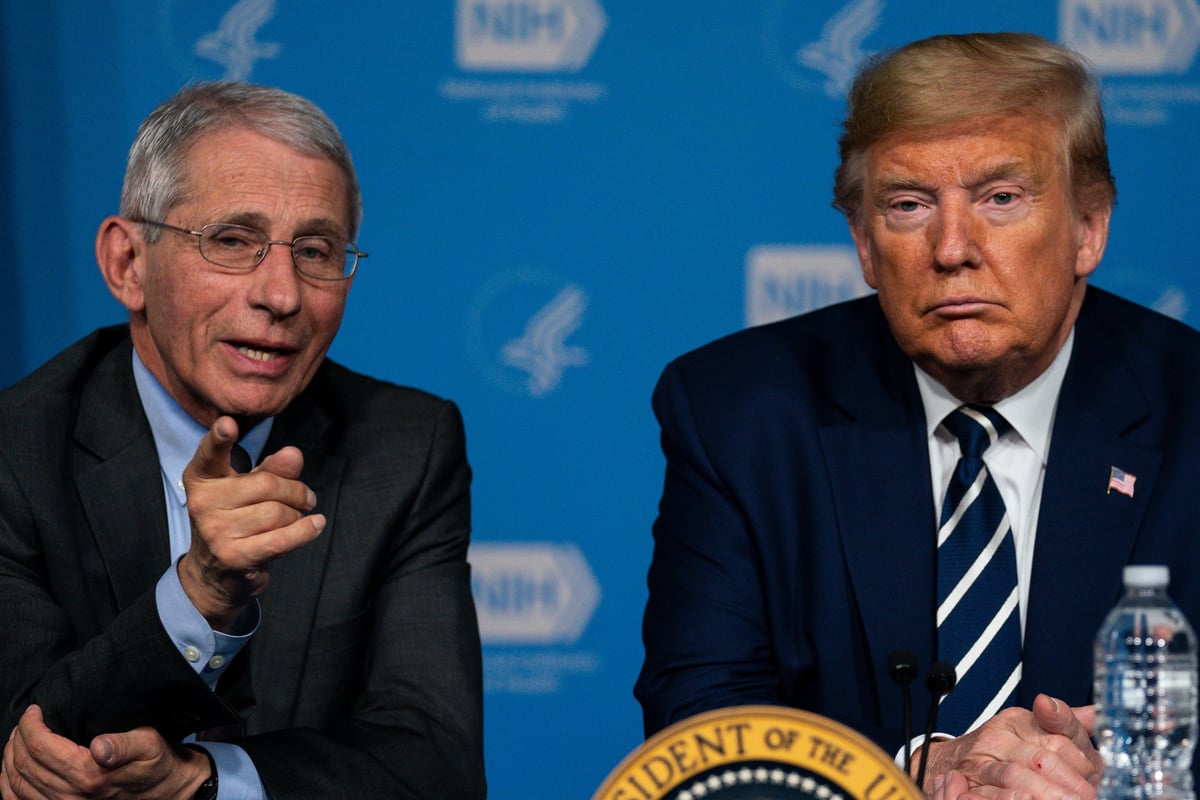 At the time of writing, the United States had recorded more than 11.8 million cases of the coronavirus and recorded 250,000 deaths - far more than any other nation.

Trump has been criticised for inaction, for denying science and playing down the seriousness of COVID.

The President once incorrectly asserted the virus would be 'gone by Easter', suggested it could be treated by injecting bleach and turned the wearing of masks into a political statement.

In September, author Bob Woodward - one half of the journalist team who uncovered the Watergate scandal that took down former president Richard Nixon - released tapes from an interview he had conducted with Trump.

"I wanted to always play [COVID-19] down," he told Woodward. "I still like playing it down, because I don't like to create a panic."

The Reagans ends its coverage after four episodes in 1989, the final year of Reagan's presidency. The series doesn't ever explicitly draw a line to Trump, or even name him at all, but the unspoken parallels are impossible to ignore.

It contextualises the Reagan era, making it very clear how American got to where it is now.

Reagan was diagnosed with Alzheimer's disease in 1994 and spent much of his final years in semi-isolation. He died in 2004, but the legacy of Reagan presidency lives on - in another very divisive entertainer.

Episode one of The Reagans is available on Stan, with new episodes available 2pm on Sundays.

S
salemsaberhagen a year ago

Reply
Upvote
2 upvotes
If anyone has seen the movie And The Band Played On it outlined how the CDC had it's funding cut, and one politician even said with this administration, you'll never get approval for anything with the word gay on it, when talking about money for research into AIDS.  They increased the Defence budget though, they weren't even at war or at threat at the time.  The lack of funding into health and AIDS research meant that many, MANY people died.  Hemophiliacs, drug users, children.  Not just gay men.  The movie shows how out of touch and loathing toward gays Reagan was; he was simply horrid.  A truly despicable man.  He and his administration believed it was *just* a gay disease, so why should they care?  Good riddance was their belief, they thought the virus would rid them of 'the gays' so of course didn't want to stop it.  It was 'God's punishment'.  Unfortunately, a lot of children and elderly people died from it, not just 'the gays'.  All while he took money from the Health portfolio to increase Defence outside of war time.  Absolutely disgusting, cruel, and backward priorities.  ATBPO truly made me despise and loathe Reagan.  So many innocent people died for no reason.
Z
zaky a year ago