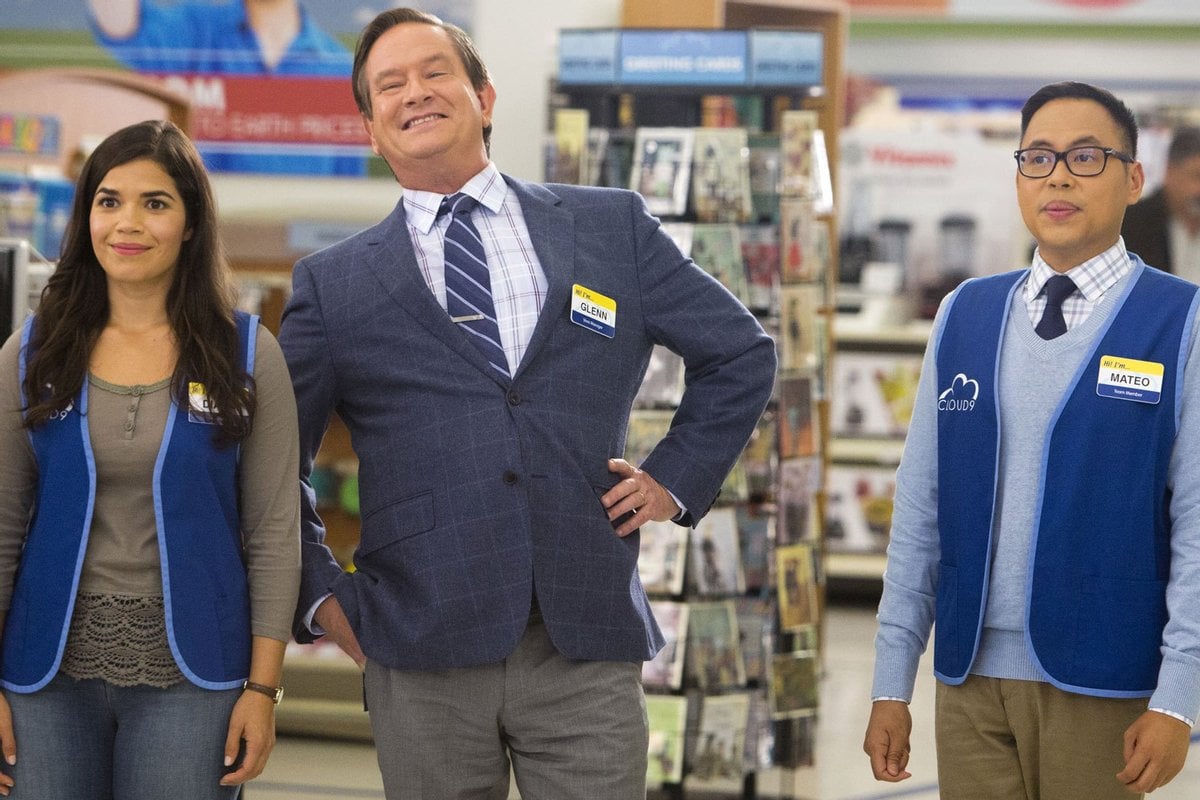 A few months ago, after about six hours of mindlessly scrolling through Netflix, I clicked onto the first episode of Superstore.

My expectations were low. I'd heard it was cheesy. Phrases like "30 Rock but... not" had been thrown around my social circles.

I decided it might make a good background TV series, the kind of show I could chuck on while I furiously scrolled through my phone.

WATCH: The trailer for the very first season of Superstore. Post continues below.

I soon realised I'd stumbled onto a sitcom unicorn.

Because the thing is, a well-crafted sitcom is about as rare as a four-leaf clover.

Creating a successful sitcom is no easy feat. You need to design a world that's familiar enough to the audience, they'll feel immediately at home in it. But fresh enough that it'll feel like an escape from their daily lives.

This is exactly what Superstore has achieved.

The sitcom which first aired in the US in 2015, is set in a 'superstore' called Cloud 9. A 'superstore' is basically what you'd get if you combined Woolworths and Kmart into a giant one-stop-shop.

So a personal nightmare for most people, but a comedy minefield for a TV writer's room.

The characters in the sitcom are the people who work at the store. They're people we've all met before. There's the conservative, yet loveable, store manager Glenn (Mark McKinney). Glenn believes America is the best country in the world and trips over himself trying to say the right thing when he realises one of his employees is gay.

There's Amy (America Ferrera), the floor manager. She's a young mum whose college and career dreams were thrown off course when she fell pregnant just after high school. There's Jonah (Ben Feldman), a business school dropout who finally finds a home in a low-paying retail job. Amy and Jonah have a will they/won't they thing going on throughout the series which is equal parts endearing and annoying.

But the real MVPs of Superstore are the supporting characters. There's Garrett (Colton Dunn) who spends his days at Cloud 9 making sarcastic announcements over the PA system. There's Dina (Lauren Ash), the assistant manager who has no time for bulls**t but plenty of time for her pet birds. Garrett and Dina also have a will they/won't they thing going on which is 100 per cent endearing.

There's Mateo (Nico Santos) who emigrated to the US with his Filipino parents when he was just a kid. He clearly remembers going to the 'green card store' with them and only realises as an adult that he's actually an illegal alien.

There's Mateo's best mate Cheyenne (Nichole Sakura), a teen mum who has a heart of gold under her ditzy facade.

There's Sandra (Kaliko Kauahi) who is locked in an ongoing feud with Carol (Irene White).

It's these characters and their storylines that make Superstore the defining sitcom of this era.

LISTEN: Stan's original series Bump will make you fall in love with Aussie TV all over again. Post continues below.

None of them have massive character arcs. In fact, most of them are in the exact same place at the end of the series as they were at the start of the series. They don't make leaps and bounds. They'll never be rich. They'll probably always work for minimum wage. They'll probably always live in St Louis, Missouri. But over the six-season series they go through some pretty serious s**t together and grow as people.

Lifelong friendships are formed. Surprising romances develop. And everyone is forced to question who they really are and what they really want out of life.

Superstore is the kind of TV series that sneaks up on you.

What starts as an easy background watch, quickly turns into an engrossing binge watch. After a while you'll look up and realise you're heavily invested in Garrett and Dina's relationship and in finding out why severed feet keep turning up at the store.

I personally would like to thank Superstore for making a year that feels like an extended Groundhog Day just a little bit brighter.

And if you're looking for somewhere to escape to for a little while - may I suggest a little superstore in St Louis, Missouri.

You can watch the first five seasons of Superstore on Netflix and the sixth season on Foxtel and Binge.

Reply
Upvote
I did shed a tear watching the last episode, was a great little fun sitcom