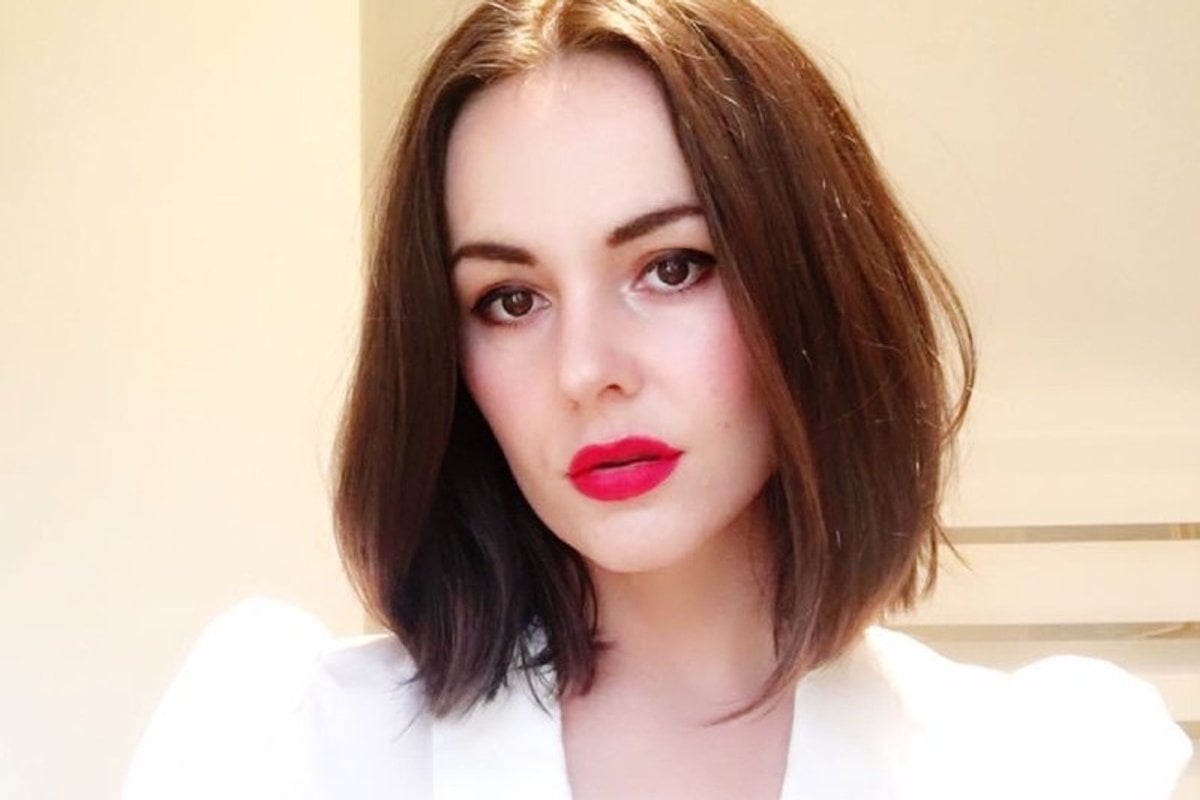 I was eight years old the first time I saw my brother using heroin.

My mum had gone to the supermarket and though the house was quiet, the energy of what I had known to be a quiet house had shifted.

Months before, if my mum went out, I would sit quietly, comfortably reading a book or playing with our dogs, but since my brother’s partner had left him and he had moved back in with us, a quiet house became uncomfortable.

Shadows on the walls, which I wouldn’t have noticed before became cold and haunted places, reflecting just what I was feeling inside. I quickly went from being a happy tomboy to living in a constant state of hyperawareness and anxiety. Sitting in my room, listening to every sound.

I turned 33 this year and I still deal with post-traumatic stress disorder and obsessive-compulsive disorder daily.

I really wish I knew if I would have been any different had it not been for the dysfunctional domestic situation that I grew up in. Had it not been for a childhood that was ripped from my hands and replaced with existing quietly to not upset my brother who, depending on where he was at with his addiction, could lash out.

It wasn’t once where he threw everything off the counter past my mum at the kitchen wall.

My brother was a troubled child.

He had, what my grandmother referred to as a restless spirit. My mum often described him as always needed something to do.

At 12 years old, he was already venturing out late at night and became involved with some teenagers that no parent would look on favourably.

Mum followed him to his mate’s house once when he was that age and peeked through the window to see them all sitting around in a circle passing around a bong.

It’s been largely disputed that marijuana is a gateway drug and I, myself, don’t completely believe that it always is, but in my brother's case, I wholeheartedly believe his appetite for drugs grew starting with marijuana.

And with each new discovery, his appetite only got bigger.

That’s just it with drugs, isn’t it? Some people try them once and never again, some use them recreationally and a few become addicts.

Listen to this episode of No Filter, which discusses living with OCD. Post continues after podcast.

The afternoon I saw my brother sitting on the edge of the bed, limp, with his head dropped and a syringe sticking out of his arm, was all I needed to see to steer me away from taking drugs.

But the next 20 years drew a nail in the coffin of any potential forays with illicit substances. The sheer exhaustion I felt from dealing with the repercussions of my brother's addiction had me believing my life had no meaning.

By 20, though I was a diligent university student, had taken out a mortgage on my own apartment, worked two jobs and had a wonderful social circle, I was completely and utterly depressed.

From the outside I had everything a 20-year-old woman would want. I was independent, I was studying to become a writer, and I had a supportive group of mates. But inside I was a mess.

As I sat in the GP’s office, staring at a figure of an anatomical heart, they asked me a series of triggering questions. They were filling out my mental healthcare plan.

I was told that with my issues, Cognitive Behavourial Therapy (CBT) gave me the best chance of recovery. Where the healthcare plan asked ‘is the patient suicidal or had thoughts of suicide?’ my doctor wrote, 'patient says no, but was tearing up when the question was asked'.

I asked my doctor for antidepressants and was prescribed sertraline.

I committed myself to the medication and felt like it was helping, after those initial weeks of adjustment. I can say now, quite confidently that visiting my doctor that day did help.

I booked in to see a psychologist and you know what the first thing we spoke about was? My brother’s drug addiction.

Over months I discovered myself. I faced the trauma.

The oppressive negative thoughts and my various issues stemmed from Post-Traumatic Stress Disorder, which festered into extreme anxiety and depression. To top it all off I had a serious case of body dysmorphia, which was something I truly believed was as a result of negative body imaged portrayed in society and media.

The combination of therapy and antidepressant medication saved my life. Though I did not have thoughts of suicide, I began really hating myself and who knows where that would have taken me. I saved myself just in time.

But through it all I was still dealing with my brother's addiction and everything else that came with it.

Over the next 10 years, my mother would try relentlessly to save my brother from his ongoing addiction and frequent bouts of rage. My other brother had stopped stepping in to help as he was dealing with his own issues which resulted from this situation.

I was living alone in my apartment at a safe physical distance but mentally, more often than not, my thoughts were with my mum.

At least once a week she would call me to tell me she didn’t feel safe because he had trashed the house again or he had shot up what he had told her was heroin (but was starting to sound like methamphetamine and that he was dry reaching or hallucinating).

I knew we had reached a new level of danger when he told her that “they” were watching him from inside the TV and that a black angel had landed on the fence in the backyard.

How she must have felt.

How he must have felt.

I was afraid for them both, constantly.

Drug rehabilitation with the use of counteractive drugs such as Methadone and Naltrexone worked for a while, but he slipped time and time again back into hard drugs.

He tried talking to a counsellor, going cold turkey, rehabilitation and even Ibogaine treatment – which is a naturally occurring substance found in Iboga plants and is sometimes used to counter drug addiction.

Time and time again we watched him slip.

This was incredibly hard for him and my mother. The waves of his addiction rippled through our family, driving us apart and causing us to resent one another more than once.

For years, we dealt with this. It was unrelenting. It was the one thing that was a sure thing. Everything changed, shifted, but we couldn’t go where we wanted to go, we couldn’t grow as individuals because this addiction felt larger than anything else.

It took so much precedence.

In 2018 I was on the way to a holiday house in the country, a much needed break from my demanding role in theatre management, when I received a distressed call from my mother, now 70 years old.

She was crying and told me that once again, my brother had been verbally abusive towards her and had thrown a dog bowl at her before calling her an idiot.

Once again I felt the familiar rage build up inside my stomach. Rage and fear actually, a terrible feeling.

Mum, who always said she wasn’t afraid of him was clearly afraid. I told her to lock the doors, and I had made her promise that if he came back and became violent and abusive – she was to call the police.

At first she wouldn’t agree, but by the end of the call she had agreed that she would call the police. That was Saturday. On Wednesday I answered my phone to hear an unfamiliar voice.

It was a police officer, and they asked if I could come to my mum’s house. I asked why and was told that my brother had spent the last 12 hours of the night and then morning terrorising my mother.

He beat on the walls and called her names. In the morning, she got up and got dressed, took her cat and dog and locked herself in the car.

He continued to smash everything she owned, and she finally put her safety first and rang the police.

It has been a few years now, and we are not in contact with my brother.

That might seem harsh to some but we tried – we all did – for years to help him, to help us as a family but his addiction was too strong.

It was very apparent that our lives were not safe. A volatile personality and hard drugs make a deadly combination.

Though life has slowed down at bit now and I find more joy in my days and even mundane tasks, I still suffer from the mental damage caused by my brother’s addiction.

Each day it gets a little bit better, but memories and fears are hard to erase. Still, I try to remain positive and always try to see the silver lining in every situation, because I had to find that lining growing up and through my early adulthood.

The silver lining I appreciate most now is this– we tried to help him. We left when we couldn’t in order to find our own peace.

I can absolutely be supportive should any of my circle come to me with problems of a drug addiction or an addict in the family.

My appreciation extends all the way to the fact that I know how to set boundaries.

We all need boundaries, not just to survive, but to actually thrive. We can’t carry the burdens of our loved ones forever. It is such a heavy weight.

We can help them, but we must love ourselves enough to protect ourselves from harm and from progressing to become people living to our fullest potential.

Ruth Niemiec is a feminist, writer and communications professional from Victoria.

Reply
Upvote
I really hop ]e you can recover from this. Our neighbours are going through the same thing with their son. Can't recall the number of times he has punched holes in every wall, smashed every window, crashed 2 cars and being taken off by 6 police officers and an ambulance to the hospital, only to be back a few hours later.  The other children (in high school) have locks on their bedroom doors, but how they can manage the hours and hours of terror he puts the family though, I do not know.
M
mamamia-user-482898552 9 months ago

Reply
Upvote
1 upvotes
One under-acknowledged phenomenon of addiction is how the destruction and harm extends beyond the addict and to those who love them. Your natural instinct is to try to protect an addict from themselves, but to do so comes at a personal price. To someone who hasn't experienced it, they probably don't understand how hard it is to recognise you are being pulled under by an addict who you are trying to help. I'm really glad your Mum is OK. It's bloody hard - but you have to save yourself.