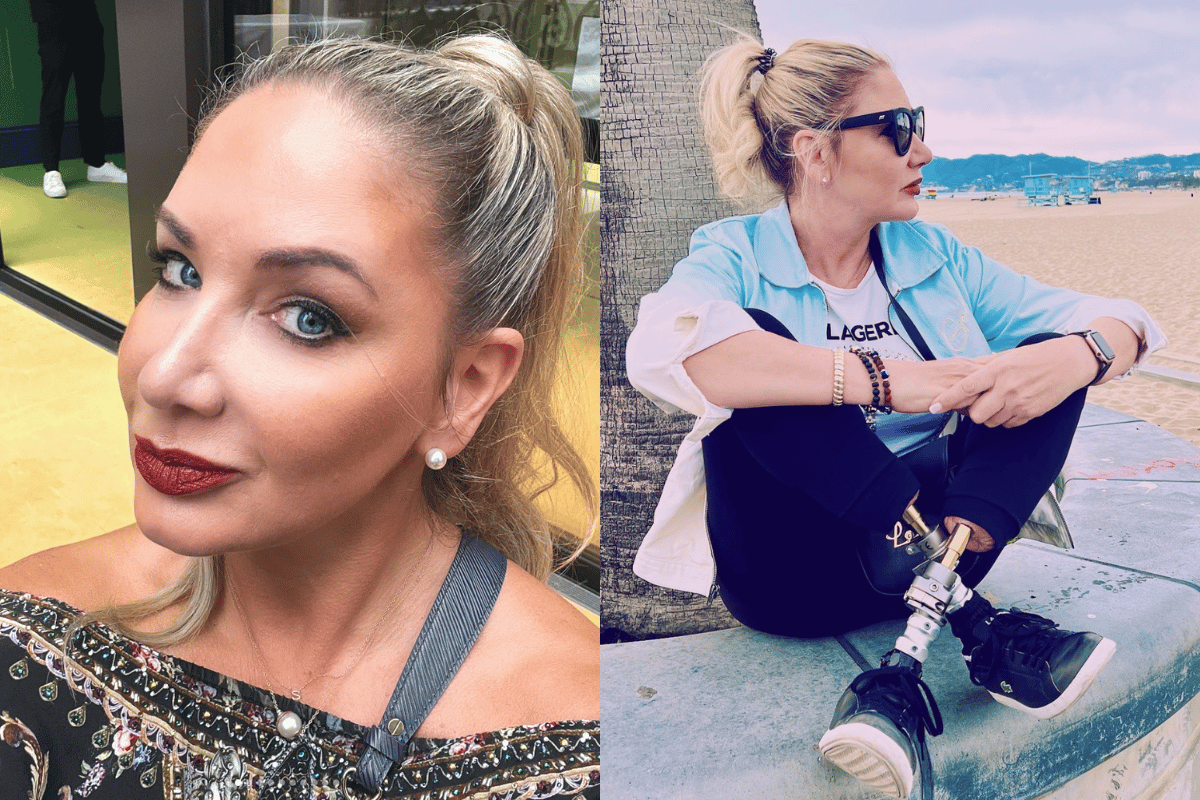 Stephenie Rodriguez has quite the story.

She is a single mother of one and a digital entrepreneur. She has done incredible things for women, inventing a personal safety device WanderSafe, and she is a member of UN Women Australia.

But Stephenie has also faced adversity and hardship. And, she has beaten all the odds, as two years ago she was given a two per cent chance of surviving.

Why you may ask? It all came down to a single mosquito bite.

5 things you need to know about building resilience. Post continues below.

In late 2019, Stephenie's career was skyrocketing. She was off to Nigeria for a work conference and in that same fortnight, Stephenie was set to travel to America as she had just won a four-day girl's weekend raffle which included tickets to a US baseball game with her close friend, Liz.

While in Nigeria, Stephenie was bitten by a mosquito. At the time, she didn't think anything of it.

So after lots of travelling across the globe in those two weeks, Stephenie was understandably feeling extremely tired. She put it down to jet lag.

"I had a bit of congestion, which I figured was a bit of airplane flu. It was pre-COVID times. I also felt feverish, but I had a 'soldier on' attitude," Stephenie shared on Mamamia's No Filter podcast.

So at the end of her American trip, Stephenie and her close friend Liz went to Boston airport ready to come home to Australia.

"The whole day is a bit of a blur. It was like moving through butter, and my close friend was worried - it was out of character."

Stephenie then collapsed on the floor of the airport.

According to Liz, Stephenie began to foam at the mouth and was convulsing. Liz screamed for a doctor and luckily there were two in the airport lounge who came to assist. Stephenie was then evacuated from the airport to the nearest hospital. If Stephenie had gone on the plane, doctors told Stephenie her heart would have exploded when the cabin pressurised.

"It was a sliding doors kind of moment," Stephenie reflected.

Initially, doctors assumed Stephenie was a stroke victim. They then tested for meningococcal. Once they realised Stephenie had travelled to Africa, that's when further theories emerged.

Listen to Stephenie Rodriguez talk with Mia Freedman on No Filter. Post continues after audio.

Liz began to get in touch with Stephenie's family back home, including a business partner who happened to be a doctor as well. As a medical student, the business partner had worked on the Gates Foundation developing the drug that kills malaria once it's in the body. He asked for the physicians working with Stephenie to immediately screen for parasites. That is when Stephenie's condition was finally confirmed.

She had cerebral malaria.

In simple terms, it involves a parasite that attacks the bloodstream that then attacks the brain, resulting in swelling, brain damage, seizures and in many cases, death. Cerebral malaria can also develop incredibly quickly - from the moment Stephenie had been bitten by the mosquito in Africa, to ending up in the emergency hospital, it had been just two weeks.

Given Stephenie's condition, her loved ones were immediately flown to her bedside, including her son Constantine who was only 13 at the time. Stephenie had been given a two per cent chance of survival.

"In this coma I was declining so fast, that in three instances, doctors called my family to let them know I wouldn't live through the night. I do have memories of the coma. It was decided my son would lead the decision-making. While I was in the coma, Constantine was sending voice messages for Liz to play next to my ear. The doctors told me that when they were doing brain scans, they were finding me not responsive except to my son's voice," Stephenie said on No Filter.

After two weeks, Stephenie came out of the coma. But as a result of the cerebral malaria, she then went into septic shock as a secondary problem.

"When I woke up, my right hand and both feet were bandaged. The pain was ridiculous. On my right foot, 70 per cent of it was damaged, and my heels and my toes were black."

Given American healthcare is incredibly expensive, once Stephenie had stabilised, she was then transported back to Australia. It was here that Stephenie's long process of recovery began.

After a year of multiple surgeries, attempts to salvage both feet and Stephenie being in a wheelchair for that entire time, the decision was made that Stephenie would undergo a double amputation.

"Being able-bodied and then becoming 'damaged', it was just about trying to find life on the other side," Stephenie said.

"My goal was always to walk again. And the name of Professor Munjed Al Muderis who I had seen at TEDX Sydney in 2015 popped into my head. I sent him an email, wanting him to give me robotics. Within ten minutes of sending that email, his team called me saying 'see you next week'."

So Stephenie took the leap of faith and put her trust in Professor Al Muderis, who specialises in osseointegration, which involves robotic artificial limbs for amputees.

"I spent eight weeks at Macquarie University with physios helping me to learn how to walk again. And they wanted to make sure the surgery was being accepted into my body, given the infection risks," Stephenie shared on No Filter.

Visually speaking, Stephenie's legs finish just above her ankle and then a thick titanium rod connects her legs to her prosthetic 'feet'. She has two pairs of prosthetic feet courtesy of the NDIS.

Considering Stephenie always saw herself as a "shoe and pedicure" girl - whose 200-plus shoe collection "was enviable" - Stephenie is still able to wear fun sneakers, flats and even heels.

And currently, Stephenie has a french pedicure painted on her prosthetic feet - because why the hell not!

"It has a silicone cover, and when I go to nail salons and they're doing my manicure, I'll get them to paint the prosthetic feet too. Any shoe (except stiletto heels) will fit onto the feet too," Stephenie noted.

Just to have a small slice of normalcy meant the world to Stephenie.

"It was overwhelming because one of my goals was to resume as much as my normal life as possible. It changed the way I see my feet now."

Stephenie has even learnt to dance with her new feet, even recently posting a video of her and Constantine dancing together on her TikTok, which has over 2.6 million views.

So what does life look like today for Stephenie, just over two years since she was first bitten by that mosquito?

Although it has changed dramatically, there's an undeniable level of resilience and determination that Stephenie has discovered since.

"Life is different but not any less enjoyable. I've had to learn to do things differently. It was a real paradigm shift for me. I was so busy saving other people with WanderSafe, that I did a very poor job of self care. And it showed up in other quadrants of my life, like my relationships, my health. I had to get real with my internal dialogue and become my own best friend, to mentally prepare for the biggest exercise of my life. Now just to be on the other side of recovery, even with good days and bad days, I just have to allow myself to breathe and cherish the 'temple'."

Stephenie continued: "Yes, I am permanently augmented and look different, but it's given me a new set of opportunities and I'm able to help more people through my experience - I call it my collateral beauty. Finding and seeing good where we often only see the bad."

You can read a chapter from Stephenie's upcoming book Thank You, Mrs Carter here.

And you can read more about her revolutionary personal safety device for women here.