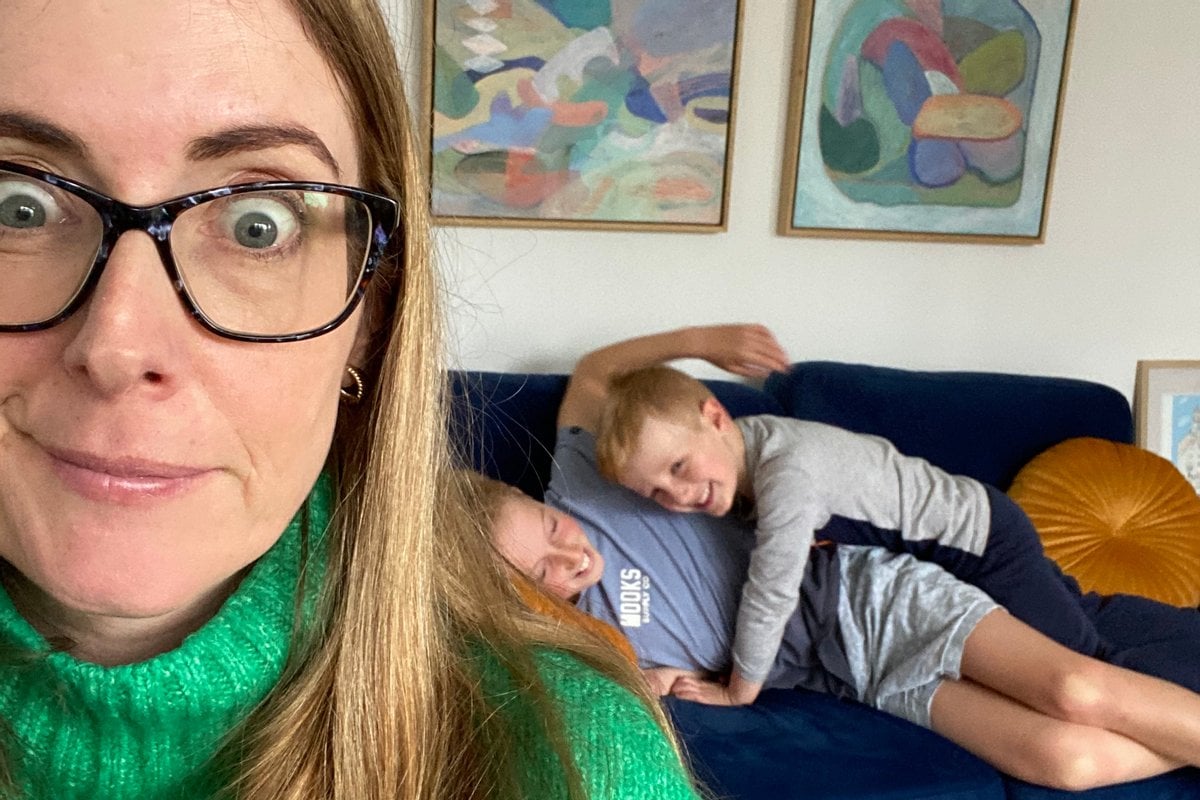 As anyone with kids knows, parenting can be the most wonderful thing one minute and the absolute worst the next.

The phases come and go, but right now, the absolute worst part of parenting for me is breaking up the fights between my two boys.

I hear myself saying things like, "Do NOT throw that shoe!", "If I hear that one more time it's straight to bed!" or my personal favourite, "Do not even look at your brother!" and I wonder - who even am I?

These fights or disagreements occur daily over 'who touched who' or 'who is better at ping-pong' and they are very loud, and sometimes physical.

Their ability to fight over almost anything is quite the skill, but it is also very boring to manage.

Watch: The things people say before they have kids. Post continues below.

I grew up as one of two girls and our sisterly relationship has always been good. We liked each other's company, and while we had our moments of competition and jealousy, we never resorted to shouting matches or punch ups. I have only recently realised just how lucky my parents were to have two perfect angels. *insert eye roll from my mum here*

On the other hand, my husband was one of five kids and he often scoffs when I tell him about our peaceful family home in the 1980s. He has stories that involve multiple backyard/back-seat-of-the-car fights and one infamous tale that involves a younger brother lobbing his tennis racquet at another brother with pure rage.

My boys are age 11 and five and they are beautiful humans who I love and adore. They even seem to love each other and it melts my heart when one says something kind to the other.

The acts of kindness happen occasionally, but the fighting, brawling and ongoing disagreements about absolutely nothing happen often.

In fact, it is happening right outside my window now (sorry neighbours) over a backyard cricket score-keeping dispute. I am breathing deeply until it is time to intervene.

It wasn't always this way in our household.

Our eldest was an 'only child' until he was six and with such a big age gap between him and his brother, I smugly believed we would escape the sibling scraps that family and friends would tell me about over a wine.

Little did I know what was coming for me.

Listen: 'My Toddler may as well be my boss' on This Glorious Mess podcast. Post continues below.

When the youngest was still an infant, things were mostly quiet between the pair of them. But as he found his voice and wanted to play with his big brother, their true relationship and the scrapping began.

At first, we only needed to put out the odd fire when our toddler decided he wanted to play with the 'big boy' toys.

Then they levelled up to snatching things or telling tales, then finally to wrestling and physical brawls with a side order of screaming. Thankfully, no one has lobbed a tennis racquet at anyone's head, but there's still time.

From the outside looking in, especially for anyone who is lucky enough to be raising quiet kids who prefer craft to competitive backyard cricket, the big fights ending with tantrums probably look (and sound) awful.

And, yes, I can confirm that they are.

But it's the low level whingeing and hyper-competition between them that gets me the most. Their daily demands of 'muuuuuuuuuum!' before describing to me IN DETAIL the latest infringement of who did what. Just now it was, "But he kicked me in the funny bone!"

It can be amusing, but when it kicks off while I am working, or trying to get dinner ready, or trying to talk to my husband, it is infuriating.

Also, I simply don't and can't care every single time, even though I know sometimes they just want to be heard.

According to the experts at The Raising Children Network, the best thing you can do during a sibling fight is to keep cool and intervene before it goes nuclear. Then make a time to talk when everyone is calm.

This is essentially what happens in our house... most of the time.

Sometimes I'll let the boys work through a fight themselves and when it appears to not be heading in a positive direction, I'll physically have to separate them until they cool off. It usually means we all go to our bedrooms for a five-minute breather. Once calm, we talk about who did what to who and whether that was a good idea. It likely wasn't.

Another great tip is to 'apply consequences fairly' while keeping in mind that what's fair for the youngest might not be fair for the oldest. I have to be careful not to always ask my eldest to acquiesce to my youngest's demands, just to keep the peace. The little one can be loud and sometimes I just want the noise to stop, but without always unfairly punishing my eldest.

Consequences for both of them mostly relate to reduced screen-time on the weekend or time alone in their rooms and currently this works well enough, although it clearly doesn't prevent any new fights from kicking off.

As a busy parent, it's hard to always have the patience to always remain cool when your kids are being unreasonable - I certainly do not. But it is good to remember that sibling fights are normal and as long as no one is seriously hurt, it can be a learning experience on how to problem solve.

And even if it isn't a learning experience every time, it might be a tiny bit funny - as long as no one throws a tennis racquet at anyone else's head.

For more tips on managing sibling fights at every age, visit the Raising Children Network website for helpful tips.

Do your kids fight? Tell us more in the comments below.

Laura Jackel is Mamamia's Family Writer. For links to her articles and to see photos of her outfits and kids, follow her on Instagram and  TikTok.