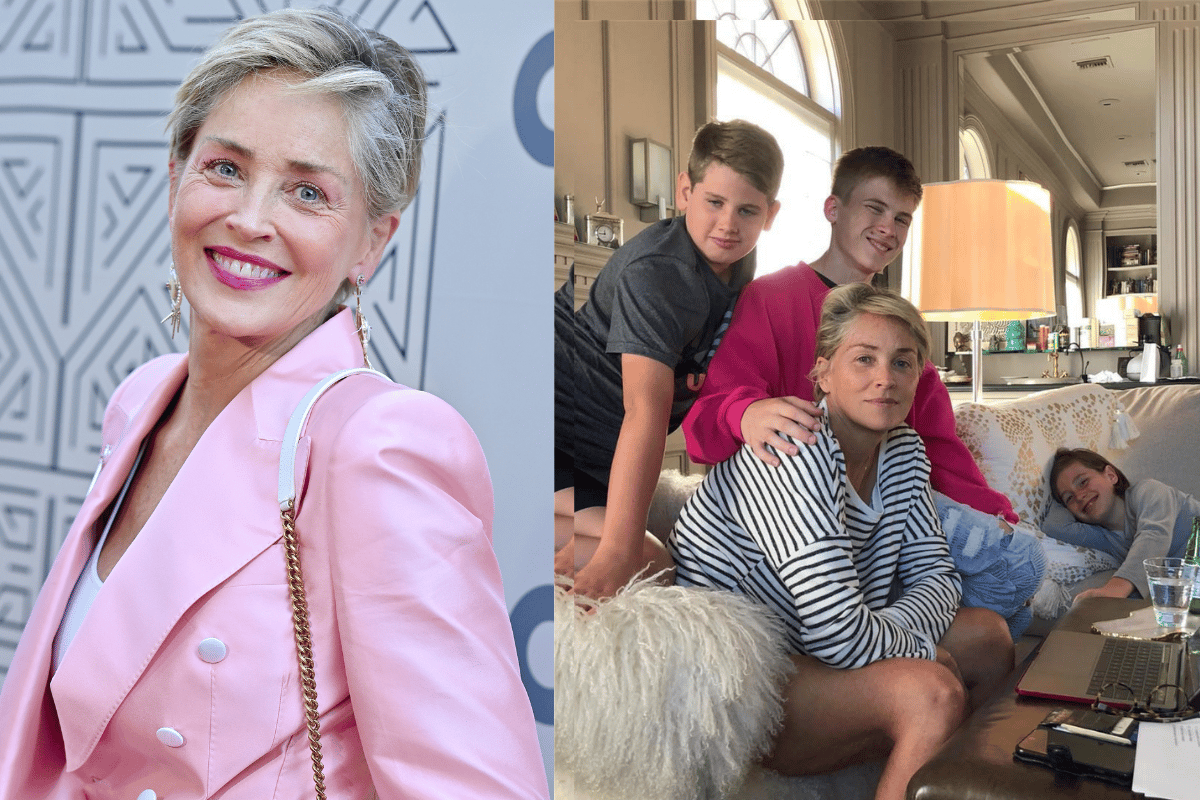 Known for iconic roles in Basic Instinct and Casino, she was one of the biggest, most bankable stars of the '90s. Then in 2001, a major stroke impacted not only her career, but her entire life path.

At the time, she was married to Phil Bronstein, an American journalist and editor. Bronstein and Stone had tried throughout their marriage to conceive. They sadly experienced miscarriage multiple times.

Stone said it was the difficulty to have a child and her stroke that changed their marriage. They managed to adopt a son, Roan Bronstein Stone, now 22. But in 2003, Bronstein filed for divorce, which was followed by a fight over the custody of their son.

Reflecting on the breakdown of the marriage, Stone told AARP magazine: "He [Bronstein] just didn't see me, talk to me, look at me... His initial intention with me was probably corrupt. I was suckered. I'm embarrassed to say that."

At first, the couple shared joint custody. But the custody battle ended with a judge ruling that Roan should primarily live with his dad, with Stone receiving visitation rights.

In her 2021 book The Beauty of Living Twice, Stone said that period of her life was one of the most difficult she has ever endured.

She elaborated to Saga Magazine, saying: "After I lost primary custody of Roan, I couldn't function. I just lay on the couch. I was so damn tired. I would cry. I couldn't focus on anything but having my son back in my arms. Nothing else mattered, just getting him back."

Court papers revealed that Stone "wanted to put Botox in her son's feet to keep them from smelling" and the judge reportedly said "Stone's overreactions to medical issues were a painful problem" for the child.

Stone has since signed a confidentiality agreement about the specifics of the custody ruling. And following a "very long, very difficult game of custody chess", Roan now lives with his mother.

After the marriage, Stone experienced a few additional miscarriages too.

In one instance, Stone said she went through "36 hours of labour alone" after losing a baby at five and a half months pregnant.

During a Radio 4 Women's Hour and BBC Sounds interview, she said: "It's a devastating experience and I have to say I was really grateful to Chrissy Teigen for allowing us to publicly share what she went through. I lost my last baby, went to the hospital and had 36 hours of labour on my own. The nurses that had been in the hospital with me two days before came in and sat with me on their day off. I really felt such a strong sense of sisterhood and understanding. Because I would have been alone. And that's such an alone feeling anyway."

Stone decided to adopt son Laird in 2005 and son Quinn in 2006, becoming a single mother to three boys. 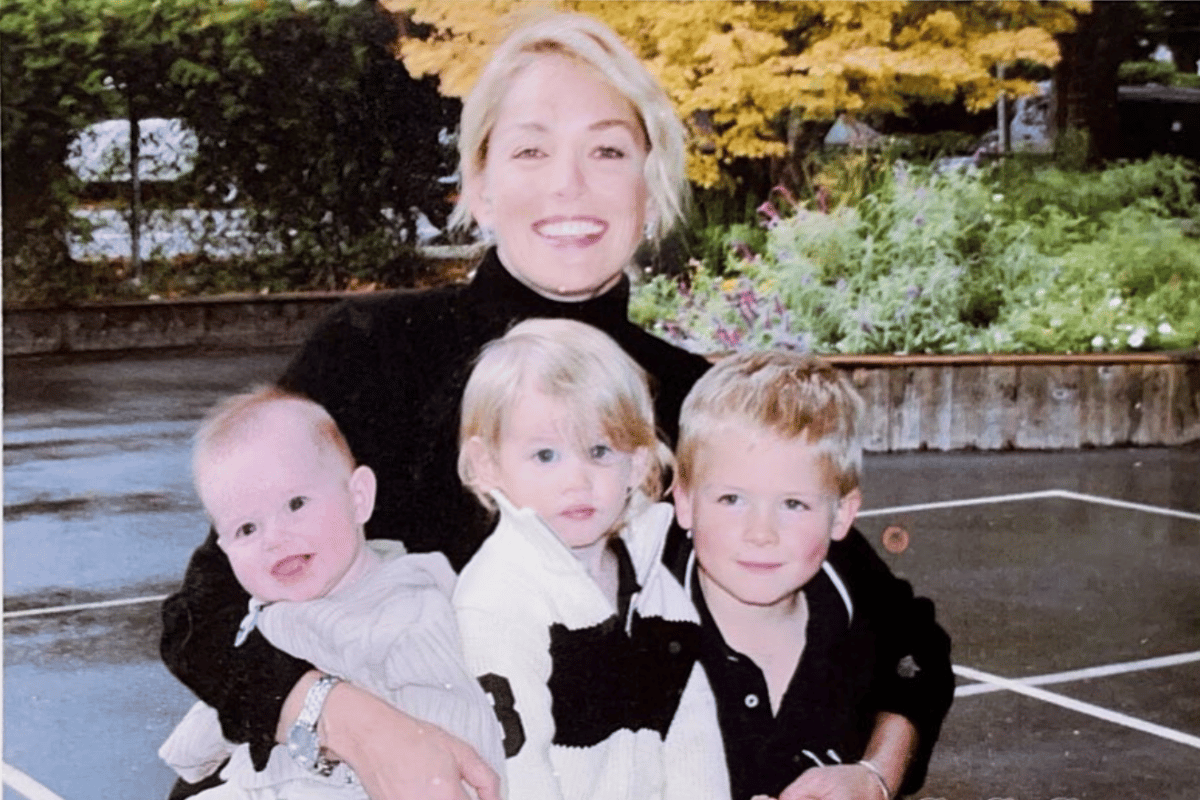 Image: Instagram @sharonstone. Stone has since shared that being a parent to her three boys completely changed her life.

"Having three kids certainly will change your reality. And I think that not trying to be a girl and allowing yourself to be a grown-up woman is also very helpful," she said to AARP magazine.

"I'm loving raising my kids. I've made humanitarian causes and my children much more my priority than the Hollywood scene, being liked and getting movie parts. Motherhood didn't come easily. It came lovingly to me by angels. We're a happy and lucky family."

Stone has repeatedly shared that she desperately wanted in a family of her own, especially after her challenging childhood and relationship with her own mother.

Before making the move to Los Angeles in order to pursue a career in show business, Stone grew up in 'near poverty in Pennsylvania's Amish country'. As a young girl, Stone said she got an abortion after falling pregnant by 'her first serious boyfriend'.

Stone was driven by her then-boyfriend to Ohio because she was 'too young' to get an abortion in her home state of Pennsylvania, she shared in her 2021 book The Beauty of Living Twice.

"I stayed in my room and bled for days... I was too afraid to tell anyone," she wrote.

As for her mother, Stone told PEOPLE that there was never much love shared between them.

So Stone decided to do the complete opposite with her kids.

Reflecting on the small silver linings of the pandemic, Stone said to Closer that having her kids at home and spending time together made them tighter as a family, especially given all they've gone through.

She continued: "Even though they spend a lot of time in their rooms when they're this age – and my kids spend a lot of time on computers, of course – we at least were in the house together, which I thought was really kind of lucky. Normally, your kids don't want anything to do with you at this age. So, it's kind of great to have the opportunity to observe them growing up."

Stone only recently opened up about her experience of miscarriage.

PEOPLE posted on Instagram a promo of their interview with famous professional dancing couple Peta Murgatroyd and Maks Chmerkovskiy, who shared their own story of suffering a miscarriage while Chmerkovskiy was in Ukraine looking after his family at the start of the war in February 2022.

Stone thanked the couple for sharing their story, commenting on the Instagram post that the conversation surrounding fertility issues needs to continue.

"We, as females don't have a forum to discuss the profundity of this loss. I lost nine children by miscarriage. It is no small thing, physically nor emotionally, yet we are made to feel it is something to bear alone and secretly with some kind of sense of failure," she said.

"Instead of receiving the much needed compassion and empathy and healing which we so need. Female health and wellness left to the care of the male ideology has become lax at best, ignorant in fact, and violently oppressive in effort."

As for what Stone's life looks like today, she's still acting, doing charity work and helping her eldest son get his start in the entertainment industry.

"Proud of my boys. Love being their mum."