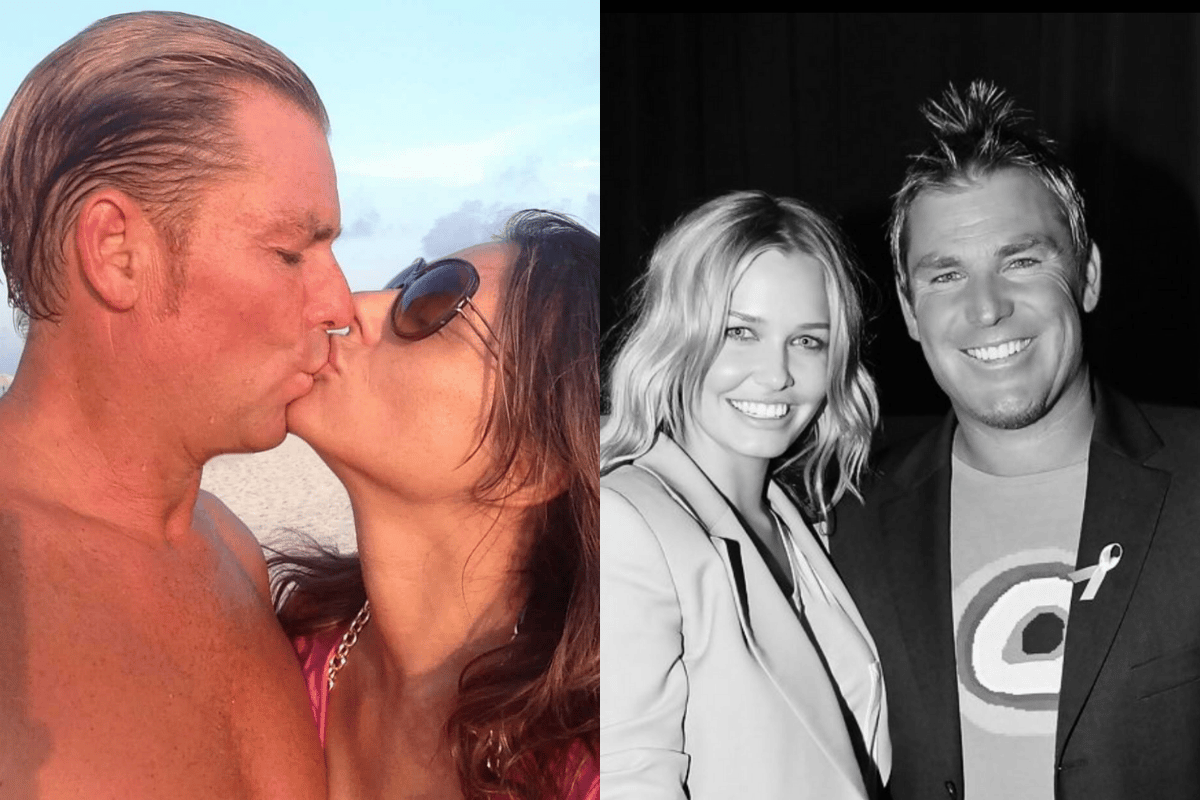 His management confirmed the news in the early hours of Saturday morning, saying the cricketer died in Thailand on Friday.

"It is with great sadness we advise that Shane Keith Warne passed away of a suspected heart attack in Koh Samui, Thailand today, Friday March 4th," the statement, obtained by the Sydney Morning Herald, read.

"Shane was found unresponsive in his villa and despite the best efforts of medical staff, he could not be revived.

"The family requests privacy at this time and will provide further details in due course."

The Victorian and federal governments have offered a state funeral to Warne's family, which includes his three children, Brooke, 24,  Jackson, 22 and Summer, 20.

"Nobody who saw Shane Warne play will ever forget him," Victorian Premier Daniel Andrews said on Saturday.

The singer had his own few words to mourn the loss of the great cricketer.

"A tragic day for Australian cricket. Two legends passing is heartbreaking," he wrote in reference to the passing of Rod Marsh as well as Warnie.

"I knew them both and played cricket with Rod in Perth. A very special and fearless man. Shane was a magical bowler and such huge fun. They were both Australians through and through, which made them so endearing. My sympathies to their families and loved ones."

The 'Shape Of You' singer wrote a hearty post to honour the life and legacy of Warne, to his 37 million followers.

"The world keeps taking incredible people away. I spoke to Shane on the anniversary of Michaels passing this week saying we were both raising a glass of 707 in his honour, and now this news comes out," he wrote.

"Shane was the kindest heart, and always went above and beyond to make people feel welcome and special. Such a gentleman. He gave so many hours and years of his life to bring joy to others, and was such an amazing friend to me.

In the early hours of Sunday morning, actor-model Liz Hurley - who was engaged to Warne from September 2011 until they split in December 2013 - paid tribute to her "brave lionheart".

"I feel like the sun has gone behind a cloud forever. RIP my beloved Lionheart @shanewarne23," she wrote.

Minogue, the Australian singer, actress, and television personality, wrote she was "devastated" by Warne's death.

"I am devastated to wake up to the news that Shane Warne has passed," she said.

"My heart breaks for his family and friends. He was such a light and energy in the room. He was always lovely to my whole family. He knew that I didn’t have a clue about cricket, but he liked that. To me, he was just Shane. I can still hear him say, 'Hey Disco how are you?'" 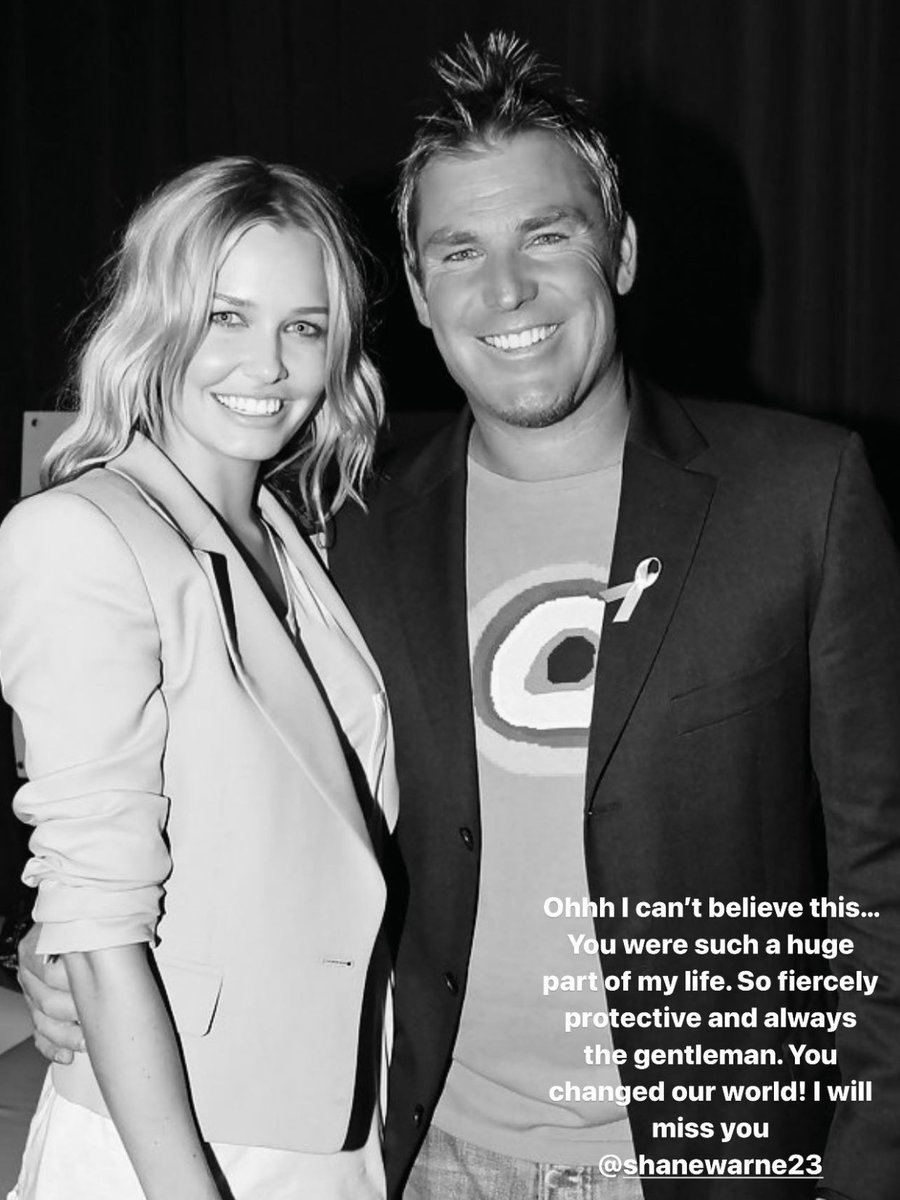 The model paid her respects via Instagram story to one million followers, writing: "Ohhh I can't believe this... You were such a huge part of my life. So fiercely protective and always the gentleman. You changed our world! I will miss you @shanewarne23."

Australian comedian and television presenter Andy Lee shared a tribute to Warne on Saturday morning, writing, "I’m lying in bed having just heard the news that a legend and friend has passed."

"He opened so many doors for me to the sport I loved and we shared a lot of yarns playing another sport we both loved," he added.

Hugh Jackman shared his condolences to Warne's family on Twitter this morning, writing that he is "grateful" to have known him.

Like you all I am in shock to wake to the news that @ShaneWarne had passed away. I’m grateful to have known him, and to have witnessed his once in a generation talent. My heartfelt sympathies to his family and close friends at this incredibly difficult time. Rest well Shane. pic.twitter.com/2nL5h0VGZR

Australian singer-songwriter, actor and comedian, Eddie Perfect shared a tribute to Warne on Saturday morning, writing about how he admired Warne for years.

"If you add up all the time spent reading, studying and writing about the life of Shane Warne, it felt like I had a master's degree in Warney," he wrote.

"After three years of writing, my interest in Shane had grown into something of an obsession, and I’d never met him. In fact, up until maybe 48 hours before these photos were taken in 2010, he detested the fact a musical was being written about him.

"But he came and saw the second preview at the Athenaeum in Melbourne and loved it. He gave me and the crazy musical I wrote his imprimatur and even came out through the festoon light doors on stage to take a bow on opening night. He was everything you hear about him; smart, funny, warm and generous.

"It was a privilege to meet him, and an even greater privilege that in the back booth of a restaurant on Little Collins Street after that second show, I got to tell him why I wrote the show.

"The news of his passing is so sudden and tragic and confusing. I know the nation and the world is in absolute shock.

"My condolences go out to his children whom Shane clearly and obviously adored, and to his family and friends.

"I just don’t want to say goodbye - there was so much more life to come.

"Others may try but they will never shine like Shane."

Fellow cricketing legend Glenn McGrath responded to the news of Warne's passing this morning, sharing that he was "absolutely devastated".

"Warnie was larger than life. I thought nothing could ever happen to him. He lived more in his life than most people would live in 20," he wrote.

"There seemed to never be a dull moment. He was a great mate and a loving father. He loved his kids so much and my thoughts are with Brooke, Jackson, and Summer," he continued.

"My thoughts are also with Keith, Bridgette, and Jason. Rest In Peace my good mate, there’ll never again be anyone like you."

He continued: "Jackson, Summer and Brooke - we’re all thinking of you. Thanks for sharing your extraordinary dad with us."

McGrath Foundation Ambassador & Director Tracy Bevan shared her condolences to Shane's family this morning, writing, "I can’t believe the news this morning regarding the passing of Shane Warne."

"I count myself lucky to have spent many years on tour with Shane and the Australian Cricket team," she continued.

"He would always stop when he saw me no matter how busy he was, ask about my family, and I knew if there was anything we needed for the @mcgrathfoundation, he wouldn’t hesitate to help out if he could.

"My heart goes out to his beautiful parents Brigette and Keith, brother Jason, his children Brooke, Summer and Jackson, and my dear friend Simone."

Magda Szubanski responded to the news of Warne's passing this morning, writing: "Woke in the middle of the night to the terrible terrible news that Shane Warne had died. I’m in utter shock. Inconceivable that a life crammed with so much genius and larrikin charm could be snuffed out so suddenly and so soon.

"When we filmed these immortal scenes, Warnie proved that he was not just a great sportsman, but also a great sport.

"In between takes we chatted, and I totally fell under the spell of the famed Warnie charm: he was thoughtful and very sweet. He grew up not far from me and so much of him was typical, Melbourne outer suburban boy. Except, of course, that he was blessed by the gods of cricket. My god. So blessed. But also dedicated and hardworking.

"He taught me - or rather Sharon - how to do the flipper and recounted how he would practice that spin hundreds of times a day until he could propel a cricket ball one metre straight up into the air just by clicking his fingers. His fingers were like small tree trunks.

"But mostly I remember how he spoke with such great love and pride of his beautiful kids. This is a shocking loss for our nation and for the cricketing world. And poor Sharon has lost her hero and the love of her life.

"But right now my heart is with his family and his friends - and most especially with his beautiful children Jackson Summer and Brooke whom he loved so very very much."

Journalist Leigh Sales shared a tribute to Shane Warne on Saturday morning, writing: "When I started at 7.30 in 2011, one person was at the top of my interview wishlist: Warnie. People were always incredulous at this, 'Out of everyone on the planet, you want to interview Warnie?' I did because I felt that, except for one interview by Michael Parkinson when Warnie retired, Warnie had never been given a serious in-depth TV interview that treated him properly.

"He was a genius and historically important cricketer but also something that’s increasingly rare: a true and original character who was unapologetic about who he was.

"I couldn’t understand why he had never been interviewed with the respect all of that deserved and I really wanted to do it. It took seven years to make it happen - Warnie didn’t know who I was, he didn’t really get what was in it for him to do it etc.

"Finally, it happened in 2018. I opened by saying, 'Nice to meet you, Shane' and he replied, 'Nice to be met' and from that moment, I knew he would be gold. And he was - smart, charming, interesting, vulnerable, honest.

"He could be a dick, but he knew it and didn’t try to hide it. I remember in his book, he gave one chapter to his kids to write. You could tell how much they loved him. More than that, they understood him. Their vibe was yes dad has hurt and embarrassed us, but he has also loved us and we love him too. It was very touching. I liked him enormously.

"Vale Warnie, the country will be less bright and interesting without you, and condolences to his family and friends."

Reply
Upvote
1 upvotes
It is often said one should leave a place while they are still enjoying being there....Shane was enjoying every minute.
A
azzuri 3 months ago