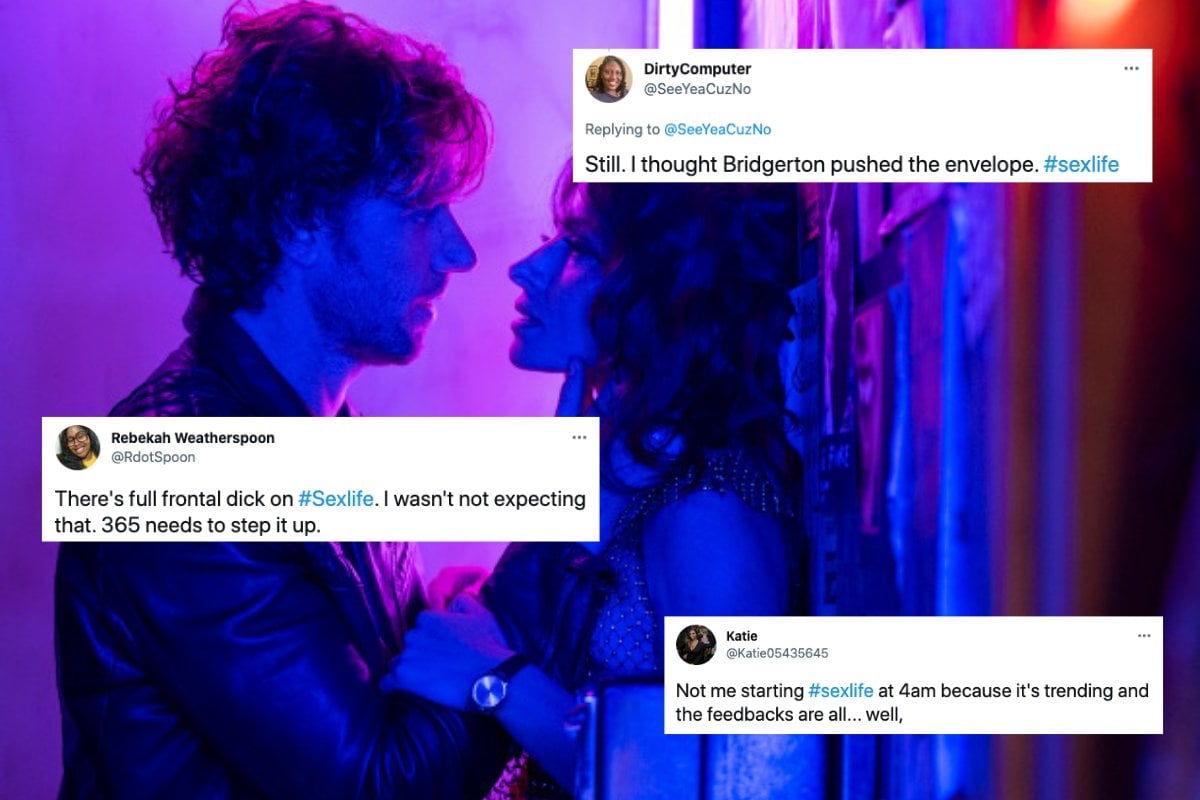 Just when another Australian state is plunged into lockdown, the Netflix gods have smiled down at us.

It's called Sex/Life and it has way more connection to the first half of its name.

The show focusses on Billie, who is married to the rather dashing (but equally straight-laced) Cooper. However, there's something brewing...

"He is my favourite person, and I want to live 100 years together and die at exactly the same time," says Billie.

...specific, with a hint of homicide.

"And I want our souls to find each other as soon as possible, so we can fall in love and make more babies all over again."

It's weird, it's romantic, and we're waiting with baited breath for the 'but' and...

Watch the trailer for Sex/Life in full right here. Post continues after video.

What follows is a rampant search for Billie to find, er, satisfaction again - and obviously that involves her extremely hot ex-boyfriend, Brad.

While we won't give away the whole story, we do want to share with you some of the hilarious reactions to the show that everyone is watching right now. Because the people are randy, and they desperately want to share their thoughts.

I watched Sex Life for the plot.
The plot: #AdamDemos #Sexlife #Netflix pic.twitter.com/7zjBzfuIm2

Me and my friends when dude went full frontal…#sexlife pic.twitter.com/QpJGb5K8Ed

When I saw her husband read her diary and then put her on the table #sexlife: pic.twitter.com/XUCn6mtMGF

coming across the new #sexlife series on netflix and then realizing I have none. pic.twitter.com/1ia8QTopX0

Me: why is everyone talking about a gym scene?

just finished episode 4 of sex life AND DID HE JUST SHOWED HIS GENITAL THROUGH THE FUCKING FACETIME 😲💀 #sexlife pic.twitter.com/unER246ZWo

Eight years and she still has his phone number saved??…with his real name?!? #sexlife pic.twitter.com/kdc3sQJaH4

Billie when she saw sasha giving the guy head:#sexlife pic.twitter.com/RBux74RchC

When I tell you I gasped out loud , I literally GASPED…. iykyk #sexlife @netflix 🔥🔥🔥🔥 pic.twitter.com/TpcDsnJRpi

What in the hell am I watching?! #SexLife pic.twitter.com/wdZXlpKyAs

Oh, and you should note while watching this show that Billie and Brad IRL are dating. Yep. Let that sink in.

important to note that the leads of #SexLife, Adam Demos and Sarah Shahi, met on set and are now dating.(the showrunner commented "you're welcome" on Sarah's most recent post) pic.twitter.com/i0Z5R7qxWp

After seeing THAT particular scene in episode 3...she's won in life 😂 #sexlife pic.twitter.com/GELeWeOReJ

There's full frontal dick on #Sexlife. I wasn't not expecting that. 365 needs to step it up. pic.twitter.com/aoNePAUros

Me when brad turned around in the shower #sexlife pic.twitter.com/rwWoe0I2Jd

They dont make them like Cooper no more #sexlife pic.twitter.com/gmwZpkbIdi

Because Billie, what are you doing? #SexLife. pic.twitter.com/fENAZrhlDo

I am shouting this at the top of my lungs, don’t watch #SexLife

Me at the end of #sexlife episode 1 pic.twitter.com/qo19cy36U7

Me initially watching: Ain’t no 🍆 that good!

*after watching that shower scene*

This is why Sasha Snow is my favourite character in #SexLife pic.twitter.com/Nv9kwDwMvD

This show is exactly what I needed this weekend. Just wow. #SexLife pic.twitter.com/jcN4CsPXM5