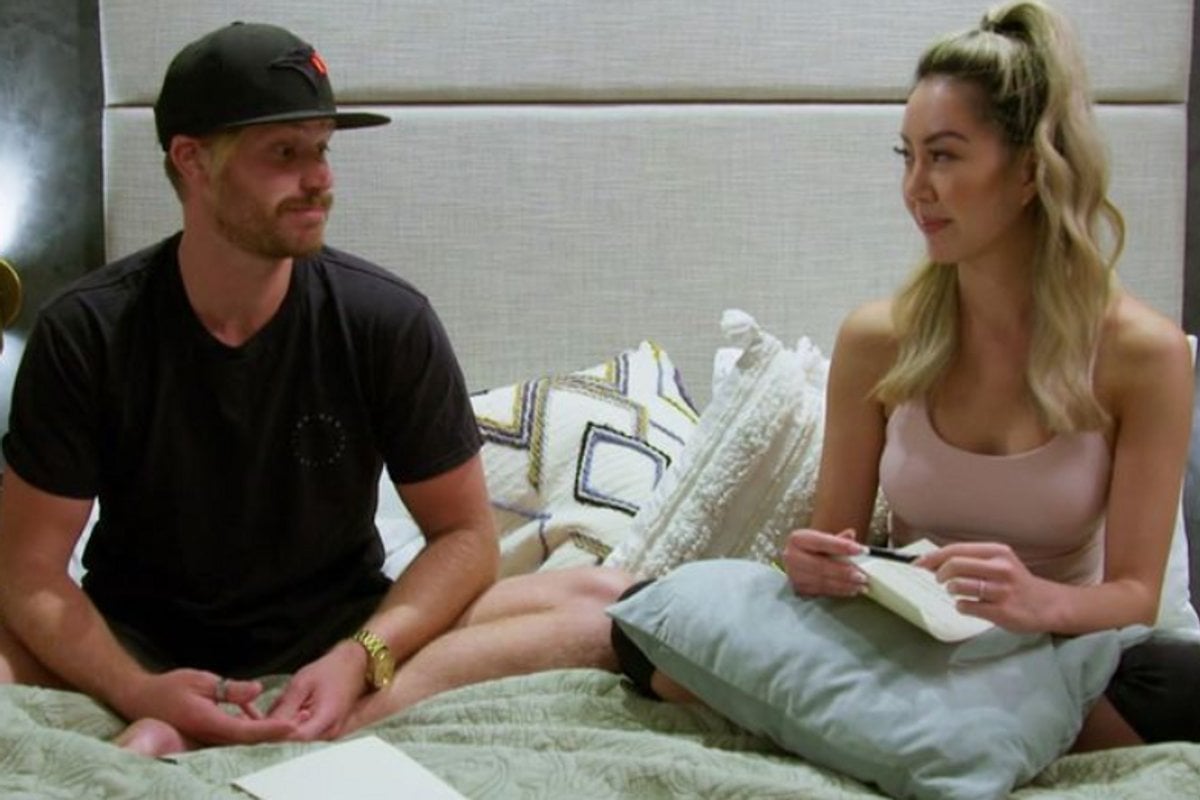 The episode was, as usual, a doozy. There was talk of whether it was okay to have sex during menstruation, Selin pointed out for the first time that her husband Anthony left their honeymoon and that's why they have issues in their marriage, someone said something about sex in the ocean and lubrication - let's move right along - and of course, there was a chat between Selina and Cody, a biracial couple in the experiment, about attraction and race.

After previously being told by Cody that "it’s like my schlong isn’t co-ordinating with my head" when she asked whether he was attracted to her, Selina has been feeling naturally quite upset. Then in last night's episode, Cody placed her second in the photo ranking task, after blonde-haired and blue-eyed Sam.

The dots began connecting for Selina.

"Is the lack of interest, attraction, and affection due to my nationality and look?” she asked Cody, bluntly.

"Uh, ok, it's uh," Cody replied. "I think it did honestly play at it initially. I’m not racist by any means but it's not something I’m familiar with. It's not... Yeah, to be honest, the short answer is it probably did... I’ve always sort of been open to the idea, it’s just something I’ve never normally gone for. And I don’t know what that’s from... personal preference."

The response from Australia has been swift, damning, and rightfully furious. Some have questioned why it was even aired in the first place, while others are putting the blame squarely on the show's producers. There has been an overall sense of disbelief that someone could say something so stupid and hurtful. Many Asian-Australians watching or reading the headlines today probably cannot help looking back on their own experiences with racism, including me. With movements like "Stop Asian Hate" and "Black Lives Matter" becoming more prominent in recent years, race relations is triggering to a number of people.

To many, it's simple: Cody is racist and should be removed off the face of the earth. I wouldn't be surprised if he's in the witness protection program right now.

Race and racism are always fraught issues to speak or write about. So fraught that sometimes conversations that should be had are swept aside because no one is willing to wade into the murky waters for fear of being bitten. In this age of quick soundbites and clickbait headlines, we form opinions in milliseconds. Civil discourse gives way to yelling and shouting, to anger, hurt, and pain. All of us are losers in this scenario.

So, let's try something different. Instead of just screaming, "He's racist!", let's look at the lessons we can learn and how we can bring about positive change. Yes, MAFS is a reality TV show, but it is also representative of Australian society. So if Cody thinks the way he thinks, you can bet there are others who do too. Why do they think this way?

Listen: There's a scientific reason you're obsessed with MAFS. Post continues below.

Part of the explanation is the environment we are raised in. Cody is from the northern beaches of Sydney in NSW. It's not called the insular peninsula for nothing. According to the northern beaches council, the three main ethnic demographics are English, Australian, and Irish. Basically, Cody grew up surrounded by white people. He is from a white family and his friends and past girlfriends are white. It's what he knows and understands. There is nothing wrong with that.

I was born and raised in Fiji, whose two predominant ethnicities are Fijian and Indian. I went to a mixed, co-ed school, so I was a Chinese girl with many Fijian, Indian, Chinese, and white friends. My first boyfriend was Fijian-Chinese. My second was Indian. Does that make me any better than Cody? Absolutely not. I am a product of my environment, just as he is.

What we consume from an Arts and Media point of view also informs our thinking and emotional state. There is still a distinct lack of diverse people on Australian screens, but can you imagine how much worse it was as Cody was growing up? The TV shows and films he watched were likely filled with just white people; same for the books he read and probably the school he went to. I know what you're thinking: Since Cody is now an adult, shouldn't his choices have broadened? Shouldn't he be seeking to expand his horizons? Sure, but we form our core principles in childhood. The pillars that hold up our foundational floor are what we learn when we're kids and it's not easy to unlearn those lessons.

For example, when I was a child I thought girls with blonde hair and blue eyes were the prettiest because that's what all the dolls looked like, and that's what people in movies looked like. It took me a very long time to unlearn that lesson. 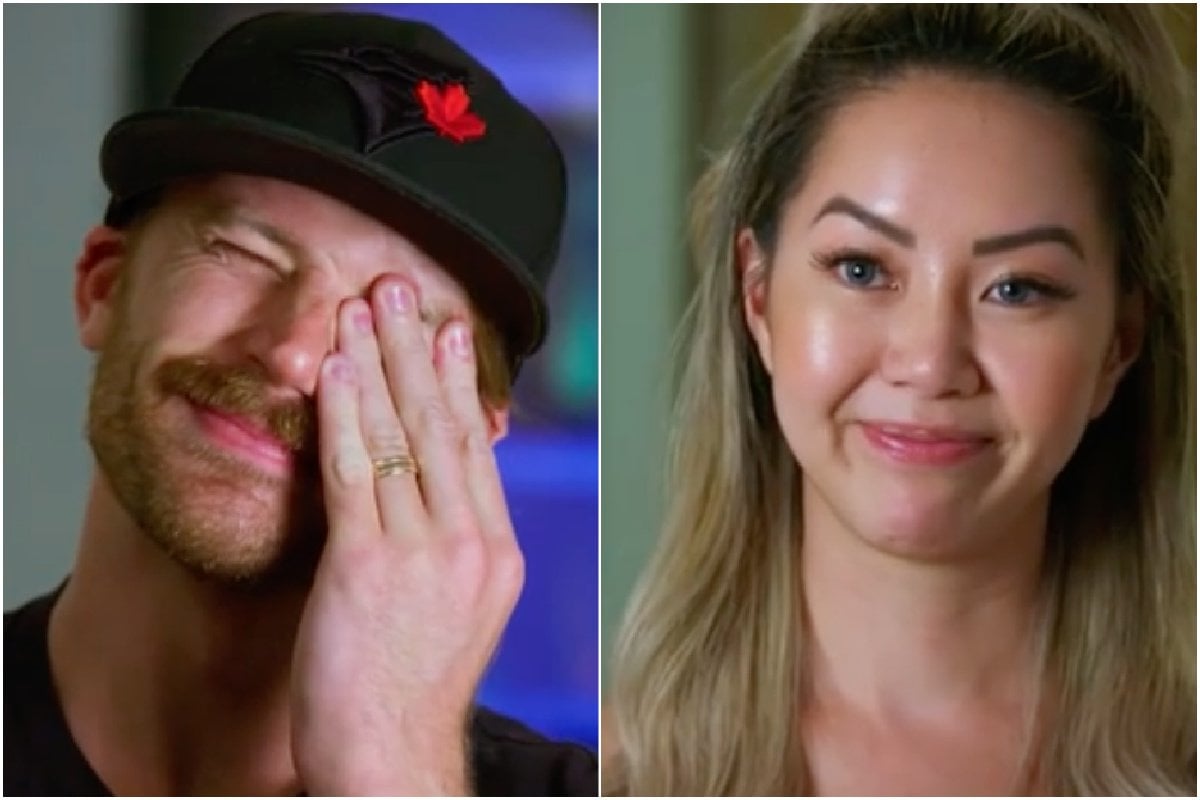 Ok, it's time to go to a place of complete honesty now. Have you ever heard one or more of your friends say something like, "I'm not attracted to Chinese men. They're just not my type." Most likely you have. And maybe you agreed, out loud or in your head. Maybe you still agree with it now.

Would you call yourself or your friend racist? Probably not. You probably call it "personal preference", just as Cody did.

Phrases like "not my type" and "personal preference" are loaded. Again, it comes back to your upbringing. You might not be attracted to Chinese men because you hold some stereotypes in your mind from things you read, saw, watched, or heard as a child or teen. Is it your fault? That's complicated. It's society's fault, but we are all a part of society, so in a way, we are all complicit.

But maybe, after seeing Malaysian-British actor Henry Golding in Crazy Rich Asians, you're a little more open to the idea. Or perhaps Chinese-Canadian actor Simu Liu in Shang-Chi really did it for you. Or maybe you've seen Singaporean-Chinese-Australian presenter Melissa Leong on MasterChef Australia.

That's where positive change comes in. I think that bringing diversity into all facets of life, especially the entertainment and media industry, is extremely important. If you see people of colour on your screens and in your newsfeed, if you see their books on the bookshelves and kids playing with dolls of all ethnicities, that's how we make things better. No, it doesn't solve the problem overnight. You can't just "solve" racism. But, by god, it will help. You cannot be what you cannot see, and stereotypes will continue to hurt if we are unwilling to open our minds.

There can't be any positive change if we just dismiss someone as racist and shut the conversation down without looking at the "why". We have got to be able to discuss our own prejudices and our own shortcomings too. If not, we are just throwing stones at glass houses.

Going back to MAFS, I'm sure Cody has learnt an important lesson about himself. Will he continue to grow? Let's hope so... once he's out of witness protection.

And it goes without saying that Selina is the MVP of that relationship. After going through bullying about her ethnicity when she was younger, it is absolutely crushing that she has had to go through this again. You can see the pain she's in as she sobs on the sofa alone at the end of the episode. She should be proud that she has held herself with dignity and grace, and that she's contributing to a very important discussion. She deserves our support, understanding, and our (virtual) hugs.

Because like everyone else in the world, she is so much more than just the colour of her skin.

Reply
Upvote
1 upvotes
I'm about as left wing and socialist and anti-racist as they come, but I think it's important not to invalidate and minimise a person's preferences as racist. Would we do the same to an African American who admits they only date within their race? Or Middle Eastern Muslims? Would we call them racist? It's only natural to want to marry your own kind. An African American man is no more racist for only marrying an African American woman, than Cody is. Or a Muslim woman from Punjab who only will marry an Arabic Middle Eastern Muslim man. Having a racial preference for a life partner does not necessarily equate to racist. Be careful not to tar all other ethnicities and religions who will not date outside of their own race. I do wonder if Cody were an African American or Middle Eastern man would he be called racist?
L
laura__palmer 3 months ago

Reply
Upvote
@salemsaberhagen I think that is different, especially since a lot of the time POC stick together because of white oppression. I think if you have "preferences" as a white person, you need to examine why.
V
vidav 3 months ago