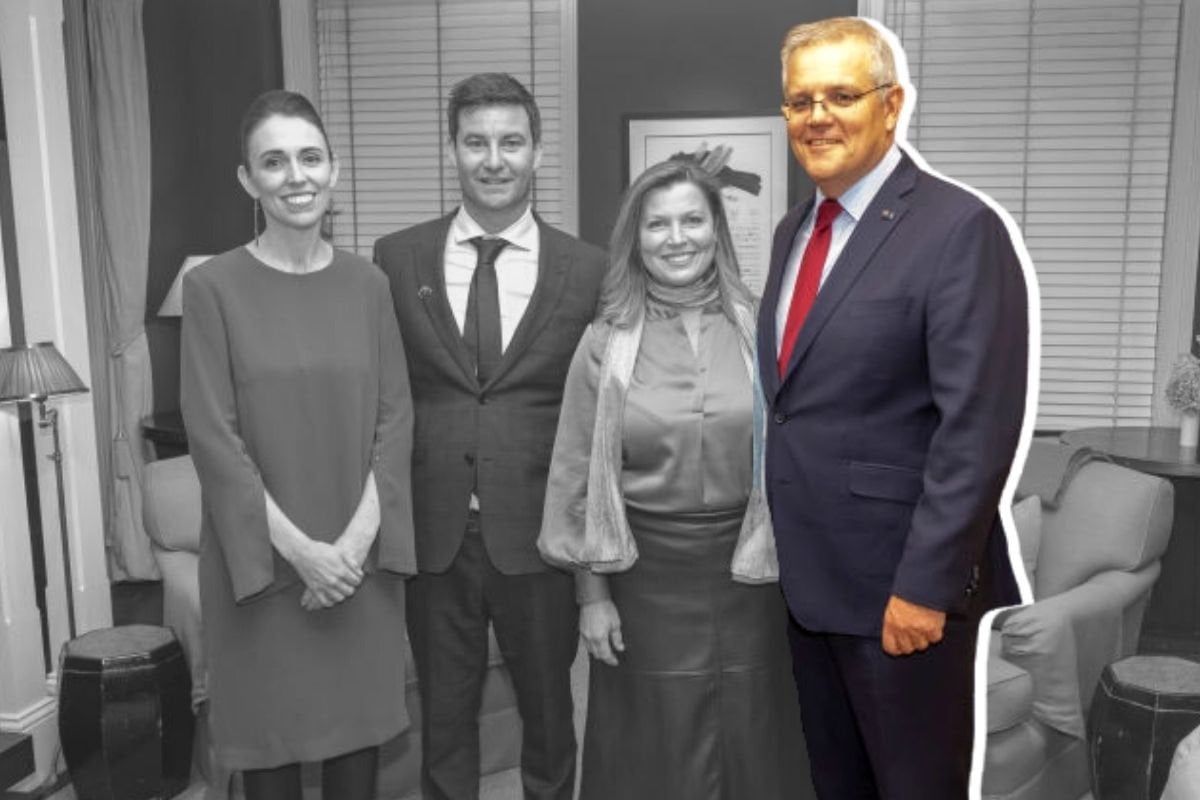 In December 2019, our Prime Minister ducked out of Australia for a little R&R in Hawaii whilst his constituents battled one of the worst bushfires on record.

It didn't end well for him. But alas, Scott Morrison appears to have forgotten about that fallout as he smiles for media opportunities across the ditch.

Yes, his trip to New Zealand isn't a holiday. But while Victoria's latest COVID outbreak continued to worsen over the weekend, our leader was sipping champers and watching the sunset over Queenstown with wife Jenny, New Zealand Prime Minister Jacinda Ardern, and her husband Clarke, after arriving in the country Sunday afternoon.

As we know, politics is often about optics. And Morrison's gondola ride and private dinner certainly sent a message: Sorry, Melbourne, I've got views of Lake Wakatipu to enjoy. 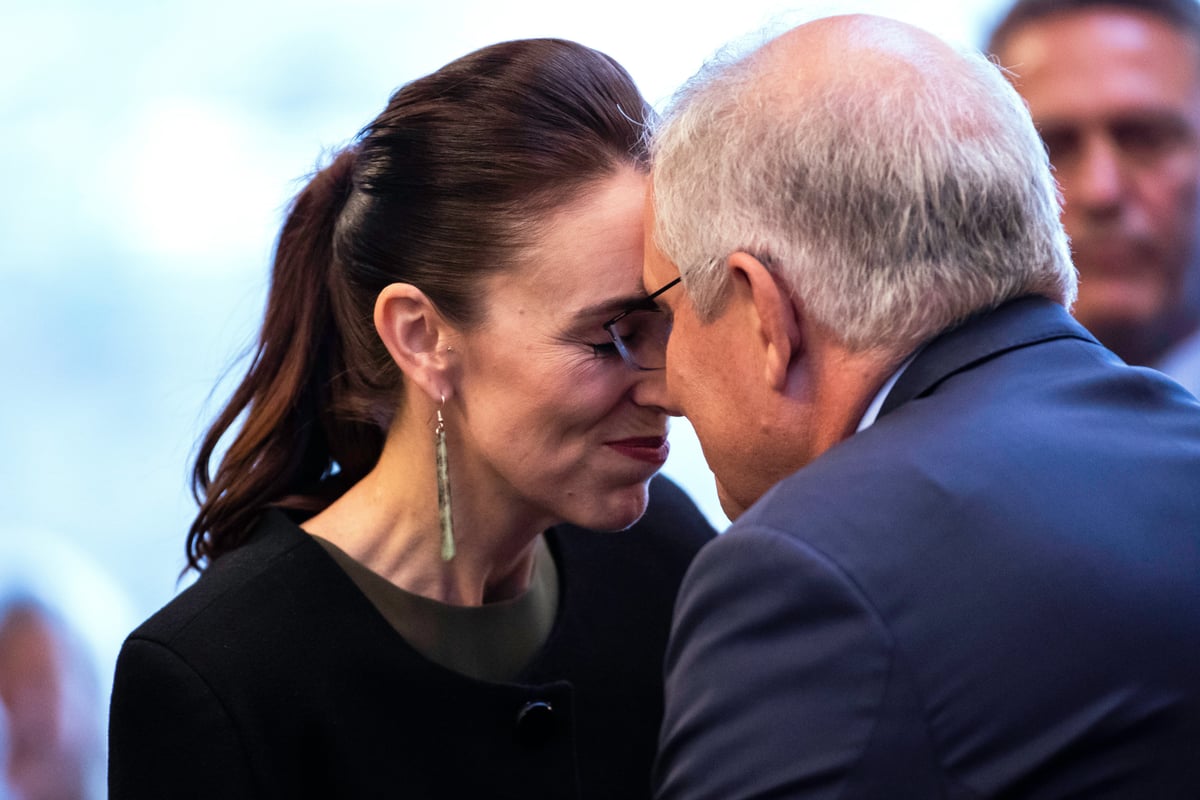 With an entire state in crisis, Morrison spent his Sunday posing for media opportunities after arriving in New Zealand. Image: Robert Kitchin - Pool/Getty.

Meanwhile, an escalating situation in aged care could see Victoria facing an extended lockdown as its cluster swells to 45 cases and 279 exposure sites.

Of the five new cases detected on Sunday, a female aged care worker was deemed a "mystery case" - which is a big concern, as Deakin University Professor Catherine Bennett told The Project. With only half the residents and a third of the workers in the Arcare facility vaccinated, Prof Bennett said an unlinked case popping up in "our most vulnerable and sensitive setting" is a "worst-case scenario."

While state failings of course contributed to Victoria's current situation, they were at a severe disadvantage thanks to the Federal Government's sluggish pandemic response.

Scott Morrison keeps telling us that the vaccine rollout "isn't a race," but try telling that to a state that is onto its fourth lockdown.

Watch: As Jan Fran told The Project...it kinda is a race. Post continues after video.

The Age reports the COVID-19 hotline received more than 77,000 calls in just 15 minutes on Thursday, after the government announced people aged 40-49 would be able to receive the Pfizer vaccine in Victoria.

Over the weekend we saw vaccination hubs swarmed by Victorians desperate for a COVID jab.

Video obtained by 9NEWS, taken from outside a Melbourne centre, showed a female medical worker stepping outside to inform those waiting there were no Pfizer vaccines available for walk-ins.

"Please stop yelling at me," she tells the crowd. "It's not fair. I'm doing my best."

A surge in COVID-19 vaccine demand has forced workers to turn people away from a Melbourne vaccination hub and overloaded a dedicated phone line. #9Newshttps://t.co/1DwiOINUQp

But these lines shouldn't be clogged. There shouldn't have been hundreds of people lined up for hours in the cold, or sitting vulnerable and unvaccinated in aged care facilities. Because the large majority, particularly the elderly, should've already been vaccinated. Four million Australians were supposed to be immunised by the end of March, but heading into June we've only just surpassed 3.5 million receiving one dose. Thanks to the Federal Government's snail pace, Australia is one of the slowest in the developed world to immunise its population.

Team that with the fact that medical experts have continuously warned us that hotels are not appropriate quarantine facilities, and this outbreak should be a hell of a wake-up call to the Morrison government about their flawed response to the pandemic.

Scott Morrison has continuously defended the hotel system as "99.9 per cent effective," but as the ABC's Michael Rowland points out, that 0.01 per cent is wearing thin.

Once again, this latest outbreak can be traced back to hotel quarantine.

The PM says Hotel Quarantine has been 99.99% effective.

The 0.01% has sparked lockdowns/restrictions in most cities.

Howard Springs has a 100% success rate. No lockdowns. No deaths.

As Victoria's situation goes from bad to worse, thousands of businesses are staring at a possible lockdown extension with no JobKeeper to keep them afloat. During a scathing press conference on Sunday, Victoria's Deputy Premier James Merlino revealed that the Federal Government is choosing to leave them scrambling on their own.

"Victorian workers need support and that is where we needed Canberra to come to the table, and I am very sorry to say that they have refused to do that," he said.

"Victorian workers deserve more from the federal government and I am beyond disappointed that the answer from the Prime Minister and the Treasurer has been no."

Acting Premier James Merlino says the Victorian govt was denied financial assistance from the Federal Government. Treasurer Pallas: "It would be really good if the self-styled party of the workers actually did some work for working people." #Auspol @SBSNews #MelbourneLockdown pic.twitter.com/cWvwph5sNX

And so, as Victoria battles its way through the most serious outbreak Australia has dealt with in months, our leader has made it quite clear the plight of nearly seven million Victorians are not a priority for him right now.

On the agenda over in Queenstown today, Morrison will be busy discussing China, tourism and immigration with his New Zealand counterpart.

It begs the question: where the bloody hell are you, ScoMo? Your country needs you.

Reply
Upvote
I think this article is unfair on ScoMo. The Federal Government has given Victoria plenty of financial aid over the past 12 months. Perhaps James Merlino and our State Government should take responsibility for decisions (they) made and shutting us down for the fourth time. Statewide lockdown is hurting small business. Why not try locking down the hotspots first and see how that goes first?

Reply
Upvote
2 upvotes
@siany remember the first time they did that, and it ended in over 100 days in lockdown and hundreds of deaths?

Reply
Upvote
@siany You really don't have a clue about virus transmission and contact tracing, do you?

Reply
Upvote
3 upvotes
Let’s hope people remember this debacle when the election comes around and aren’t distracted by the next shiny thing the Feds try to spin.  The most incompetent PM and government I have ever seen, and I am getting on abit, so I’ve seen a few.