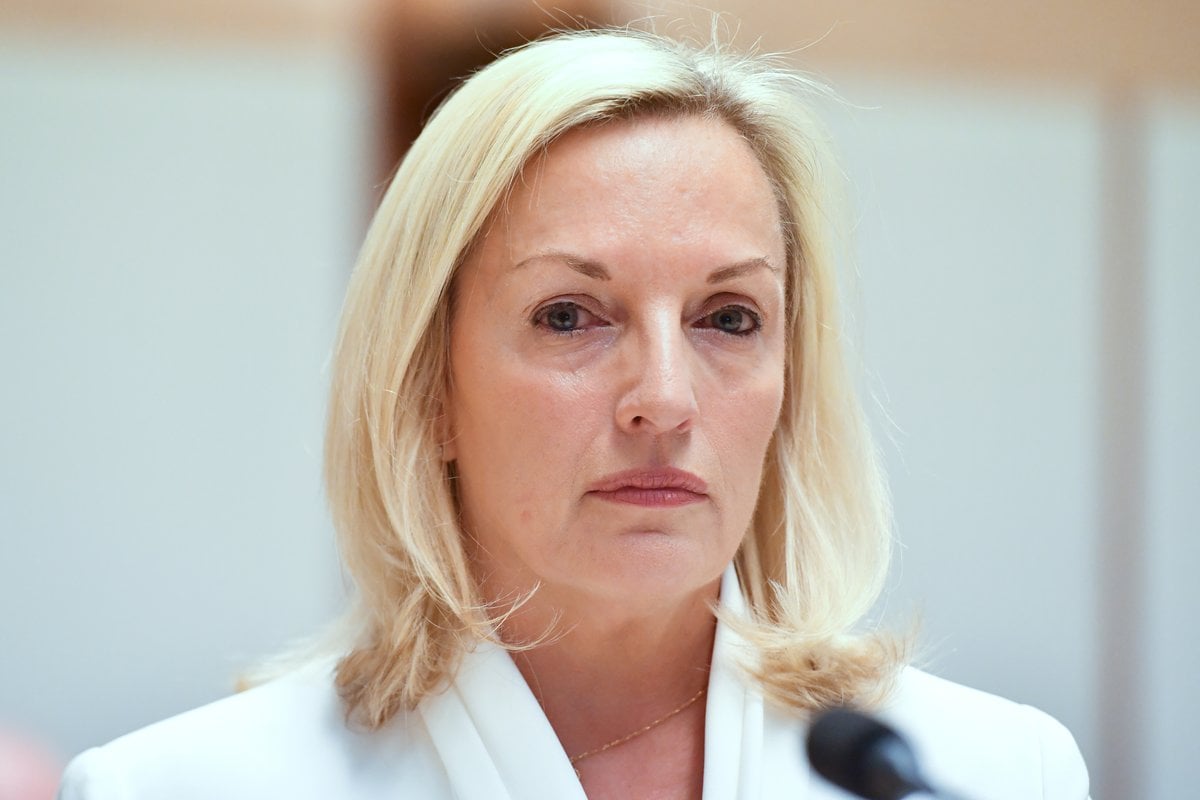 Christine Holgate was a shining beacon for female solidarity yesterday.

The former Australia Post CEO wore white, the colour of the suffragette movement, in a senate inquiry where she defended a leadership decision she made three years ago.

It was arguably a nod to the female struggle to break the glass ceiling and a symbol of the importance of women’s rights.

In case you missed it, Christine Holgate was facing questions about her departure from the government-owned corporation. Late last year, it was made public that Ms Holgate gave four Australia Post executives luxury Cartier watches for securing a lucrative deal with three major banks in 2018.

In 2017, Christine Holgate became the first female CEO of Australia Post in their more than 200 year history.

Her appointment came after public furore over the salary of the then-chief executive Ahmed Fahour, who was earning an estimated 119 times more than a postal worker. In 2015-16, he pocketed $5.6 million.

Weeks after the controversy, Ahmed Fahour stepped aside, and the first female CEO stepped up. Ms Holgate’s salary, whilst still eye-watering, was substantially less than her predecessor’s. Alas, Ms Holgate’s appointment was rightfully celebrated for her breakthrough of the glass ceiling.

In her three years as CEO, she steered the ship amid a surge in demand caused by the pandemic and oversaw considerable year-on-year revenue increases.

But when controversy erupted, it was Ms Holgate who took the fall.

When the watch scandal swept the news cycle, Prime Minister Scott Morrison was the most vocal critic of Ms Holgate when he viciously and vehemently exclaimed his “outrage” at the purchase of these luxury watches last October.

"We are the shareholders of Australia Post on behalf of the Australian people... she has been instructed to stand aside, if she doesn’t wish to do that, she can go," he said on the floor of Parliament House, executing what was effectively one of the most visible public sackings in the history of Australia.

Less than two weeks later, Ms Holgate resigned - though she had little option. An independent report has since found she broke no policies, but did not act within certain guidelines of her role.

"The simple truth is, I was bullied out of my job," she said during the senate inquiry on Tuesday.

"I was humiliated by the Prime Minister for committing no offence and then bullied by my chairman… I was hung in Parliament, humiliated, not just hung, run over by a bus and reversed again."

Watch: Christine Holgate on the Prime Minister humilitating her in Parliament. Post continues below.

Her case is an extraordinary example of the ‘glass cliff’, a theory coined in 2005 by British academics Michelle Ryan and Alex Haslan.

Their study found that “while women are now achieving more high profile positions, they are more likely than men to find themselves on a ‘glass cliff’, such that their positions are risky or precarious”.

You see, women are often given positions of power when a company has recently experienced bad performance or press. Then when things go wrong, the woman single-handedly shoulders the blame and is held primarily and personally accountable for the business failure. It ultimately ends in her resignation or dismissal, only serving to perpetuate the sexist stereotype that women are ineffective leaders.

While the glass ceiling acts as a barrier to prevent women climbing further, the glass cliff is the thing that she is the first to be pushed over when things go wrong, while the men remain standing.

It perfectly explains what happened to Ms Holgate. And the consequences can be devastating. As she revealed on Tuesday, she became suicidal after the public humiliation.

Ms Holgate herself has said she was treated differently to men in powerful positions, pointing to a Four Corners report on Cabinet ministers Alan Tudge and Chistian Porter that aired around the same time as the Prime Minister called for her “to go”.

"Following that program, the Prime Minister was asked about the behaviour of two of his ministers, his response was 'it was two years ago'," she told the inquiry.

"I gave four watches in reward to people who brought an incredible contribution to Australia Post two years ago. That was never shared,” she recalled.

"So do I believe it's partially a gender issue? You're absolutely right I do.”

Today, the Prime Minister disagreed, saying his call for Ms Holgate’s removal had “nothing to do with gender”.

But for the Prime Minister to say this is to blind himself to the experience of many female leaders. Because being a woman in leadership is too often a trap.

Reply
Upvote
the treatment of this woman is disgusting especially with the way she turned australia post around. If she had given the rewards in a cash bonus, nothing would have been said about it and we should remember, she DID NOT decide on this herself, the board did so why is the pompus chairman still in his job. Politicians waste a hell of a lot more money doing stupid things all the time so the treatment of this woman is nothing short of terrible.
M
mamamia-user-37788940 a year ago

Reply
Upvote
Might feel more sympathy for Holgate if Australia Post had not become so self-centred and officious, when it needs to be a facilitative public service. For example during the bushfires for a number of important days it stopped essential deliveries in some places affected by smoke, without providing any alternative pickup point for the public to go and get the items - while other essential services provided skeleton staff with protective measures for the staff. Other examples - robotic phone answers; counter staff acting dismissive of passport documents for people who were citizens long before the staff had come into the world.
Resources
Very Peri
News
General
Opinion
True Crime
Politics
Sport
Explainer
Entertainment
Celebrity
Reality TV
Movies
TV
Books
Rogue
Royal
Lifestyle
Beauty
Fashion
Weddings
Home
Wellness
Health
Fitness
Travel
Food
Family
Before The Bump
Pregnancy
Baby
Kids
Teens
School
Parent Opinion
Work & Money
Money
Finance
Career
Lady Startup