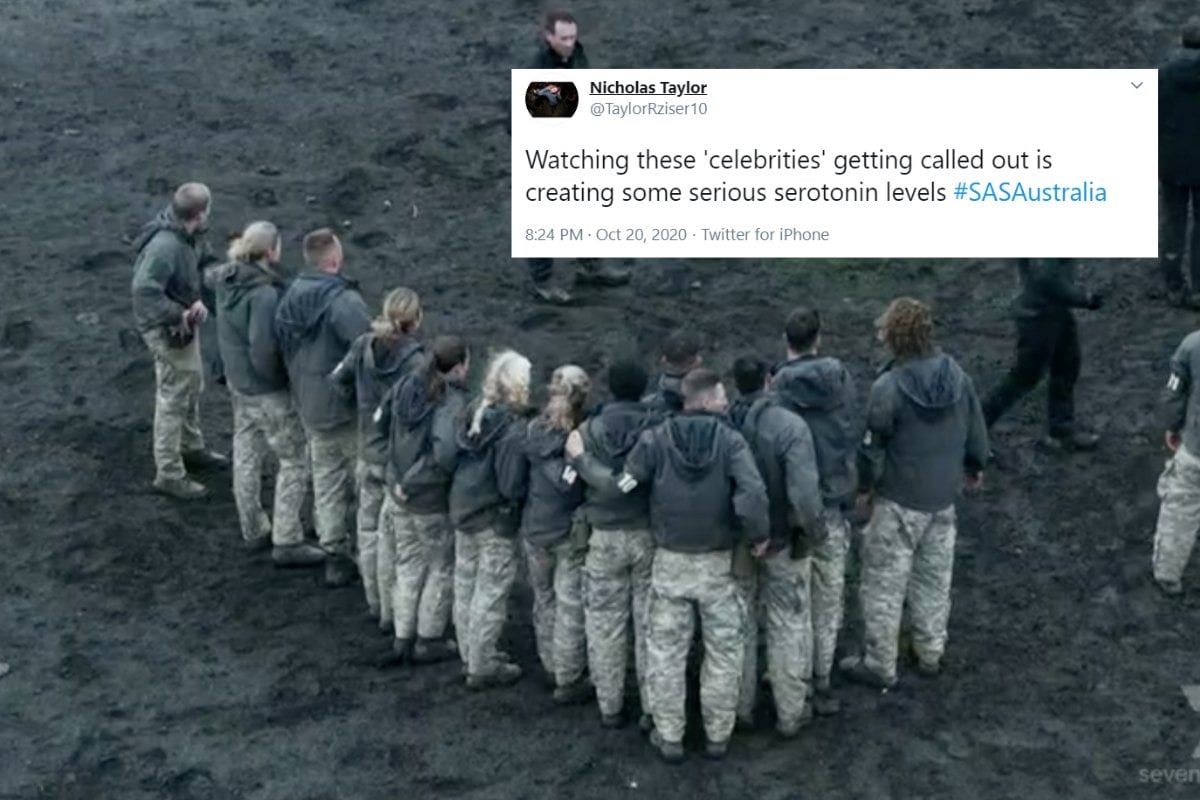 We're only two episode deep with SAS Australia and we can confidently say that this is the show we were all craving. Unbeknownst to us, the remedy for a shocker of a year was watching a handful of celebrities crawl through mud and throw tyres at each other's faces.

Is it weird that we find it somewhat, mediative? We'll check with our therapist...

In this episode we farewelled Arabella pretty early on and Schapelle, who called 'VW' after having to run up and down a big a** hill as 'punishment' for Firass Dirani being a bit too cocky.

Following her departure, we were presented with a classic game of 'Murderball'. Haven't heard of it before? Us neither. But it involves fighting over a tyre while attempting to run in a thick pile of mud - so it makes for great television.

We watched the Honey Badger literally body slam every single contestant and the hits were even slow-mo-ed allowing the whole of Australia to go, "OOOOFT!" as the two bodies smashed into each other.

Then Firass Dirani gets grilled by 'staff' and they whip out this stunner of a line: "You use a lot of long words that mean nothing." With a stern warning to "change your attitude," Firass is sent on his not-so-merry way and back to the beautiful five-star accommodation.

But what did you lot think of this episode of SAS Australia? Here's the best Twitter reactions plonked in one spot for your pleasure.

This is brilliant TV. Proper celebrity interviews by a couple of mad bastards getting great answers. Genius. #SASAustralia

Jackson Warne expanding his culinary experience on #SASAustralia is something I didn’t see coming.

No beanie, jacket or gloves in the cold - I’d be out #SASAustralia

I can do one pushup. I'd probably die doing this #SASAustralia

I canto believe how easy they can leave. They should go into isolation for couple hours to think bout it #SASAustralia

The honey badger gonna give Schapelle Corby a rose #SASAustralia

I knew nothing about Sabrina before this show but she is BLOODY IMPRESSIVE. Big fan #SASAustralia

I don’t know who Sabrina Frederick is, but her poster should be on the bedroom walls of girls around Australia. She is a gun! #SASAustralia

I'd probably last about 47 seconds but I'd deadset have a crack at #SASAustralia.

Mum asked me if I did similar to this when I was in the Army. I said nah it was tougher, heavier packs, more swearing, occasional motivational boots to the ribs from Sgts or Cpls.
Anyway she's traumatised now so I shouldn't have told her that.#SASAustralia

Can’t get enough of this show. What is it about a British potty mouth that makes such good television? #SASAustralia https://t.co/1KmETZf4ho

Oh got to wait till Monday... #SASAustralia

Until the next episode. We can't wait!