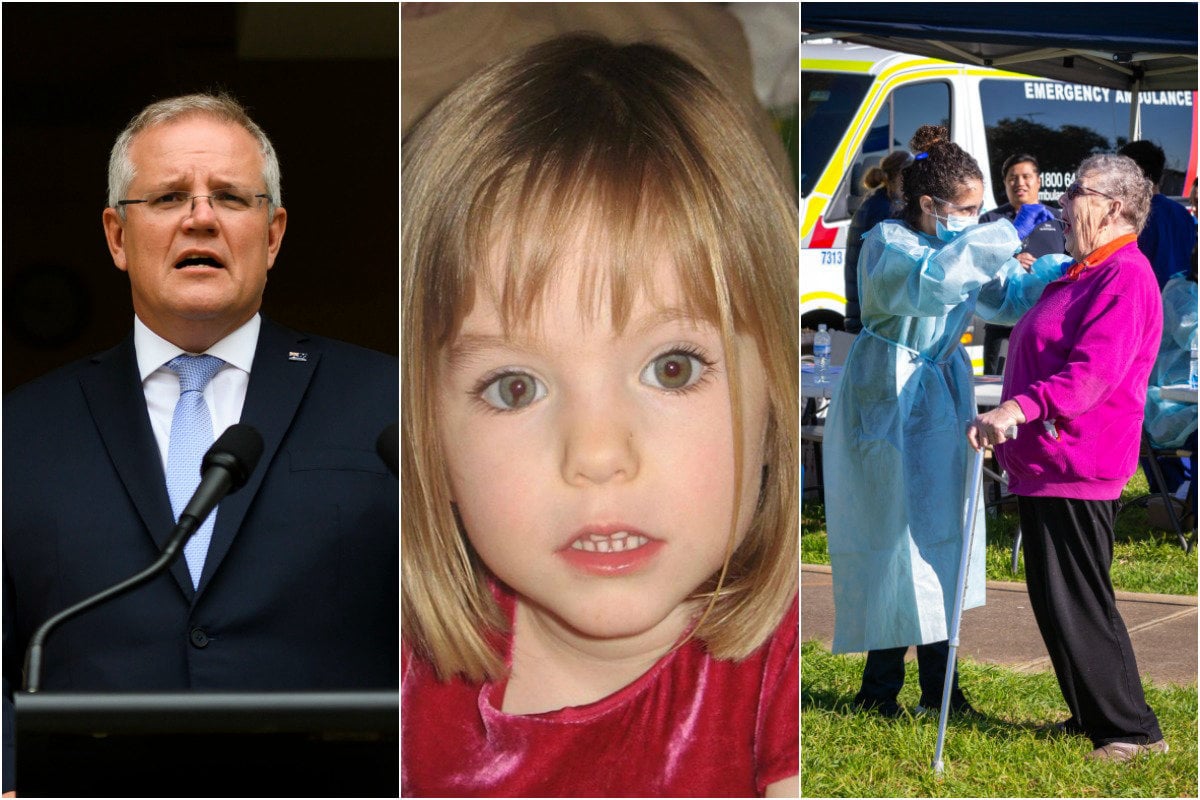 Victoria has recorded double-digit increases in new COVID-19 infections for 12 days running, culminating in 90 new cases over the weekend.

There were 41 new cases on Saturday and 49 on Sunday, the highest daily number for the state since April 2. The majority were locally acquired.

The latest figures contrast with Western Australia, which had one new case, and NSW with three - all people returning from overseas.

Queensland and South Australia had no new cases.

A religious feast that broke restrictions during Victoria’s strict coronavirus lockdown has been revealed to be behind one of Melbourne’s biggest family clusters. It occurred despite a campaign to warn multicultural communities of the virus. https://t.co/PbG8NnstoG

Professor Kidd said the growing number of cases in Victoria was "of genuine concern" but maintained the commonwealth government fully supported the way the outbreak is being handled.

"This is not a second wave," he told reporters in Canberra on Sunday.

"What we're seeing in Victoria is exactly what was planned when we have outbreaks occurring across the country."

The Victorian government is conducting a testing blitz in an attempt to prevent further spread of the virus, which prioritised the suburbs of Broadmeadows and Keilor Downs at the weekend. About 40,000 people have been tested since Friday. 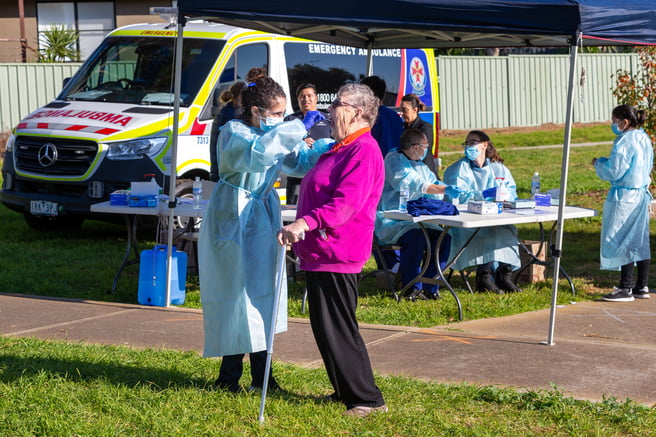 A woman is tested at a pop-up clinic in Broadmeadows. Image: Asanka Ratnayake/Getty.

A new world first coronavirus test, a less invasive saliva test, developed by scientists at the Doherty Institute, is being fast-tracked to the hotspots.

It’s hoped saliva testing will be less invasive for children, elderly people and other Victorians who could not previously have been tested.

Over the weekend, Victorian Premier Daniel Andrews confirmed health authorities are considering putting the worst-hit suburbs in lockdown, after dozens of new cases were recorded.

Institutions refusing to join the National Redress Scheme are "doubling down" on the crime of child sexual abuse, Prime Minister Scott Morrison says.

Mr Morrison and Social Services Minister Anne Ruston have warned institutions they may lose funding and tax concessions if they fail to sign up by tomorrow's deadline, and they will be named and shamed. 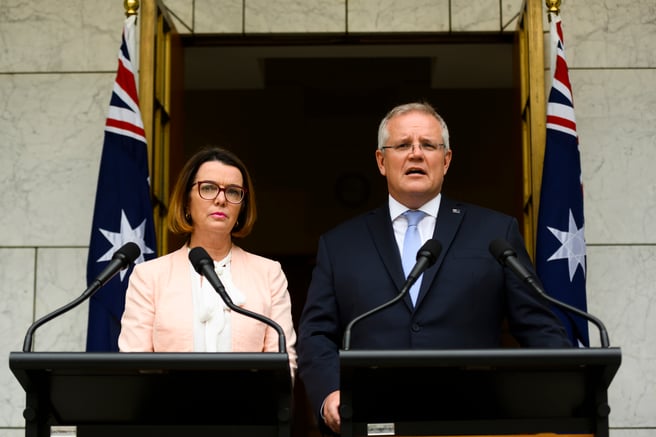 Scott Morrison and Anne Ruston have warned the 25 institutions who have failed to sign up, there will be consequences. Image: Getty/Rohan Thomson.

"We consider it to be reprehensible that you have failed to sign up to the scheme."

The Jehovah's Witnesses is among the organisations that has refused to sign up, arguing it does not have the institutional settings of other faith-based institutions that the redress scheme is designed to cover.

READ: 1800 victims and no justice: Inside the Jehovah's Witnesses' alleged history of child sexual abuse.

Senator Ruston is set to name the non-participating institutions on Wednesday, when she will announce what action the federal government will take against them.

Those 25 institutions, which were either named in redress applications or the child abuse royal commission, are holding up claims from 103 survivors.

In an interview with 60 Minutes, German prosecutor Hans Christian Wolters said his team concluded that missing British toddler Madeleine McCann was no longer alive some time in the last two years.

43-year-old Christian Brückner, a convicted rapist currently in prison, has been named as the prime suspect in the little girl's disappearance in Portugal in 2007.

German prosecutor Hans Christian Wolters leads the investigation into Christian Brückner. He tells #60Mins reporter Liz Hayes that it was sometime in the last two years when they realised Madeline McCann was dead. pic.twitter.com/xMDEAIpeNh

"We have strong evidence that Madeleine McCann is dead and that our suspect killed her," Wolters told 60 Minutes.

"We don't have the body and no parts of the body, but we have enough evidence to say our suspect killed Madeleine McCann."

Wolters kept the new pieces of evidence close to his chest, and Brückner is yet to be charged with anything.

READ: A “horrible job to do” and terrified exes: What we know about the Madeleine McCann suspect Christian Brueckner.

When Ian McBeth, Paul Hudson and Rick DeMorgan's air tanker crashed and killed them near Cooma, south of Canberra, during the summer's bushfires, the Two Thumbs Wildlife Trust sanctuary was under threat.

"They actually dropped retardant on my sanctuary and then crashed into the ground," owner James Fitzgerald told 9News.

Six months on from the three US pilots' deaths, the broadcaster has reported Mr Fitzgerald has named three surviving koalas after them in tribute.

#EXCLUSIVE: It was one of the most heartbreaking days of the bushfires, three American firefighters killed when their Hercules air tanker crashed in southern NSW. They were trying to save a koala sanctuary. The devastated owner is now honouring the heroes. #9News pic.twitter.com/2CCjQlj3CI

The sanctuary owner also donated $100,000 in the pilots' names to koala research being conducted through the Australian National University.

Mr Fitzgerald says the wives and children of the three men met the koalas while in Australia, and they ask him regularly for photos and updates.

267 per cent rise in cases, as US considers going back into lockdown.

California has ordered some bars to close as the state, and a dozen others in the US, face the worst surge in coronavirus cases since the start of the pandemic.

Bars in seven counties, including Los Angeles, must close, and those in eight more counties are strongly recommended to shut their doors ahead of Fourth of July celebrations.

For a third consecutive day on Saturday, the number of confirmed US cases rose by more than 40,000, one of the largest surges in the world.

The coronavirus is not under control: America’s shifting Covid-19 epidemic in five charts https://t.co/hhJoOhNqTI pic.twitter.com/Ad5ZJZXHSx

In Arizona, cases have risen by 267 per cent so far in June, and jumped by a record 3857 cases on Sunday, the eighth record-breaking increase this month.

Even in states where cases have been declining for weeks, outbreaks are happening.

One bar in Michigan, has been linked to more than 85 cases.

- More than 10 million COVID-19 cases have now been recorded around the world, with half a million killed by it in just seven months.

- The UK remains "on a knife edge" a scientist has warned, as the country prepares to reopen pubs and restaurants next month.

- President Trump has deleted a video he posted on Twitter that showed a supporter yelling the offensive and racist slogan "white power".