Ruth Bader Ginsburg, the US Supreme Court Justice who established herself as a trailblazer for women's rights, died from complications with pancreatic cancer on Friday at the age of 87.

Her husband, Martin Ginsburg, passed away ten years prior, also from cancer.

In the wake of Ruth Bader Ginsburg's death, her supporters are remembering her incredible life, including her love story.

Ruth Bader Ginsburg’s husband, Marty, was her best friend. The pair met at Cornell University in the early 1950s, when Ruth was just 17 years old.

Speaking of their meeting in 2016, Ruth Bader Ginsburg told NPR: "Marty Ginsburg was the first boy I met who cared that I had a brain."

In July, 1954, a month after she graduated with a Bachelor of Arts, Ruth and Marty married.

They moved to Fort Sill, Oklahoma, where Marty was stationed as an officer in the Army Reserve after he was called up for active duty.

The next year, Ruth gave birth to the couple’s first child, a daughter named Jane.

In the autumn of 1956, Ruth enrolled in Harvard Law School. She was one of nine women in a class of around 500. One day the Dean of Harvard Law asked Ginsburg, along with the rest of the female law students, “How do you justify taking a spot from a qualified man?”

Undeterred, Ruth continued to study hard and she eventually made it onto the prestigious Harvard Law Review.

Later, Ruth would transfer to Columbia Law School and become the first woman to be on both the Harvard Law Review and the Columbia Law Review. Eventually, she become one of the most powerful and esteemed women in the United States.

But her early life wasn’t all smooth-sailing. 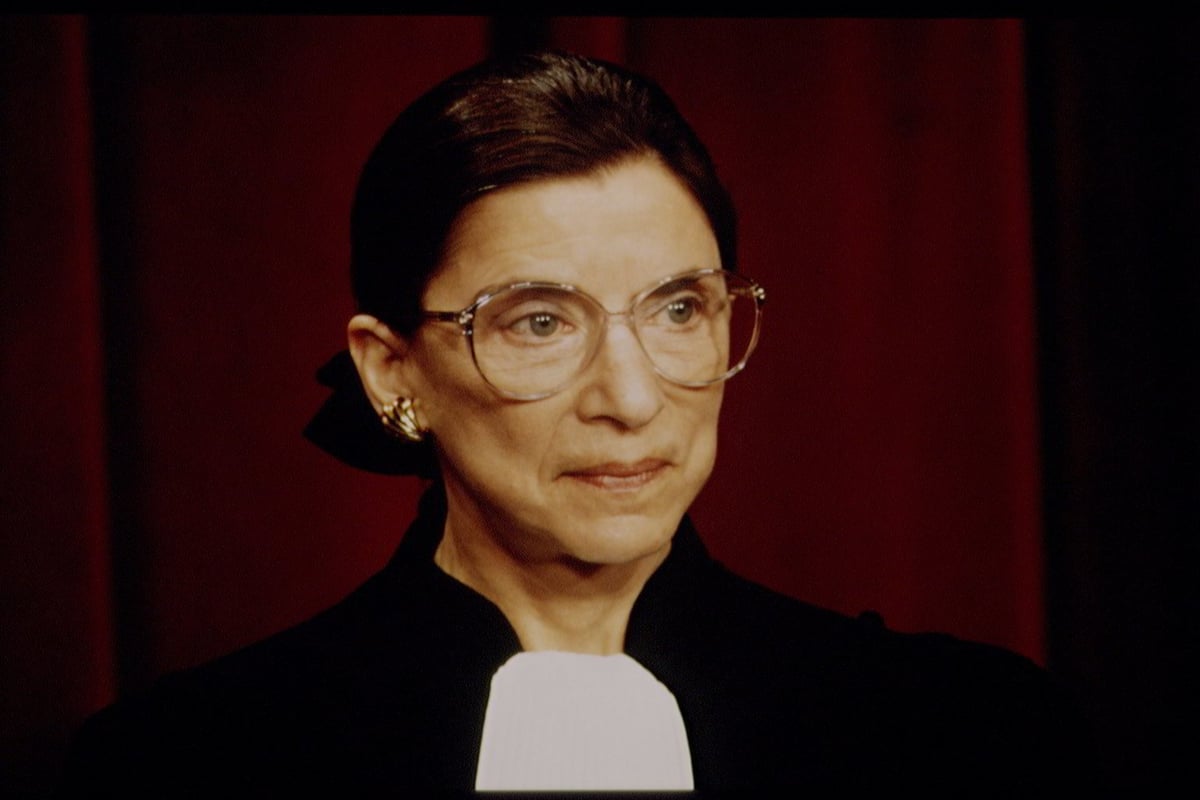 While Ruth and Marty were both studying at Harvard, Marty was diagnosed with testicular cancer.

During this time, Ginsburg attended class for both of them. She took notes for both her own classes and Marty’s, typed up her husband’s dictated papers, and cared for her young daughter and sick husband – all while making it onto the Harvard Law Review.

Marty eventually went into remission and the couple went on to have a son together in 1965, who they named James.

Marty would work for a New York law firm and Ruth turned to academia, before being appointed to the US Court of Appeals.

Over the years, Marty’s career took a backseat as Ruth’s soared.

She spoke at length about how her husband's support meant she was able to pursue her career aspirations.

“Women will only have true equality when men share with them the responsibility of bringing up the next generation,” she once told ABC correspondent Lynn Sherr.

On August 10, 1993, Ruth was appointed as an Associate Justice of the Supreme Court of the United States by President Bill Clinton. She was the second female justice to ever be confirmed by the court.

Before her arrival, the Supreme Court wives would meet three times a year in what used to be called the Ladies Dining Lounge.

After Ruth arrived on the scene, the court conceded that things were changing. In 1997, the room was renamed the Natalie Cornell Rehnquist Dining Room, after the chief justice’s late wife.

Marty would join the rest of the wives and husbands for regular social events, including Justice Sandra Day O’Connor’s husband, John. 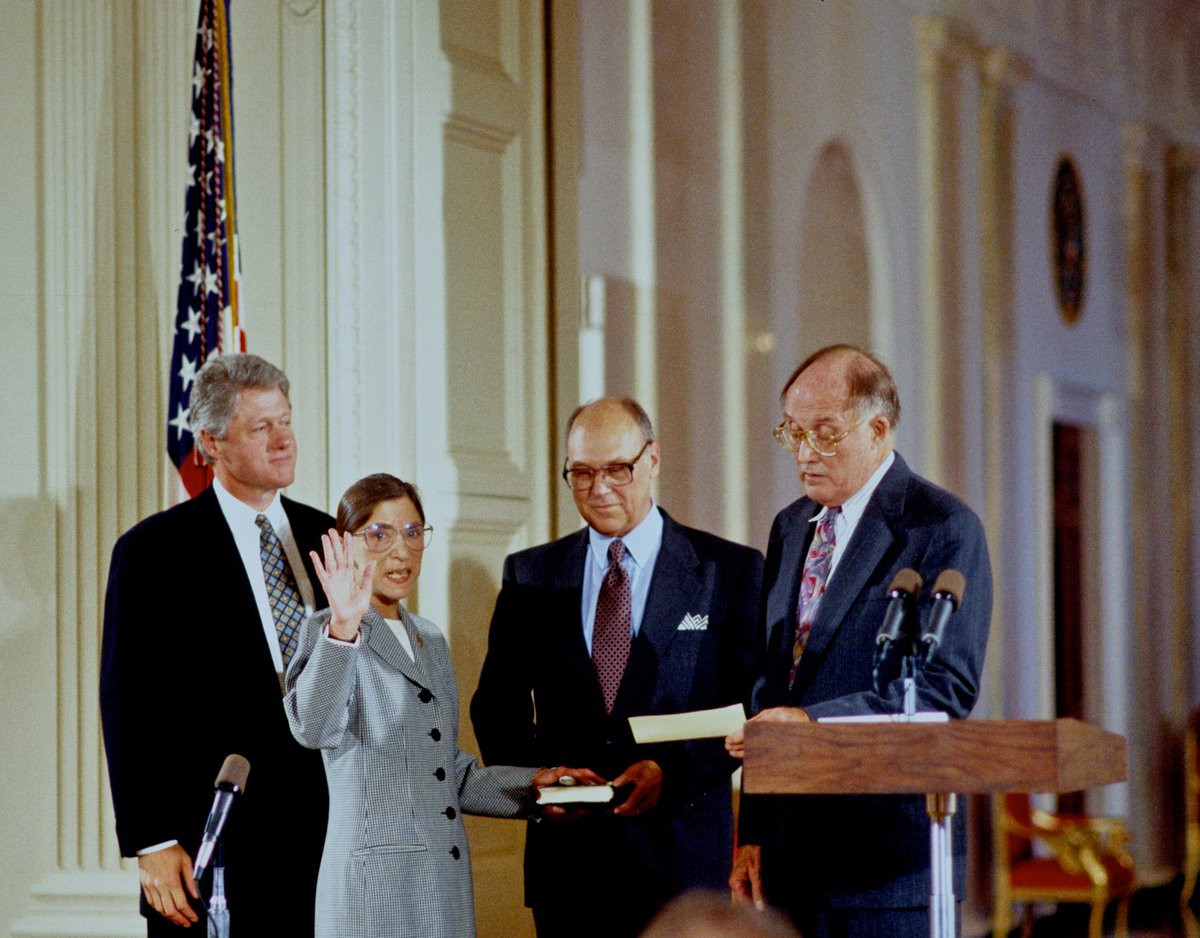 Ruth Bader Ginsberg is sworn in as Associate Justice of the Supreme Court of the United States in 1993. President Bill Clinton stands behind her while her husband Martin holds the bible, as Chief Justice William H. Rehnquist adminsters the Oath of Office. Image: Getty.

In their book, Notorious RBG – The Life and Times of Ruth Bader Ginsburg, authors Irin Carmon and Shana Knizhnik recalled how John and Marty used to joke that they were members of the Dennis Thatcher Society.

Marty described the club as having a wife with “a job which deep in your heart you wish you had”.

“Now let me just say that in my case it is not true. Only because I really don’t like work. She works like fury all the time. The country’s better off as it is,” he added.

Later when John O’Connor was diagnosed with Alzheimer’s and Justice O’Connor retired, Marty became the only male member of the group – which he loved.

“Marty liked being a spouse,” one wife wrote in Chef Supreme, a cookbook of Marty’s greatest hits put out by the Supreme Court Historical Society.

“I remember being surprised when I realised his dishes weren’t catered.”

He was known for his baking and big heart.

On each clerk’s birthday, he would bake a cake – almond or chocolate, or sometimes ginger or lemon – which Ruth would take into them.

Many have said that Marty showed a human side to Ruth.

Heather Elliott, one of the clerks, recalled a night when Ruth was working late in the chambers, as Marty quietly read.

“I started to talk to her about the research I had done, and while I was talking, Marty got up and walked toward us. I started freaking out in my mind – ‘Is what I am saying that stupid? What is he coming over here for?!’ – only to watch him come up to RBG, fix her collar (which had somehow fallen into disarray), and then go back to his book. The comfortable intimacy of that moment was something I will always remember.”

Ruth would later tell the authors that Marty was her “best friend”.

That friendship and support was vital when, in 1999, Ruth faced her own health battle. She was diagnosed with colon cancer, and although she underwent surgery and then chemotherapy and radiation, she never missed a day on the bench.

She would later go into remission and the couple would have 11 more years together, celebrating their 56th wedding anniversary on June 23, 2010.

Before Marty's last trip to the hospital, Ruth found a letter he had scribbled on a yellow legal pad. It read:

You are the only person I have loved in my life, setting aside, a bit, parents and kids and their kids, and I have admired and loved you almost since the day we first met at Cornell some 56 years ago. What a treat it has been to watch you progress to the very top of the legal world!!

I will be in JH Medical Center until Friday, June 25, I believe, and between then and now I shall think hard on my remaining health and life, and whether on balance the time has come for me to tough it out or to take leave of life because the loss of quality now simply overwhelms. I hope you will support where I come out, but I understand you may not. I will not love you a jot less.

Ginsberg went on to live another ten years, before her passing this week.

During her time as a Supreme Court Justice, Ruth was instrumental in bringing about laws to promote gender equality, to put an end to gender discrimination, and to improve women's rights when it comes to abortion.

The outspoken and fierce associate justice inspired everything from memes to one of Kate McKinnon's most popular impressions on Saturday Night Live.

Ginsburg is survived by her daughter Jane C. Ginsburg and her son James Steven Ginsburg.

What a life she has lead.

What a lovely story. I hope (though it may be unlikely) that Dean Of Harvard Law saw her success and ate his words.