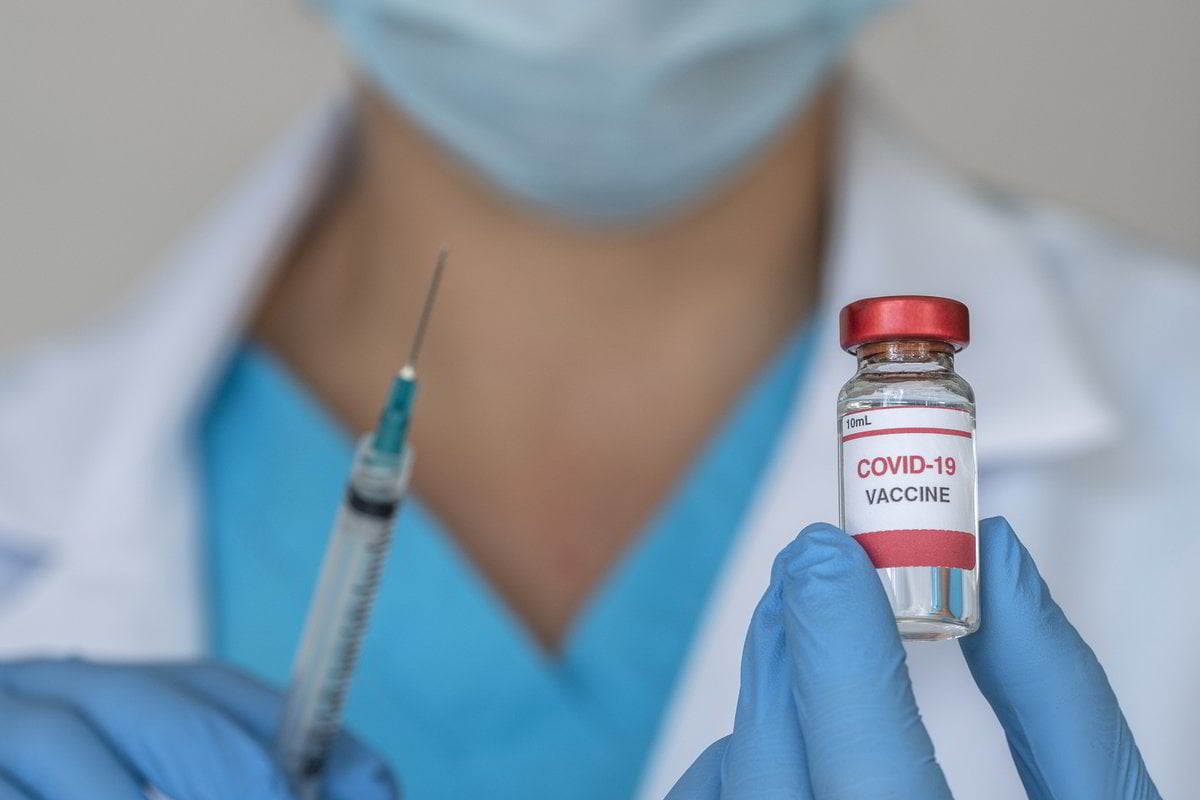 It was the announcement we had all been waiting for.

After months of lockdowns, the closing of borders, and social distancing, we finally had promising news about a COVID-19 vaccine.

But when the news was announced, it wasn't exactly the reaction we were expecting.

Instead of rejoicing in the streets, the news in August of Russia's Sputnik V COVID-19 vaccine came with a side of... skepticism. And now, just this week, 26 scientists - most of whom work at universities in Italy - have signed an open letter questioning the reliability of the data presented in the early stage trial results of the Russian COVID-19 vaccine, Sputnik-V.

Talking about vaccination can be tricky, but here's how you can respond to five of the most common questions. Post continues below.

The news was first announced in early August when Russian President Vladimir Putin confirmed that the nation had become the first in the world to begin the manufacturing stage of a coronavirus vaccine, describing it as "a very important step for the world".

In the announcement, Putin claimed that the vaccine works "quite effectively" and "forms a stable immunity" against COVID-19.

He also stated that one of his daughters had already received the vaccine, sharing: "She's feeling well and has a high number of antibodies."

Here's what we know about the latest developments in the race for the COVID-19 vaccine.

This week it was announced that late-stage trials of the AstraZeneca-Oxford University vaccine were paused after one person became ill, reportedly suffering from neurological symptoms associated with a rare spinal inflammatory disorder.

AstraZeneca on Wednesday said a final diagnosis was still pending as more tests were carried out.

The news follows reports the United States is aiming for fast-track authorisation or approval of a vaccine before November's presidential election.

However, leading US and European vaccine developers on Tuesday pledged to uphold scientific safety and efficacy standards for their experimental vaccines and not bow to political pressures to rush the process.

AstraZeneca has already agreed to supply close to three billion doses to governments across the globe - more than any other vaccine project.

Australian Health Minister Greg Hunt says he is confident the pause will not delay Australia accessing the drug.

How did Russia get a vaccine so quickly?

Amid the news of Russia's vaccine, many experts have questioned the safety and effectiveness of Sputnik V.

The approval of the vaccine comes before trials that would normally involve thousands of participants across multiple months, commonly known as Phase III.

Although scientists in Russia have conducted months of human trials, Phase III trials are usually considered essential precursors for a vaccine to secure regulatory approval.

But instead of doing Phase III trials, Russia is going straight into administering it.

Russia's health minister has said a vaccination plan is expected to be launched in October.

So, why are experts concerned about Russia skipping Stage III testing?

"The reason that vaccination is such a success globally, and has been for the last few decades, is because we're very careful with how we trial the vaccines before we introduce them to a global or larger population," Dr Sanjaya Senanayake, Infectious Diseases Specialist, told Mamamia's daily news podcast, The Quicky.

"If it does have some side effects, we will see start seeing it if it's administered to large populations," he added.

How many vaccines are in Phase III around the world?

Although Russia is the first country to start production of a coronavirus vaccine, other countries are still powering ahead with vaccine development.

"There are about 165 vaccine candidates, and of those about eight of them are in Phase III trials," Dr Senanayake told The Quicky.

"The best known [COVID-19 vaccine] is the Oxford trial, but there are a few others as well."

How does the Sputnik V vaccine actually work?

Russia's Sputnik V vaccine is based on the DNA of an adenovirus, which is a common cold virus.

"What the Russian vaccine does, and the Oxford one does is that it takes a harmless virus and puts the genetic information for the production of the coronavirus spike protein into it," Dr Senanayake explained.

"So when the adenovirus infects the human cells, when the vaccine is given, those cells start producing and pumping out the spike protein, which leads to an anti-body response.

"But of course, that's just one way of doing it. The wonderful thing about having 160 odd vaccine candidates is that they're using different methods of stimulating the immunity."

When could we see a vaccine in Australia?

The federal government has a deal for 34 million doses of the AstraZeneca-Oxford University vaccine to be distributed next year if trials succeed.

Federal Health Minister Greg Hunt said the pharmaceutical giant had assured him there was no change to the timetable of delivering the vaccine despite the pause in production.

"They have no belief that it will be changed in terms of its nature, form or delivery but they are always subject to the medical advice," he told reporters on Thursday.

Hunt said the trial was also stopped two months ago to review an adverse reaction which experts found had no link to the vaccine.

Speaking to The Quicky, Dr Senanayake explained that Australia is in a good position when it comes to a COVID-19 vaccine.

"We're in a very good position compared to other parts of the world in terms of introducing a new vaccine for COVID-19 and distributing it and monitoring it to check how safe it is," he said.

"The earliest that we might see a vaccine – the Moderna US vaccine and the Oxford vaccine – they've talked about having their Phase III trial results by the end of the year," he added.

"I wonder if that's a bit optimistic... but if they work and if we're in a position to acquire some of the vaccines, it may be around mid 2021 that we might start to see some groups within Australia getting the vaccine."

Are we on the right track to have a vaccine sooner rather than later?

"The World Health Organisation are being very cautious and sending out messages like, 'We may not get a vaccine.' The reason they're saying that is because the fastest time to develop a vaccine prior to this, from start to finish, was four years with the Mumps vaccine," Dr Senanayake explained.

"We've also never had a vaccine for a coronavirus before. Plus, out of all vaccines that are developed, only about 10 per cent are ever successful.

"So if you look at those factors, it does lead to a degree of pessimism but you have to balance that with the fact that our technology has never been better, and we've never had such a level of cooperation by so many groups around the world to try to get this vaccine developed.

"I'm more optimistic than pessimistic that we will have a functioning COVID-19 vaccine."

This article was originally published on August 18 and was updated on September 10.

Reply
Upvote
If and when a suitable vaccine is available, I will get it.  However, having just watched the movie, I am Legend,  there are two countries whose vaccines I would rather not risk
B
be_amazed 2 years ago

Reply
Upvote
@guest2 you're basing this decision on a fictional movie...?
G
guest2 2 years ago

Reply
Upvote
@be_amazed It was a tongue in cheek comment.  However, there are people (health professionals included and not just anti -vaxxers)  who are concerned about long and short term side effects of any coronavirus vaccine, given that most vaccines take years to develop.  Apparently, the vaccine (given to volunteers) has caused high fevers and headaches; the worry being that if the immediate side effects are too severe, young people (who generally have mild symptoms when infected with coronavirus) won't get the vaccine.
C
cat 2 years ago

Reply
Upvote
@guest2 young people want this pandemic to be over as much as anyone else. Sure, we are less likely to die of the virus, but we are sick of lockdowns, uncertainty, severe mental health impacts and seeing our chance of having any financial stability disappear. We also actually care that our parents and grandparents don’t die, and don’t want to pass the virus to anyone. A headache isn’t going to out weigh all that. In fact young people all over the world are volunteering for vaccine trials since we know we’re the least vulnerable.
Based on the reaction to masks, and vaccines in general, it’s the slightly-older people who are likely to refuse a vaccine. Can’t wait to hear Andrew Bolt’s take on it.
G
guest2 2 years ago

Reply
Upvote
@cat my comment about young people not wanting the vaccine was based on what the researchers themselves stated.   I think many people, whilst not against a vaccine, do have reservations about the unknown long term side effects, given the short time frame in which the vaccine has been developed.  Even the relatively benign flu vaccine has caused Guillian Barre syndrome (albeit quite rare) and only has a 60% efficacy.  As for the side effects, apparently they were quite severe in many of the volunteers and were much greater than actual Coronavirus symptoms that young people experienced.
News
General
Opinion
True Crime
Politics
Sport
Explainer
Entertainment
Celebrity
Reality TV
Movies
TV
Books
Rogue
Royal
Lifestyle
Beauty
Fashion
Weddings
Home
Wellness
Health
Fitness
Travel
Food
Parents
Before The Bump
Pregnancy
Baby
Kids
Teens
School
Parent Opinion
Work & Money
Money
Finance
Career
Lady Startup
Relationships
Sex
Dating
Separation
Friendship
Family
Real Life
Couples