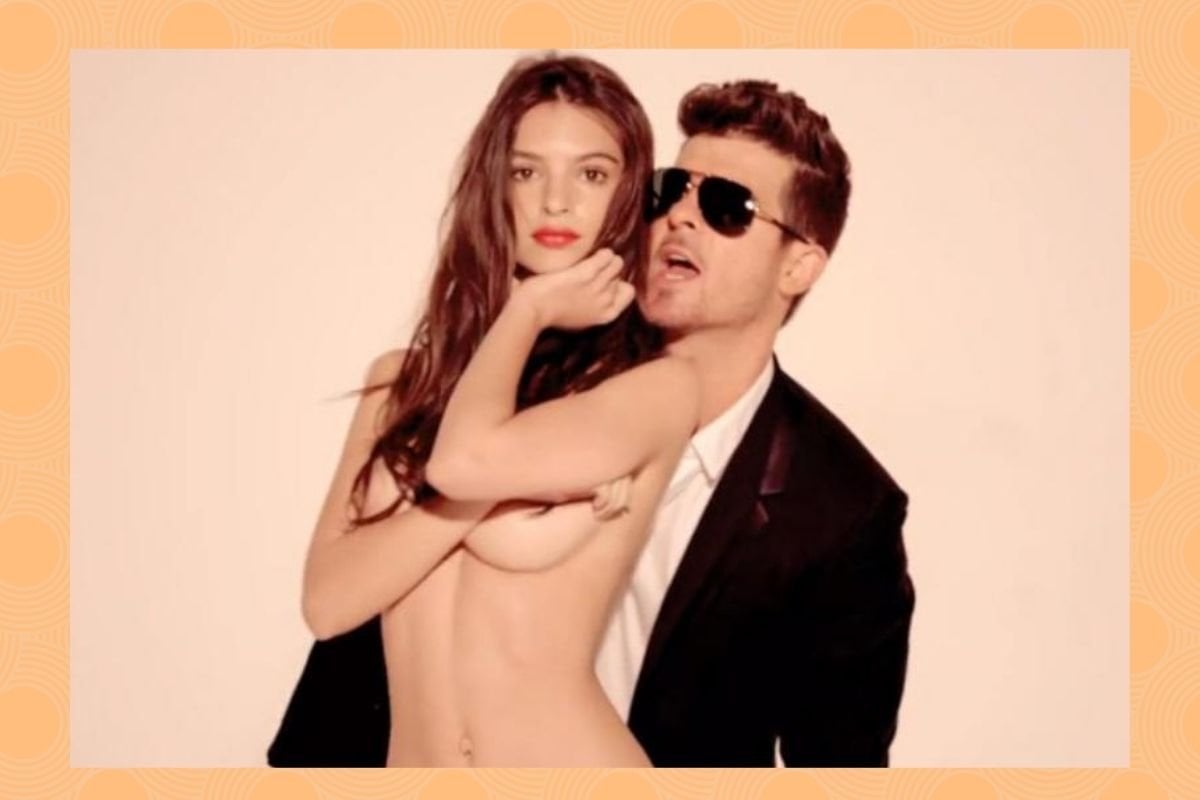 This post discusses sexual assault and could be triggering for some readers.

The video for the Robin Thicke song 'Blurred Lines' introduced the world to Emily Ratajkowski.

Eight years, and a lot of controversy later thanks to accusations it glorified rape culture, the now 30-year-old has made some allegations of her own.

In her new autobiography, My Body, Ratajkowski alleges that Thicke, sexually assaulted her while she was on set for the video.

"I instinctively moved away, looking back at Robin Thicke. He smiled a goofy grin and stumbled backward, his eyes concealed behind his sunglasses. My head turned to the darkness beyond the set."

She says Thicke's actions made her feel "naked for the first time that day" but she'd been "desperate to minimise" the incident.

"I pushed my chin forward and shrugged, avoiding eye contact, feeling the heat of humiliation pump through my body. I didn’t react – not really, not like I should have."

The video’s director, Diane Martel, has told The Sunday Times she witnessed the assault and screamed at Thicke, "What the fuck are you doing, that’s it! The shoot is over!"

"I remember the moment that he grabbed her breasts. One in each hand. He was standing behind her as they were both in profile," she said.

She explained that up until that point, “everything had been very sweet and enjoyable" and the women were comfortable. No men aside from the performers were allowed on set.

She remembers Thicke "sheepishly" apologising, before the shoot continued.

Both Martel and Ratajkowski said he was drunk during the shoot which also featured T.I. and Pharrell Williams, alongside Ratajkowski, Elle Evans, and Jessi M'Bengue. 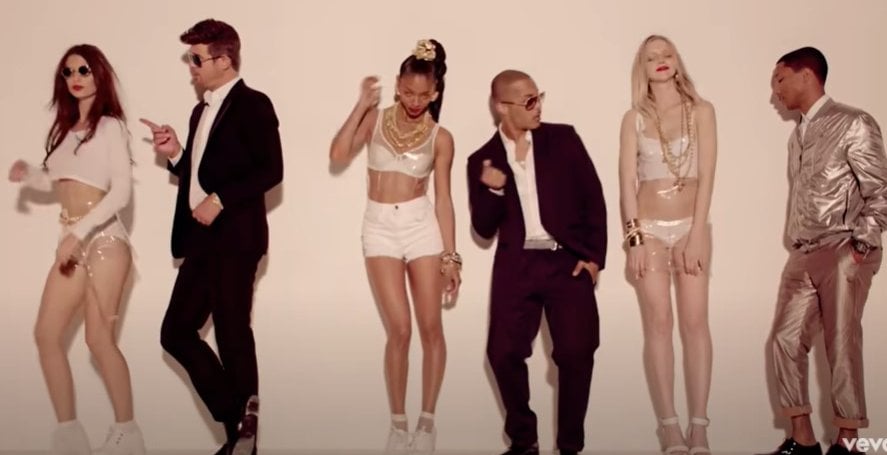 Ratajkowski has alleged she was sexually assaulted on the set of 'Blurred Lines.' Image: Vevo.

Martel's vision for the video was to subvert power dynamics, placing men in the inferior position as the women ignored and mocked them.

"With that one gesture, Robin Thicke had reminded everyone on set that we women weren’t actually in charge.

"I didn’t have any real power as the naked girl dancing around in his music video. I was nothing more than the hired mannequin," Ratajkowski wrote.

Thicke’s representatives have not responded to a request for comment, according to the Times.

Dubbed the 'most controversial' song of the decade when it was released in 2013, 'Blurred Lines' has been banned across numerous venues including nightclubs and university campuses.

The song's lyrics tell the listener that sexual consent is a grey area with lines like:

It spent 33 weeks on the top of the Billboard Top 100 and garnered Thicke a Grammy nomination as a solo performer. But the backlash was also widespread.

As Emily Bootle articulated for The News Statesman, "It can be difficult to articulate why these songs are more offensive than other sexually arrogant pop songs. For me, it comes down to a lack of female agency. The woman’s desires are assumed, her consent expected. Of course, pop can still be grossly misogynistic without doing this."

The same year it was released, an online photo essay exhibit called Project Unbreakable featuring women and men holding signs with sentences that their rapist said before, during, or after their assault, made headlines. It perfectly articulated what critics of the song had been trying to explain placing the song's lyrics into a real-life context. 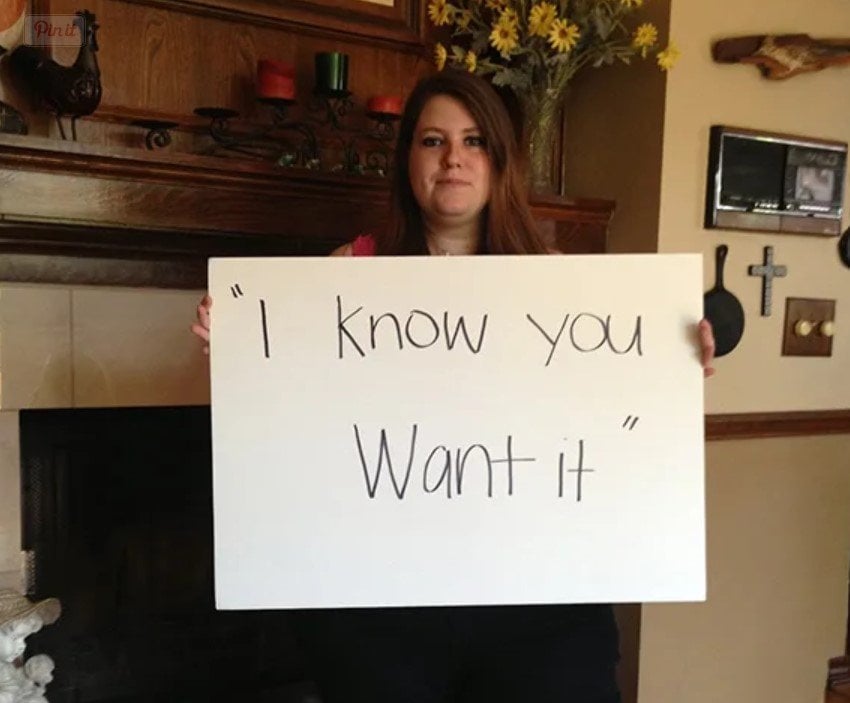 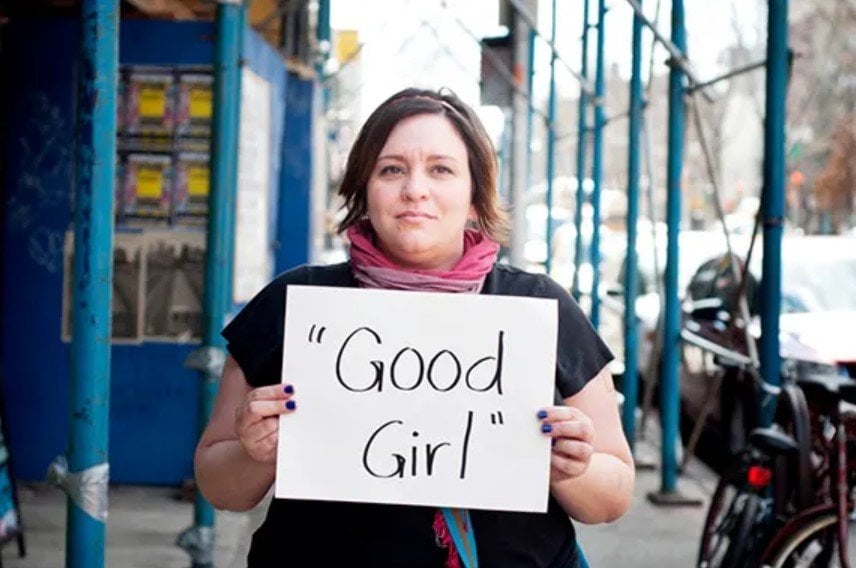 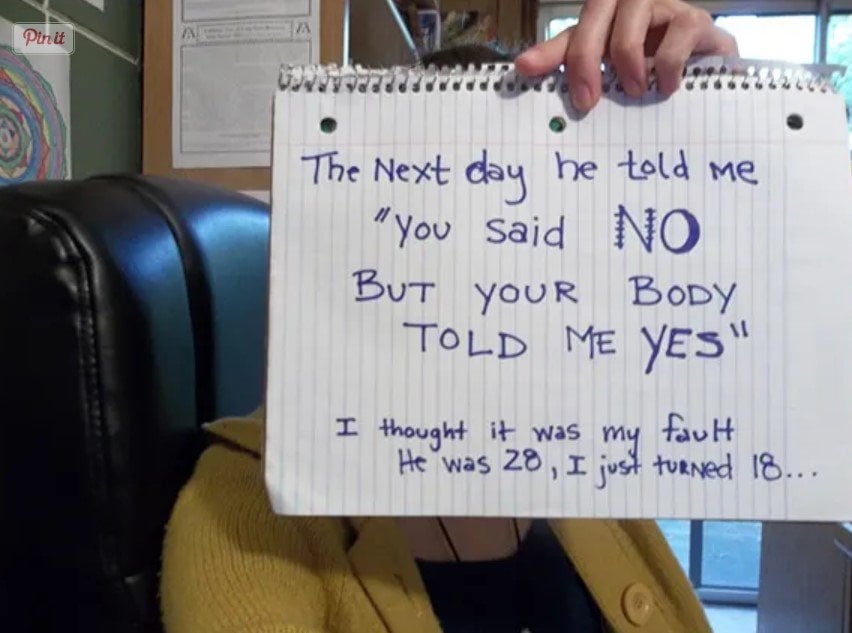 At the time, Thicke told GQ Magazine, "We tried to do everything that was taboo. Bestiality, drug injections, and everything that is completely derogatory towards women. Because all three of us are happily married with children, we were like, 'We’re the perfect guys to make fun of this.'

"People say, ‘Hey, do you think this is degrading to women?’ I’m like, ‘Of course it is. What a pleasure it is to degrade a woman'. I’ve never gotten to do that before. I’ve always respected women."

When asked directly by the BBC what he thought about critics who said the song promotes rape, he replied "I think they should all...I can’t dignify that with a response. That’s ridiculous."

Williams, who was also in the video defended it to Pitchfork saying critics, "just want to be mad."

He's since changed his tune, telling GQ in 2019, "I realised that there are men who use that same language when taking advantage of a woman, and it doesn't matter that that's not my behaviour. Or the way I think about things. It just matters how it affects women. And I was like, Got it. I get it. Cool. My mind opened up to what was actually being said in the song and how it could make someone feel."

Earlier this year, Thicke told the New York Post, "We had no negative intentions when we made the record, when we made the video. But then it did open up a conversation that needed to be had. And it doesn’t matter what your intentions were when you wrote the song … the people were being negatively affected by it. And I think now, obviously, culture, society has moved into a completely different place. You won’t see me making any videos like that ever again!"

In an interview with InStyleUK in 2015, Ratajkowski said 'Blurred Lines' was following her around like a bad, misogynistic smell.

She initially turned down the opportunity, only agreeing after meeting with the director and learning that the video was supposed to be more playful than sensual.

The song has also been embroiled in a copyright lawsuit after Marvin Gaye's family alleged it ripped off his 1977 hit 'Got To Give It Up'. They won, and his estate was awarded $5 million.

Ratajkowski's autobiography is due to be released on October 19 and promises 'a deeply honest investigation of what it means to be a woman and a commodity.'

Reply
Upvote
And just so ironic - video about women using their sexuality to dominate men when really the whole thing is men abusing women's sexuality to dominate women. In the video by objectification and emphasising the trickery and then in real life by assaulting her when she had very little recourse.
M
mamamia-user-482898552 3 months ago

Reply
Upvote
@katp They might sat that was the intent of the video, but it certainly failed to convey that message. It's basically just a T&A show with a catchy tune.
K
katp 4 months ago

Reply
Upvote
2 upvotes
"I didn’t have any real power as the naked girl dancing around in his music video. I was nothing more than the hired mannequin," Ratajkowski wrote.
How much power can a naked woman have amongst fully clothed men? I find it hard to see how they have any.
M
mamamia-user-482898552 4 months ago

Reply
Upvote
6 upvotes
@katp Agree. Quite aside from the real subject of this article (sexual assault is never OK or justified), the old line of it being "empowering" and a "feminist gesture" for women to pose in various states of undress is not something I buy. No matter how much spin is applied, this is always done for the male gaze. Being a sexualised commodity isn't an act of feminism.
K
katp 4 months ago

Reply
Upvote
3 upvotes
@mamamia-user-482898552 agreed. I think it might be momentarily, individually a good feeling to be desirable but it does nothing to advance the place of women as a whole and I'd say it contributes to quite the opposite.
C
cat 4 months ago

Reply
Upvote
@katp her point is that the song implies women use their sexuality to dominate men. Shes not saying thats actually the case.
K
katp 3 months ago