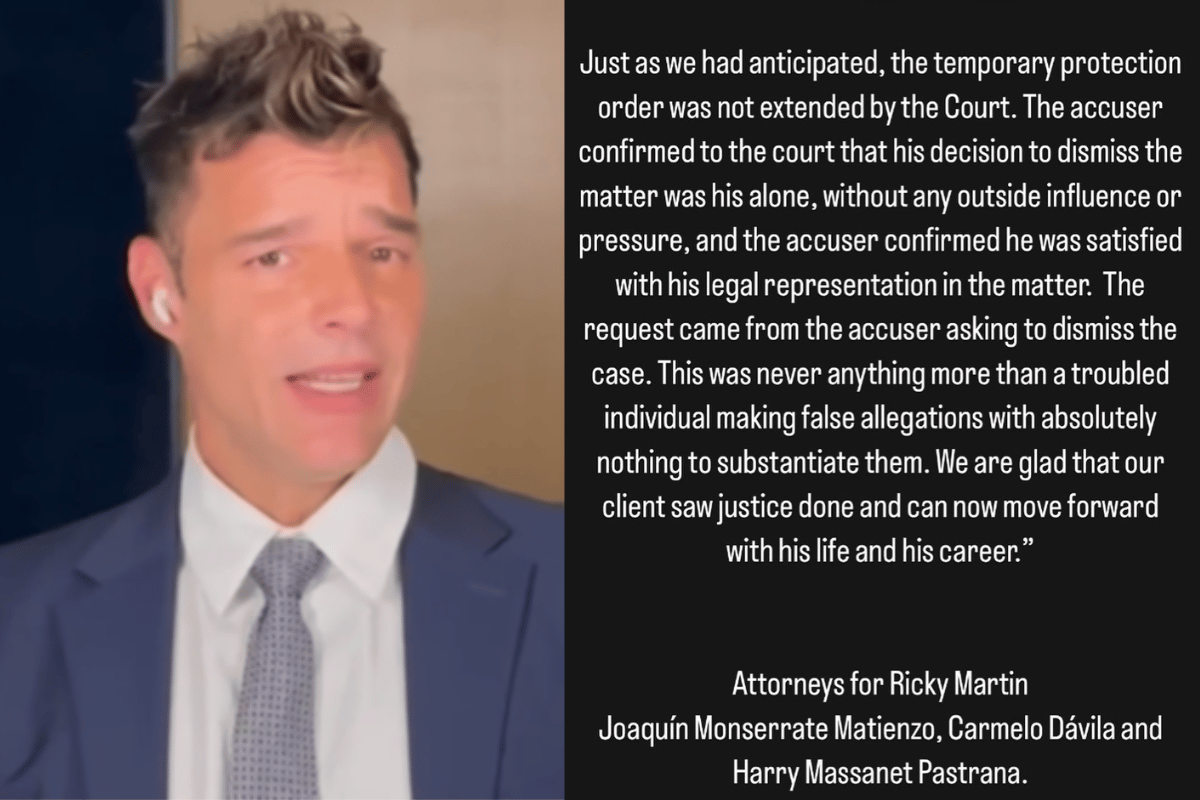 His music, his children, and his sexuality have often been the subject of headlines throughout his career.

But the headlines revolving around Martin and his alleged behaviour over the past few weeks have been much more serious.

Watch Ricky Martin open up about his Barbara Walters interview. Post continues below.

Video via Watch What Happens Live with Andy Cohen.

Then, two days after the lawsuit was filed, Martin was accused of harassment.

The singer's accuser, who was later identified as his 21-year-old nephew, has since withdrawn the allegations.

Here's everything we know about the situation.

On July 1, police attempted to issue Martin with a domestic abuse restraining order in Puerto Rico.

Based on the nature of the case, authorities did not share the petitioner's name.

But on July 13, Martin's brother shared that the accuser was the singer's 21-year-old nephew – the son of Martin's stepsister, Dennis Yadiel Sanchez.

Sanchez alleged he had sustained a romantic relationship with Martin for seven months and "feared for his safety", alleging that Martin had loitered outside his home after the relationship ended.

In response, Martin's attorney said the allegations were untrue.

"Unfortunately, the person who made this claim is struggling with deep mental health challenges. Ricky Martin has, of course, never been – and would never be – involved in any kind of sexual or romantic relationship with his nephew," Marty Singer told People in a statement.

"The idea is not only untrue, it is disgusting. We all hope that this man gets the help he so urgently needs. But, most of all, we look forward to this awful case being dismissed as soon as a judge gets to look at the facts."

Now, one week later, Martin's nephew has dropped the allegations.

In a statement, Martin's attorneys said the court in Puerto Rico did not extend the temporary protection order placed against the 50-year-old singer.

"Just as we had anticipated, the temporary protection order was not extended by the Court," read the statement, which Martin shared on social media.

"This was never anything more than a troubled individual making false allegations with absolutely nothing to substantiate them. We are glad that our client saw justice done and can now move forward with his life and his career."

Martin also released a video statement, which was obtained by TMZ.

"I’m in front of the cameras today because I really need to talk in order for me to start my healing process," Martin said.

"For two weeks, I was not allowed to defend myself because I was following a procedure where the law obligated me not to talk until I was in front of the judge and these claims were proven to be false.

"But I’m going to tell you the truth. It has been so painful. It has been devastating for me, for my family, for my friends. I don’t wish this upon anybody.

"To the person that was claiming this nonsense, I wish him the best – and I wish he finds the help so he can start a new life filled with love and truth and joy – and he doesn’t hurt anybody else.

"Thank you to all my friends. Thank you to all the fans who always believed in me. You have no idea the strength that you gave me with every comment you wrote on social media. I wish you love and light – and here we come with the same strength and passion."