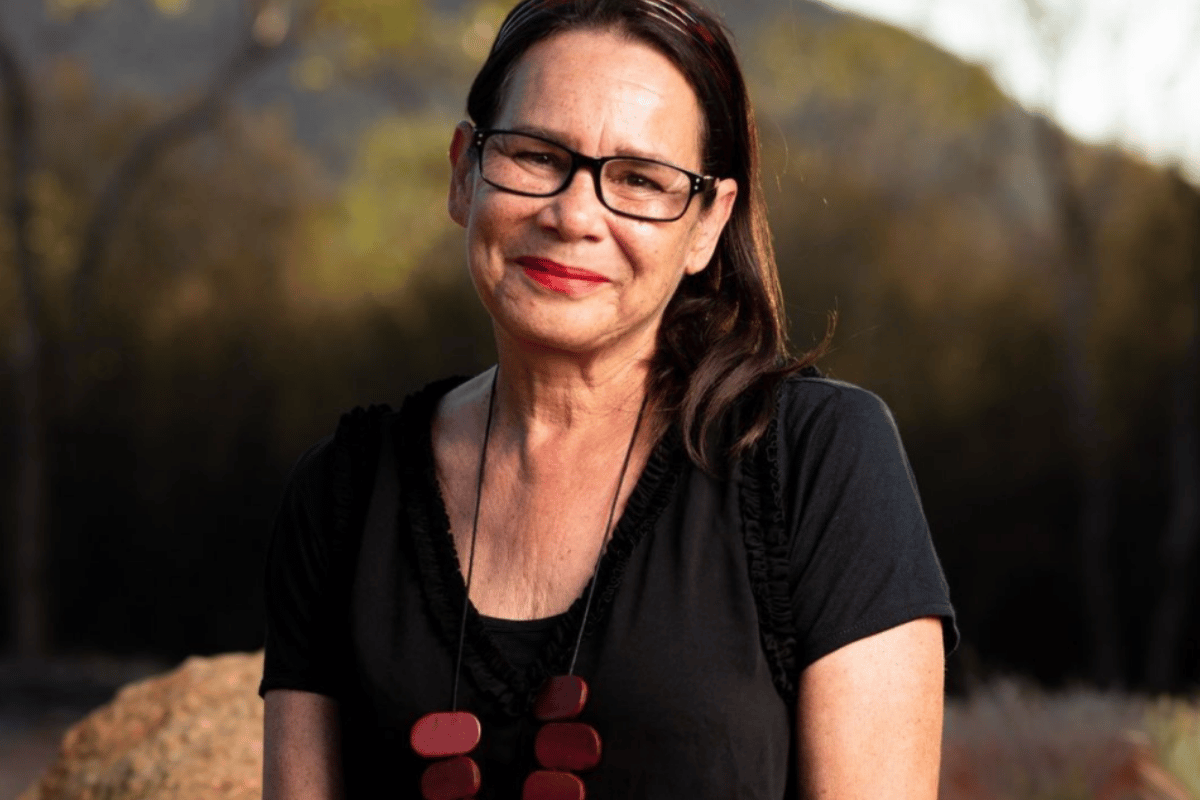 Rhoda Roberts AO is one of the most influential Australians there is.

Rhoda is a Bundjalung woman, a nurse, journalist, broadcaster, actor, producer, writer, art advisor, and artistic director. And she's also responsible for a lot of major cultural moments in Australia, from the Awakening Ceremony during the opening of the Sydney Olympics in 2000 to coining the phrase Welcome to Country.

Amid Rhoda's incredible activism, she's also been through a lot. From systemic racism to a horrific family tragedy that saw her twin sister murdered, Rhoda has experienced countless heartbreak.

On this week's episode of No Filter, Rhoda spoke with the podcast's guest host Narelda Jacobs, and it's a powerful conversation you don't want to miss.

Watch: Changing the date with Narelda Jacobs. Post continues below.

Rhoda was born in 1960 in Northern New South Wales.

The daughter of politically active parents, she grew up in Lismore with brothers Philip and Mark, and twin sister, Lois.

In her very early teens in 1972, Rhoda watched her father Frank Roberts Jnr be introduced by Gough Whitlam at the Tent Embassy on the grounds of Old Parliament House in Canberra, to talk about land rights.

It marked a major moment not only for Indigenous rights across the country, but also for Rhoda and her family.

"I grew up with a fairly strong political lens, in that my dad was part of the Tent Embassy. His biggest thing to us was always to volunteer and give back but he always said to my sister and I, 'the reason you are here, my Bundjalung princesses, is because you are of service to your people'," she shared on No Filter.

Listen to No Filter, Rhoda Roberts: "Now is the time to awaken those sleeping spirits". Post continues after audio.

Reflecting on the positive influence of her father, Rhoda said it was those foundational moments of teaching that led her to where she is today.

"I'm really just the facilitator: I'm surrounded by enormous talent, and the enormous trust of people who trust me with their stories and how I will interpret them in this 21st Century. I think 'listening' in itself has been a great education that my father gave to me."

The barriers Rhoda Roberts has faced.

Growing up in country Northern NSW, Rhoda wasn't allowed into some places simply because of the colour of her skin. The act of simply going to a nightclub or bar, and being turned away by a bouncer: not because of intoxication, but because you are Black.

"We called them the 'colour bars': places in town you couldn't go. But I think the strength I got from those experiences was a strength to question or to walk away. And to look at another way of how do we engage these people that have this fear and terror of us, or just absolute devaluing of who we are," Rhoda noted.

Coming from such a strong and passionate family, Rhoda was brought up with the belief that anything is possible. So when she was denied access to the Lismore Base Hospital as a trainee nurse, Rhoda let the experience fuel her determination.

"The matron told me to go home, assuring me I would never finish my registered nurse training, because 'like all the others', I would end up pregnant. It gave me the strength to go, 'I'll prove you wrong'. And I did."

As both Rhoda and Narelda shared, the impact of continual micro aggressions can be huge.

"Some don't realise how debilitating it can be for our people to constantly hear that we don't have a work ethic, that we're lazy or drunk or we're not pretty. But it is changing, because we're starting to see the visibility, that we are as proud of this nation, as anyone who resides here," Rhoda noted.

Rhoda Roberts on the murder of her twin sister, Lois.

She was spotted standing on the side of the road in Nimbin, Northern NSW, a spot known as hitchhiker's corner.

In a regular week, Lois would hitchhike between her home in Lismore and Nimbin several times, the trip 20 minutes in total. After experiencing a serious car crash at the age of 21, Lois had been left with brain damage, which some say affected her ability to sense danger.

So on that fateful day in 1998, a witness saw Lois get into a white car and sadly she was never seen alive again.

Investigators believe she was held captive and kept alive for around 10 days, during which time she was tortured and sexually abused before being killed.

Then months later in 1999, a bushwalker came across human remains. After forensic testing, it was confirmed it was Lois.

What happened to Lois Roberts? In 1998, Lois was hitchhiking on in Nimbin NSW. A witness saw her get into a white car. Six months after going missing, Lois' body was found in a nearby rainforest. This is a #ColdCase. | True Crime series #ColdJustice is on tonight at 9pm pic.twitter.com/WwkJJCx4lp

"Of course the local police said she's just gone on walkabout. They didn't believe us. It made me think how many Aboriginal lives have been taken with little investigation," Rhoda said on No Filter.

"But the greatest distress for me is the 'why.' The lack of compassion. We lost her in circumstances that are barbaric and brutal. And not once, did they [the police] say 'are you okay?'."

When the family were notified that Lois's body had been located, the young police officer put a hand on Rhoda's shoulder and said: "Look, your sister is better off this way anyway, considering the life she had."

It is a crime that is still to this day unsolved.

Lois Roberts's family wonders if things would have been different if she was white https://t.co/rwO0H8TBGK via @ABCNews

Just like countless other families that have been through the trauma of losing a loved one at the hands of another person, the pain never leaves Rhoda.

"The last thing you think of before you go to bed is the incident, and it's the first thing that comes into your mind when you wake up," she said.

"Where is the justice? My heart broke for the countless other women as well, like Tamica Mullaley and her son Charlie."

Amid her family's tragedy in 1998, Rhoda was also in the middle of planning for the Sydney Olympics 2000, specifically the Awakening Ceremony at the opening ceremony.

Reflecting on the landmark event, Rhoda said it was both a troubling and healing time in her life. 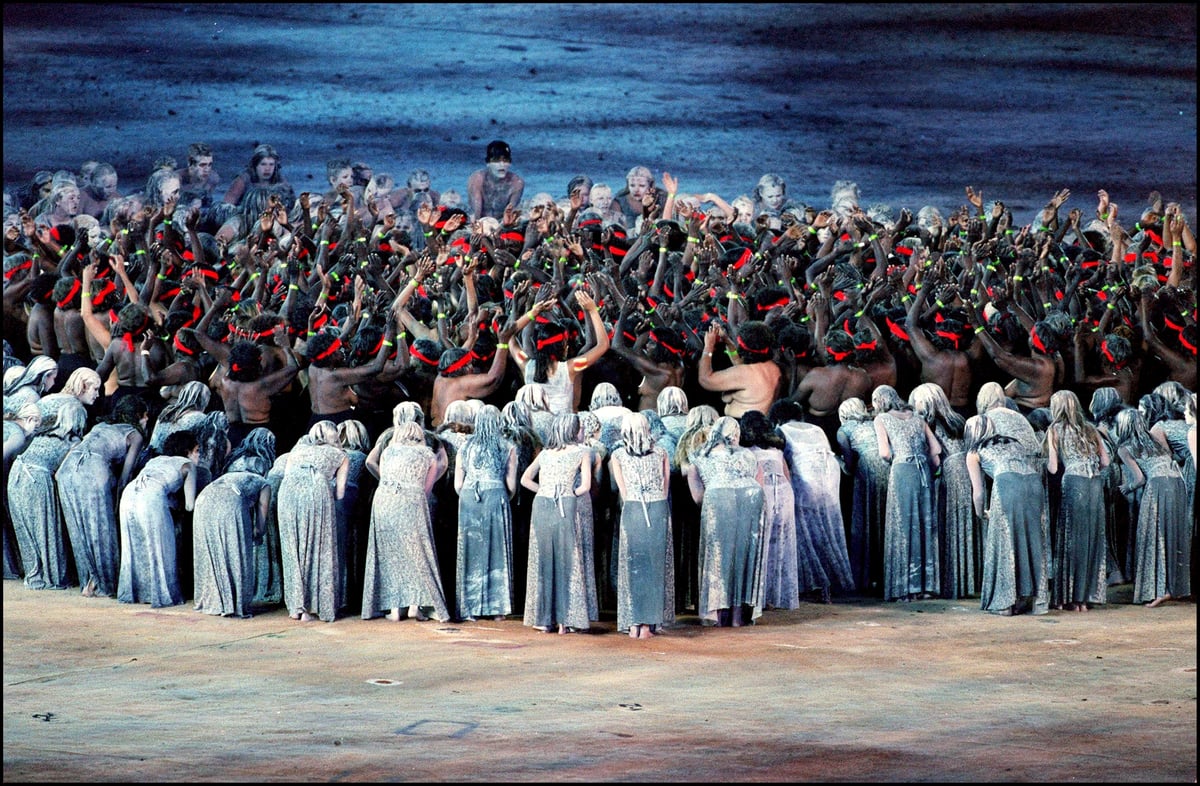 The Sydney Olympics 2000. Image: Getty. Over two thousand Indigenous performers were involved in the 11-minute ceremony, Rhoda taking years to perfect and craft the showcase.

"I realised that if we didn't take hold of it, it would be done but it would be done through a different lens: through the occupiers lens which would be very tokenistic. It wouldn't have the heart and that spirit that we bestow on people who come into our country, no matter what nation we're from," Rhoda shared on No Filter.

"It was about ensuring there were voices from our stories that needed to be told." 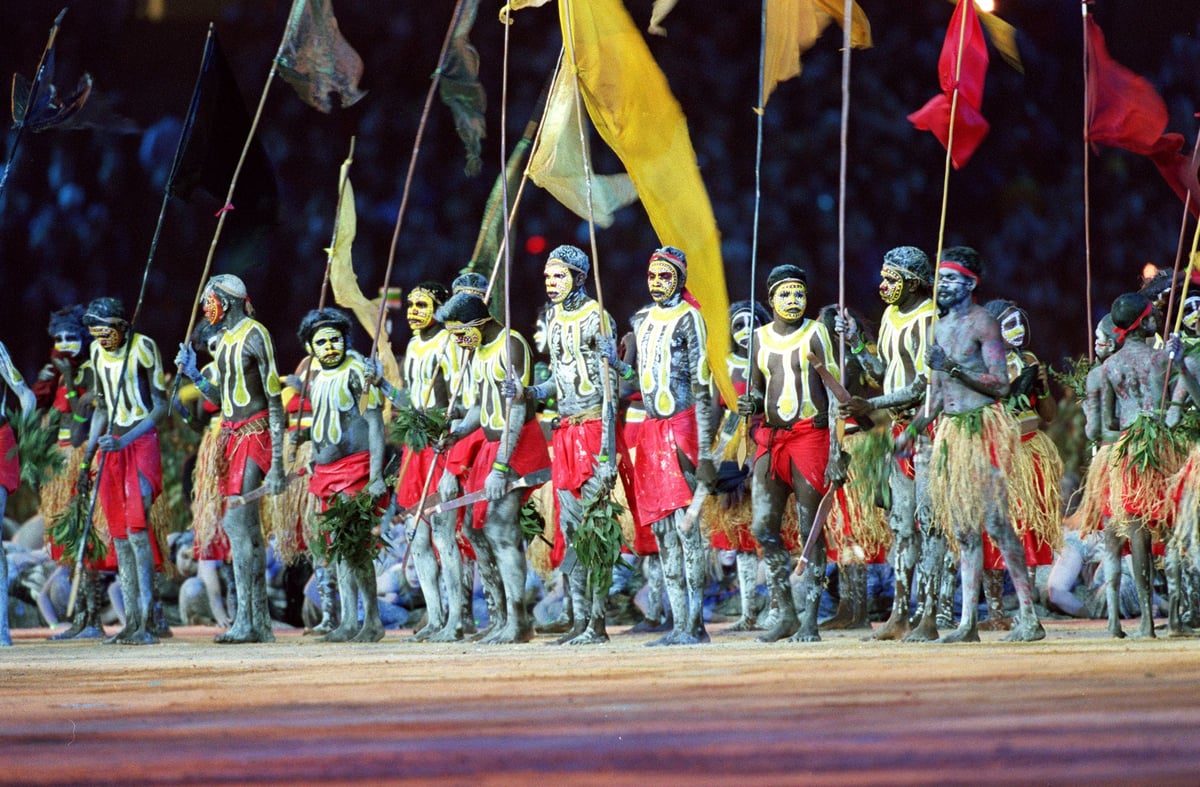 Rhoda has inspired some serious change throughout her years.

The Sydney Olympics Awakening Ceremony is front of mind, but even before that, Rhoda had coined the phrase 'Welcome to Country'. In the mid-1980s, Rhoda became passionately involved in theatre, co-founding the Aboriginal National Theatre Trust in 1988.

While running the theatre company, she and her colleagues were holding conferences where they wished to pay respect to the land they were presiding on. Once starting the movement, art organisations and galleries alike soon followed.

"We figured we were welcoming everyone to the country where we are, so I went with 'Welcome to Country' and it took off which is fabulous. People were in fact doing it across the country, we just didn't have a name then." 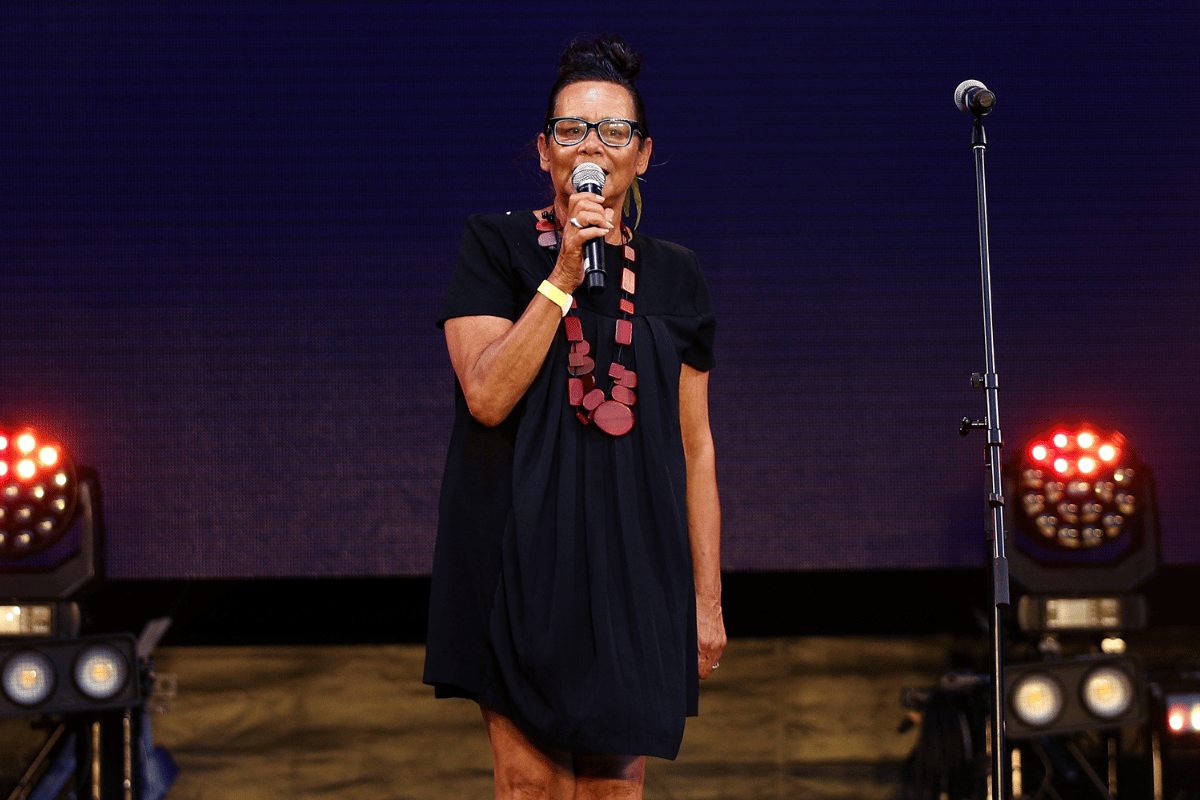 Rhoda has also served on the boards of numerous organisations such as the NSW Anti-Discrimination Board, Welcome to Country, Actors Equity and the National Aboriginal and Islander Skills Development Association.

Farewell to the extraordinary Rhoda Roberts, finishing up after a decade leading First Nations programming at the @SydOperaHouse https://t.co/0YgVWxFcue @gingerandhoney pic.twitter.com/iWxHG9icIS

Reflecting on her tenure at the Sydney Opera House, Rhoda said to NITV: "I think my greatest achievement is Badu Gili: which lights up the sails on the Opera House every night."

It is a free daily experience that explores First Nations stories in a six-minute vibrant animation projected on the Opera House's eastern Bennelong sails.

Rhoda Roberts on why January 26 is not a day to celebrate.

When posed the question by Narelda on how people should start a conversation about January 26 with those around them, Rhoda highlighted what has been lost as a result of the invasion in 1788.

"Language, culture, stories: much has been lost. When I reflect on those stories of when the boats came, and I look at January 26, I look at it with reverence, like I do with Anzac Day, and the many, many diggers, Black and white, who enabled a life for us today. January 26 is my day of mourning. It should be a national mourning and reflect where we are now," she noted on No Filter.

"I want the visibility on January 26 with our flag and our people and our dance and our ceremonies. And listen to the stories and listen deeply because if we do it together, we will be a much better nation."

In the present, Rhoda says she feels hope for the future.

"I want more Australians to go, 'Oh my God, we are host to the oldest living culture on the planet. No one else has what we have.' I also believe there is an awakening: a third pandemic if you will: there was the smallpox, the Spanish flu and now COVID. With that, people reflect on what they have and the narrative can shift."

Rhoda concluded on No Filter: "The world is changing. And often you're asked, 'what can we do?' Value our culture, come and experience it with us because it's yours as well: if you're born on this country it too was your dreaming. So have that experience."

You can now listen to Narelda Jacob's chat with Rhoda Roberts on No Filter, available here.