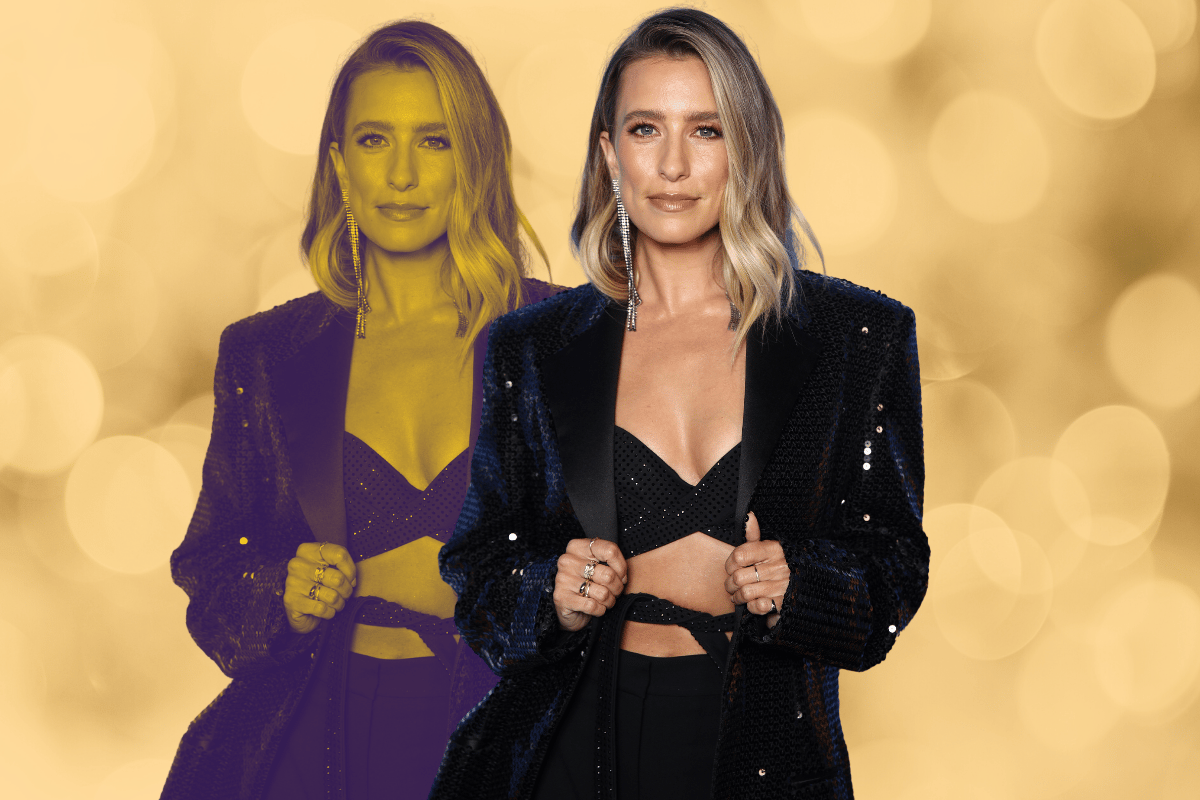 Emmy award-winning presenter Renee Bargh was one of the few kids who didn't grow up dreaming of life as a famous movie star or singer.

In fact, she didn't know those career paths were something you could daydream about.

"I grew up watching Getaway and thinking that was the dream job," the new Stan ambassador told Mamamia podcastThe Spill. "But I grew up in Mullumbimby, which is outside Byron Bay, and I didn't know how anything in that industry worked.

"I thought the people in the McDonald’s commercials actually worked at McDonald's. Entertainment was just not a thing where I grew up, so getting the job with Extra in LA was serendipitous."

After kicking off her career in an Australian pop band (aptly named Girlband), a stint as co-host of National Bingo Night on Channel Seven, and a casting agent telling her she was a terrible actress but would make a great TV presenter, Renee went on to spend over a decade working in Hollywood as Extra’s weekend co-host and correspondent.

The 35-year-old presenter has reported live from the Oscars red carpet and conducted wide-ranging interviews with everyone from Oprah to Brad Pitt - yet her introduction to Hollywood was less than glamourous.

Listen to the full interview with Renee Bargh on The Spill. Post continues after podcast.

"The day I landed in Los Angeles I got a call from my agent saying ‘can you be on a red carpet tonight to interview Russell Crowe?'" Renee said on The Spill. "If you do well, you’ll have a contract in front of you tomorrow and if you don’t, then you won’t."

"Rusell made it so hard for me," Renee continued. "Now we are friends and everything is great, but he did not make it easy for me that day so it did not go well."

"I’ve never talked about this part of it before but I was really nervous so I said something like 'I’ve just landed here from Australia and you are the first person I’ve interviewed, how cool is it that I’m interviewing another Aussie!'.

"It was at his movie premiere and then he said 'well, have you interviewed the other actors that came on this carpet?' and I said 'yeah' and then he said, 'well, I’m not your first interview then'.

"It wasn’t the greatest comment for me to make and I thought, well I should have been better. As I left, I thought 'that’s it, I’m going back to Australia'.

"My boss said it was a real baptism by fire and then they offered me a three-year contract."

Renee's longtime role with Extra meant she was standing on red carpets with the same weekly consistency that most people hit the grocery store or the gym.

And much like her first time outing with Russell Crowe, things didn't always go to plan.

"It’s not as glam as it seems," Renee said, when recalling her awards show days. "I remember being on the red carpet for my first Oscars and I was waiting for security to come and tap me on the shoulder and send me home."

"The imposter syndrome was so real, I had only been in the states for about five months so the Oscars was my first big carpet.

"You’re standing in heels for a very long amount of time because you actually have to be there hours before any of the celebrities show up.

"The big names come right at the end and then it’s just an absolute cluster of the biggest names all coming at you at once. At the same time, producers are yelling in your ear and publicists are also yelling at you saying 'don’t ask that question!'

"I’ve also had some pretty bad wardrobe malfunctions right before big interviews," Renee continued. "There was one during the Screen Actors Guild Awards that I will never forget.

"As I got out of the car, the entire back of my dress completely blew open, it was one of the worst wardrobe malfunctions ever.

"A guy I work with had to get under my dress and safety pin it all from the inside. I walked the entire red carpet with it like that, just thinking the whole time it was about to blow out again.

"I’ve also done awards shows with a broken foot, I’d be hobbling along in one heel and one boot and then have to squeeze my broken foot into a heel."

Then 2020 saw a big shift in Renee's life, as she gave up the lights of Tinseltown for a home in Byron Bay. Still continuing her work with Extra, but unable to continue her life in the US.

"The big answer is COVID," Renee said, when talking about her decision to move back to Australia.

"I was here shooting The Voice, and I only had one suitcase with me because I was planning to go back to LA.

"I’d spent February to May in lockdown in Los Angeles and then I came here and experienced how beautiful and wonderful life was. Then I just couldn't imagine getting on a plane and going back there.

"Red carpets were all canceled - everything was canceled. I was still working for Extra but it was all remote and over Zoom.

"But in Australia I realised we can touch people, we can hug. I’m also a rare person who actually likes to be around my parents and I really missed them.

"I just thought ‘what am I doing?' I’ve done ten years in the states, it’s been more than I ever wished for, but the silver lining for me here was having a bit of a reset and realising what’s important."

Part of the move to Australia includes a new role with Stan as their newest Stanbassador, where Renee will interview the stars of Stan’s biggest shows and films.

"Stan are so ahead of the game and they employ so many people within the country which at a time like now is so important," Renee said.

When it comes to the question of what to watch on Stan, Renee had three standout recommendations.

"Love Life with Anna Kendrick for sure," she said. "She’s one of my favourite actresses. Also, New York City is just such a cool city to have as its backdrop and the soundtrack for that show is incredible. I ended up downloading it on Spotify to listen to every day. And as a single woman in my thirties, I could really relate to the stories.

"I also love RuPaul’s Drag Race and I think RuPaul's Drag Race Down Under is the best. The humour that the Aussie queens bring is just on another level.

"I also love Killing Eve, I’ve watched every episode of that because it’s such a genius show. It has you on the edge of your seat and it kind of reminds me of what Dexter was back in the day. Where you are just waiting for them to be caught but you also love the protagonist."