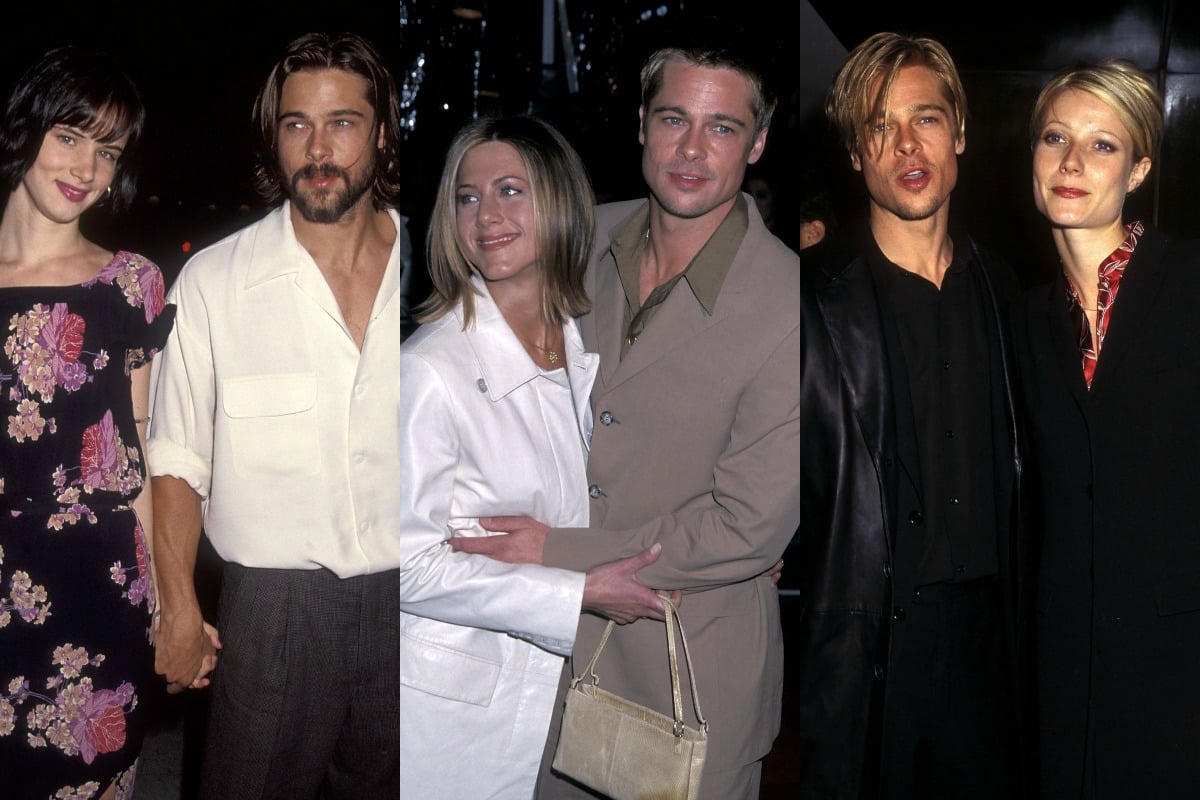 Ever since Angelina Jolie and Brad Pitt ended their marriage, the media has been awash with constant rumours about Pitt's relationship status.

In recent months, there have been (as always) rumours of a rekindling with his other ex-wife Jennifer Aniston, jokes about Tinder over awards season, and a tell-all interview on the "disaster of a personal life" that keeps him in the headlines.

This week, the 56-year-old actor has been linked to a new rumoured girlfriend, 27-year-old model Nicole Poturalski. (Yep, that's a 29-year age difference).

The pair have reportedly been enjoying a holiday in the South of France after meeting in Berlin while Pitt was on a press tour for his role in Once Upon a Time in Hollywood.

In another added layer to the story, it turns out Poturalski is actually... married.

According to Page Six, Poturalski has been married to 68-year-old German restaurateur Roland Mary for about eight years, and they have a seven-year-old son.

"He has been married several times and has five children. He is not interested in negativity or jealousy," an unnamed friend of the couple reportedly told the Daily Mail.

"They are still married but you could describe their relationship as an 'open marriage'." 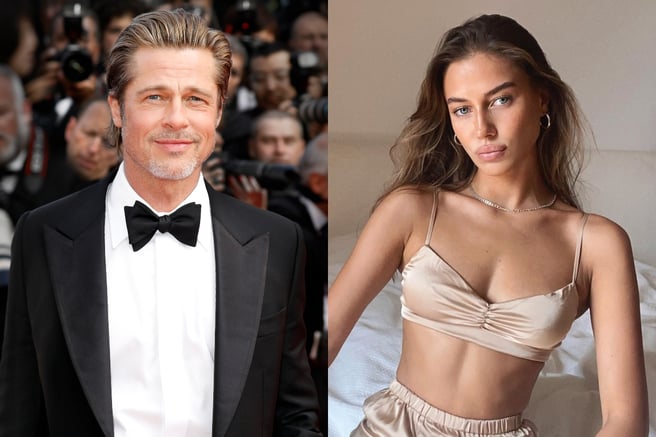 In honour of Pitt's (rumoured) new relationship, we decided to take a look back at his past relationships.

Between 1984 and 1986, British-American singer Sinitta and Brad Pitt dated on and off. The couple even attended the 1988 Smash Hits Poll Winners Party together. 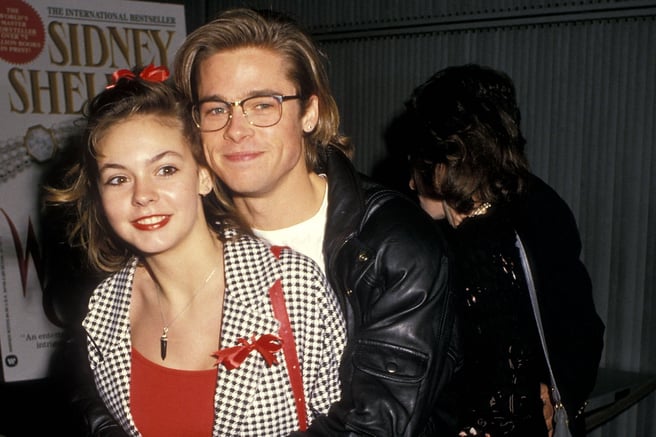 After a short stint on Dallas in 1987, Pitt, then 24, was controversially linked to his 15-year-old co-star, Shalane McCall.

Although the pair shared an on-screen kiss, their off-screen relationship wasn't confirmed. 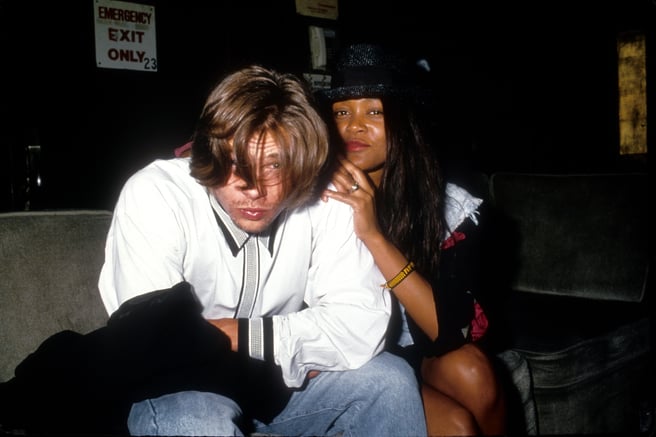 Sometime between 1986 and 1987, Pitt reportedly struck up a connection with actress Robin Givens, who went on to marry professional boxer Mike Tyson in 1988.

In his 2013 memoir, Tyson claimed that he caught Givens in bed with Pitt, and that she had an affair with the actor while they were married.

But while appearing on Watch What Happens Live, Givens denied the allegations, and shared that her relationship with Pitt began before she was married to Tyson.

"I didn’t read the book, but I was told he said he caught us in bed, which never happened. Never, ever, ever happened," Givens said. 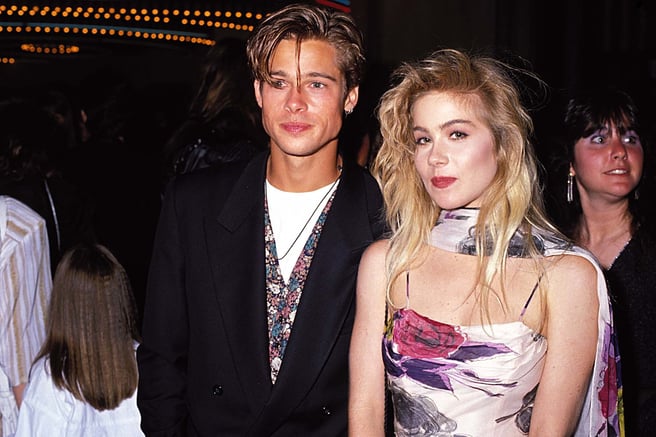 In 1989, Christina Applegate took Pitt as her date to the MTV Movie Awards.

Halfway through the night, however, Applegate famously ditched him for another man.

Although Applegate has kept quiet about who she ditched Pitt for, Skid Row singer Sebastian Bach has claimed to be the mystery man. 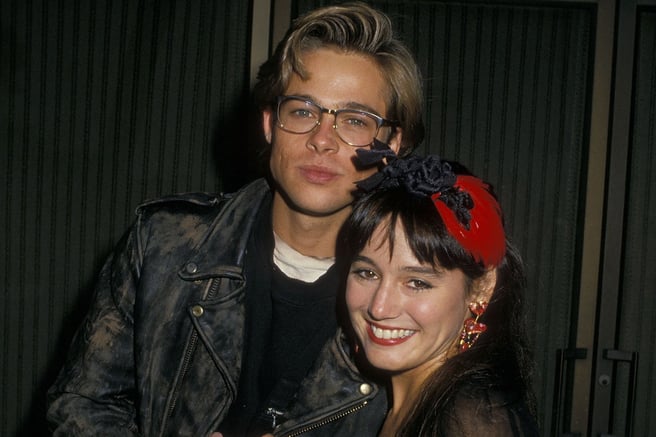 In 1989, Pitt met Jill Schoelen on the set of Cutting Class.

After briefly dating, the pair soon became engaged. But three months into their engagement, Pitt spent the last of his money on a plane ticket to Budapest, where Schoelen told him that she had fallen for the director of a movie she was working on.

"She called me up in Los Angeles and was crying on the phone. She was lonely and there was a huge drama. At this point I had $800 to my name, and I spent $600 of it getting a ticket from Los Angeles to Hungary to see her," Pitt recalled in 2011.

"I got there, went straight to the set where she was filming and that night we went out to dinner. She told me that she had fallen in love with the director of the film. I was so shocked I said, 'I'm outta here.'

"I spent my night in Budapest, sitting on a bench, smoking, with just a local bum to talk to who couldn't speak English. These are the days and nights you remember when you have success. I returned to America absolutely broke. This is why recognition does not bother me too much." 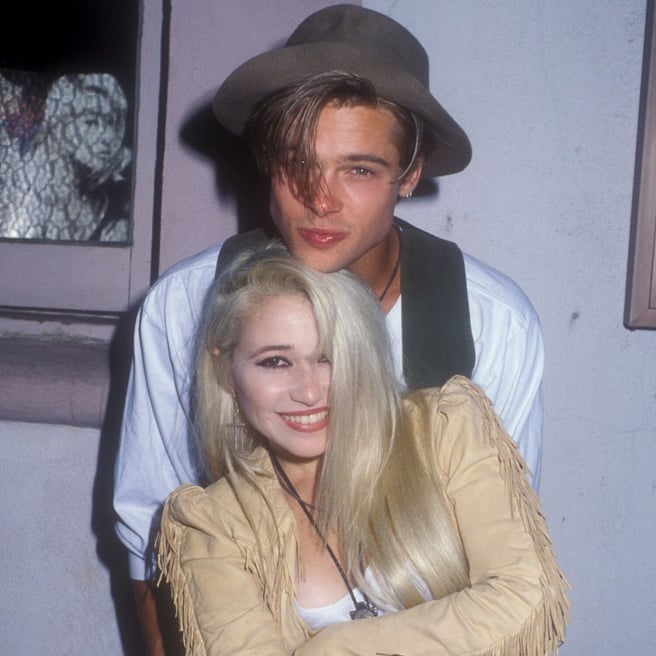 "He's very laid back, very earthy. He's the kind of guy that would pick up and leave and drive his car just to get out of the city," Daily recalled in 2016.

"He was never someone that was super Hollywood, he was a very calm and gentle guy." 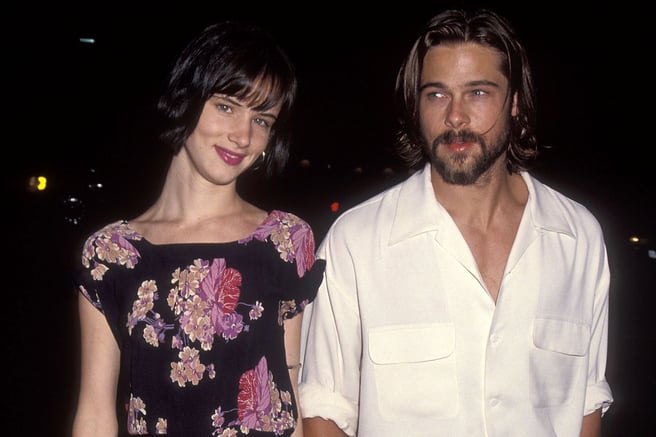 "We met on a movie of the week and started dating when it was over. I already liked him as an actor, plus you gotta respect somebody who’s in the same field as you," Lewis told Los Angeles Times in 1993.

"We’re like at the point in love, where we just like to see each other every single day and we don’t get bored with each other, so it’s really, really nice. Also, we get to be around each other when we’re working and talk and collaborate. We want to work together again and again and again."

Despite their controversial 10-year age gap, the pair dated for three years.

"He’s not in my universe at all now. It seems like a high-school relationship because now he’s a very famous person. I look at this person that I shared a bit of history with. I hope he finds happiness because I genuinely loved him. He’s a very stand-up, good guy. It was my longest relationship, and we both lost our anonymity together," Lewis told The Guardian in 2006.

In an interview with Vanity Fair in 1995, Pitt referred to their relationship as "one of his greatest".

After appearing in Thelma & Louise together, Pitt reportedly met up with actress Geena Davis in secret for over a year.

In 1994, Pitt briefly dated Thandie Newton after they met on the set of Interview With The Vampire. 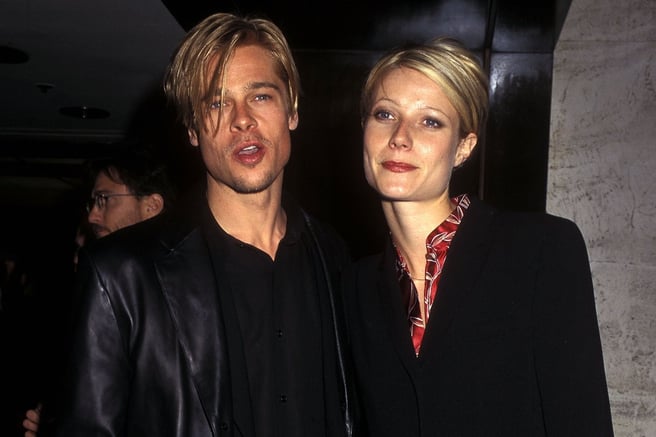 Between 1994 and 1997, Pitt dated Gwyneth Paltrow, who he met on the set of the thriller Seven.

Pitt proposed to Paltrow in 1996, before the couple ended their relationship seven months later.

"I definitely fell in love with him. He was so gorgeous and sweet. I mean, he was Brad Pitt! My father was devastated [when we split]. I was such a kid, I was 22 when we met. It's taken me until 40 to get my head out of my ass. You can't make that decision when you're 22 years old. I wasn't ready, and he was too good for me," Paltrow said in 2015. 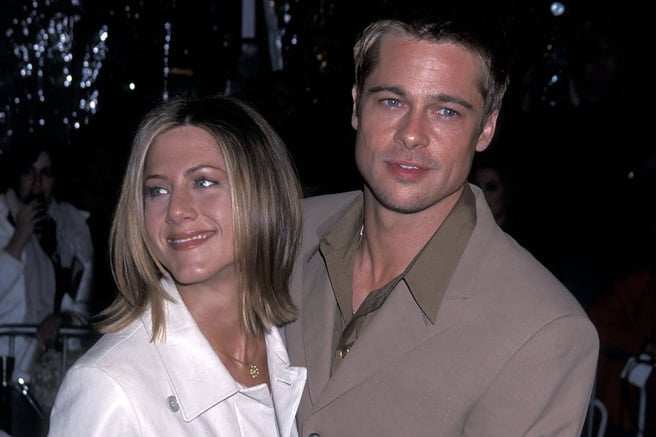 Brad Pitt and Jennifer Aniston first met in 1998 in the most Hollywood way possible – through their publicists.

At the time, the pair were seen as the ultimate noughties couple. But within a few years, it all came crashing down.

In 2004, Pitt signed on to make Mr and Mrs Smith alongside Angelina Jolie.

As filming for the movie began, rumours of an affair started and within just a few months, Pitt and Aniston separated.

Within just a couple of months, Pitt and Jolie became an official couple and were soon photographed at home together for W Magazine.

In an interview with Vanity Fair, Aniston admitted that she was "shocked" to see intimate photos of Pitt and Jolie in W Magazine, just months after their separation. 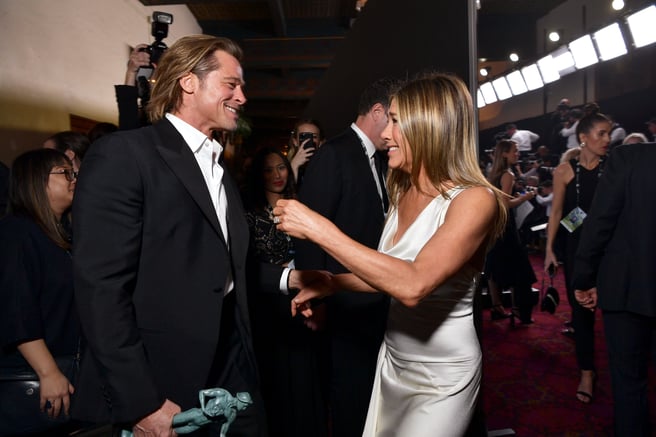 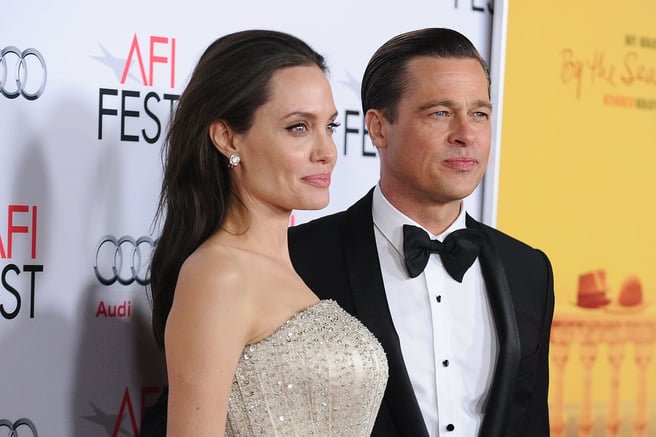 Pitt's relationship with Angelina Jolie began after the pair met on the set of Mr and Mrs Smith.

At the time, Jolie had recently adopted her first child, Maddox, from an orphanage in Cambodia.

Jolie adopted a daughter, Zahara, from an orphanage in Ethiopia in July 2005, just a few months after Pitt and Aniston announced their separation.

Then, three months after Aniston and Pitt's divorced was finalised, Pitt and Jolie announced that they were expecting their first child together in January 2006.

In the same month, the couple also got a judge to grant Pitt legal adoption of Jolie's two children, Maddox and Zahara.

In May 2006, their first biological child, Shiloh Jolie-Pitt was born, before the pair adopted their fourth child, son Pax from Vietnam in March 2007.

A few years later, in May 2008, the couple attended the Cannes Film Festival together, where they confirmed they were expecting twins.

By July, Knox Leon and Vivienne Marcheline were born. 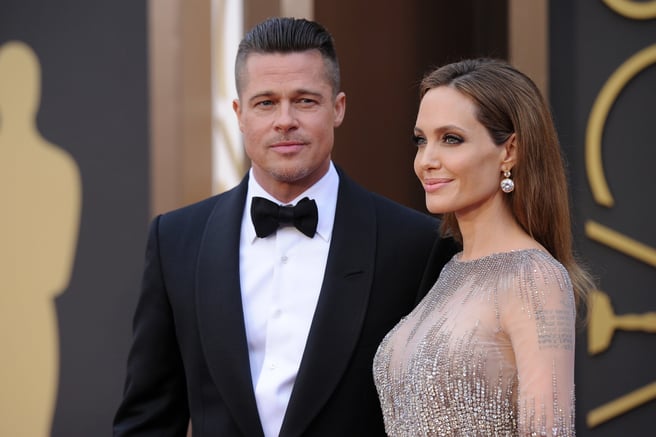 After announcing their engagement in April 2012, the couple married at the Chateau Miraval in France on August 23, 2014.

Then, after just over two years of marriage, Jolie filed for divorce on September 20, 2016, citing "irreconcilable differences". She asked for full custody of their six children.

By 2018, a new custody agreement was established between the former couple, before their divorce was finalised in April 2019.