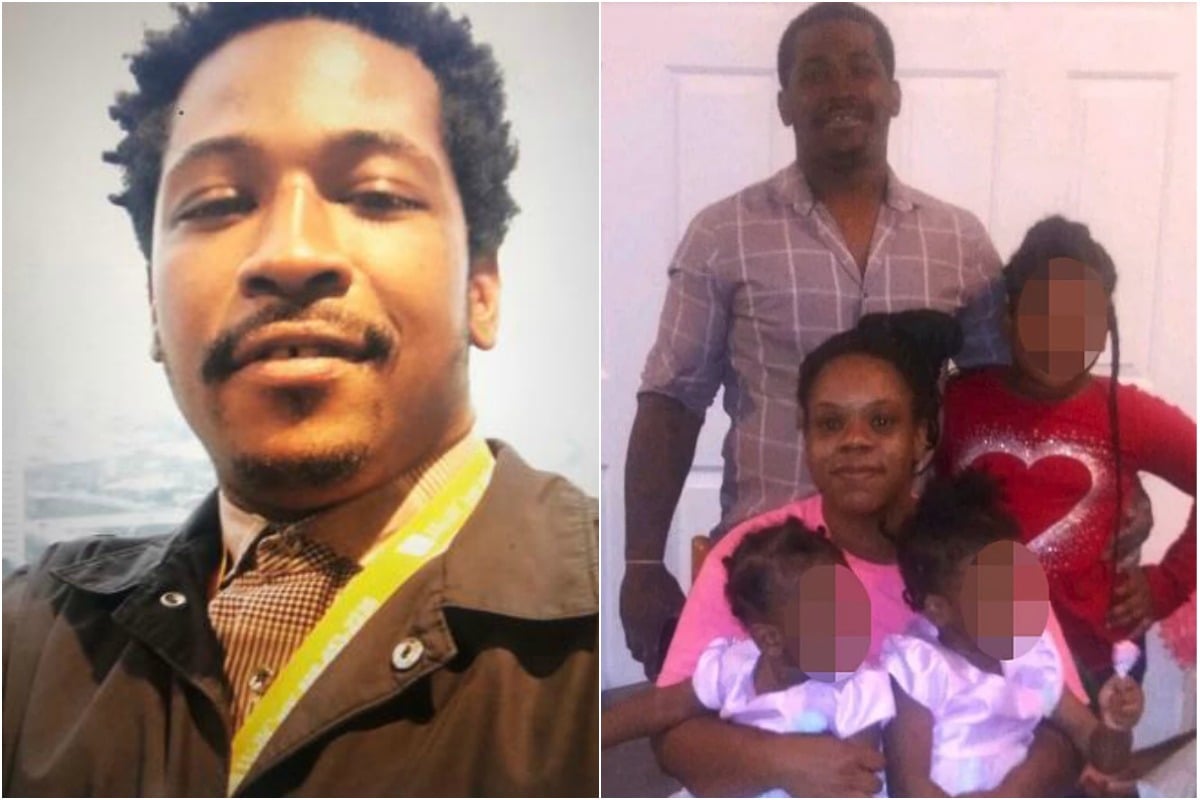 On Saturday morning, Rayshard Brooks' eight-year-old daughter, Blessing, was dressed and waiting for her dad to pick her up for her skating birthday party.

But Brooks never arrived. He was shot and killed by the police the night before in a Wendy's drive-through in Atlanta. His death reignited protests against racial vilification, that started 19 days earlier with the death of another unarmed black man at the hands of police.

Footage from the scene shows the 27-year-old cooperating politely with police seconds before he is gunned down.

WARNING: Brooks' death is included in the below footage. Post continues after video.

The body cam footage from the Rayshard Brooks incident has been released. pic.twitter.com/BnJDZxgIR3

At 10:30pm on Friday night, a Wendy's employee called police about a man who was passed out in his car in the restaurant's drive-through, blocking customers.

A slightly groggy Brooks is seen on police bodycam footage, explaining to the attending officers that he wasn't feeling 'well' enough to drive, so he parked his car and fell asleep. 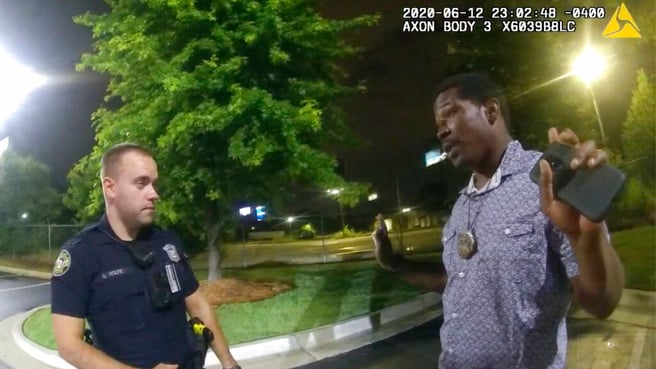 For more than 20 minutes, Brooks chats to police, while undertaking a series of sobriety tests. He tells them about his daughter's birthday, and his recent visit to his mum's gravesite. The conversation is cordial, polite and measured.

According to the video, the breathalyser Brooks' takes comes back with a registered blood-alcohol level of .108 per cent, slightly above the legal limit of .08 per cent.

"Alright, I think you've had too much drinks to be driving so can you put your hands behind your back for me," officer Garrett Rolfe orders.

It is as Rolfe attempts to handcuff him that Brooks suddenly starts struggling and within minutes he is on the ground wrestling with two officers on top of him.

A police dashboard camera video shows officer Devin Brosnan drawing his yellow stun gun and threatening, "You're going to get tased, your going to get tased" as Brooks can be heard yelling "Mr Rolfe, come on, man".

Brooks manages to wrestle the stun gun off Brosnan and scrambles to his feet and fires the taser back at police as they fire another one at him.

As he runs away across the carpark, Rolfe lets out three shots, killing him.

Protests erupt over "unnecessary use of force".

On Saturday, Atlanta Mayor Keisha Lance Bottoms said she did not believe Brooks' death was a justified use of deadly force.

"While there may be debate as to whether this was an appropriate use of deadly force, I firmly believe that there is a distinction between what you can do and what you should do," Bottoms said.

JUST IN: Atlanta Mayor Keisha Lance Bottoms announced the resignation of police chief Erika Shields and called for the termination of the officer responsible for fatally shooting Rayshard Brooks at a Wendy’s drive-thru on Friday night pic.twitter.com/dJakKpahyM

Officer Garrett Rolfe has been fired and Officer Devin Brosnan has been placed on administrative duty. Both are facing possible charges of murder, felony murder and involuntary manslaughter.

In a press conference over the weekend, attorney L. Chris Stewart said witnesses described that “the officers went and put on plastic gloves and picked up their shell casings after they killed him – before rendering aid."

"They appear to be caring more about covering their tracks than providing aid." 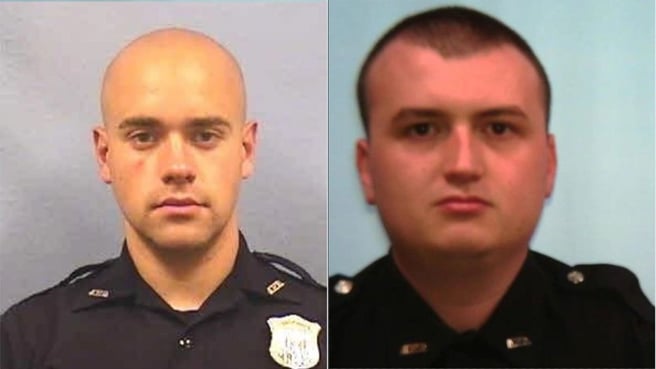 Officer Garrett Rolfe has been fired, and Devin Brosnan has been reassigned following the death of Rayshard Brooks. Image: Atlanta Police Department.

Stewart added that, "In Georgia, a taser is not a deadly weapon. That's the law. I've had cases where officers have used tasers on victims and they argue with us in court, that tasers are not deadly... that tasers aren't harmful. That's the case law here. So you before their lawyers say it, you cannot have it both ways."

On Saturday night, enraged protesters burnt down the Wendy's where Brooks was killed and others took over a nearby interstate highway. 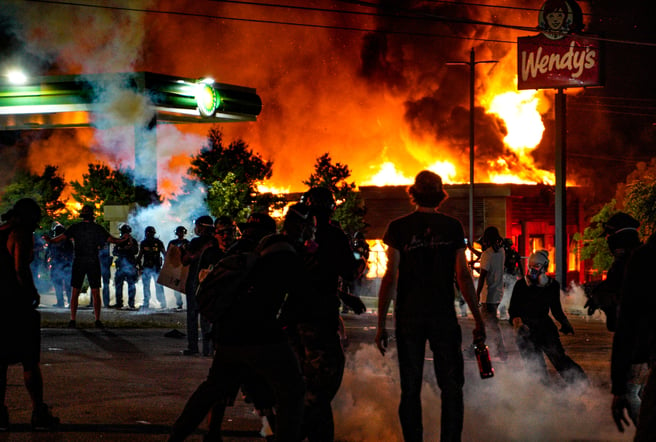 About 1000 protesters gathered outside the burning Wendy's. Image: Ben Hendren/Anadolu Agency via Getty.

At least 36 people were arrested during the protests, with demonstrators telling CNN: "obviously we're still not heard".

The family Brooks leaves behind.

Rayshard Brooks was a married father-of-four with three girls of his own, Blessing, eight, Memory, two, Dream, one, and a 13-year-old stepson, Mekai.

"He was a great father, a great husband. He believed in peace, he believed in love," his wife Tomika Miller told ABC news.

"He was a beautiful spirit. He was a fighter. He loved his family. He wanted to be home with us. He wanted to make it home to us."

Tomika explained that one of the most heartbreaking parts about losing her husband was feeling like a statistic.

"I feel like I'm stuck being a single black parent. I'm being forced to do it by myself. This was not a choice. They took my husband away. They destroyed my family. No justice will ever get that back. This is another black family being broken." 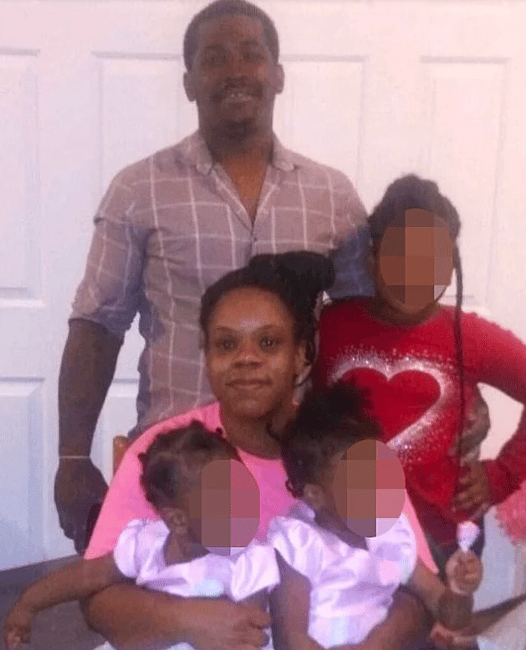 Rayshard Brooks, his wife and their three girls. Image: GoFundMe.

Speaking to CBS, an emotional Tomika said "I want them to go to jail," referring to the officers who shot her husband.

"If it was my husband who shot them, he would be in jail. He would be doing a life sentence. They need to be put away.

Blessing had been excited about celebrating her birthday on Saturday, with the family's attorney telling a news conference: "They had a birthday party for her... with cupcakes. While we were sitting there talking to her mom about why her dad's not coming home".

A day earlier, the little girl had enjoyed other celebrations with her dad, with Brooks taking her to get her nails done, to the arcade and out for a meal.

Brooks worked in a Mexican restaurant, and his former workplace Ark Restoration described him on Instagram as, "one of the hardest working employees we ever had. There was nothing we asked him that he wouldn't do...,our clients loved him and would ask about him often".

A GoFundMe has been set up by the Brooks' family attorneys and has already raised $43,000.

You can find it here.