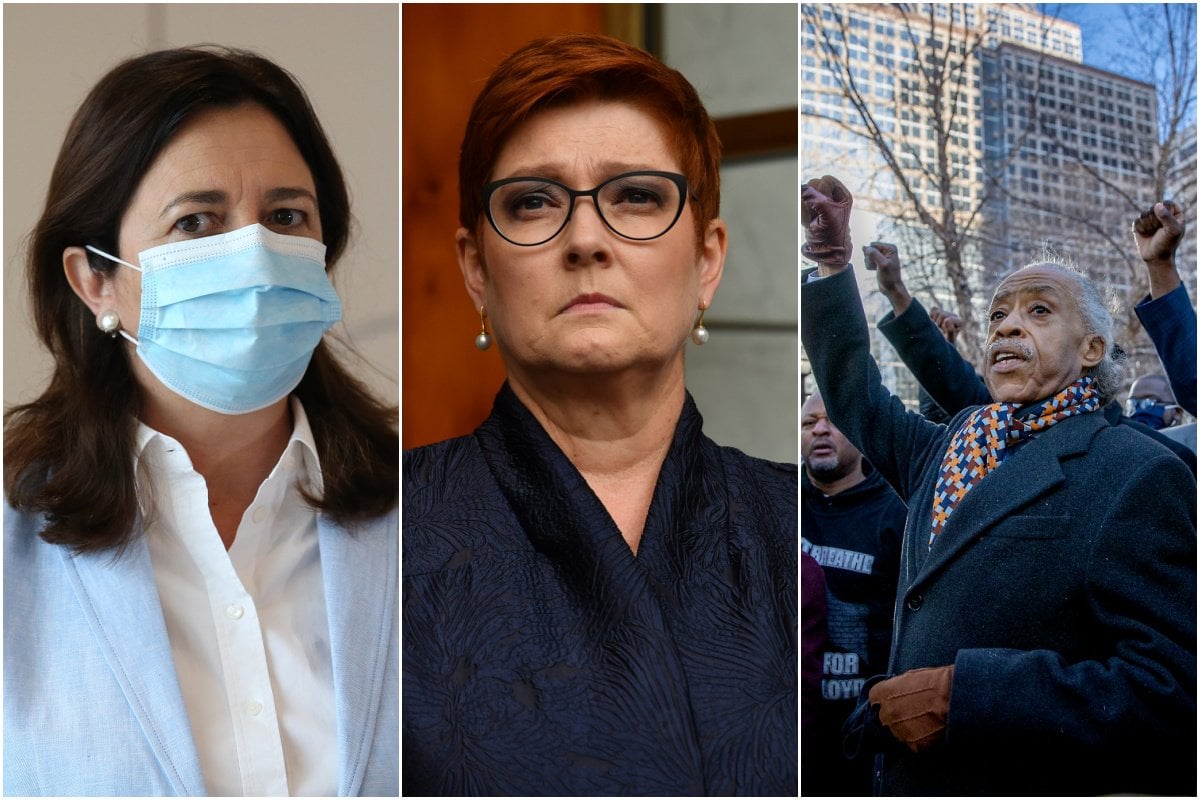 Queensland has recorded eight locally acquired cases of COVID-19, after Greater Brisbane woke to the first morning of what is hoped will be a 'circuit-breaker' lockdown.

Six are close contacts of confirmed cases. Two are currently under investigation but officials believe they are also linked to the two people.

"We now believe that there are two distinct clusters. So, we have a cluster linked, of course, to that PA doctor. And we have a second cluster linked to the PA nurse. So, close contacts of both of those clusters," Queensland Premier Annastacia Palaszczuk said.

Chief Health Officer Dr Jeannette Young said the nurse's infection has exactly the same genome has the man who presented at a Brisbane Hospital on March 22.

"So, after the nurse worked in the COVID ward. She did do a shift on the night of 23 March, so that shift started 10:00pm that night, she worked through the night into the next day on the 24th.

"So, my hypothesis - and this all has to be tested, this all has to be checked out, this is very preliminary information - is that she has acquired the infection when at work that night. Now, I don't know whether she's got it directly from that patient, because she wasn't working with COVID cases that night, but we have to confirm that, or whether she's got it from someone else in the hospital."

The snap three-day measures including mask restrictions across the state are scheduled to be reviewed on Thursday ahead of the Easter break.

BREAKING: The Greater Brisbane region is now in lockdown for three days.

I know this is difficult, but it's the right thing to do based on the health advice.

For now, I want to say thank you to all of you for staying home.

Premier Annastacia Palaszczuk is hopeful the lockdown of an area with about 2.5 million people will give contact tracers the opportunity to track down all those potentially infected.

"This is a huge job now that we have to do because we've got more of this community transmission," she said on Monday.

Holiday plans are in disarray as states and territories imposed strict border measures in response to the Brisbane cluster.

Western Australia has closed its border to the entire state of Queensland, while Tasmania, South Australia and Victoria have shut out Greater Brisbane travellers.

Anyone from Greater Brisbane must isolate and get tested upon entering the Northern Territory and the ACT.

In NSW, people who have been in the lockdown area since March 20 are now subject to the same stay-at-home restrictions as Greater Brisbane.

The ABC is reporting that NSW Nationals MP Michael Johnsen offered a sex worker $1000 to attend state parliament for sex and sent the woman a string of lewd text messages and an obscene video while parliament was in session.

Johnsen has denied allegations made in NSW Parliament last week that he sexually assaulted the woman at a lookout in the Blue Mountains in 2019.

The woman has told the ABC Johnsen told her "I'm in politics, I'm an MP" and he could only do "daytime meets on weekdays."

She says Johnsen invited her to attend NSW Parliament and have sex in his office telling her to "come to the Jubilee Room and wait for me there."

She cancelled that meeting because she injured herself, and the next meeting they organised is where she alleges she was sexually assaulted.

Dealing with the low conviction rate in rape cases will be a high priority for a new cabinet-level body headed by Prime Minister Scott Morrison and Minister for Women Marise Payne.

Mr Morrison announced on Monday a record seven women would be in his reshuffled cabinet, all of whom would sit on a task force to focus on women's equality, safety, economic security and health.

One of the key issues raised during the recent debate on the treatment of women has been the low rate of convictions following allegations of rape made to police.

Studies have found in almost nine out of 10 cases, women who have experienced aggravated sexual assault by a male did not contact the police, for a range of reasons.

Of those incidents that do get reported, fewer than a third lead to an arrest, summons, formal caution or other legal action.

Senator Payne said there was more work at a state and federal level to be done on the "difficult process" of pursuing criminal justice in cases of sexual assault.

"We will be endeavouring to bring those jurisdictions with us in that conversation to make sure we can address those concerns and remove the barriers that exist," she said.

"The phase that we hear often is: 'I didn't think I would be taken seriously'.

Labor frontbencher Tanya Plibersek said there were a pile of reports sitting on the prime minister's desk dealing with women's safety.

"So much of the work has been done. So many recommendations have been made. What we've really been lacking is a government willing to act on them," she said.

"It almost smacks of him pushing the 'girly' business to the women - 'here you go ladies, you look after this messy stuff, and us blokes can get on with the superior stuff'. It won't cut it." #TheDrum pic.twitter.com/U1YyQmcCYT

Dr Laming will not contest the next election but will remain in the coalition party room after admitting to bullying, stalking and harassing several women.

The Queenslander is also under fire for taking a photo of a woman whose underwear was showing as she bent over in the workplace, which is a criminal offence punishable by up to three years in prison.

The woman and a witness to that incident on Monday told Nine News they had initiated a complaint with Queensland Police.

Dr Laming claims the photo attempted to show someone trying to fit an impossible amount of stock into a fridge.

Mr Morrison said the MP for Bowman had committed to undertake a behavioural course.

Liberal senator Sarah Henderson says Dr Laming should be booted from the coalition, which would plunge the government into minority.

Criminal charges against missing Sydney con-woman Melissa Caddick will be dropped by the corporate watchdog, five weeks after her badly decomposed foot washed up on a beach.

A warrant for the 49-year-old's arrest had been issued on behalf of the Australian Securities and Investments Commission, who had laid almost 40 charges against Ms Caddick.

The charges will be formally withdrawn in Sydney's Downing Centre Local Court on Tuesday.

The fraudster went missing last November, a day after ASIC executed a search warrant at her eastern Sydney mansion.

Criminal charges against Melissa Caddick to be withdrawn https://t.co/MTWaKE7bvK

A report released last week into her financial affairs indicated she had likely misappropriated about $25 million of investors' funds.

The only remains that have been found are her decomposing foot, which washed up in a running shoe on a beach about 400km south of Sydney.

ASIC confirmed the charges would be withdrawn, as had the warrant.

"It is not for ASIC to determine if, or speculate on whether, Ms Caddick is alive. That is a matter for the NSW Police and – should it come to that – a coroner," a spokeswoman for ASIC told AAP.

However, NSW Police Commissioner Mick Fuller has said he is satisfied Ms Caddick is dead.

Civil proceedings against Ms Caddick and her company Maliver continue.

A joint World Health Organization-China study on the origins of COVID-19 says transmission of the virus from bats to humans through another animal is the most likely scenario for its emergence.

The possibility of a lab leak was "extremely unlikely", according to a draft copy of the study's findings obtained by The Associated Press.

The findings were largely as expected and left many questions unanswered. The team proposed further research in every area except the lab-leak hypothesis.

It's 'very likely' that COVID-19 first spread to humans from bats via another animal, WHO report finds https://t.co/P1hTi1bDwt

The report's release has been repeatedly delayed, raising questions about whether the Chinese side was trying to skew the conclusions to prevent blame for the pandemic falling on China.

The AP received what appeared to be a near-final version on Monday from a Geneva-based diplomat from a WHO-member country.

The researchers listed four scenarios in order of likelihood.

They concluded that transmission through a second animal was 'likely to very likely'. They evaluated direct spread from bats to humans as 'likely', and said spread through 'cold-chain' food products was possible but 'not likely'.

Former Minneapolis policeman Derek Chauvin squeezed the life out of George Floyd while joining other officers in arresting him last May, a prosecutor has told jurors in his opening statement at Chauvin's murder trial in a heavily fortified US courthouse.

Chauvin's lead lawyer, Eric Nelson, said in his opening statement on Monday that the former officer followed his police training.

Jerry Blackwell, a prosecutor with the Minnesota attorney general's office, told jurors that officers who wear the Minneapolis police badge pledge to never use "unnecessary force or violence".

George Floyd's family and their attorneys knelt at the courthouse for 8 minutes 46 seconds to mark his death ahead of the start of Derek Chauvin's trialhttps://t.co/S4k0NHznLD pic.twitter.com/Aeuf9TfVVU

"You will learn that on May 25, Mr Derek Chauvin betrayed this badge when he used excessive and unreasonable force upon the body of George Floyd," said Blackwell, who addressed the jury for just shy of an hour.

He displayed a still image from a bystander's mobile phone video of Chauvin, who is white, with his knee on the neck of Floyd, a 46-year-old black man in handcuffs, saying it showed Chauvin "grinding and crushing him until the very breath — no, ladies and gentlemen — the very life was squeezed out of him". 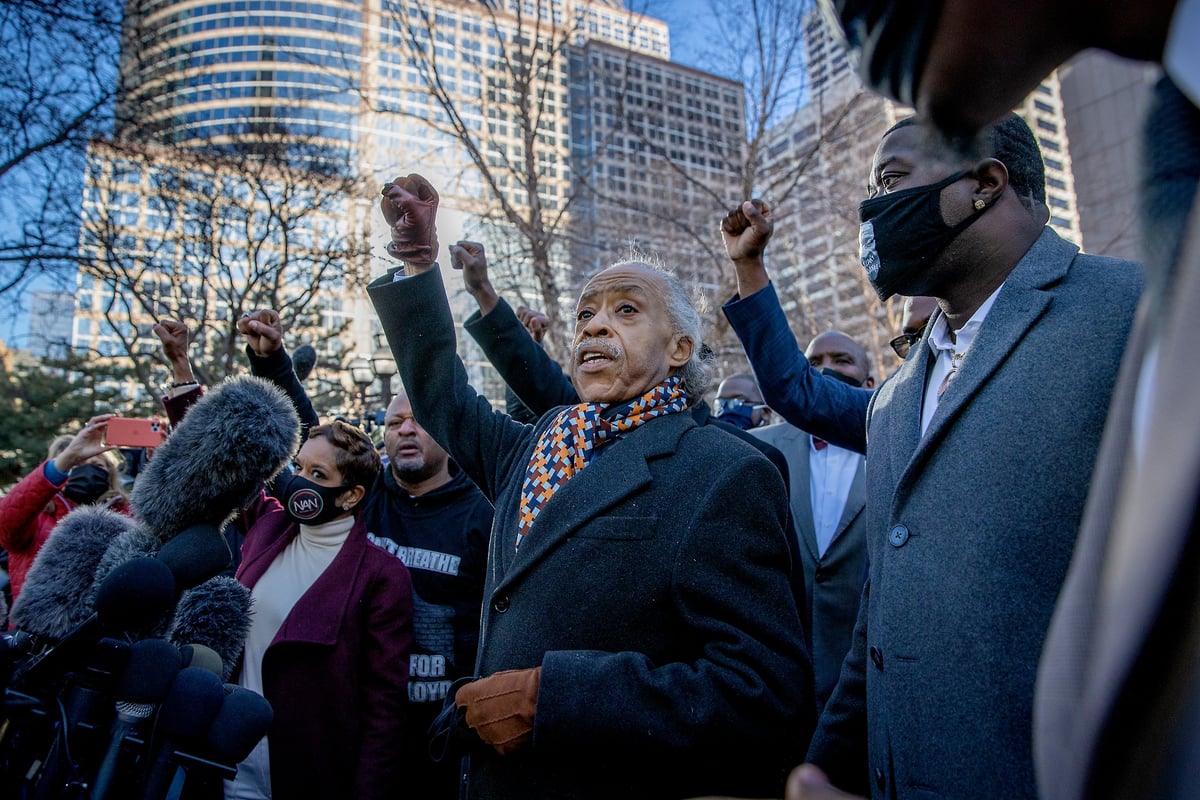 Egypt's Suez Canal is set to reopen for shipping traffic in both directions after a giant container ship which had been blocking the busy waterway for almost a week was refloated, with more than 400 ships waiting to pass through.

The Suez Canal Authority's chairman Osama Rabie said the channel was navigable after the 400-metre-long vessel Ever Given was freed undamaged earlier on Monday.

"The ship came out intact and it has no problems. We've just searched the bottom and soil of the Suez Canal and thankfully it is sound and has no issues, and ships will pass through it today," he told Nile TV.

The giant container ship that blocked the Suez Canal for almost a week was fully floated, and traffic in the waterway resumed, the canal authority said in a statement https://t.co/skxfODdbom pic.twitter.com/LjWQVCfioW

The authority informed shipping agencies that convoys of ships will resume running both ways through the canal from 7pm on Monday, two agents told Reuters.

The Ever Given had become jammed diagonally across a southern section of the canal in high winds early last Tuesday, halting traffic on the shortest shipping route between Europe and Asia.

At least 400 vessels are waiting to transit the canal.

- India has reported its highest daily increase in coronavirus cases in five months, with 68,000 cases reported in 24 hours.

- Human Rights Watch has urged Qatar to end male guardianship laws that it says limit women's ability to make key decisions based on their basic rights.