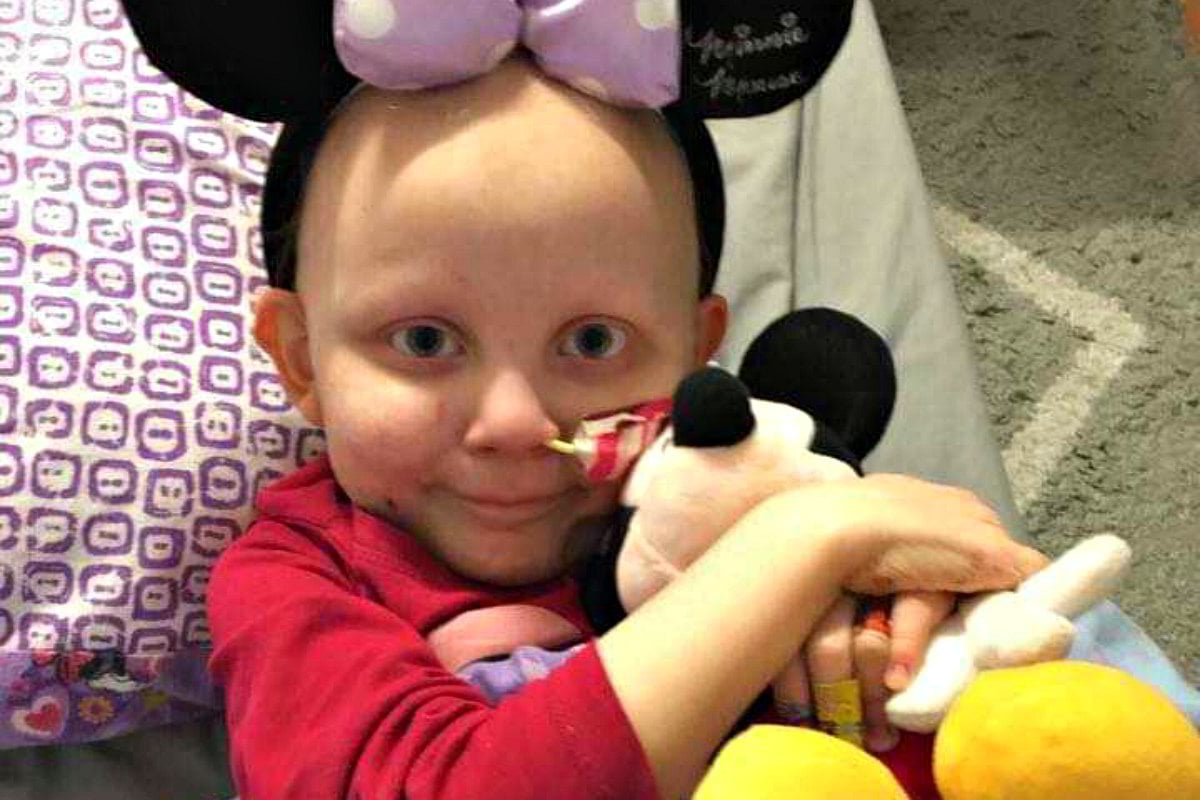 Last weekend, Lismore father Brad Jones got to see his four-year-old daughter and his partner for the first time in a month.

Their reunion only lasted two hours, and he doesn't know when it will happen again.

That's all in the hands of Queensland health officials.

Watch: Premier Palaszczuk: "I know exactly what people are going through."

Brad's little girl, Charlotte, is undergoing treatment for T-cell acute lymphoblastic leukemia at Queensland Children's Hospital, where she was rushed after her diagnosis in January.

Mother, Melissa, has been by her bedside while Brad remains with their four other children, roughly two hours away in the NSW Northern Rivers city of Lismore.

Between them lies a closed state border, a line of defence against COVID-19 imposed by the Queensland government on August 8.

On that date, Brad's regular visits stopped. And when Charlotte was rushed to the ICU late last month and stopped breathing twice, Brad was stranded at home, utterly helpless.

"It was just gut-wrenching, because I couldn't just get in my car and drive up there," he said.

"It really hit me hard. I try not to show too much emotion in front of the kids — I know you can, but I just try to stay strong for them. So I went and got in the shower and absolutely bawled." 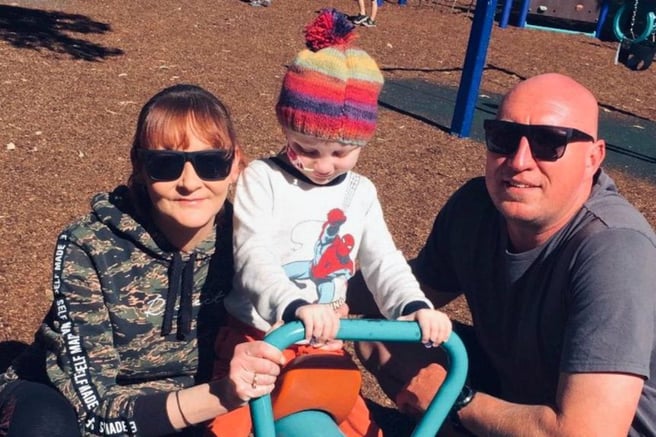 Three weeks after applying for a border exemption, and amid local media attention, Brad was granted a one-off visit last Saturday — the eve of Father's Day.

"It was only a two-hour visit, and I was happy with that. I want to see her, no matter what," he said. "And I abided by all their rules."

He was met in the hospital carpark by security staff and a nurse, who led him to a room where he was fitted for PPE. When he finally saw his little girl she was sedated after suffering a seizure the night before. She was covered in bruises, a product of her struggling liver, and fluid had bloated her little body.

"When I walked into the room, I couldn't believe it. I was absolutely shocked," he said. "It just made me go straight to tears. And then seeing my partner, who'd been there the whole time, not having anyone to help, or to reach out to for a cuddle...

"I just couldn't stop crying all the way back home."

Brad is now calling on the Queensland Government to allow him and his family to cross the border and stay in cancer care accommodation together.

"I applied again for an exemption, but I haven't heard anything back," he said.

"They just need to show a bit more compassion. Where we're from, here on the Northern Rivers, there are no cases whatsoever... It's just so unfair." 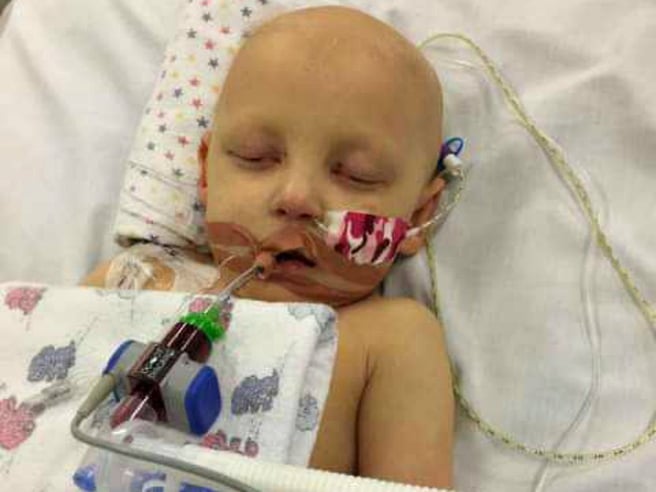 Brad's story is one of many to have surfaced in recent weeks, as political tensions over Queensland strict border policy have intensified.

Under current rules, no one from NSW, Victoria or the ACT is permitted to enter the state.

Prime Minister Scott Morrison even weighed in this week, after a Canberra woman was denied an exemption to attend her father's funeral in Brisbane. Sarah Caisip, 26, was only permitted to have a private viewing of the casket after the service concluded for which she was clad in full PPE.

Queensland authorities yesterday also reached an agreement with the family of Mark Keans, a terminally ill 39-year-old who gained national attention after only one of his Sydney-based children was granted an exemption to cross the border to say goodbye.

All four will now be able to make the trip courtesy of a backflip by Queensland authorities and an online fundraiser that attracted over $200,000 in donations — more than 13 times that needed to cover the associated travel and quarantine fees.

The Prime Minister's office confirmed to 9News that he was among the donors, with a personal contribution of $1,000.

Queensland Premier Annastacia Palaszczuk is standing strong on the border policy, which she's reiterated is working and is necessary for "keeping Queenslanders safe".

There are no easy decisions in a global pandemic.

We know it's tough on families.

But our border measures are in place to save lives and protect Queenslanders. pic.twitter.com/ytz2e2EGXd

But in a press briefing on Friday, the premier's voice cracked with emotion as she acknowledged the families kept apart as a result.

"These are difficult decisions, and they’re heartbreaking. These issues hurt me deeply. They hurt me deeply because during this pandemic I have lost loved ones as well. I know exactly what people are going through."

Exemptions decisions are made by a staff of roughly 80 officials under the guidance of the Chief Health Officer. Although Premier Palaszczuk has pledged to add more people to the team.

"They're having to go through all of the details and make really difficult and tough decisions," the premier said. "But this is happening in other states as well. It's happening around the world. It is absolutely tragic. It is heartbreaking."

Little Charlotte Jones has shown some signs of improvement since Brad's last visit, but is still in ICU experiencing unexplained temperature spikes.

Brad expects her treatment to continue until beyond Christmas; hopefully then she'll be able to return to Lismore. In the meantime, he'll be video-calling her regularly, hoping for positive news about his application or an easing of restrictions.

"We've never really been apart before, ever," he said. "I'm just heartbroken."

Reply
Upvote
1 upvotes
This is tragic, but the fault lies with all the people applying for exemptions who don’t need to enter the state, the people who lie to escape lockdown, and the original travellers who didn’t self isolate.
Covid facts
Funerals are super spreader events.
Asymptomatic visitors can devastate  a hospital.
G
guest2 a year ago

Reply
Upvote
@grumpier monster  exemptions are made, only one has to be wealthy and or well connected.
C
cat a year ago

Reply
Upvote
1 upvotes
@guest2 no one has had an exemption from quarantine. If they let this guy walk into the hospital without quarantine and he spread coronavirus through the oncology ward you’d be apoplectic with rage about Anastasias incompetence.
G
guest2 a year ago

Reply
Upvote
1 upvotes
@cat my commentrefers to border exemptions to enter the state, not from having to do quarantine.
C
cat a year ago